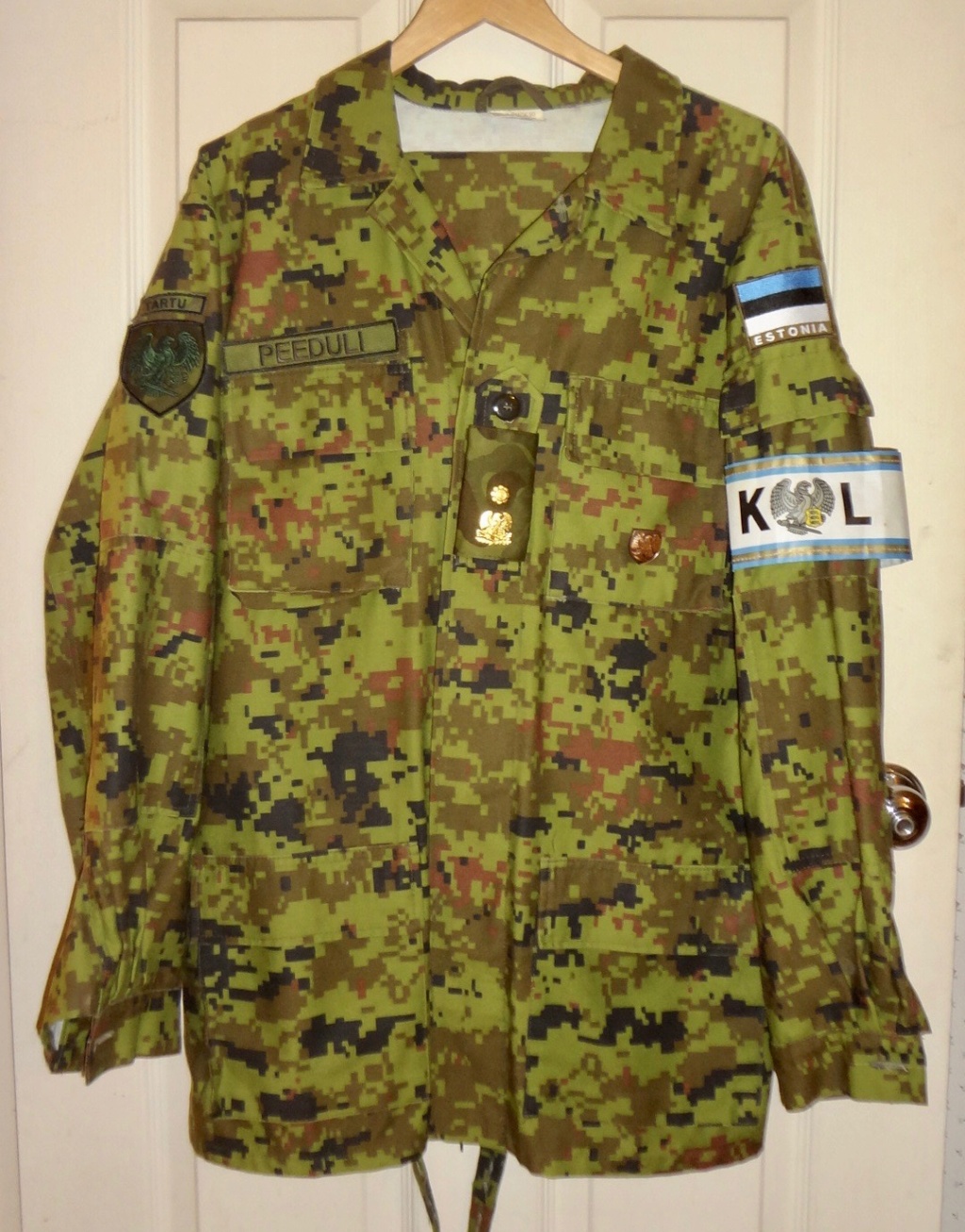 These uniforms were initially intended for military use but quickly wound up in Defense League hands as the modernized uniform was introduced. Either the military was unhappy about the uniform or it was intended as an interim uniform to test the camo pattern while the modernized cut was being developed. The former is backed up by info provided by an Estonian member of this Forum, the latter is just a theory I came up with to consider. Whatever the case is, the uniforms very quickly became "hand-me-downs" to the DL.

Interesting things to note on this uniform are the old badging from TTsKO uniforms. Period photos show the two piece TTsKO right arm badges to be pretty commonly used. The metal rank on TTsKO backing is also correct for the period as they did, and still do I think, wear metal rank when they want to. This rank itself is specific to DL. The parade armband on the left sleeve is also correct and easily found in pictures from the 2006 timeframe. The DL pin backed badge on the left pocket is something that would be worn on duty or parade.


Up next is the very short lived 1998 produced highly synthetic material TTsKO uniform with button on right arm badge flap. 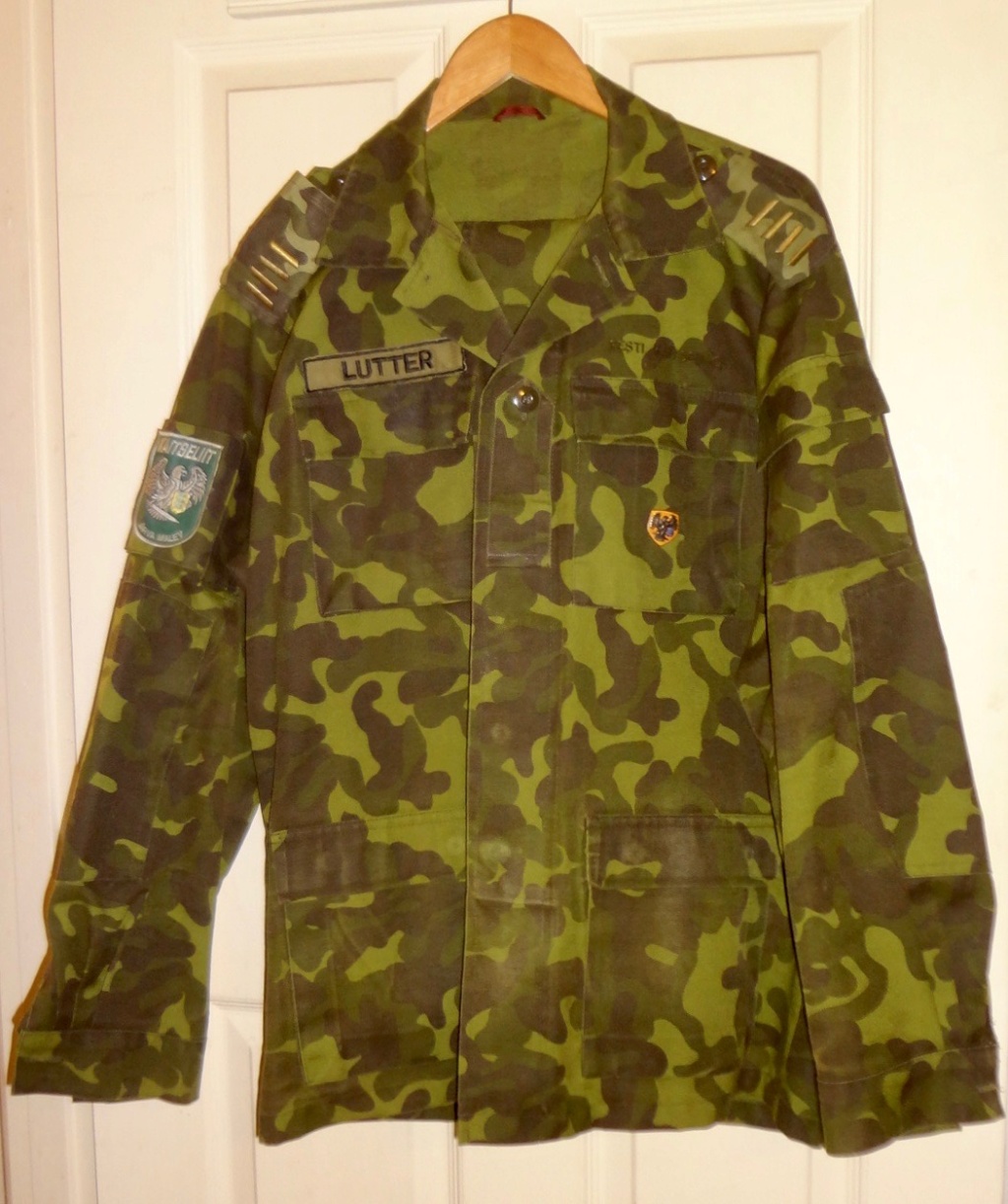 Like other official military uniforms, these quickly found their way into service of the DL. This one has an older style DL badge which was still in use (along with other variants) at the time. The uniform came to me with the outline of this badge and a hole in the left chest pocket for a screw back style DL pin, which I also put in place. Even though there is a center chest epaulette for rank, DL members tended to stick with shoulder rank with metal pieces. I have a picture of one guy with metal rank on his shoulders and a cloth rank on his chest. Regulations are merely suggestions for Estonians

Note there is no national badge on the right arm. At the time there was a lot of flux with the national badging. Different types, worn on different arms, or not worn at all. The national badging started to standardize in the early 2000s and more-or-less became standard with the digital camo uniforms. Though if you look closely, there's variation there too!

I'll add to this when I can but for now here is a photo of at least one Defense League member.

Defense League NCO on the left is wearing a 2nd type normal issue but the other guy wears a very interesting uniform.  It's cut like a 3rd type digital but the pattern is either an old border guard pattern, or something experimental. 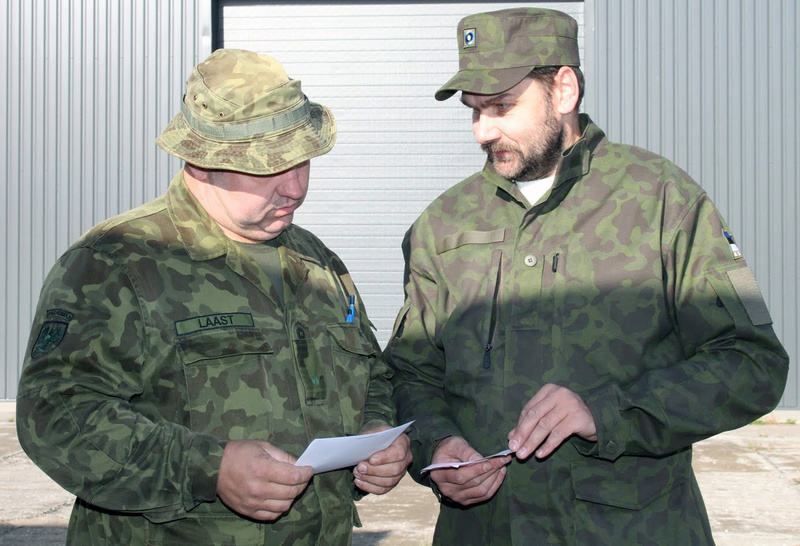 Yeah, there is a post about that somewhere on this forum. Not really clear why it was produced at all. Very rare, whatever it is. Bummer, because I want one 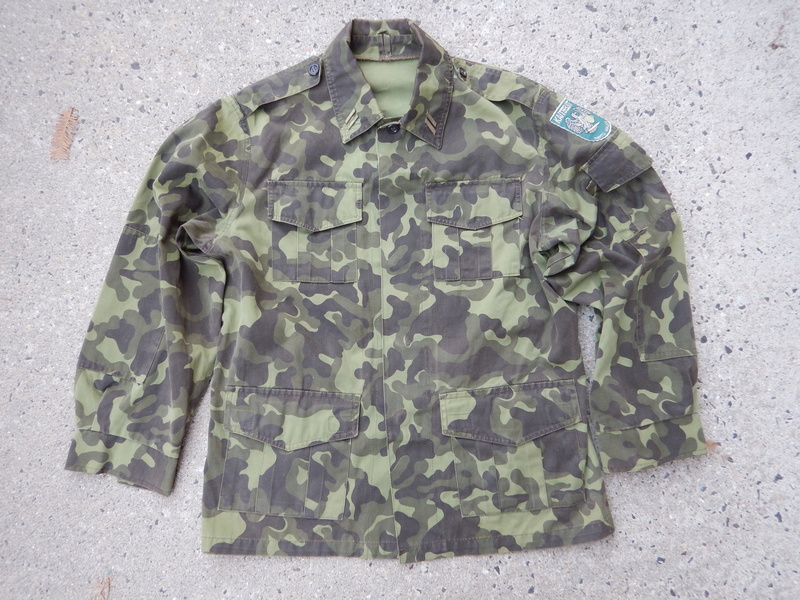 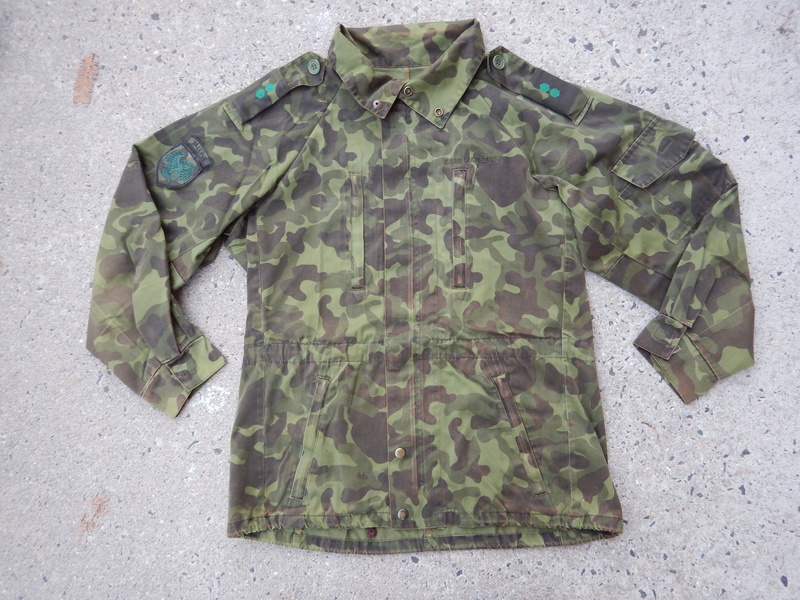 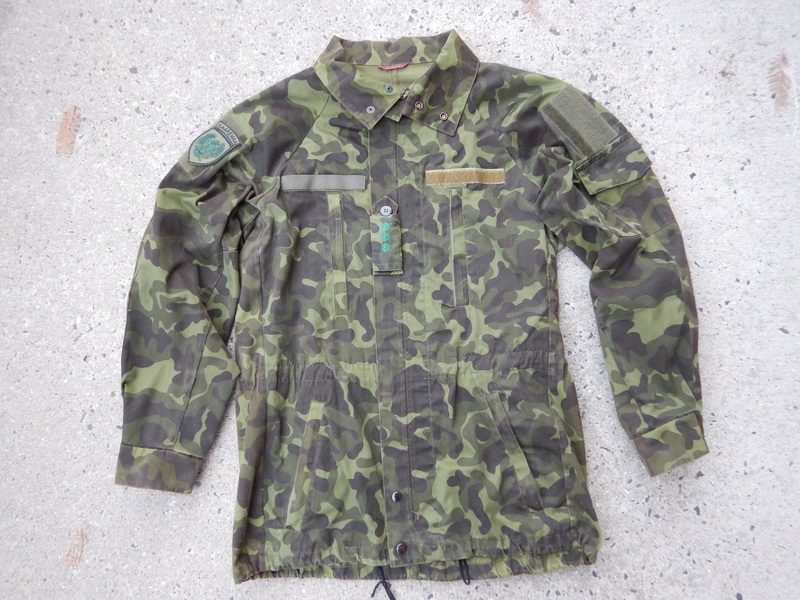 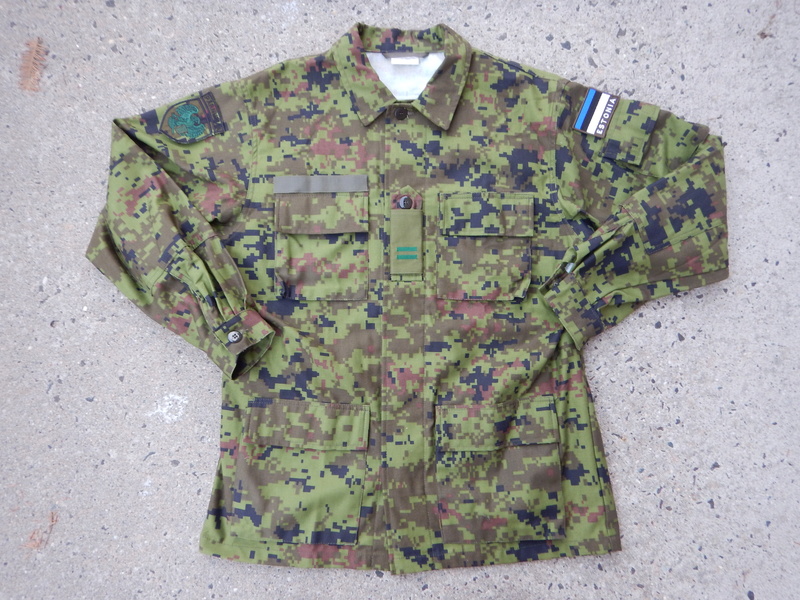 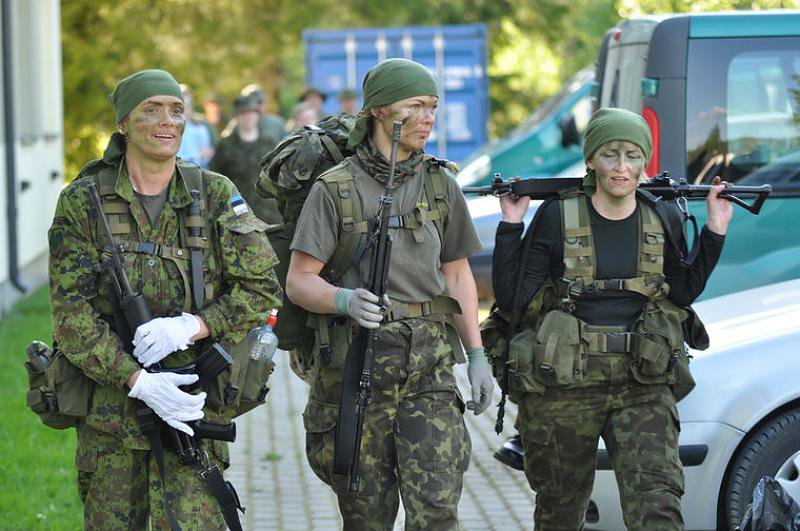 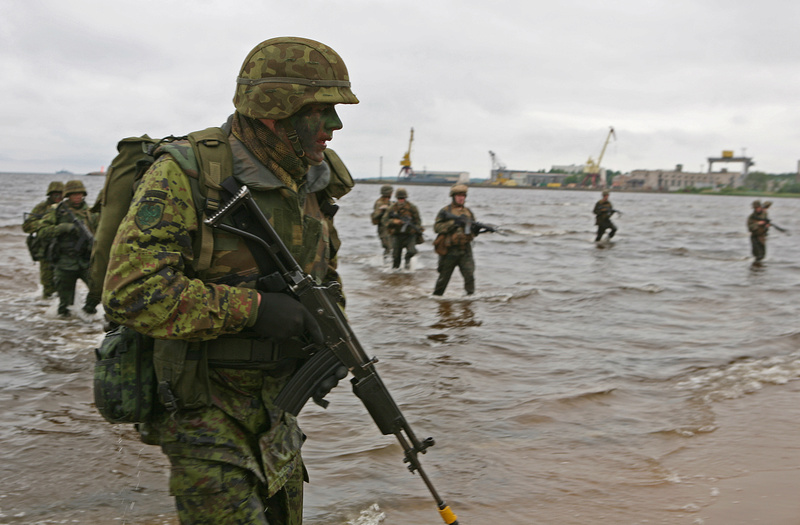 The Swedish style uniform with the chest epaulet is the most interesting one to me. I checked and the only picture I have of this type is the one you have. Do you see signs that the epaulets on the shoulders were removed and one added to the chest?

They look like they were not easy uniforms to manufacture and were probably not used for a very long period.
These are both made by as mikrel . 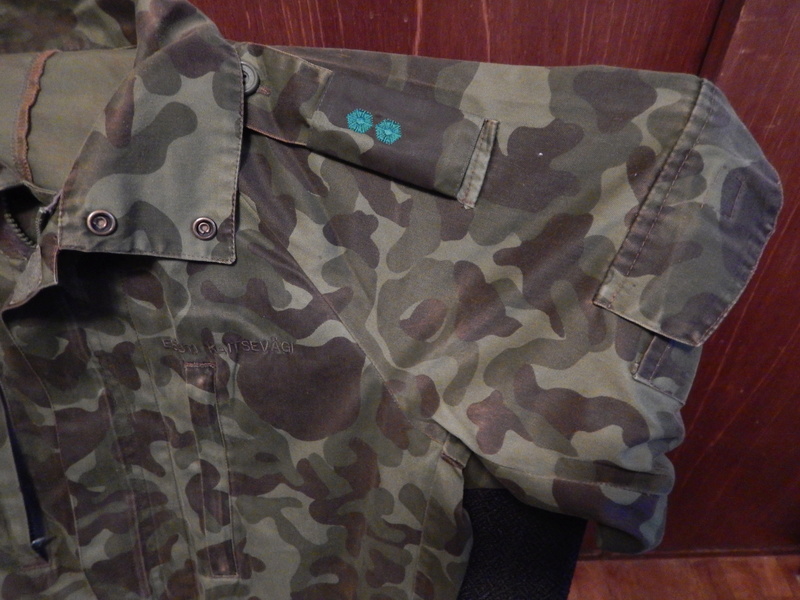 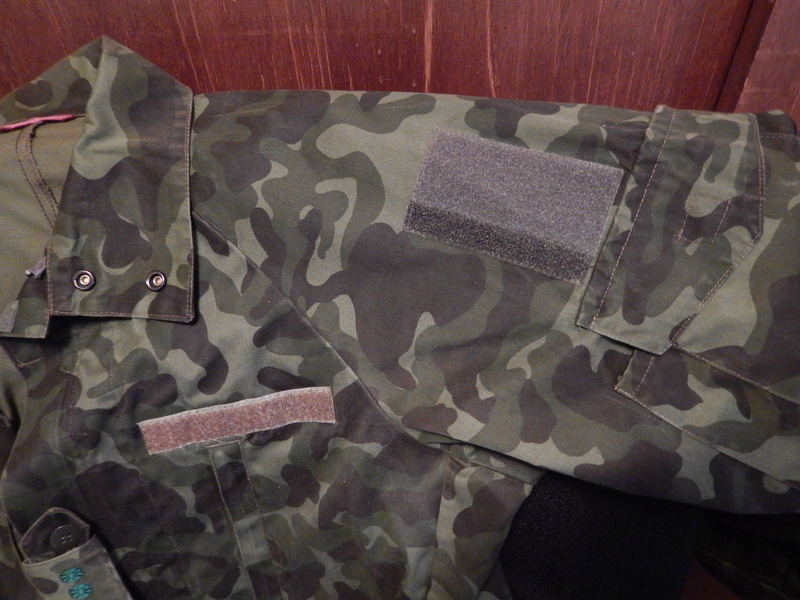 Hi.
That new cut and old camo uniform made for reserve units(about 2011??)
And that material is from old stock https://pildid.mil.ee/picture.php?/320050/category/55307 (same for taht camo matress).
Sten.
CollectinSteve

Welcome to the Forum. That is a fun group of pictures. Thank you for sharing the link.

A camouflage mattress? Finally, an Estonian camouflage item I don't need that for my collection. Well, maybe

What else was this cloth used for? I do not recognize it from older production uniforms. It looks thinner and less colorful than the standard issue uniforms.