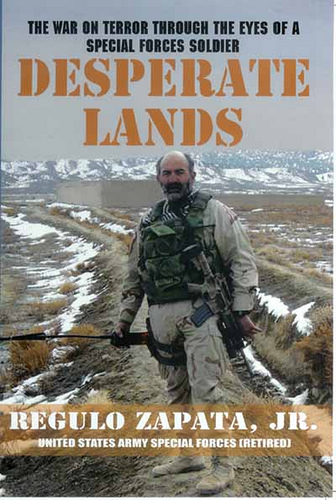 DESPERATE LANDS is the unprecedented story of U.S. Army Special Forces soldiers and the missions they have carried out while fighting the war on terror in the Horn of Africa and in Afghanistan.

The book is unique and timely, in that it tells the compelling story of our nations struggle and of its soldiers fighting a new and different kind of war never fought before a Global War on Terror.

This true story comes at a time when our nation has divided feelings and opinions about this war a division that exists among both government leaders and the American people.

These pages offer a different perspective that of lower enlisted soldiers reflecting their personal experience in combat zones in Africa and Afghanistan as they witnessed and experienced the fog of war.

The author Special Forces Master Sergeant Regulo Zapata, Jr. shares his extraordinary journey through ancient and desperate lands at the front lines of this ongoing war.

Here are true stories of sacrifice, bravery, excitement, horror, anger, tedium, fear, camaraderie, and more a firsthand look behind the headlines at the reality of the exceptional and difficult challenges U.S. Army Special Forces soldiers face as they defend America against the terrorist threat.

Here is a book that I just ran across & am going to try and track down, it looks VERY interesting...Has anyone read it yet???