The 200th Military Police Command is the senior law enforcement unit within the U.S. Army Reserve. The subordinate elements of the 200th MP Command are comprised of military police units, and includes criminal investigation detachments, chaplains, historians and broadcasting detachments. Units are dispersed across the continental U.S. with major subordinate units to be located in California, Michigan, New York, and South Carolina. The formation of this command is a departure from the legacy structure of a strategic force in reserve with assigned chains of command based mostly on geography. The purpose of this command is to train, command and deploy units primarily by their functional capabilities.

The 200th was formed as part of a transformation of the Army Reserve that saw units reorganized into strategically consolidated forces with similar functional capabilities. Nearly 97 percent of all Army Reserve military police assets are now commanded by the 200th.

DEFINITION FROM TIOH AND WIKIPEDIA

200th MP CMD, ACU on Velcro with a merrowed edge. 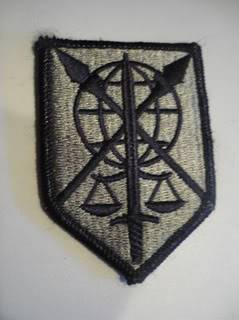