This is a very heavy weight cotton. Hbt tape edging and drawstring covers. All button closures except for upper zip pockets. Has windflap inside. Mint, un-issued condition. 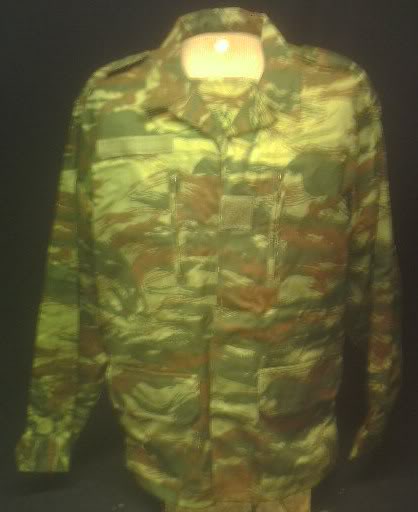 It is indeed a very nice uniform, but it isn't French

The French military never used Lizard camo (Leopard, as they call it) in F1 cut. However, the Chinese made TONS of these in the late 1980s and early 1990s for various African nations. Several nations still use them.

Someone with expertise in African camo can probably point out how to tell the difference between various production runs and their intended contract countries. However, as far as I know the common type was used in many countries concurrently.

In the early 1990s these were dumped onto the market. They were very, very easy to get in the US at least. I even used one as my primary paintball uniform back in the 1990s. Then they dried up and they have become more difficult to find. However, they appear on eBay quite regullarly.

I think Sierra Leonne used this camo for their Army.
nkomo

So did Zaire and many others.
_________________
Always looking for Central American militaria 1965 to 1991. Especially items relating to Coronel Velasquez El Salvador Armed Forces
Sponsored content