June 30, 2010 was a non-working holiday in the Philippines for the 2010 Presidential inauguration of the newly elected President of the Philippines. And while most of our countrymen were either on their TV sets for this and others, came to personally witness the inaugural (some from far away provinces), Philip Co aka Camousarus picked me up very early morning at my apartment.

And off we go on an early morning ride.

While Philip was driving, I enjoyed the sceneries:

O dios mio!!! Wait….are we still in the Philippines??

Must be a very bad dream due to lack of sleep watching late night World Cup’s football!!
Decided to go for breakfast and really strong coffee!!

And strong coffee it was…waking us both especially Philip behind the wheel!

And finally, after traveling for hours and 190 kms away...we were in the town of Pilar, Bataan.

Few more kilometers up to Mt Samat on a nice pave road.

Entrance gate to the site of the Dambana ng Kagitingan or "Shrine of Valor".

Take pride in the courage of our race…

In memory of the defenders of Bataan

The Battling Bastards of Bataan; No Mama, No Papa, No Uncle Sam!!

The Philippine Scouts was a military organization of the United States Army from 1901 to World War II. Made up of native Filipinos assigned to the US Army's Philippine Division.

At the time of USAFFE's formation, the unit consisted of 22,532 troops, of which 11,972 were Philippine Scouts. Source: Wikipedia “Philippine Scouts and U.S. Army Forces in the Far East (USAFFE)”

Along with the island fortress of Corregidor, Mount Samat was the site of the most vicious battle against the Japanese Imperial Army in 1942 during the Battle of Bataan.
Suffering heavy losses against the Japanese all over Luzon, Filipino and American soldiers retreated to Bataan Peninsula to regroup for a last valiant but futile stand. This retreat to Bataan is part of a United States strategy known as War Plan Orange.
The site of the War Plan Orange taken from atop the Bataan Cross….

WOW....just a beautiful country. Nothing like that around here, thats for sure. Beautiful monument as well, I cant think of a better way to celebrate the day off.

Also, is that a Maxpedition Thermite Veripack in Foliage green I see on Philip's thigh?
downboy

Cool NAVSOG? cap!Still working on a trade for that cap especially when I saw a photo of a US navy SEAL wearing one in a news photo.Can`t wait to get one myself.
Please post photo of Subic...have`nt been there since 2002.Miss that place

misanthropic_gods wrote:WOW....just a beautiful country. Nothing like that around here, thats for sure. Beautiful monument as well, I cant think of a better way to celebrate the day off.

Also, is that a Maxpedition Thermite Veripack in Foliage green I see on Philip's thigh?

downboy wrote:Cool NAVSOG? cap!Still working on a trade for that cap especially when I saw a photo of a US navy SEAL wearing one in a news photo.Can`t wait to get one myself.
Please post photo of Subic...have`nt been there since 2002.Miss that place

See photos of Subic below.

THE BIG GUNS AND TRIPPERS

At the foot of Bataan Cross

The march, involving the forcible transfer of 75,000 American and Filipino prisoners of war captured by the Japanese in the Philippines from the Bataan peninsula.

A once beautifull river now dried up with remnants of Lahar from Mt. Pinatubo. The volcanic eruption forced the evacuation of US Forces from Clark Air Base.

Finally, the former US Pacific Naval Base in Subic Bay, Zambales.

Texas Joe’s along the beach in Subic..

2 starving trippers at Subic’s Meat Plus Café’ with Rib Eye Steaks lunch…yummy! Yeah yeah I know, but we're both on diet!

Yes, I'm wearing a NAVSOG cap I bought in Sangley a few years back when I went to the anniversary celebration. I rmember buying all the stocks at the ship store and by the time I arrived Manila I got to sell it to my friends.

Too bad we couldn't take pictures inside the museum as it was not allowed. Lots of bazzokas and crew served weapons in there.

I already told my brother-in-law to tell the guy in charge of the shrine that they should stop differentiating the entrance fee for a local and a foreigner. I told them it was discriminatory and it doesn't look good. I also complained that every move you make you have to pay for something. Next time let's bring a metal detector.
Sgt P.

Philip & Stuka,
Some awesome photos. Yeah you guys looked like you needed some strong java! I thought that Philip was carrying a mini cannon (camera) in that circular pouch.

I look forward to seeing all the places that you guys visited. Great to see some of the monuments. My Pop didn't get to the Pacific but my Uncle Charles did. He never talked about it so it must have taken many of his friends. Look forward to meeting you both. Bruce
Guessologist

Camosaurus wrote:
I already told my brother-in-law to tell the guy in charge of the shrine that they should stop differentiating the entrance fee for a local and a foreigner. I told them it was discriminatory and it doesn't look good. I also complained that every move you make you have to pay for something. Next time let's bring a metal detector.

You get that in Indonesia too. 2 different prices.

Thanks for sharing the photos guys.
stuka

Yeah, glad your brother-in-law promised to look at it..also, don't forget to tell him to allow tourists to snap some photos in the underground war Museum. Next time we go mountain climbing around Samat and we bring metal detectors to find some WWII Relics. I was told there are jungle trails and beautiful waterfalls along the way for a break.

We went visiting these places aside from our common interests were mainly to check out interesting sites. Should you guys come for visits in the future, we know where to bring you

Olongapo, an urbanized city in the province of Zambales, Philippines and governed as a part of the United States Naval reservation.

YES..indeed the home of GearMax series Special Ops gear evident with a local on bike with a GeraMax hydration pack…

But first, we need to find the local market for those military plaques’ craftsmen…3 days to make this military deployment plaque.

And there it was….Nes, this is for you!

And yeah, I brought some home…

These craftmen still taking orders from US Military especially those in Okinawa.

Philip and myself got some challenge coins too..

A poster design taken from “A life of Fighting” Philippine Marine Force Recon T-shirt; The shirt was designed by Pfc Peary Simores(RIP), a member of Force Recon Class 13 who were all killed when they were ambushed by Abu Sayyaf rebels in Basilan Island, Philippines.

Pfc Simores designed this shirt prior to their deployment to Basilan. It was his own inscription and picture printed on the shirts. The pic was said to be taken during their Force Recon training. The message is simple but powerful. He was one of the 15 Force Recon Marines killed last week fighting the Abu Sayyaf members who beheaded their fellow Force Recon Marines last July 10, 2007 in an ambush in Basilan. Yep, they got them, even killing one of the commanders who led the beheading of the Marines. It was said in the news that some of his fellow Force Recon Marines have tears on their eyes when the message on his shirt was read during his wake.

Here’s the photo of the T-Shirt 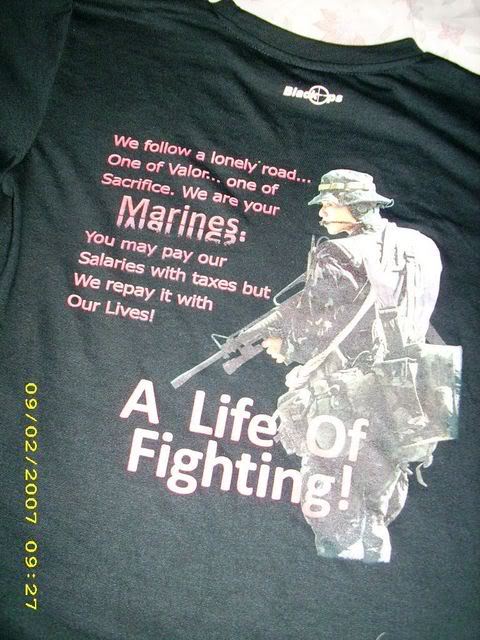 Philip & Stuka,
Excellent shopping guys. Philip looks like he wants to buy several differnt tactical Gear Max nylon products out of that one custom shop. Liked the challenge coins and the Naval specwar wooden signs. Now when you go looking for WW2 loot be sure that it is not the stuff that goes "boom"

I look forward to seeing Olongapo City and tasting many of your differant varaties of snacks. The monkey under the table isn't one of them.

Have to scope out where the mahognany aircraft and helos are made as I know the 2 that my brother flew in Nam. It would be a good present for him on his 2nd retirement.
Look forward to meeting both of you when I get over there. Bruce

Great trip guys.Really liked your subic militaria hunt.Was having a few drinks with my filipino(you know who)trading mate last night and he said that you blokes did well .Really liked that OEF-P coin...unfortunately based on Philip`s posts he probably bought them all out

.I noticed though that the Trident carvings have changed.
Now I`ll have to convince the wifey to go visit the Philippines again.
downboy

There's a Huey model up for sale but the camouflage is in modern times (read:grey). I think your brother would like his UH-1 in OD. I watched the 2am football game on tv and it ended at 4:30am and then picked up Stuka at 6:30am so needed the strong coffee to get by. We can sample the local delicacy in Angeles and have a few beers. If you guys are not up to the local food there are lots of American food in the area.

Asking around now for that last Death march Marker in Tarlac...

What a superb thread! Nearly as good as being there.
Camosaurus

Try making a trip to the Philippines and I'll bring you to Corregidor! I'm sure you'll like that!
swag

Camosaurus wrote:Asking around now for that last Death march Marker in Tarlac...

I don't know where the last marker is but here's the 100 km marker. This is at the entrance to the American Cemetery at Clark Airfield. 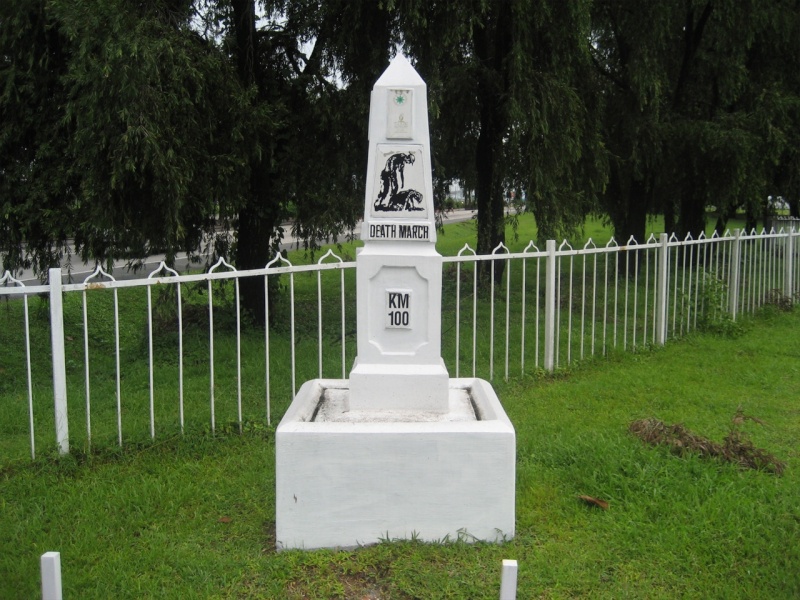 Great thread here! On one of my next trips there we'll have to have something planned, I'd love to go poking around the country side with you guys.
Camosaurus

The Death March ended in Capas, Tarlac which is the next province after Angeles. I'll try to check where the last marker is. We can do this trip again when you come back.
transmission

the anniversary of the Fall of Bataan is coming near, will try to post some pics of my grandfather's war medal to commemorate the event and also to remember all those who fought in the war.
ccamote

Can I tag along when you guys go back to Mt. Samat & Olongapo next time?
Camosaurus

Definitely not tomorrow!! The President and the surviving Filipino, American and Japanese veterans will be in Mt. Samat tomorrow. Surely, I'll make a trip this April I have a guest that needs to visit the place.
stuka

hmmm....? Who might that be? Another goat overload, bloke?

very nice pics guys, seems like is a lot of fun to ride along...

I wish i could make a trip to Mt Samat as well...

My dad spend a couple of weeks during the vietnam war in the philippines, he really loved the country and the people...
sinloi_sam

I'm new to the forum, but can't help notice the shirt of the Marine Recon. Where can I purchase one?

I'm new to the forum, but can't help notice the shirt of the Marine Recon. Where can I purchase one?

Sorry, Sam...so busy making a living and just saw your post.
Just in case you haven't found the shirt yet. You can check out at Marine Barracks in Fort Bonifacio or you may also check availability at the military shops around the barracks.
ccamote

You guys plan to go back to Bataan this April?
Sponsored content