You are not connected. Please login or register
+2
filupe
Delta 66
6 posters 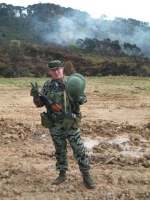 Here's some pics of some Kiwi & Aussie items that I picked up just before Christmas from a Thrift shop just round the road by ferreting through their bins of "Work Clothes" - Merry Christmas to me!! 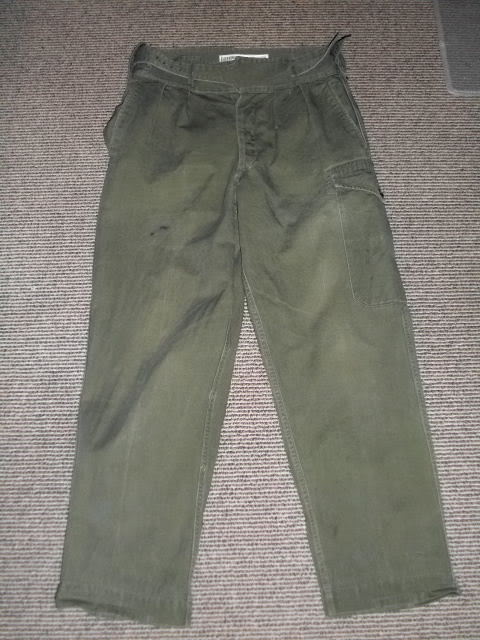 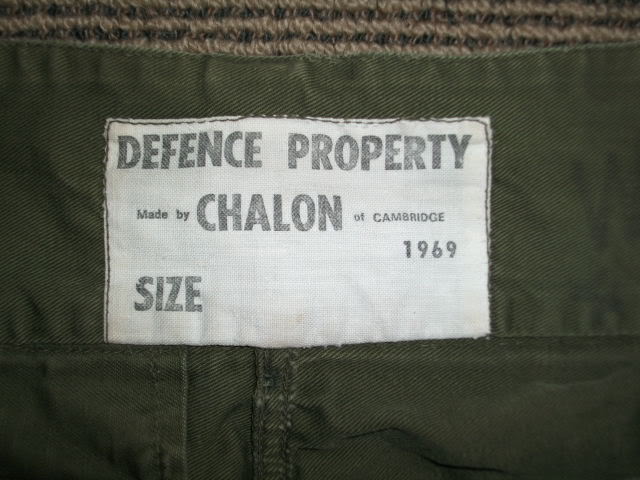 J Hat. Still had the pin from a grenade or a smokey on it 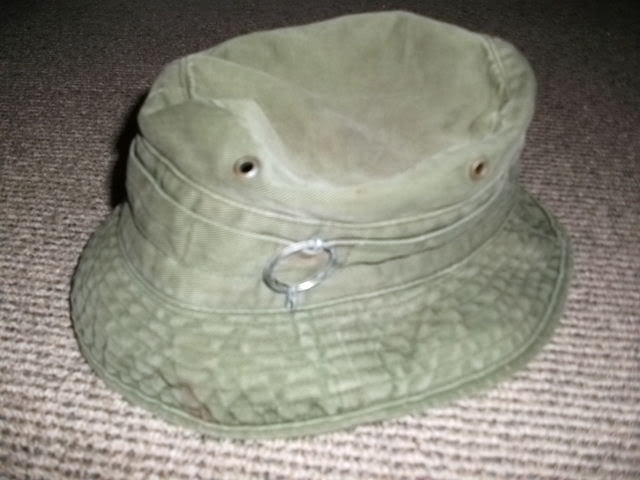 Aussie JG Shirt: This example has wound dressing pockets on each arm. 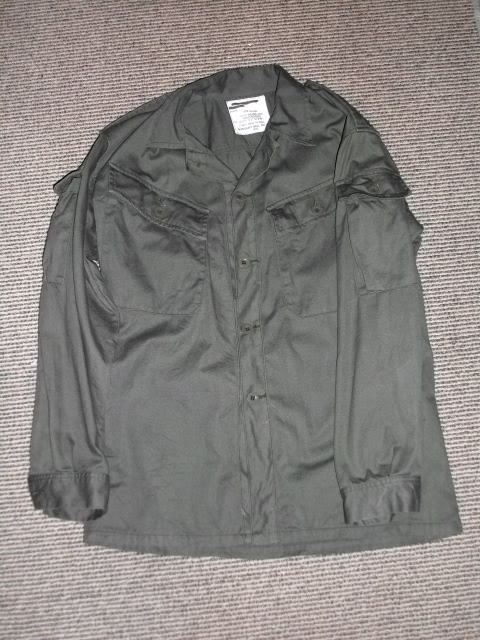 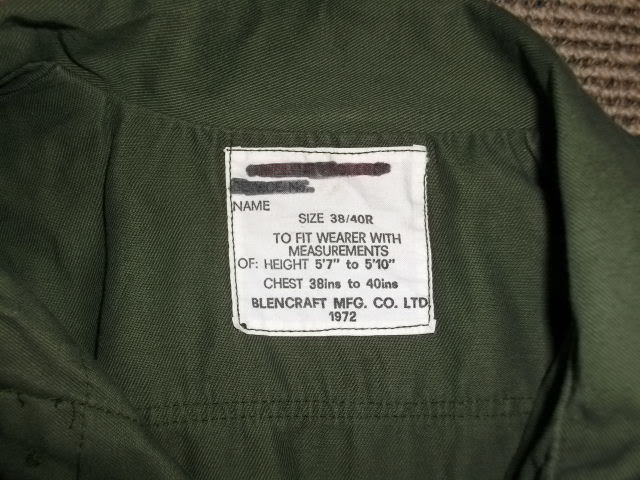 Aussie Camo rain jacket: Pretty cool, as it all folds up into it's own pocket. 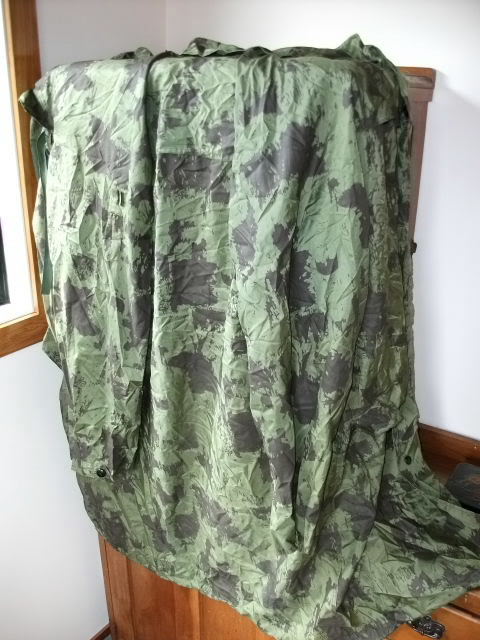 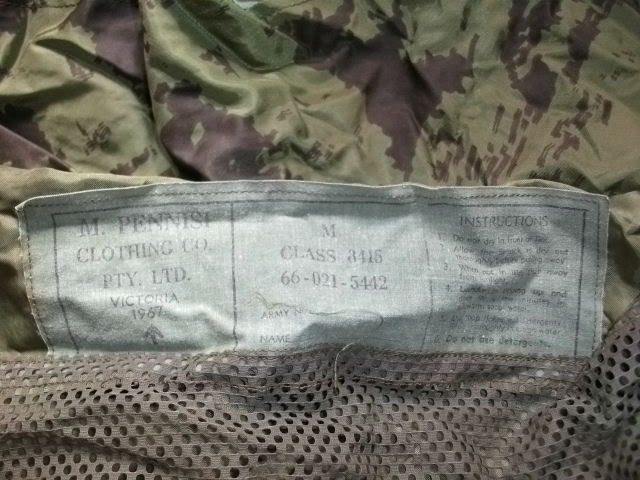 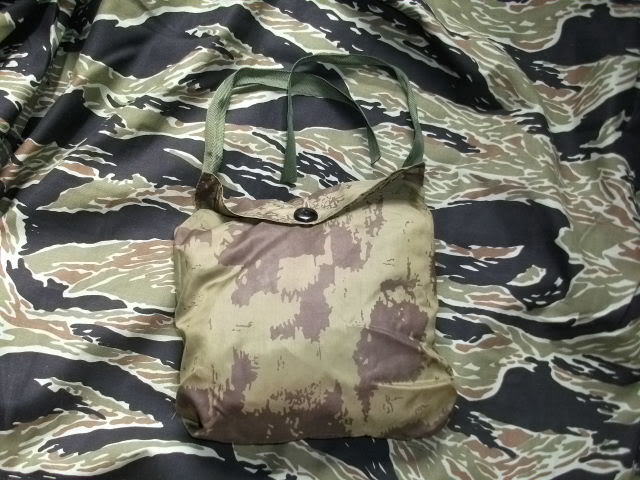 I also got this from there a few weeks later: 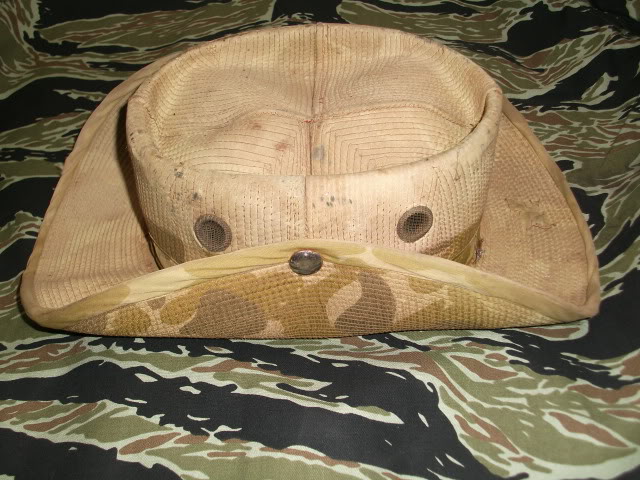 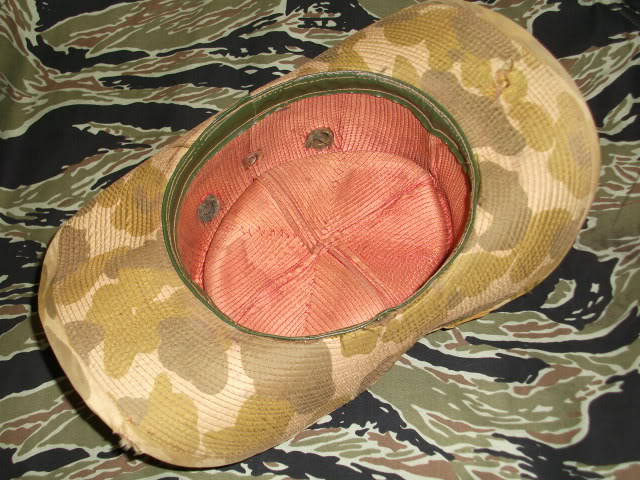 Your 'Aussie JG shirt' is actually the NZ made version of the Australian jungle 'pixie' shirt. The buttons and the label give it away. The NZ version is just as rare if not more so, than its Aussie counterpart.

Your South Vietnamese made 'cowboy' hat is a nice salty piece for sure! If only it could talk ...
1stDivVet

Love it!! Had a guy askin if I could find one of those rain coats not to long ago.. I think I've got a set of the pants here somewhere. I'll have to dig 'em out.

filupe wrote:Your 'Aussie JG shirt' is actually the NZ made version of the Australian jungle 'pixie' shirt. The buttons and the label give it away. The NZ version is just as rare if not more so, than its Aussie counterpart.

Too true, just did a company search & they were indeed a N.Z Co. (Dont know why I hadint done it before.....) Had just assumed it was Aussie issue cause it looked like a Pixie shirt. Cheers for that

Cheers, yeah, I was pretty stoked to find them

1stDivVet wrote:Love it!! Had a guy askin if I could find one of those rain coats not to long ago.. I think I've got a set of the pants here somewhere. I'll have to dig 'em out.

The pants in this pattern are commerial items, they were never issued although apparently they are rumoured to have been trialed some time in the early 80s, they did however issue a bush hat in this pattern made from the same material, which was very short lived.

The funny thing about these rain coats is that although they were issued they were very rarely ever worn by Aussie soldiers in Vietnam, firstly because they made you sweat and you got as wet as you would If you werent wearing one, and secondly they made a swooshing noise when you moved.

On a side note I knew the bloke who designed this camouflage pattern, he designed it some time in the early 1950s when he was in the Survey corps but told me he had actually thought of it whilst serving in New Guinea in ww2, unfortunately he is no longer with us.
Delta 66

Thanks for your feedback re the trousers.

I dont believe these are commercial items as the label states that they are Defence Property dated 1969, thus contract made for the New Zealand Army.

I also believe these were issued to Kiwi's serving in Vietnam. Here's a shot from Vietnam, taken soon after V4 arrived probably June/July 1969 (you will note, the same year as my pair are dated) in which Sgt Tom Tuhiwai is seen wearing a pair of this single leg pocket pattern. 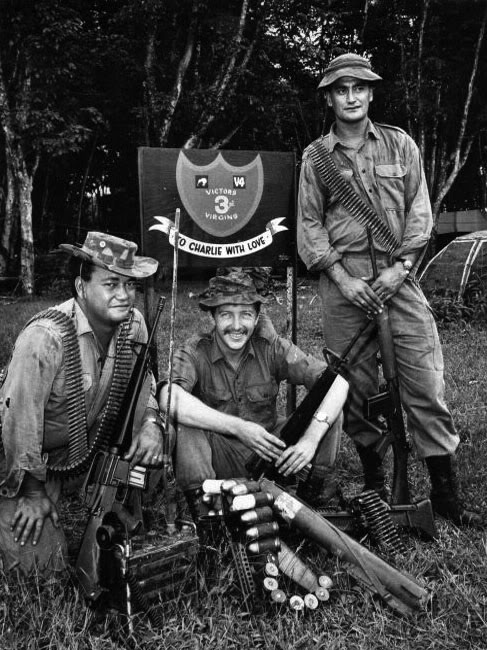 Hi mate, I was talking about the matching trousers to the Aussie raincoat that Fins said he has to not the JG pants, no problem at all with those

Nice pic of the boys in Vietnam btw.
My uncle served as the visual tracker in the combat tracker team of 2RAR(anzac) on their second tour 1970-71.
2ndAIF

For those who have never seen one heres a pic of the matching hats that came out with the rain coats, Its pretty hard to find a decent one though as theyre generally always faded and torn along the vents like this one 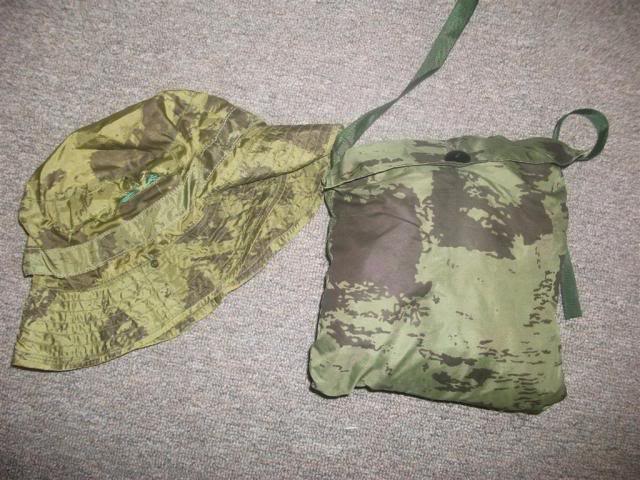 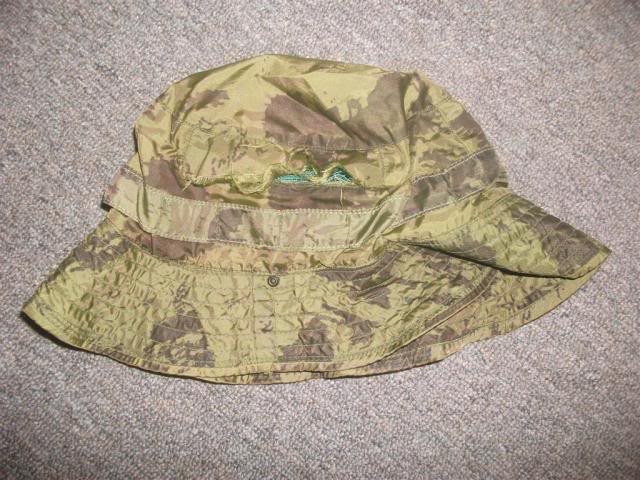 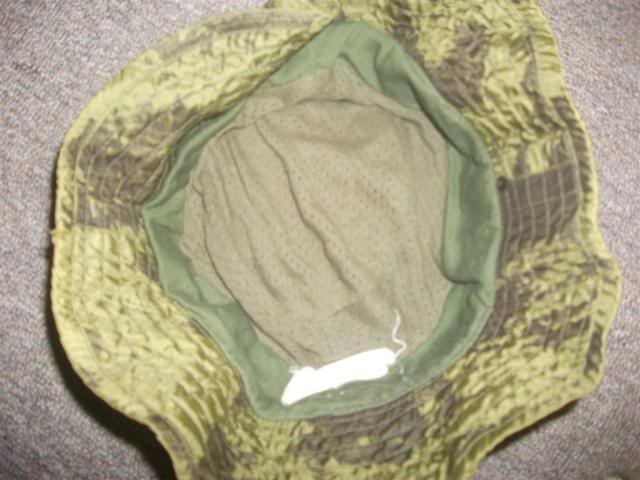 Mate, that hat is as rare as rocking horse Sh*t! Nice bit of kit. Looks very sim to the hat Pte Hardie Martin is wearing.....

Re the camo rain pants, I have a pair of 1960's commercial camo "elasticated over pants" made by Dunlop that a mate of my dad's had with him in Vietnam that are made from a very "swishy" nylon material that he never wore...Lol. Will dig em out & post up a pick

2ndAIF wrote:Hi mate, I was talking about the matching trousers to the Aussie raincoat that Fins said he has to not the JG pants, no problem at all with those

Nice pic of the boys in Vietnam btw.
My uncle served as the visual tracker in the combat tracker team of 2RAR(anzac) on their second tour 1970-71.

Ahhh, my mistake. Thought you were talking about the JG's bro

Thanks for posting it .

I'd have to back 2ndAIF on the camo splotch rain pants - only commercial manufactured. That's not to say that diggers didn't buy them to wear on exercises (I did)! The interesting thing is that that particular camo pattern was produced in a variety of different material weights. The pants as I remember had a translucent polyurethene backing where one could make out the external pattern. Other materials have had a rubberised OD backing and then there's the heavier weight version which I've seen made into water bladders holders, flotation vests, even mail satchels.

The rain hats are interesting. As it was relayed to me, they were only supposed to an experimental item with a run of about 2000 - somehow that got translated to 20,000 hence these hats, until recently, have been relatively easy to source. My local disposal years ago had a basket full of them.

The raincoats were known colloqially as 'Raincoat, Psychological' for the reasons which 2ndAIF have already described. They were replaced in the system by an olive drab version which wasn't much of an improvement and had the added peculiarity of smelling strongly of vomit straight out of the packaging!

There was also an issue dark green lightweight nylon anorak with white(!) front drawstring and a tag which included a warning not to wear whilst dealing with POL as any resultant static could cause combustion!
1stDivVet

LOL I meant I had a pair of JG's around here somewhere. I don't have any of the rain gear. I pitched my own poncho a couple years ago as it started to smell like vomit!! A year or so ago, I was in on a large warehouse buyout of surplus. There were 4 or 5 boxes of rain gear that was moved from the inside of the building to the entrance because of that smell.. Funny thing is, the doors to the inside of the warehouse were locked, but he front entrance doors to the outside weren't.. Nobody EVER attempted to steal the smell old rain gear and a whole large box of un-issued Nam era US ponchos went un-molested. We kept those and pitched most the rest of the newer ones and the rubber boots.
Love the rain hat. I've got an un-authorised one a friend of mine wore as a medic attatched to the USMC in Nam. Kinda looks like the Kiwi boonie you posted, but waterproofed. I like that camo one better tho..

I want that rain coat.Hard to find though.From what I have heard there nice.
Sponsored content