The seller claimed it was some sort of special issue, but to me it looks like a badly batch of cloth. Much like some German 5 Color Flecktarn and Hungarian M90 fades to a very orange color. The jacket is, without a question, genuine issue so there's no doubting that a Marine wore this around for a while.

Comparison shot next to Georgian MARPAT (I didn't have USMC MARPAT handy). The Georgian colors are pretty much identical to USMC so it's a good comparison. 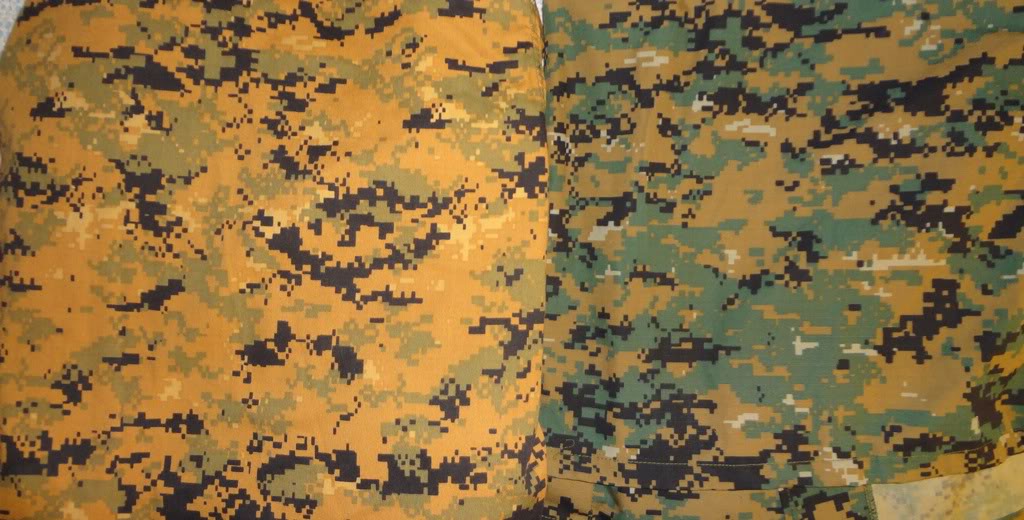 Could it be the affects of sea water ? I understand the auscam navy cammies go orange to when exposed to sea water.
CollectinSteve

Sea water is an interesting variable that might be part of the equation. However, I think the most likely source of the problem is a bad dye job on the cloth. As I already mentioned, there are a ton of German Flecktarn items out there that also have the brown changed to a significantly different color.

The interesting thing is the inside color of the orange jacket looks quite different than a normal MARPAT jacket. A normal one has a sort of greenish look to it, while the orange one has a tanish look.

This is probably just a bad dye job, Or it went under some chemical change.

BUT! IT LACKS THE USMC EMBLEM, So it's not real in my eyes.
CollectinSteve

It's genuine issue, no doubts about it. The emblem is spaced far enough apart that it's easy to get a section that doesn't show one for a picture like this.

I have never seen any that exact color, but sometimes washing in large batches with harsh chemicals (like when deployed/on ship/or unit laundry is done) can result in some very strange looking uniforms. I've never seen one that "off" in my time though. Heavy frequent washing normally results in what some Marines jokingly refer to as snow cammies.

Of note about die jobs, a large recent batch of desert MARPAT MCCUUs are a distinct pink color. They were accepted and being issued and they look odd. I'll try and snap a pic.
CollectinSteve

Heh... yeah, military laundry is generally not kind on clothing, but I expect ship based laundry is even worse. Gotta keep all the ocean's minerals from staying in after rinsing!

I've seen the "orange" problem with large batches of Bundeswehr Flecktarn produced in the late 1990s. Usually washing and wearing fades things out as with most uniforms, but in this case a few washes led to an overall orange look. There were other batches that faded differently than the norm, though not like this one. Such color changes can happen if the dyes they used weren't properly manufactured. Instead of washing out evenly some part of the pigmentation is more soluble. Or some such scientific process I only barely comprehend

My take on it is by the time such problems are identified the government already owns the stuff and it's too expensive to bother correcting it. Easier and cheaper to let the stuff process through the system. I can also see an inspector saying "hey, this is out of specs! We're not going to take it" and the contractor responding by saying "will you take it if we mark it down 50%?". To which, especially these days, the answer might very well be "OK, we'll take them this time. But try not to do it again".

There just two different pieces of gear is all. I would assume the left is a faded mccuu and the right is a jacket or something judging by the thread line.
Sponsored content