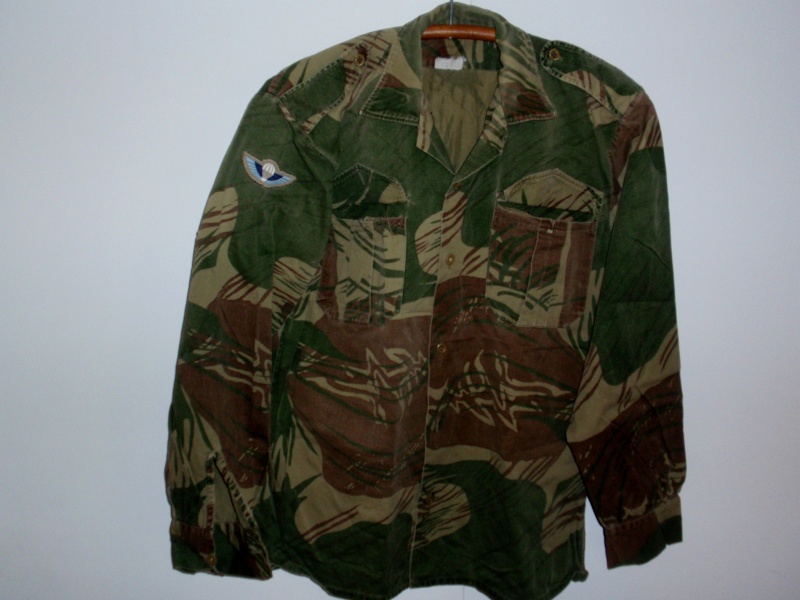 Thanks for the message. I know the wing is not from Robert Mugabe`s worker`s paradise,
and also know it is an SAS wing. The wing is probably worth more than the shirt..
It is original.

Thanks for the message. I know the wing is not from Robert Mugabe`s worker`s paradise,
and also know it is an SAS wing. The wing is probably worth more than the shirt..
It is original. 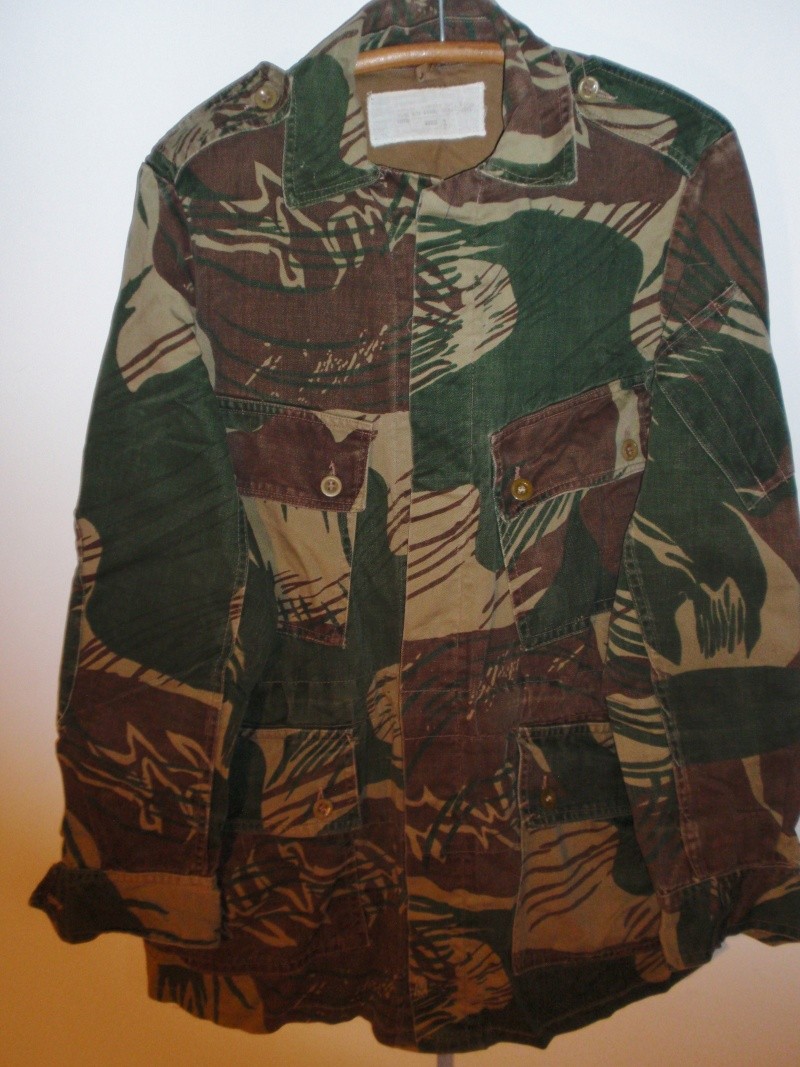 It is difficult to tell from the photo but the wing looks like an Australian SAS wing. The backing of Rhodesian SAS wings were in olive green for cammo uniforms and tartan green for service dress.https://2img.net/h/i1196.photobucket.com/albums/aa410/Madziro/Rhodesian%20badges/SASwingsolivegreen_zpsbbef07d9.jpg

Thanks for your comments, but I assure you, the para wings are 100% Rhodesian. 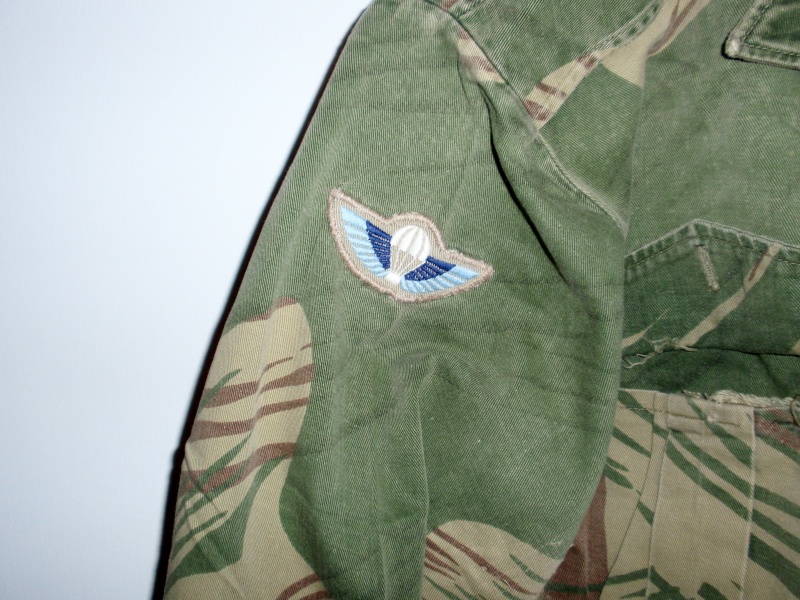 Maybe I should use a better camera

Thanks for your comments.

Around 1985, I received a large parcel from South Africa that contained all of the Rhodie kit I presently own.
It came from a personal friend that has always sent me legit items .

I have not examined the wings up close in a long time , but I cannot fathom why they would be anything other than what they are supposed to be.

My genuine wings, I hope this will help 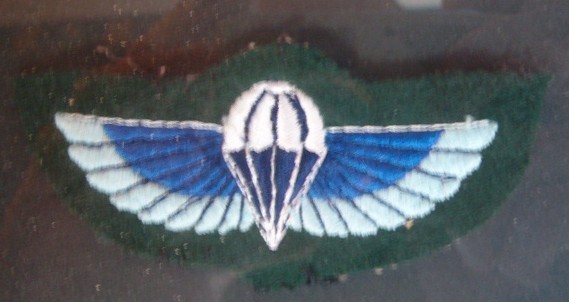 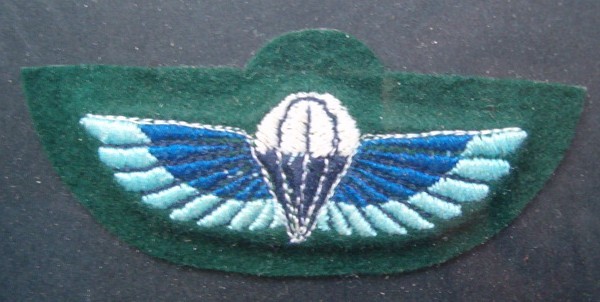 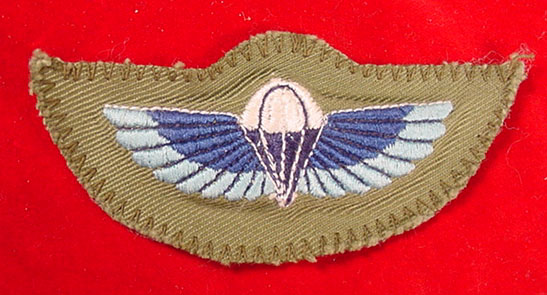 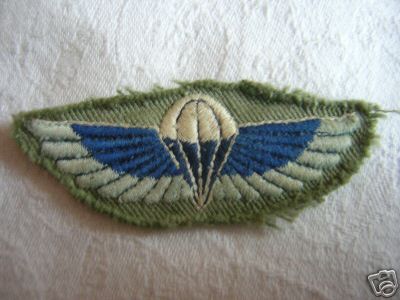 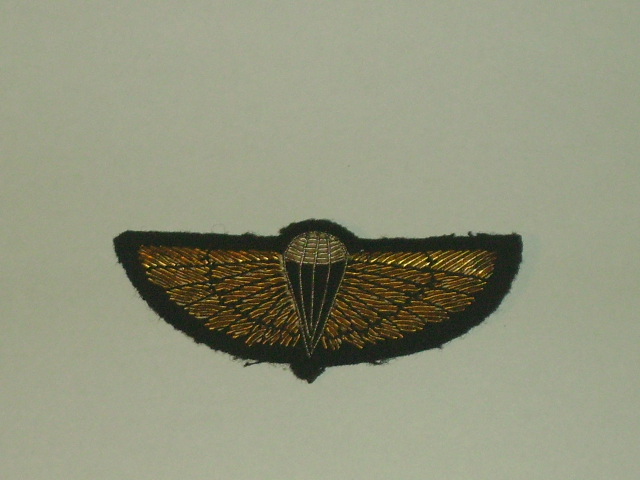 Thanks for all the input. I do see the differences, and I am more puzzled than ever...

I apologize if I offended anyone, particularly bousquet123.

Stubborn is my middle name...

Bit of a reach, but I suppose it could be possible.

I am puzzled because the wing appears to be original to the shirt. And it's a pretty old shirt.

It has been with me for 3 decades, and I certainly did not sew the wings onto the shirt.

It seems strange that someone in Africa would affix an Australian wing to a Rhodie shirt.

Thanks for all the input. I do see the differences, and I am more puzzled than ever...

I apologize if I offended anyone, particularly bousquet123.

Stubborn is my middle name...

Nobody is perfect and I can have too a wrong expertise, apologizes accepted
ripcord

Took a couple of photos today. The wings certainly do appear to be Aussie. I do believe the photos support my belief that the wings are original to the shirt.

Conditions of both shirt and insignia seems to show they are of similar vintage.

At least I am consistent in posting crappy photos; Cant blame the camera,it' me... 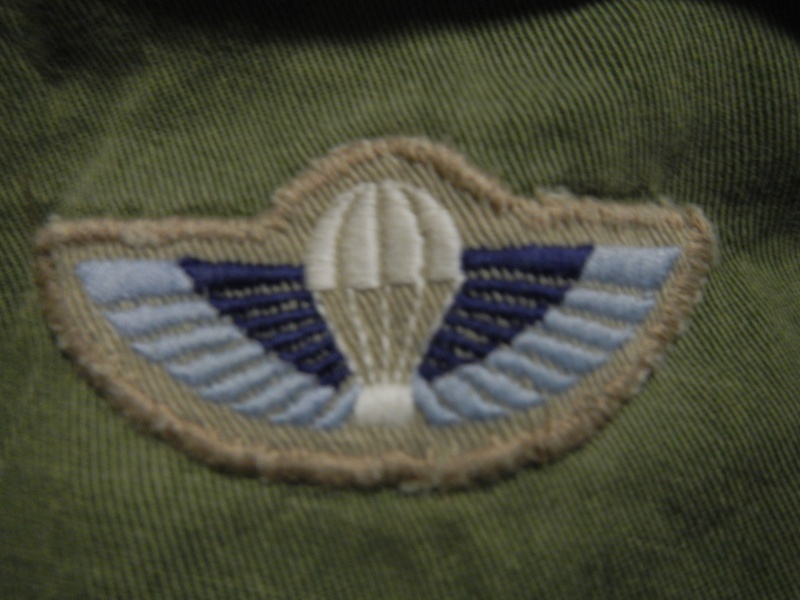 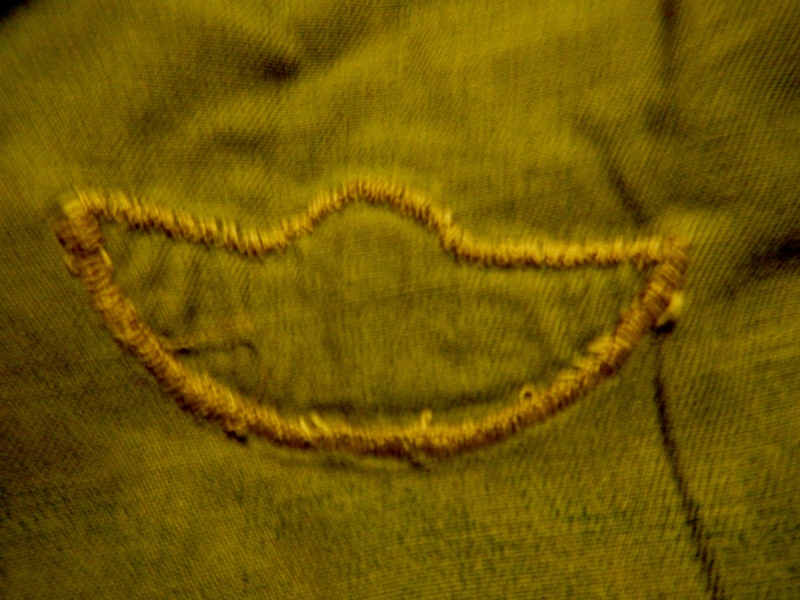 By the way, very nice collection of SAS wings,

Thanks for posting them..

Just to throw a spanner in the works, I believe the wings might be based on Australian wings but they aren't issue Australian wings: a.) they are assymetrical - not machine embroidered, and b.) they are done on some sort of drill backing as opposed to chambray

The Australian wings loski posted above have been the only one I have observed on any form of Australian combat dress (if they are worn at all)- they were also worn on the everyday wear polyester shirt which is why they are on a khaki backing.

As to why they are on a Rhodesian shirt - it's not so implausible. Many Australian Vietnam vets found the transition back to a peacetime army painful so sought new adventures elsewhere, particularly Rhodesia. I personally know of two (non-SASR) acquaintances who took this path, one RLI and one Selous Scout. Having recently read Paul French's 'Shadows of a Forgotten Past', he also mentions one ex-Australian SASR soldier who eventually fails Selous Scout selection because he couldn't work with natives.

Thanks for your input...

All good info, and additional confusion. But good confusion...Ha,ha...

I have a friend who has some contacts with Australian vets of the bush war in Rhodesia.

We may yet find out more info on these confounding wings,and hopefully on who actually wore them on that shirt..

Some info on Rhodesian para wings.  Note that Rhodesian made SAS wings all have 9 "feathers" per wing.  British made ones have 8.  Some of the early wings were made in Britain for the Rhodesian army in the early days of Malaya and the Federation.

Sorry, that's not a Rhodesian SAS wing. At least not like any of the many I owned over the years or saw in use during the war. The Rhod SAS has much blunter edges to the wing shape, not tapering like the ones in the picture. Also, as issues the Rhod. wings had a significant amount of padding making the wing stand out, and wear out quicker, consequently alot of times the padding would be removed makeing the wing flatter.

Oops, I see all of this has been hashed out already, late to the party.

I had a really cool set of modified Rhodie camo, belonged to an american who served in the French Foreign (as I recall his name was Ken Gaudet, also had his logbook of jumps while in the Rhod military, joined the Rhod Air Force as a PJI, The suit was standard camo uniform cut down and zippered like the old French Satin 300, short waist (like british battledress length) with elastic at the waist.

Maybe  I should use a better camera

onward288 wrote:Very worn highly tailored jacket looks French cut not in my area but a number of Kiwis served in the Bush War so i may donate it to the Waiouru Museum one day. 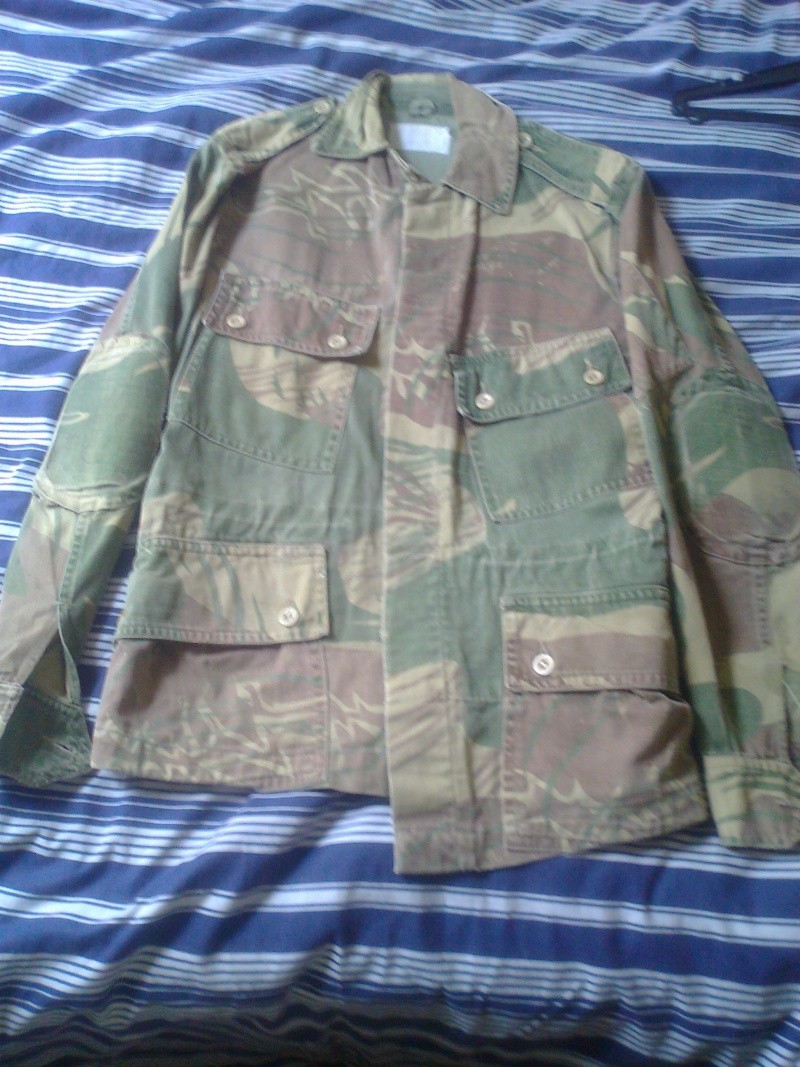 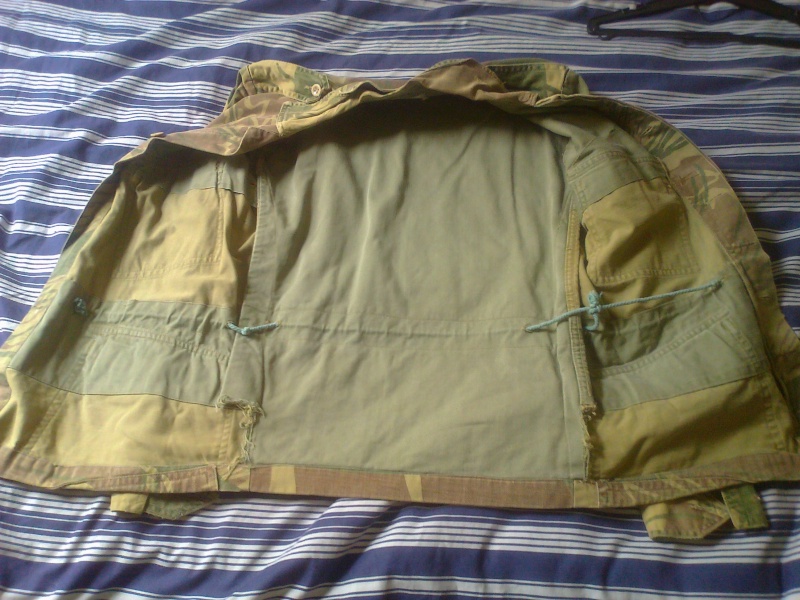 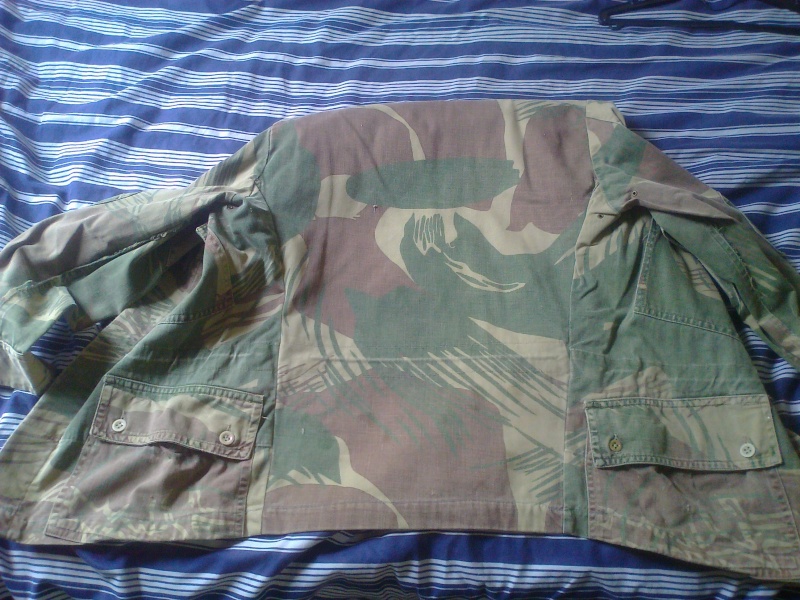 Have a look in the mess, on the wall is pics of NZ soldiers wearing this kit. Mid 70's iirc.
filupe

It was popular with Aussies as well, those who could get them in an all OD clad Army.   There's a 1984 documentary on Australian SAS Selection, 'Battle for The Golden Road', where an Australian medic attached to SASR gives a briefing wearing Rhodesian camouflage.

I used to wear a (repro) set myself playing OpFor.

Hi I am new member I live in Australia and collect Rhodesian Militaria this is my first post.Here are some pics of a jacket I just got. It is a Bunny jacket made from a Rhodesian Camo Jacket you can see the zip in the rear pic. Thanks Karl
https://i.servimg.com/u/f58/18/79/13/47/bunny_34.jpg
https://i.servimg.com/u/f58/18/79/13/47/bunny_36.jpg
Starlight

Clearing up mystery wings and tailored shirts I hope

Hi guys, was just looking at some of this old Rhodie stuff and what did I find at the bottom of your discussion. Me! I haven't seen that old SAS Doco in years. Let me go back to the beginning, the debate about who's SAS wings are on that shirt, they are Aussie, and judging by the wear and tear they're probably as old as the shirt. You guys were right in that the Rhodie SAS wings are on a distinct shape and puffed and are on a Twill OD Green backing. The Aussie wings are on a light coloured tan backing which suits the sandy coloured shirts worn here. At the time this shirt was being worn and the time line for those particular SAS wing it is most likely that they are Aussie wings. It however would not have been hard for one of the many Aussies who packed their bags and left from your shores to seek a life of adventure over in war torn Africa, and believe me we had stacks of Aussies serving with us.

This brings me next to the video clip documentary about the SAS in Australia. Following the very successful Brits "The Para's" it was decided to get the doco guru Guy Baskin to do a similar one covering the SAS. The medic that you see in that doco did not have any trouble at all getting Rhodesian uniforms etc. That's because he was a Rhodesian, having resigned from the army after finding out who his next boss was going to be, (BM) and he scooted for Aus.

Yes by now you can see where this is going, I am that soldier, and that was my own uniform. Except the beret, we wore a dull cherry beret in Rhodesia. I spent 10yrs with the Rhodesian Army 5 in infantry and 5 in Medical Corps. Joined the Australian army and lost a tape, back on in under 2 years and saw out the remainder of my 20 year career.

To clear up any other questions about the other shirts and combat jackets, we Rhodies had unlimited access to local tailors in the field in their tribal trust lands and so we set about cutting and styling equipment to suit our own personal likings, it was all "bush gear you always kept your good stuff for "bright lights".

Hope I've clear some of the mystery.
Sponsored content