Nice displays! Someday I'd like to make displays like this for at least my most favorite sets.

Some constructive suggestions... I'd give the BGS guy the MP5, as that's a better match. BW doesn't use MP5 as a rule, certainly not Luftwaffe higher officers (as yours is ranked). Also I noticed the belt on the BGS guy is incorrect. Can't tell from the one picture, but it looks like Berlin Polizei or another Polizei special dress belt. Standard belts are black leather with two prong open buckle. Fortunately they're pretty easy to pickup on German eBay at very reasonable prices.

Fantastic and regarding the MP5-AWESOME-what is it an Airsoft gun?
Gulf91

Fantastic and regarding the MP5-AWESOME-what is it an Airsoft gun?
saltefanden

I love displays like that; it really makes sense to see the items put together!
Wish I had room to do that, and like Steve says, I can think of two or three uniform combo's that would be on permanent display

@Steve, could Mr. BGS-guy be a Mr. BePo-guy? How can one tell appart from insignia and apparel?
thunderchild

many thanks steve for the nice compliments,im always ready to listen to positive comments and take on board any advice given ,ive always been a fan of the flecktarn camo ,in my opinion the modern version of the waffen ss pea dot 44 camo ive also gone for my most favorite displays too ,including my work in progress US soldier circa early desert storm before the choc chip patterns full introduction ,to be honest the sumpfmuster jacket is dated 1968 the m43/ M56 police cap is dated 1967 and the bread bag is dated 63 also not easy to view from my photo is a rolled up rainproof apron/poncho in the sumpfmuster pattern dated 1970 ,i believe the Heckler & Koch MP5 was introduced around the mid 60's so i see your point on using for the bgs display  ,  it wont take to much effort to transfer the smg over though:)  the Oberstleutnant's rank slides came with the parka ,so i was best pleased ,they were hidden in one of the pockets , well spotted on the border guard belt ,the Y straps are austrian and dated 1970 so will have to do for now and the belt is just a standard leather belt ,but i fitted my period de-nazified gott mituns heer buckle ,your right though i really must buy the claw type belt ,so thanks for the heads up on where to look for one ,gulf you are correct unfortuanately an airsoft replica ,but so acurate looking to the original i thought worthy of display ,and thanks saltenfanden ,i struggle for room myself thats why ive gone for torso displays ,id love full size mannequins for sure ,but still its great fun putting all the bits of field kit together in one display ,i understand what you mean about the east german bepo ,i think the cap roundel used by both east and west germany at that time makes it hard to distinguish between the two ,

How can one tell appart from insignia and apparel?

BePo (Berlin Polizei) wore a similar Sumpftarn uniform as BGS, but only for a few years in the early 1960s. However, this was the same style as the BGS uniform of the time, which is what I call the 2nd Model Jacket. What is pictured here is the 3rd Model Jacket, which started production in 1967 and continued until 1975. If it has an arm pocket then it's 3rd Model, which BePo never wore. So that makes this one an easy identification.

But when comparing BePo Sumpftarn to BGS it's also pretty easy. BePo have no provisions for shoulder rank, so if there is shoulder rank loops then it's BGS. Note that very early production of BGS 2nd Model did not have shoulder rank. Markings on the inside left inside pocket always have nice clear P.P.Berlin black ink stamp. And the camouflage pattern itself is different, which a trained I can spot even in a poor quality picture. For the trousers it's the same signs but with the addition of different buttons and slightly different button down straps for the belt.

The hat is the correct type and being only 1 year difference isn't a problem at all. Field equipment was often very, very old compared to the time being used. BW soldiers are still using equipment produced in the 1980s from what I understand. This is possible, in large part, because the equipment hasn't changed much since the 1930s

i believe the Heckler & Koch MP5 was introduced around the mid 60's so i see your point on using for the bgs display  ,  it wont take to much effort to transfer the smg over though:)

As a general rule neither BGS nor BW use the MP5 around this time (or even before/after). BW exceptions are special forces types, BGS would generally be similar (GSG-9). However, I believe BGS use of the MP5 was probably more widespread than that. Typical weapon for a BGS member in this timeframe would be G1 rifle, IIRC.


well spotted on the border guard belt ,the Y straps are austrian and dated 1970 so will have to do for now and the belt is just a standard leather belt ,but i fitted my period de-nazified gott mituns heer buckle ,your right though i really must buy the claw type belt ,so thanks for the heads up on where to look for one ,

The Y straps are easy to get as well, though a lot of them are stamped for Polizei of various States. But physically they are identical so it's not something to concern yourself about unless you really want to

Belts are sorta the same, but in my experience rarely have stamps (either never had one or it's worn off).

many thanks steve on the additional information ,its nice to here confimation that i done something right on the bgs display ,the woolen police cap was my only option in finding a correct style of headgear ,how hard is it to find the period sumpfmuster cap ,i can find plenty of sturm/miltec versions though but how authentic these are i dont really know but i think the 4 side ventilation grommits give them away as modern ,here is some close ups of the bgs jacket ,the sleeve pocket has been spliced a quarter of the way down with a new piece 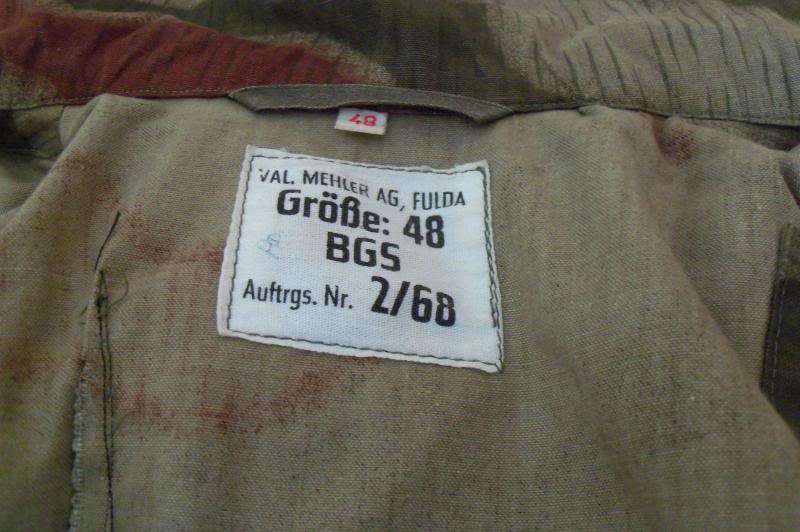 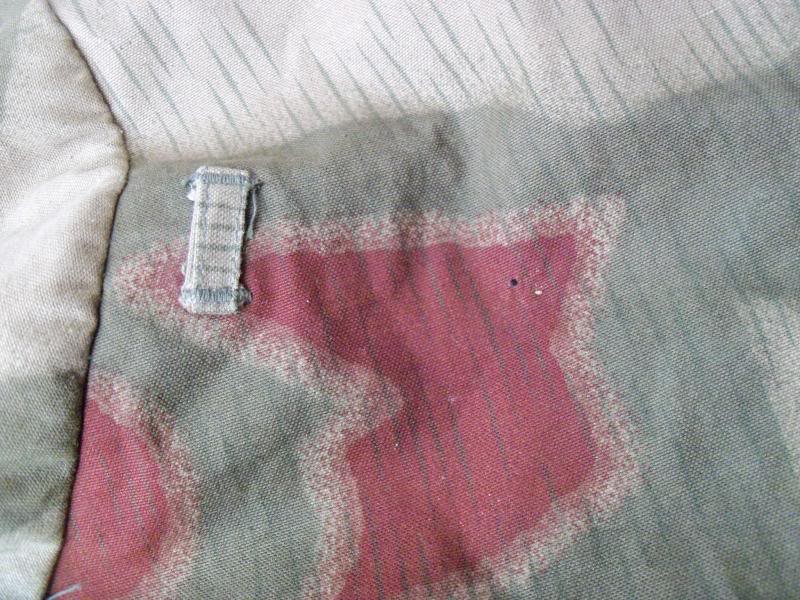 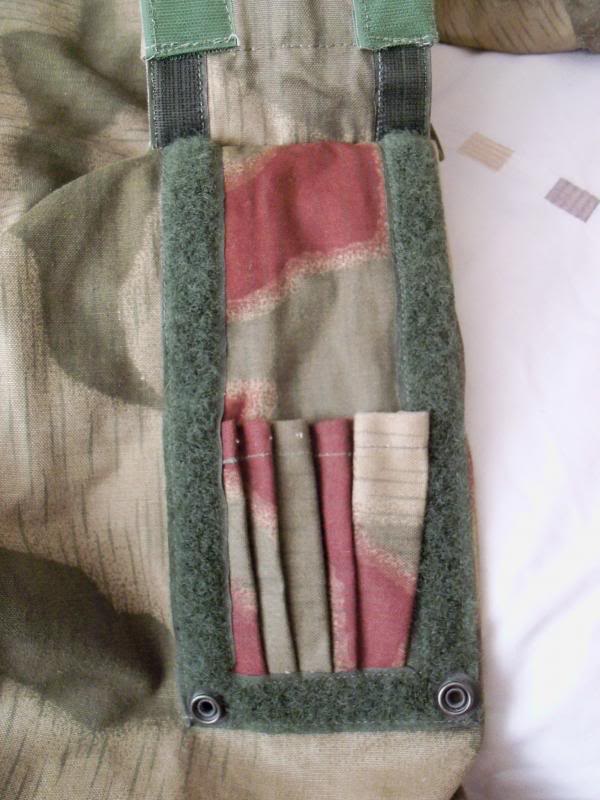 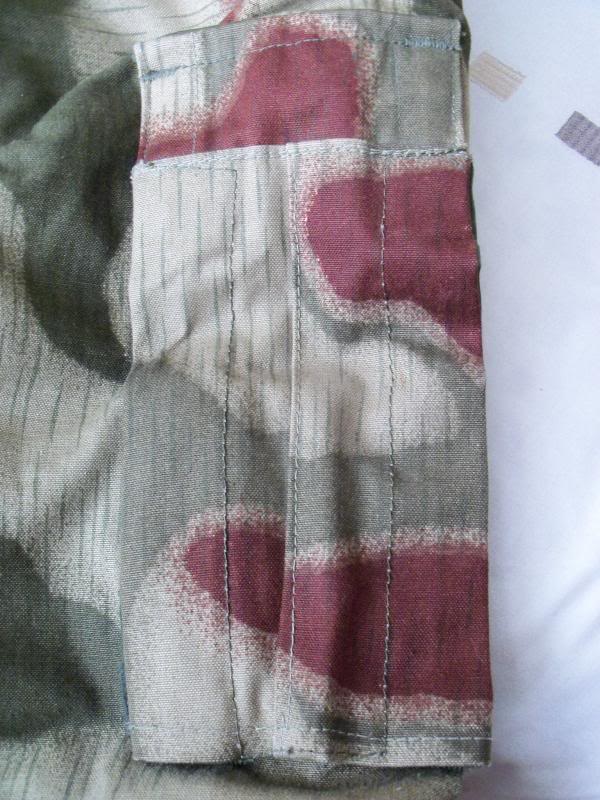 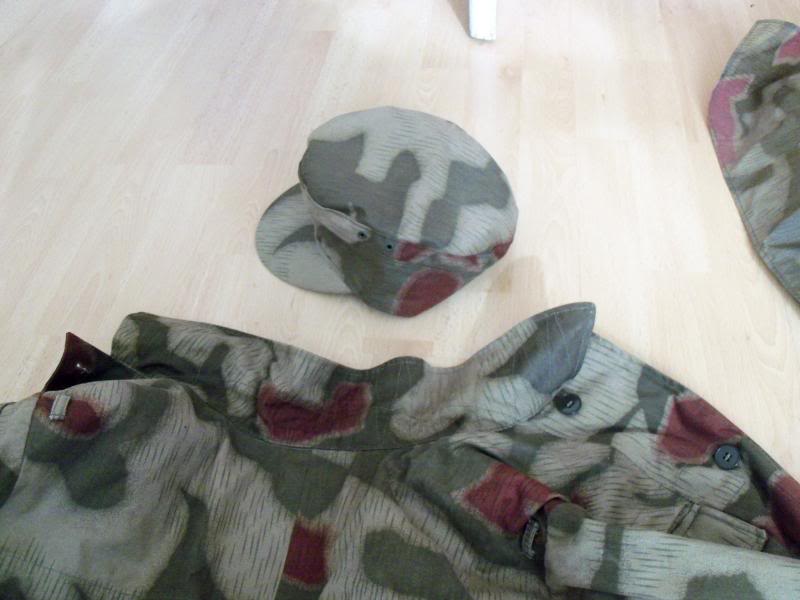 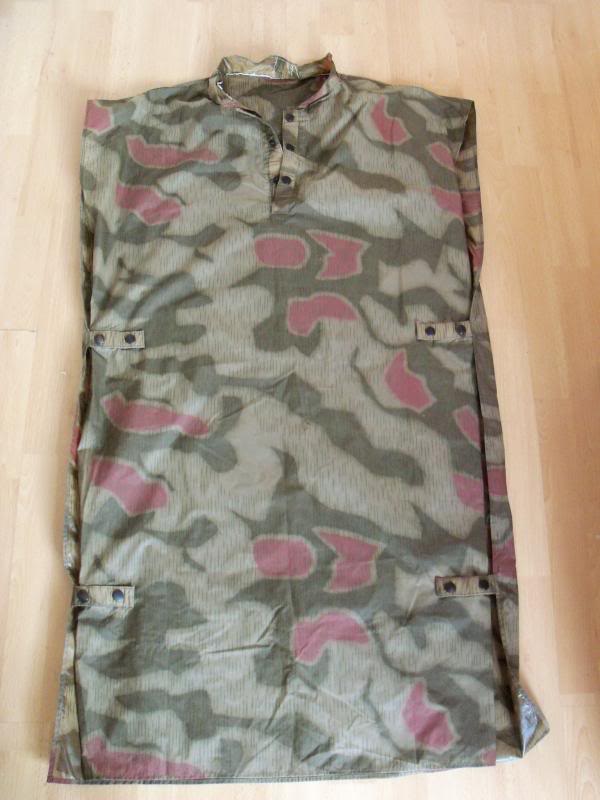 Great tread thunderchild, and thank you Steve for taking me to school

Unfortunately your jacket suffered the fate or most 3rd Model... cut off arm pocket flap. Someone put a lot of effort into the repair, so I give him points for trying

Back is sliced too, which is a less common practice, but still far too familiar. Makes me want to cry sometimes!

These come up for sale on German eBay at the rate of about 1 per week, sometimes 2. About once a month there's one without any demil damage. Ones with the original badging still on them come up only rarely compared to the rest. Going price is around $50, but sometimes a bit more.

The only genuine Sumpftarn hats were made between 1958 and 1962. They are difficult to find and quite expensive. Decent condition ones, with the bullseye and buttons still attached, can go for over $100. The Sturm/MilTec hats were made by the truckload and are still in production as far as I know. They started going on sale in the mid 1980s when Sturm was known as TSR (Thomas Sturm Rothenburg). If you see a M43 style hat it's almost always one of those. What you're looking for has a liner on the inside, buttons and bullseye on the front. And it will be very used.

The wool hat you have is BGS specific, not Polizei. Polizei hats from that time period all had their state badges on them.

steve ,you certainly know your stuff ,i could learn a lot from you so many thanks for the great information ,im glad to know the woolen cap is perfect for bgs display ,here's another west german tunic/jacket ,im really not sure to the time period used as there are no labels present unfortunately  the cresent and shield on the wearers left arm has been carefully removed 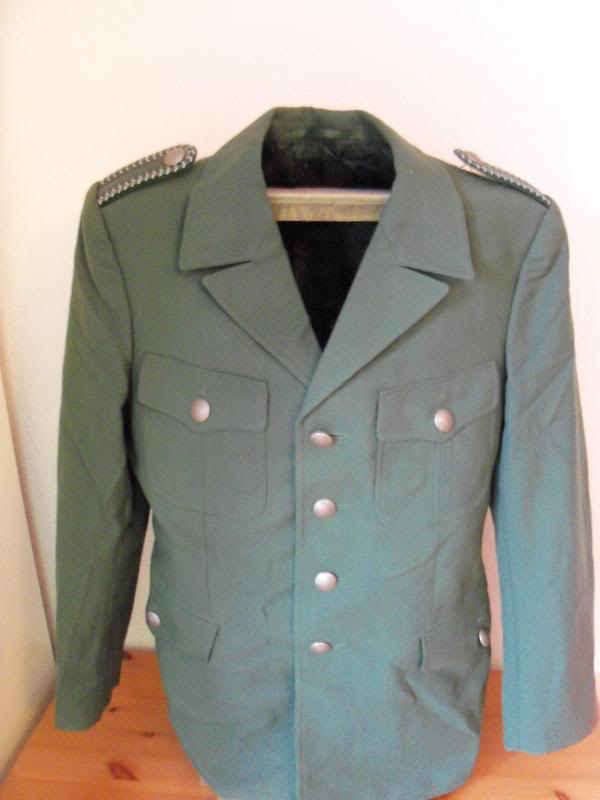 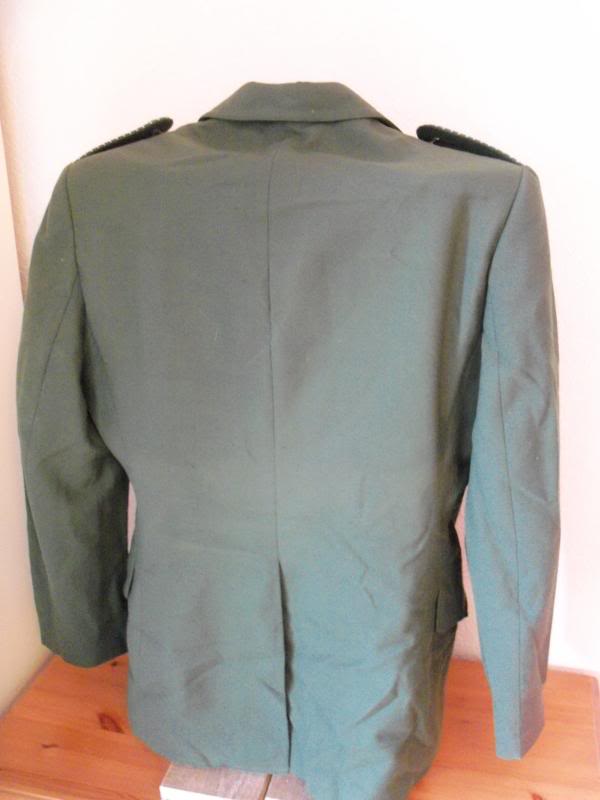 There seems to be a lot of these on Ebay lately and was tempted myself but as yet have resisted it.
Easy Gee

Most impressive display Thunderchild, I really like the concept of the torso, great inspirational idea mate, I am not an expert ( or have a massive passion for BW) but I really like your stuff!!
CollectinSteve

That green jacket is a unified law enforcement post 1976 type, but modified.  The jackets themselves have been sold off by the 10s of thousands as the Germans now have a "blue" (looks black to me!) uniform for all states.  The BGS has since been changed to Bundespolizei, which is best described as a national police force rather than one specifically guarding borders.

Check the inside right chest pocket for a label.  It might still be there, but it might not have a discernible date on it.

The jacket should have collar tabs.  If you look carefully you might be able to see the remains of stitching or the holes.

The shoulder rank and buttons are wrong.  All the green type Polizei/BGS jackets, except for the very earliest ones, had a large cloth "tube" on each shoulder.  The ranks consist of a top part (the rank) and a bottom part (strap) sewn together at one end.  The strap fits into the tube and affixes to the rank at the opposite end so that it is totally secured.  Polizei ranks had buttons to start with and then moved to snaps.  BGS retained their existing ranks and used buttons until something like 2002 when they adopted the Polizei rank.  What they did was either sew the button onto the strap, and then button through the rank, or they used a small metal ring on the button to secure both strap and rank.

And the rank (ironically the same one as above):

In any case your rank is the type used for older service uniforms, which was sewn into the shoulders.  If you look at the shoulders you will probably see signs of where the "tubes" were before being removed.

You can get jackets like this without badges for about $5.  I've got a pile of them, in fact, and I think one or two of them used to be in BGS service.  Although it's 100% the same jacket, the Polizei used larger badges and so it's difficult to change them between between the two because the stitch marks give it away.

just a wee update ,ive finally had time to fully inspect the green tunic ,and low and behold i found this in the top inside pocket ,would i be right in saying manufactured 1979 ,cheers TC 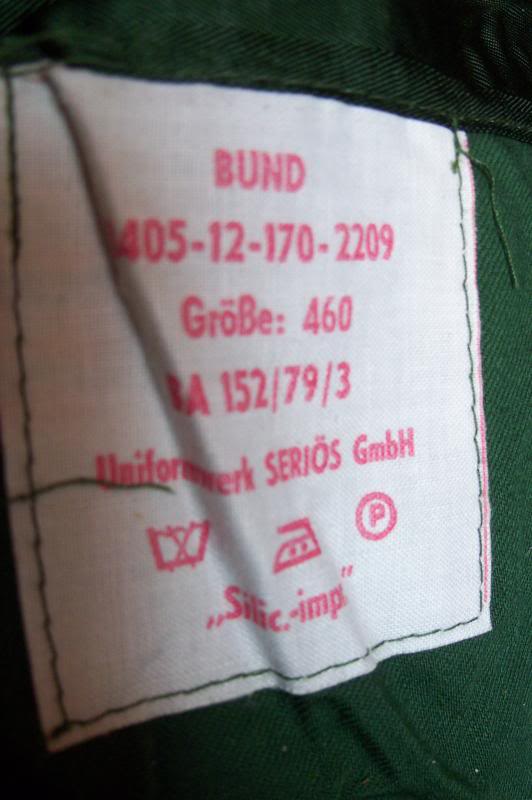 an update to the bw display 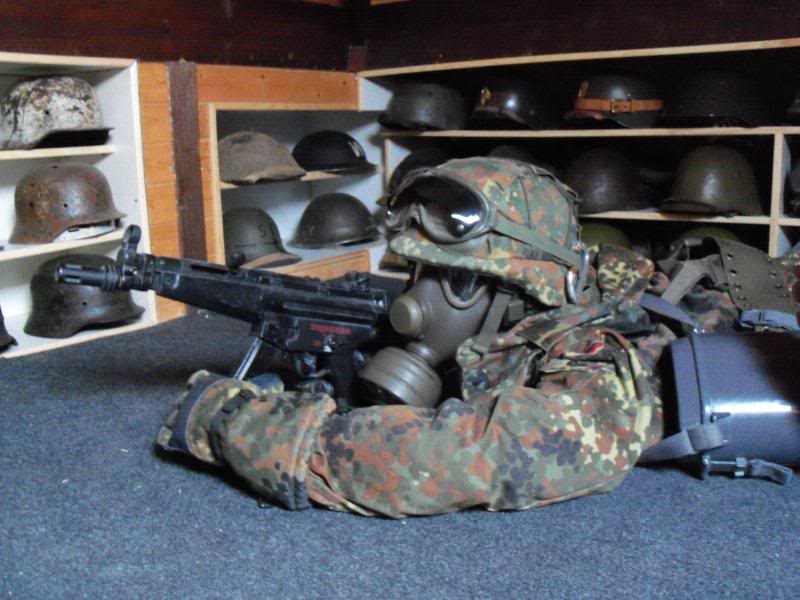 also found this referance pic of the mp5 in use 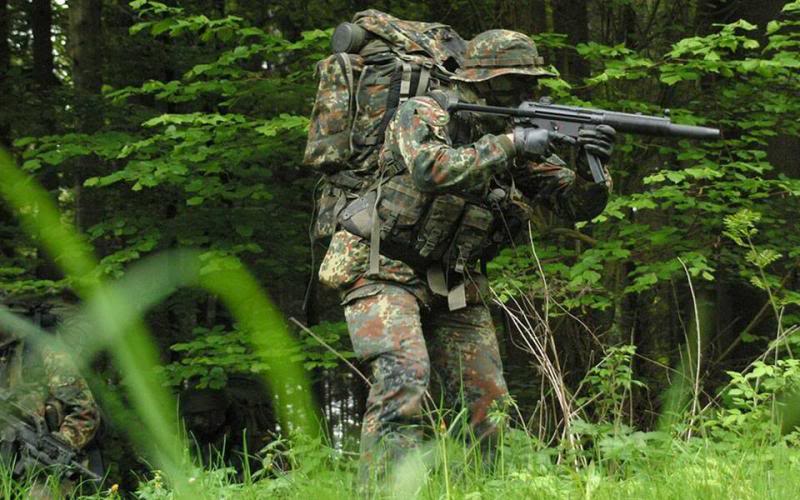