I documented the coveralls I have in my collection.  Quite a surprising number when I look at it!

Coveralls come in two forms with nearly all features the same except:

Frogskin (gray base variant, with some print errors) 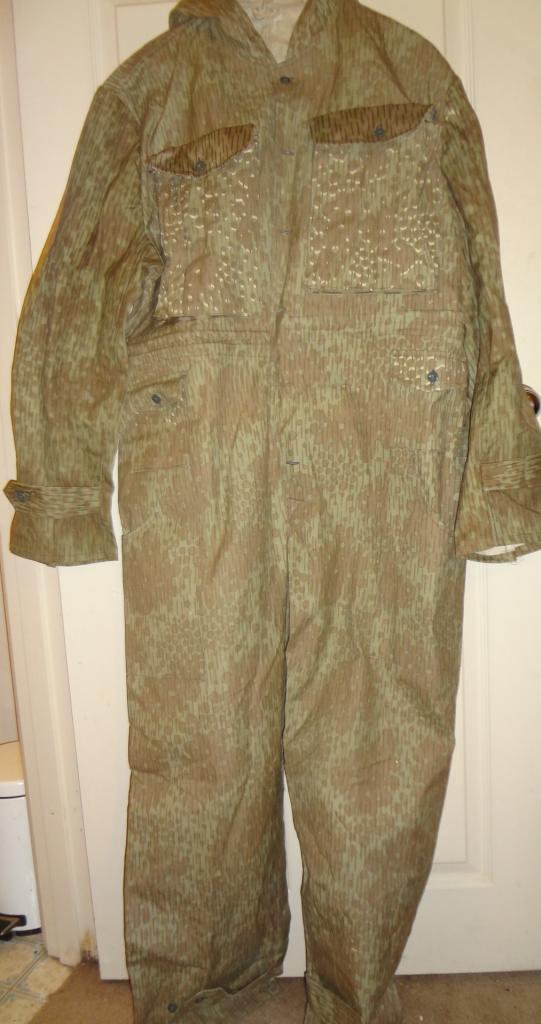 Frogskin (khaki base variant)
No picture

Strichtarn (seems to be DDR material)
no picture

On top of this, I have this oddball.  First is a screen printed Type 2 that is made from reprinted cloth that had bad print jobs (different errors in various parts): 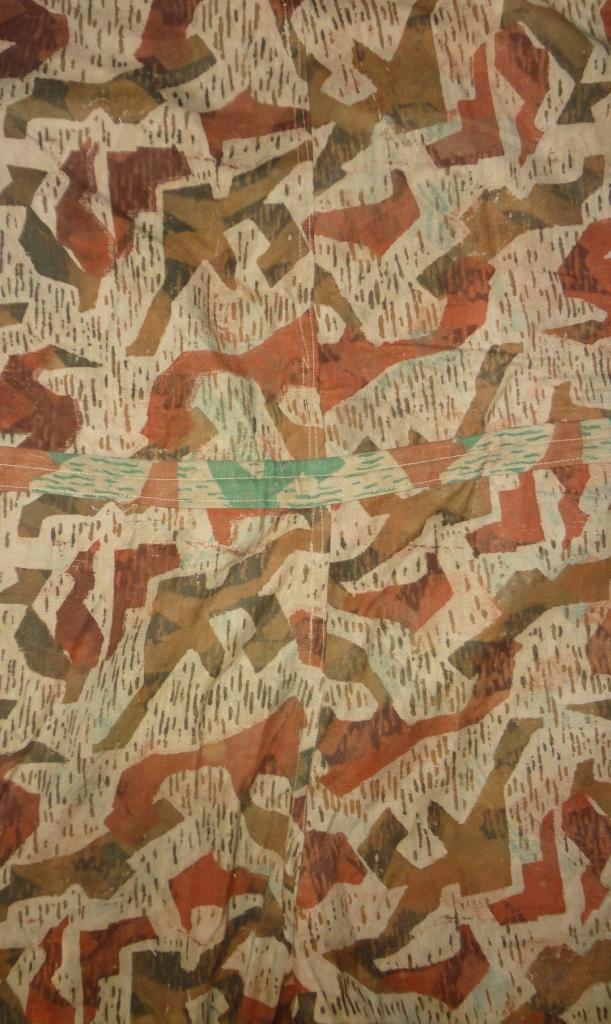 Anybody have any different variations than the ones above?  I wouldn't doubt there are more!

Awesome post Steve, a detailed look at these suits has been long overdue.

The early set is superb, with the highly angular geometric shapes also seen on the very earliest sniper 2-piece oversuits. Is it dated by any chance? I suspect they are very early 50s or perhaps late 1940s production.

One thing I I've noticed however is that the detachable hood suits exist in the later patterns as well. I was told that they were simply an officer's cut version with more magazine pockets on the rear and the aforementioned button-in hood. So I don't think the presence/absence of the hood is a good indicator for issue period.
koalorka

Below is a link to my gallery and a few more pictures of a later set with the removable style hood:

I've updated my descriptions a bit. I've added 3 more types that I know exist but do not have pictures of. Somewhere I have the Snow type and will post some pics whenever I find it.

Thanks for the comments! I think the type with the button on hood is an older design than the one with the attached hood, but there does seem to be some reason to suspect that the two served along side each other. One reason I think that is the more typical Bulgarian splinter pattern example is a Type 1 design, but was issued long after the 1953 style. So I like the theory that there was some sort of functional reason for having the two alongside each other, either for officers or perhaps for soldiers tasked with a particular military duty.

Unfortunately only the 1953 type have dates in them. Based on some guesswork and a little poking around the net I think some rough timeframes are as follows:

Very rough, but at least the order is probably correct.

And a reminder to everybody... Frogskin is 100% identical to Czech Jelici (Rain) pattern in terms of the shapes. And I mean 100% identical. The colors are the only thing that differ.

Great!  Thanks for that Martin!

OK, so it seems we have a few more variants to account for.  I'm also willing to bet that the supposed "Strichtarn" version I saw years ago was a badly pictured version of the Frogskin (Czech Jehlici) pattern.  So I'm going to remove that from my list.

Here's an updated list of all the patterns in rough order of issue:


Here's the updated list of the patterns and confirmed coverall type:

Coveralls come in two forms with nearly all features the same except:

There also seems to be a correlation between date and button style. The earlier types have brown bakelite Communist star buttons, the later simple plastic dish style buttons. You can see with Martin's and my Splinter (with wavy strokes) examples that the patterns bridged the transition from one type to the other, whereas the Splinter (no strokes and screen printed) are always brown button and the Frogskin (all variants) are always dish style. The Snow type is also dish style and was likely made alongside the Frogskin type.

Likewise, it seems that for a while both Type 1 and Type 2 coverall designs were in production side by side, but then the Type 1 was completely dropped in favor of Type 2 only. I think this because I've never seen a Frogskin pattern coverall in Type 1, plus Martin's plastic dish type Splinter (green, wavy strokes) is a Type 2. 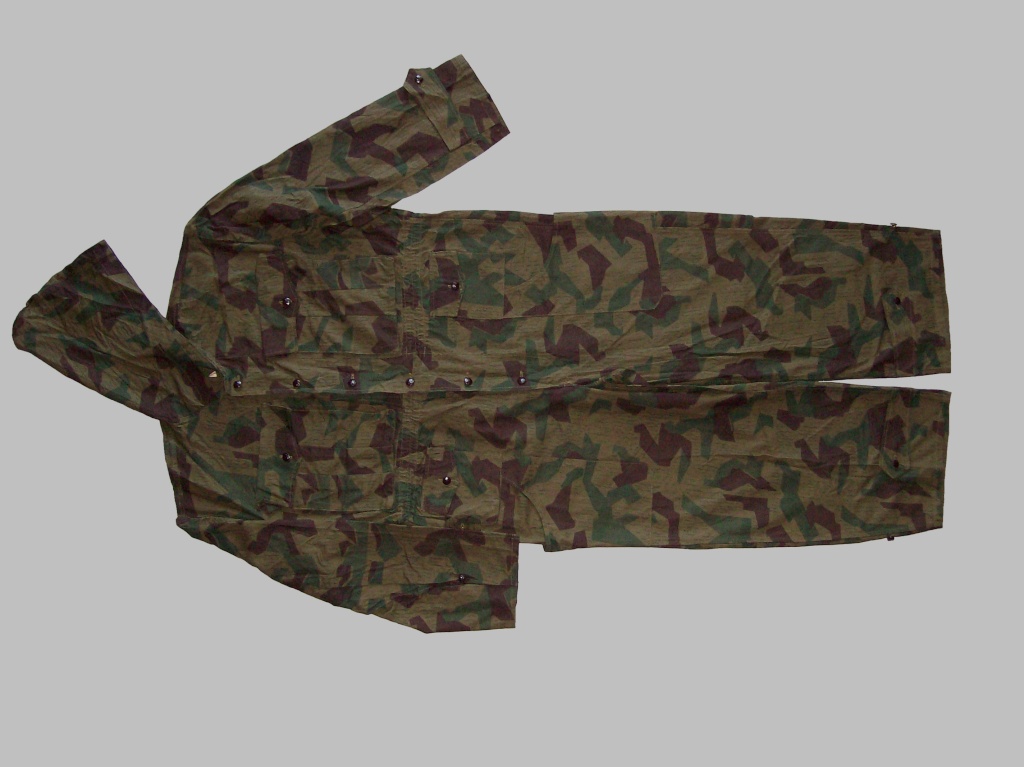 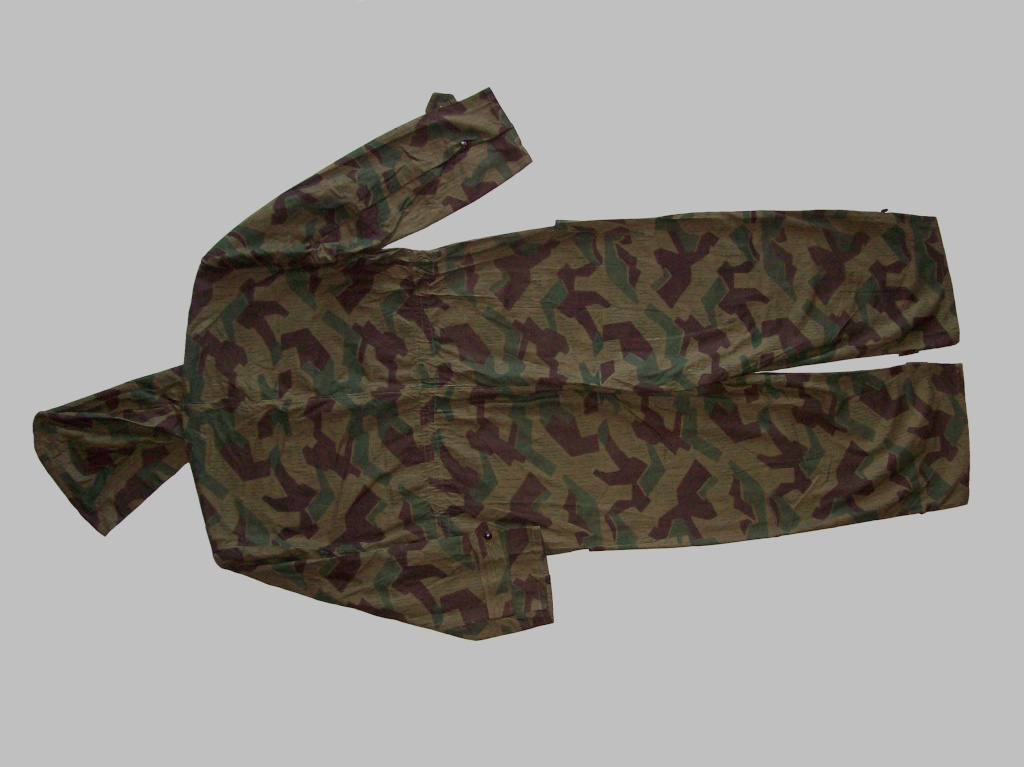 That looks like a Type 2 Green Splinter coverall, yes?

Type 2 Coveralls, Splinter (brown, wavy strokes)
I think it is brown colors, in fact, it is difficult to name the color
A jacket with green colors
Gilles 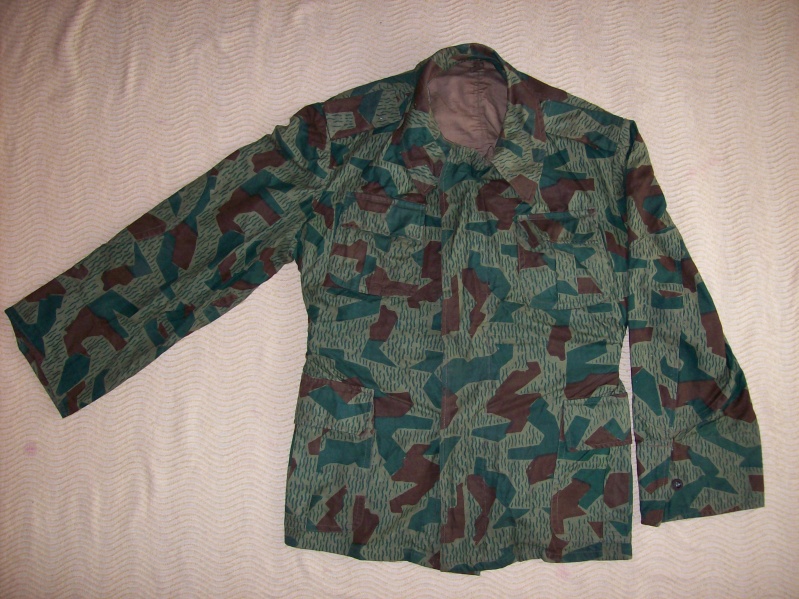 There is some production differences in the colors. I do not think they are intentional. But I agree, there are some items that are not green and not brown. Personally, I think of these as "green" because the brown is very distinct.

Could it be that the pattern called "NVA rain" in the first post by Steve could be the same as the Frogskin khaki base?

Here is a photo of my "rain stripe" Bulgarian coverall: 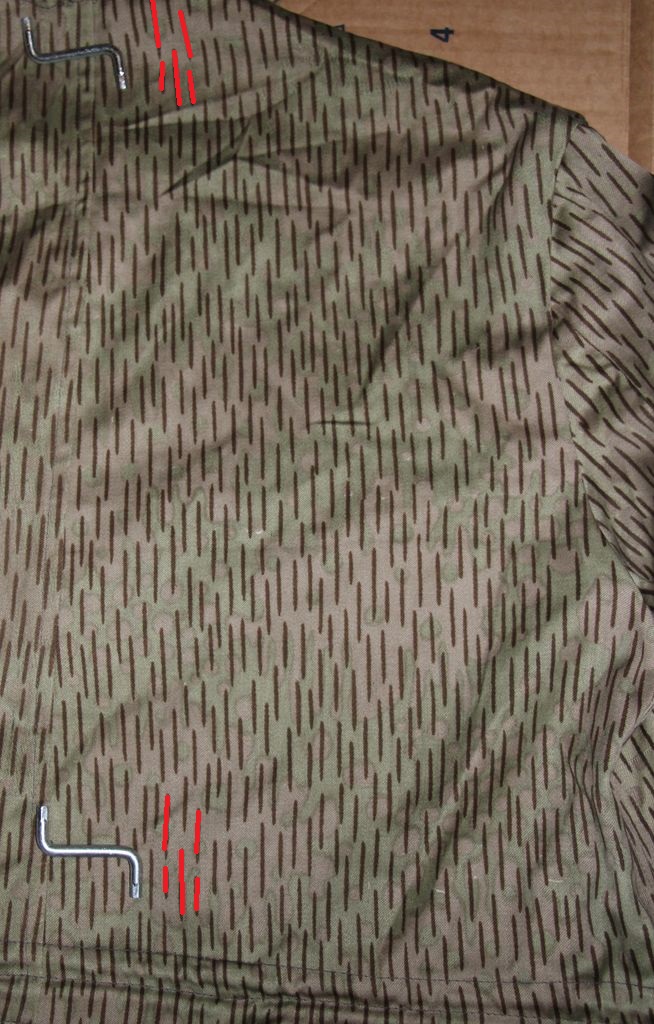 Note that the rain pattern repeats itself vertically at around 37 cms...

But I don't think it is made of NVA clothing - neither is Czechoslovak clothing (despite it has some "concealed" IR pattern - looking like the Frogskin pattern): 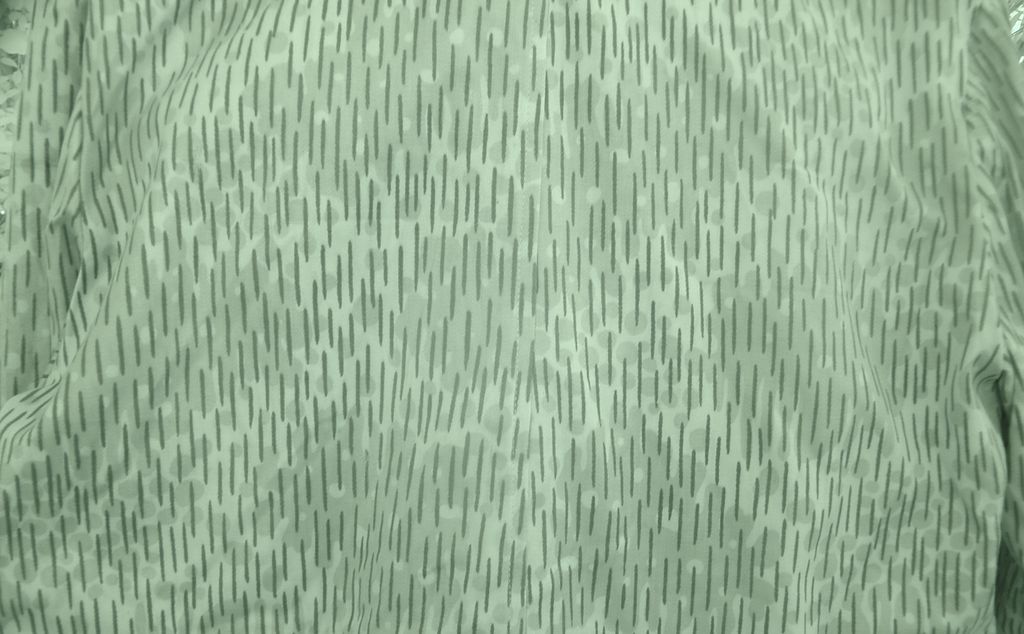 BTW, here is a photo of the Czechoslovak rain pattern viewed in IR light:

I agree with Henrik. My opinion is that the so called "Bulgarian Rain Pattern" is just a different colour version of the "Frogskin Pattern". I have never seen a set of Bulgarian coveralls in just pure rain strokes - it always has the underlying pattern, even if very hard to see. As Steve mentioned, I think it's a result of poor quality photos in which the underlying pattern can't be seen.

In saying that, I'm not sure that the Bulgarian Rain/Frogskin patterns are the same or different to the Czechoslovakian Jehlici pattern - I have never compared them. I too have a suspicion they may be similar... as Henrik has pointed out.
CollectinSteve

I am of the opinion, and Martin seems to think the same way, that there is no Bulgarian Rain pattern coverall.  Instead it's just the a darkly printed Gray (or we could say Brown) Frog variant badly photographed. I've seen no examples of a straight Rain pattern clearly photographed.

The material for the Bulgarian Frog coveralls aren't like anything used by DDR or Czechoslovakia, so for sure it's not the same print run as their uniforms. We also know the Green Bulgarian Frog coveralls were made over a long period of time with fairly consistent coloring, which means at least that uniform's cloth wasn't an accident. I don't know what to make of the Gray Frog pattern.

Somewhere on this Forum I documented that Bulgarian Frog and Czechoslovak Jehlici are 100% identical patterns.  I don't mean inspired by or based on, I mean exactly the same.  Jehlici also comes in two variants with endless print run differences.

I'll see if I can dig up the thread or the comparison pictures I took.

Do we have any indication of when the first Bulgarian camouflage coveralls were introduced?

Here is a photo of Bulgarian paratroopers in 1945: 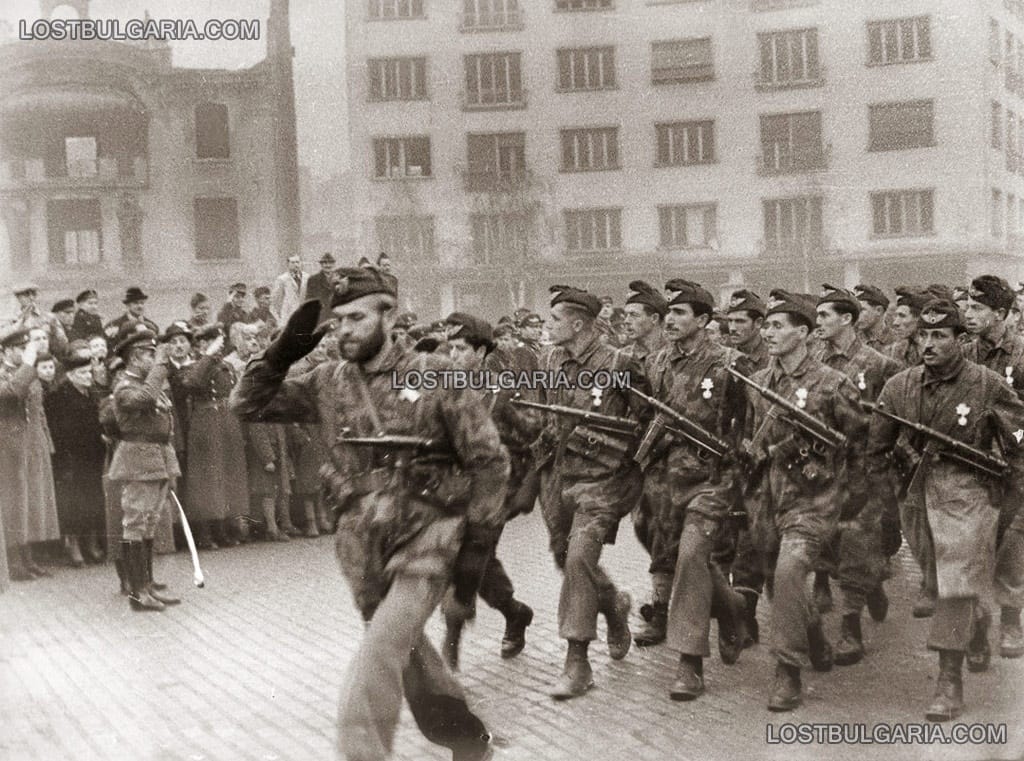 I think the paratroopers are wearing German uniforms, but was this the inspiration for the later Bulgarian pattern?

IIRC we had a discussion on this topic earlier.

Yup, we did have a discussion about this before. IIRC we concluded that the "bone sack" in the above picture (and in others) was of German origins. Other pictures clearly show it is, at the very least, the same design as the famous German type. Of course they also have German supplied MP40 SMGs and magazine pouches. Bulgarians also received a fair number of German AFVs towards the end of the war as well. So it seems that after the war they decided to make their own variation directly because they had experience with the German version.

Here are some photos of the buttons of my splinter pattern type 1 coverall.

There are 4 types/sizes of buttons, 3 of them with the Bulgarian lion with crown! And one saying "FOR GENTLEMEN"...

Of course the buttons could have been added later by someone (perhaps even to raise the value of the uniform...). If they are original I would find it unlikely that these buttons have been used during the Communist rule of Bulgaria. Formally, however, Bulgaria was a monarchy until 1946. Perhaps 1945/46 is the year instead of 1948 for this splinter? (just guessing)

What do you think?

All the best!
Henrik
CollectinSteve

Could be 1945/46, that's certainly a possibility. Unlike other nations in the area, Bulgaria was spared combat on its soil so it's population, infrastructure, and manufacturing capabilities were functional immediate post war.

The other possibility is these coveralls were made with whatever was lying around and it wasn't until later (1947+) that they adopted standard Soviet star type buttons.

I have pictures of a coverall with similar buttons, but I don't know if it is yours or another example

Can you post or link to a picture of yours?

Sorry for the delay - but here is a photo of my coverall: