Canada Experimental DPM in use

Canada Experimental DPM in use

got this pic of a soldier wearing the experimental dpm...

beautiful dpm variant too bad was never adopted... there seems to be 3 or 4 different trials... not all of them were DPM 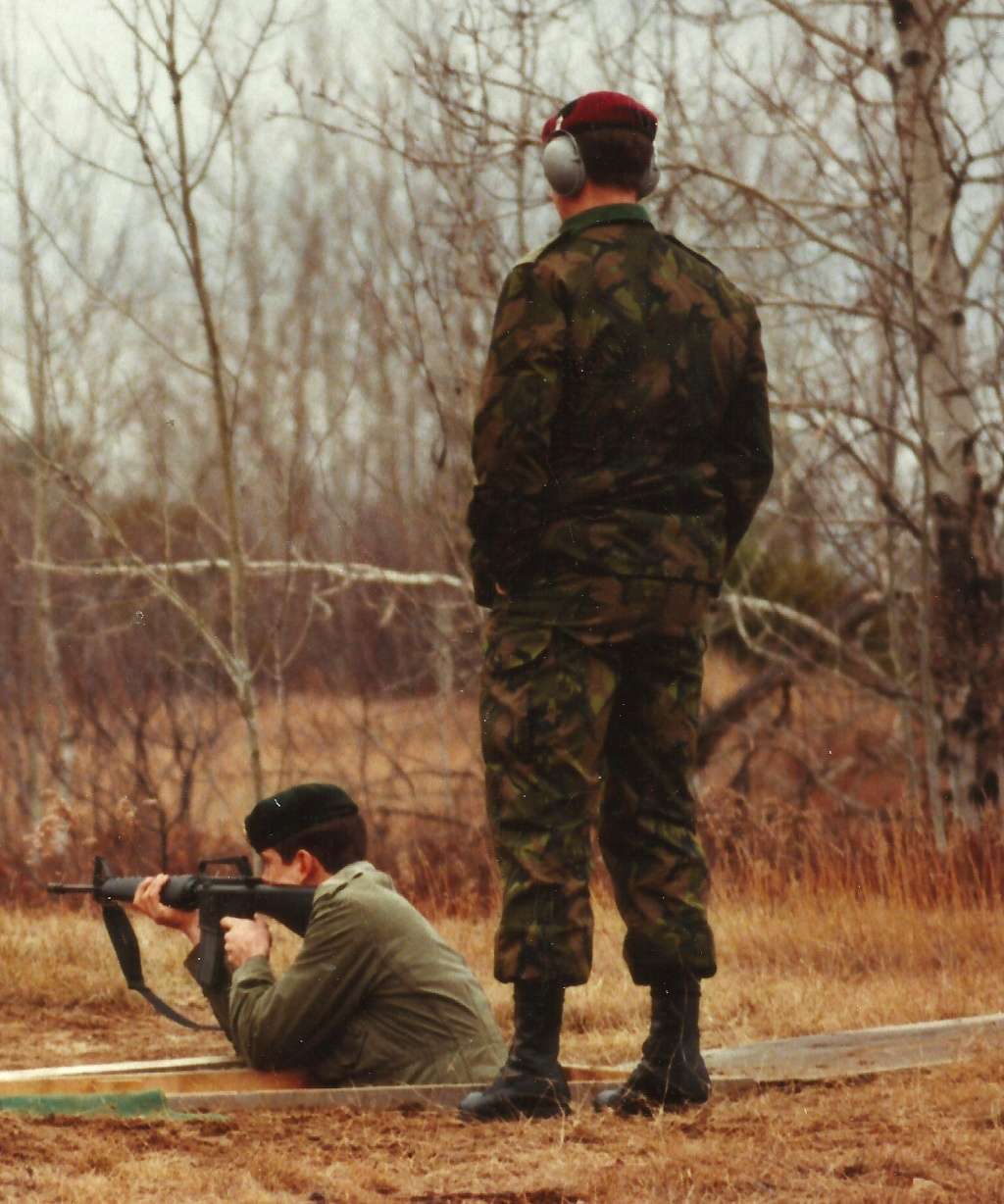 Yeah, there were at least two really cool non-DPM types, but IIRC those were trialed later. A jacket of one of the patterns sold on eBay last year for around $2000.

Here are examples of the trials camouflage combat shirt and jacket.

very beautiful! thanks for posting, i know 2 other variations that are non-DPM, do you have any of them as well?

Yes, I have other patterns; none of which are for sale or trade.
CollectinSteve

Ed is *the* man when it comes to this stuff

What are the dates of the two examples above? On the shirt/jacket, is there much difference in the cut other than the chest pockets? I take it the second one is a field jacket/coat setup to take a liner? I've never seen that one before.

The garments have cotton tags with sizes on them, not dates. The Jacket can take a standard Combat Jacket Liner.
CollectinSteve

Thanks Ed! The tags seem to be missing most of the time and in poor shape when not.

I've seen quite a lot of the so-called "Tanzanian" type, but almost none of any of the other variants. This seems to indicate that only the "Tanzanian" type went into production on a significant scale. Or is it that the Canadians were much better at collecting and destroying trials samples than most other nations?

The modified DPM camouflage was going to be adapted by the Canadian Army and quite a bit of it was manufactured. For some reason, the Army did not go with camouflage and much of the clothing was sold/given to Tanzania who Canada has had close military training and aid ties with. There were quite a few of these garments for sale as surplus in Canada in the late 1970s which probably explains why a fair number have still survived.
CollectinSteve

Makes perfect sense to me. Thanks for the insight.

What about the DPM windproof trousers? Where do they fit into all of this?

Hi Steve and Ed,Danilo and everyone else
Steves question on the windproof DPM/Para trousers is interesting
They are out there-I think Steve you picked up a pair recently,and I have a pair sitting around for years
What is the history on these
The other comment on the trials sets in non DPM.How many were made.It killed me to see that wonderful jacket go for huge money-but what a wonderful pattern
Ed
Would it be possible to see a few photos of these trial sets-just to appreciate what is beyond my reach
Bren
Wolverine

I can add a couple of examples to the ones Ed has shared:

First, a set that has been used at some point by a Royal Canadian Army Cadet. There are no labels or markings on these items, and both the coat and trousers are very similar in cut to the regular OD combat fatigues. There are no storm flaps in the trousers, and the inside coat pocket does not have a Velcro closure. I have a helmet cover for the M1 in the same pattern and cloth. 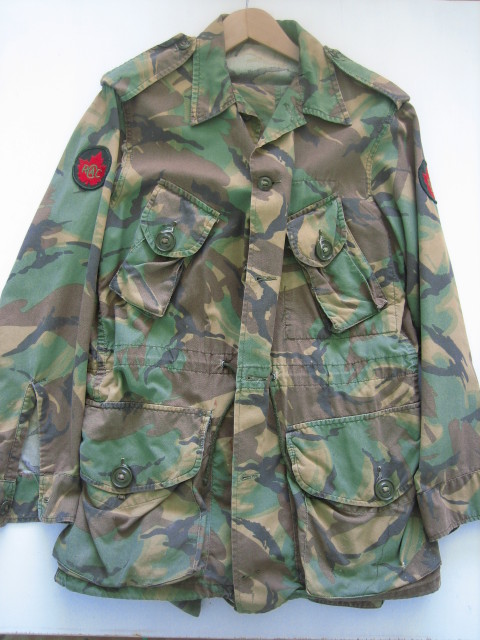 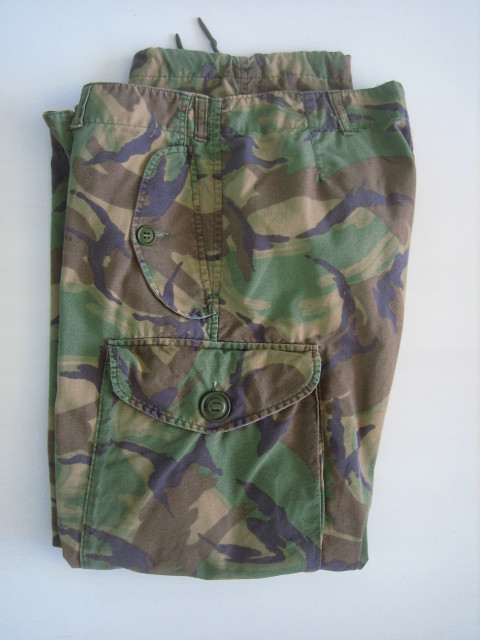 And here is a different type of jacket with a label from Peerless Garments. There is also an ink stamp on the interior. The cloth from this jacket feels similar that used to manufacture the parachutist smock, and the overall design is similar, such as the elasticated pockets. 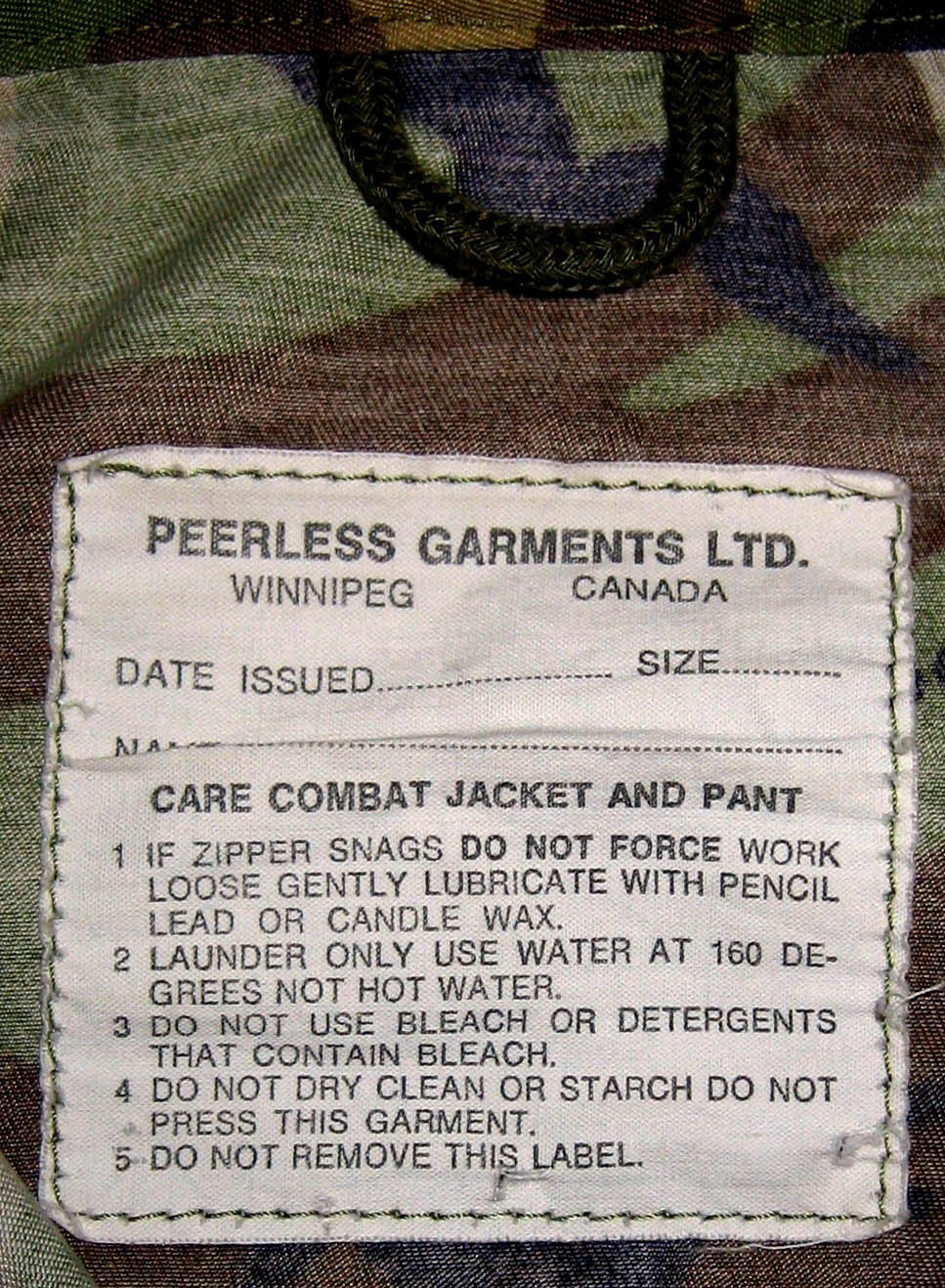 hi andrew, thanks for sharing your pics and for the info.. so you  actually saw cadets wearing the DPM in canada.. here is my set, i labeled as Tanzania, since i know they were supplied to them... but should i move this back to my canadian section?
Also is the cloth on your set same as the regular OD stuff? mine is... 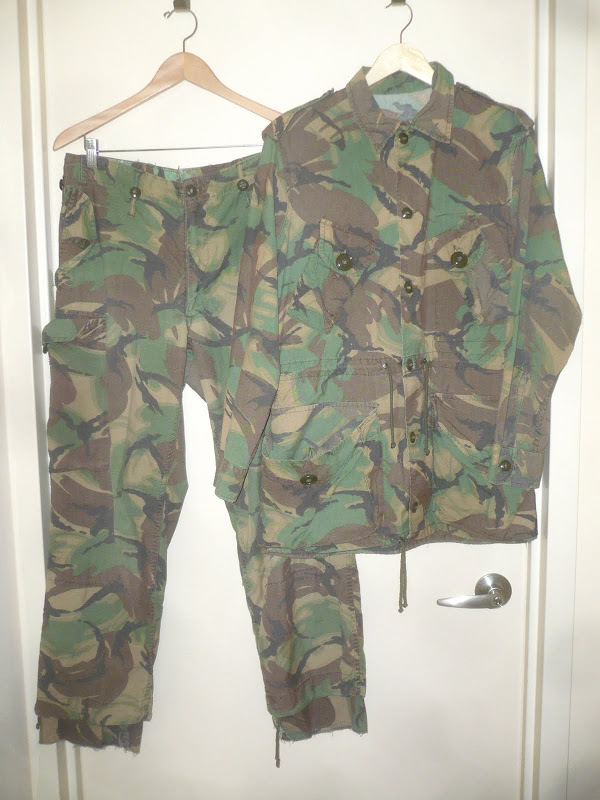 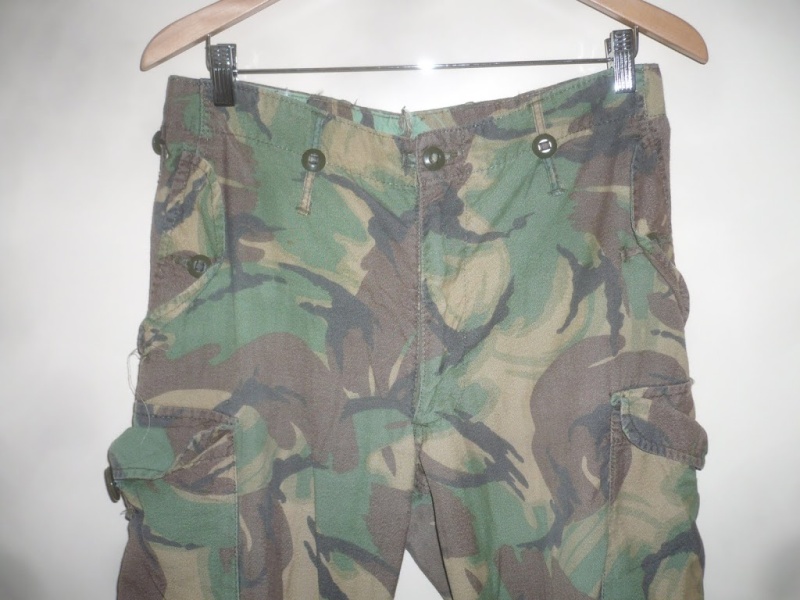 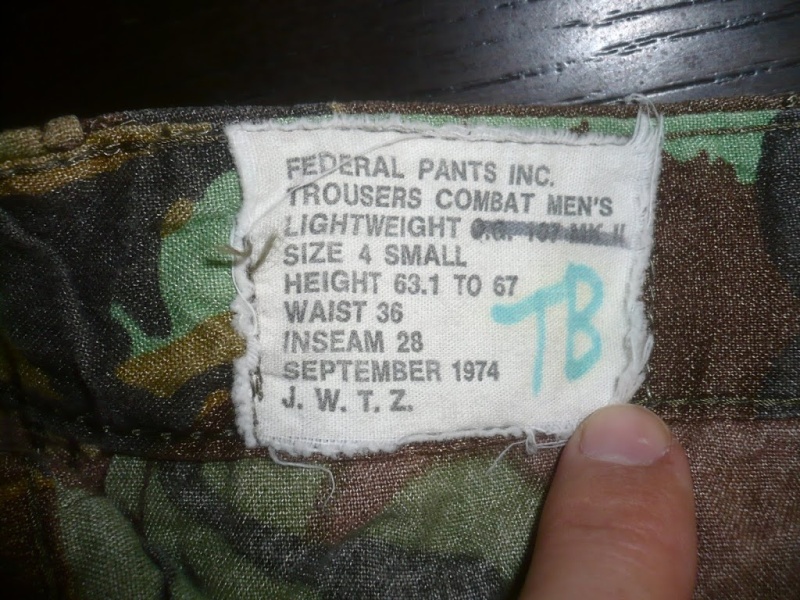 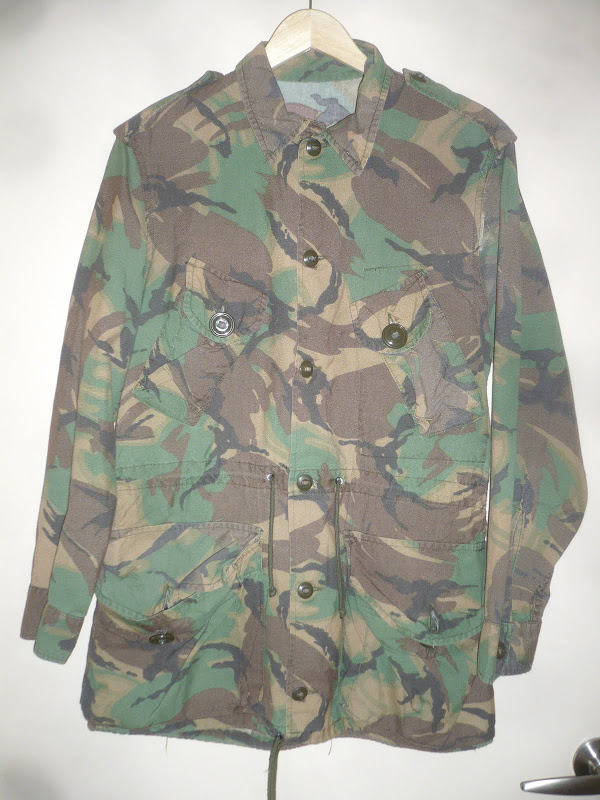 No, I did not see cadets wearing them, but there are RCAC badges sewn to the sleeves.

Yes, the cloth is essentially the same as the OD fatigues.

I do see some differences between your trousers and the pair that I have.
drmatz

yes i noticed the differences too, mostly the belt loops... the good thing the tag survived in mine...

The late 70s early 80s DPM combats we had was withdrawn because of the personal whim of our then Prime Minister (whos name is not mentioned here in Alberta). He was inspecting one of our Infantry battalions, RCR I think, that was paraded in their new DPMs. About a week later orders came down from the PMO that the uniforms were to aggresive and we were to revert to OD combats. Brand new uniforms were turned in and replaced with thread worn old uniforms that QM stores had to scavenge from bins schedualed to go to surplus, and we didn't see new ODs for about a year. As Ed said I believe all warehoused stock was given to Tanzania and all turned in DPM went to surplus stores, thus all the Cadets had had brand new DPM.
edstorey

I have not seen any documentation or imagery that indicates that the camouflaged DPM style combats were ever issued. Yes, they were trialled and to date I have also not seen any documentation as to why they were not accepted for issue. Although Trudeau had a lot of influence on the military, I am not sure if his reach went so far as to dictate if camouflage uniforms were to be approved for issue.

Perhaps someone can come up with a document that will help illuminate this topic further.
Recon369

Yes it was still trial but the very end with issue to be started. But I know I was ordered to turn mine in and that was the reason given. It was replaced with wore out crap and I only got new stuff in June 1980 when I got to Germany and the SSM sent me to QM for new combats and two shiney new crew suits we couldn't get in Calgary.
Sponsored content