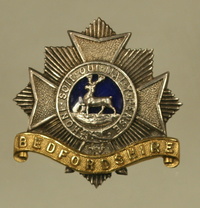 I think most people are familiar with the SHAEF patch introduce towards the end of WW2. However, researching in The National Archives, Kew, UK I found the following:

00.04.45. Draft GO approved a supplementary flash for wear by certain personnel who also wore the SHAEF Shoulder Sleeve Insignia that had been announced 25.03.45.

The supplementary flash was red, with the words ‘SPECIAL TROOPS’ in white. When worn, the top of the flash was to occupy the position otherwise designated for the top of the SHAEF Shoulder Sleeve Insignia, the latter being placed ¼” below the lower edge of the flash.
The supplementary flash was to be worn by personnel assigned/ posted to units or elements listed in the Organisation Chart (published 19.04.45.) under ‘Special Troops’. Enlisted personnel/ other ranks assigned/ posted to detachments of the Headquarters Command, but detailed to permanent duty in Staff Divisions of SHAEF, did not wear the ‘Special Troops/ Flash.
Personnel assigned/ posted to Liaison Agencies also wore the flash as appropriate, conforming to the general rule that staff personnel would not wear it, while personnel operating under, or serving the staff would wear it.

My first question is, has anyone got a specimen that they would allow me to publish a photo of?
Next, would the use of the 'Special Troops' badge have extended to other Allied soldiers apart from US troops, if so, is there any evidence of this.