History
Between 1808-1815
In 1808, there was one Regiment of Dragoons and during the War of 1812 another regiment was raised. Units of both Regiments of Dragoons served in engagements at the Mississineway River; the Battle of Lundy's Lane; Fort Erie and the siege of Fort Meigs. These two regiments were consolidated on March 30, 1814 into the Regiment of Light Dragoons but this new unit was dissolved on June 15, 1815.

Early organization
The precursor organization was originally established by President Andrew Jackson on May 23, 1836, as the Second Regiment of Dragoons of the U.S. Army. Two squadrons were originally raised, one at Jefferson Barracks, Missouri, and one in Florida to combat the Seminole Indians. It saw its first combat during the Seminole Wars, then served on the Texas frontier under Col. David Twiggs. The regiment fought in the Mexican-American War, the early frontier Indian Wars, Bleeding Kansas, and the Utah War.

Reorganized as the Second Cavalry, the unit trained at Jefferson Barracks. Most of its early leadership later gained fame in the American Civil War — William S. Harney, David E. Twiggs, Philip St. George Cooke, Thomas John Wood, Wesley Merritt and Theophilus Rodenbough. {Note: the 2nd Dragoons, whose name was changed to 2nd US Cavalry in 1861, should not be confused with the 1855-61 formation of the U.S. 2nd Cavalry Regiment, which was renamed the U.S. 5th Cavalry Regiment in 1861}.

Civil War
At the onset of the Civil War in 1861, it was recalled to the Eastern theater. For much of the war, it was a key part of either the "Reserve Brigade" or the "Regular Brigade" of the Army of the Potomac and served in numerous campaigns and battles. During the Battle of Gettysburg, the 2nd U.S. Cavalry served under Wesley Merritt and engaged the Confederates south of Gettysburg on the third day.

Indian Wars
Fetterman Massacre (Dec 21, 1866)
Kidder Massacre (July 2, 1867).
Baker Massacre (January 23, 1870)
Battle of Powder River(March 17, 1876)
Battle of the Rosebud (June 17, 1876)
Spanish-American War, World War I and World War II
During the Spanish-American War, the 2nd Cavalry deployed to Cuba, joining Teddy Roosevelt and the Rough Riders, fighting at El Canay, San Juan Hill, Aquadores, and Santiago. The Regiment remained in Cuba on pacification duty for the next three years. From Cuba, the Regiment deployed to the Philippines, participating in the Cavite Campaign as well as fighting the Moro in 1911 and 1912.

During World War I, the Regiment 'saddled up' again, this time under 'Black Jack' Pershing in Europe, participating in several battles, including the Aisne-Marne Offensive. Troops B, D, F and H became the last elements of the Regiment to ever engage the enemy as mounted horse cavalry.

During World War II, the Regiment (this time under the designation of '2nd Cavalry Group, Mechanized') landed in France in July 1944, becoming part of General Patton's Third Army. During this period, the Regiment became known as the 'Ghosts of Patton's Army' due to their ability to conduct reconnaissance, materializing seemingly at will behind German lines. The Regiment made the deepest penetration of the war, arriving in Czechoslovakia before finally linking up with Soviet forces heading west. Under the leadership of Col. Charles H. Reed, the Regiment conducted a raid behind Soviet lines to rescue the famous Lipizzaner Stallions. At the end of the war, the unit was re-designated, yet again, as the 2nd Constabulary Regiment, and eventually the 2nd Armored Cavalry Regiment in 1948.

The Cold War, Desert Storm, and Reorganization
During the Cold War, the Regiment was responsible for guard duty along the Iron Curtain, acting as a tripwire for the long-expected, but never materializing, Warsaw Pact invasion of Western Europe. The fall of the Berlin Wall and the collapse of Communism in Eastern Europe meant the Regiment had to now redefine its role. During this process, the Regiment was alerted for deployment to Saudi Arabia in response to the invasion of Kuwait by Iraq.

The regiment spearheaded the VII Corps end-run deep into Iraq during the Persian Gulf War. During the advance elements of 2nd Squadron, including E Troop commanded by then-Captain H.R. McMaster, destroyed two brigades of the Iraqi Republican Guards Tawakalna Division in the Battle of 73 Easting. The unit earned the Valorous Unit Citation for its service in Operation Desert Storm.

Returning from the Gulf, the Regiment was relocated from Germany to Fort Lewis, Washington. The Regiment's ground squadrons were converted into a light cavalry unit consisting of Humvees mounted with TOW launchers, MK-19 grenade launchers, .50 caliber machine guns and squad automatic weapons (SAW). The 2nd ACR "light" was then sent to Ft Polk, LA in 1992. From here, the Regiment deployed in support of the peace enforcement operation in Haiti from 1995 to 1996. The 3rd Squadron ("Wolfpack") was the first ground unit to deploy and operated under the 25th Infantry Division in Port au Prince, Haiti. After six months in Haiti, 1st Squadron arrived to replace 3rd Squadron.

Bosnia service
In April 1997, the Regiment received orders to be prepared to deploy to Bosnia and Herzegovina. Following the first Mission Rehearsal Exercise held at the JRTC in June, the unit moved to Germany to begin integration with the 1st Armored Division. Meanwhile, all its equipment was shipped to the Intermediate Staging Base at Taszar, Hungary.

The Regiment's participation in Operation Joint Guard began when the 2nd and 3rd Squadrons moved across the Sava River into Bosnia in August 1997 to augment the First Infantry Division (Forward) in support of Bosnia-Herzegovina's municipal elections. The Regiment's air cavalry, the 4th Squadron and the Regimental Support Squadron also moved into the country. The Regiment's separate companies — the 502nd Military Intelligence Company, 84th Engineer Company, H-159th Aviation Maintenance Company, and the Air Defense Battery — completed the Regimental troop list.

While the ground squadrons were in Bosnia, the Regimental headquarters deployed to Germany to train with the First Armored Division Headquarters in preparation for assuming command in Bosnia. During August and September, the Regiment was spread across five countries on two continents, and was under the direct command and control of three different general officer commands. This period included another first for any army unit during a 12-month period: the Regiment participated in major training exercises at all three of the Army's Combat Training Centers: The National Training Center (NTC) at Fort Irwin, the Joint Readiness Training Center (JRTC) at Fort Polk, and the Joint Multinational Readiness Center (JMRC) at Hohenfels, Germany[1]. In October the remainder of the Regiment rode into theater, assuming responsibility for the American sector of Multinational Division (North), which stretched from the war-torn bridge at Brcko in the north to the shattered city of Srebrenica in the south.

The first major action of the Regiment in Bosnia was the seizing of Serbian radio-television towers to control communications into the Republika Srpska. Other significant operations that the Regiment conducted include: the restructuring of the Republika Srpska Specialist Police; the creation of the first multiethnic police department, in the city of Brčko; security for the announcement of the Brcko Arbitration Decision (an effort to resolve the status of this Serb-dominated city within Bosnia); institution of common license plates and currency in Bosnia, and the opening of the Bosnian rail system. In conducting operations in sector, the Regiment executed an estimated 12,500 patrols and 480 weapon storage site inspections, supervised the removal of over 12,000 mines, and oversaw 350 training exercises for the former warring factions. The Regiment served one of the longest tours of most military units there.

The 21st century
The Regiment relocated once again, after returning from Bosnia, this time to Fort Polk, Louisiana where the unit remained until deployed again to the Gulf, this time for Operation Iraqi Freedom, remaining for a total of 16 months. The Regiment was required to fight against insurgent forces in areas ranging from Baghdad to Najaf to Al Kut. On its return from combat operations, the Regiment found itself heading back to Fort Lewis in Washington in December 2004. The Regiment was re-designated the 2nd Cavalry Regiment and reorganized as a Stryker Brigade Combat Team in April 2005.


A Stryker from the Cavalry Regiment participating in a Joint Task Force-East training exercise at Novo Selo Training Range, Bulgaria, Sept. 3, 2009.On June 1, 2006 at Fort Lewis, Wash., the 2nd Cavalry Regiment and the 1st Brigade of the 25th Infantry Division conducted a joint reflagging and casing ceremony. The 2nd CR was reflagged as the 4th Brigade, 2nd Infantry Division (Stryker). The 1st Brigade, 25th Infantry Division cased its brigade colors and was reflagged as the 2d Stryker Cavalry Regiment. The Army restationed 2SCR to Rose Barracks, Vilseck, Germany — near the Regiment's Cold War home of Nuremberg — as of September 15, 2006. With a foundation of infantry-based tactics and the mobility of the Stryker vehicle, the Stryker brigade has become more of a hybrid unit, filling the gap between pure, light infantry and the mechanized, heavy infantry. This move now truly describes the soldiers of the unit as 'Dragoons' - mounted infantry.

On May 8th, 2007, the Department of Defense announced that the 2d Stryker Cavalry Regiment would deploy to Iraq in support of Operation Iraqi Freedom in August 2007. 3rd Squadron (Wolfpack) with Nemesis Troop of 4th Squadron attached along with Eagle Company, 2nd Squadron (Cougars) were very successful in rooting out Al-Qaeda forces from their last stronghold in Baghdad's Hadar neighborhood in East Rashid. 1st Squadron participated in the final clearance of Sadr City. The regiment served a 15-month tour in Iraq in both the Baghdad area and later Diyala province. The Regiment did not fight as a whole for most of the time leading to diverse squadron histories and experiences. It was at its most consolidated by June of 2008 with all but 1st Squadron in Diyala. On November 25th, 2008, the 2d Stryker Cavalry Regiment was officially welcomed back to Vilseck, Germany.

Patches from left to right:
Color, Subdued, Desert (Taiwanese Made) 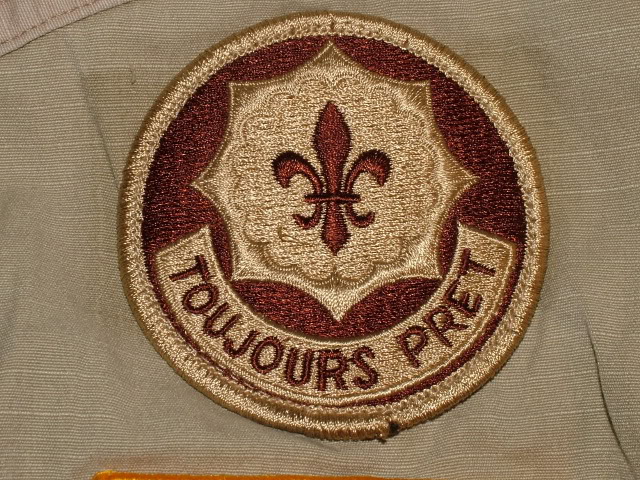