Picked this up over the weekend. Never thought it'd be as old as it is, but I'm happy!!

49th Regiment of Foot collar badge. Probably mid 1870's-early 1880. The regiment was formed in 1744 in Jamaica from 8 independant companies that were garrisoned there and named after it's colonel, Edward Trelawney as Trelawny's regiment of Foot, No.63. It was re-numbered the 49th in 1751. The unit was in Boston at the beginning of the American Revolution and fought in several battles during the war. It returned home and served during the French Revolution, and returned to British North America during the War of 1812. After the French Revolution of 1816, the regiment was given Royal association and served during the 1st Opium War(1839-42) and The Crimean War(1853-56). The regiment was amalgamated as part of the Childers Reforms and combined with the 66th Berkshire Regiment becoming the Princess Charlotte of Wales's Berkshire Regiment. After the Battle of Tofrek in Sudan in 1885, they were awarded the title of Princess Charlotte of Wales's Royal Berkshire Regiment. 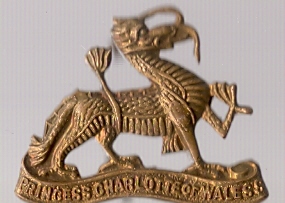