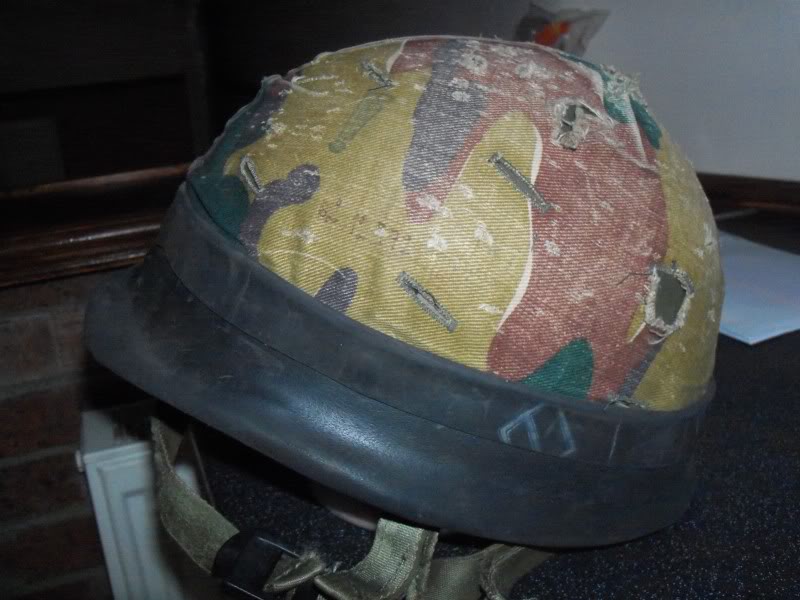 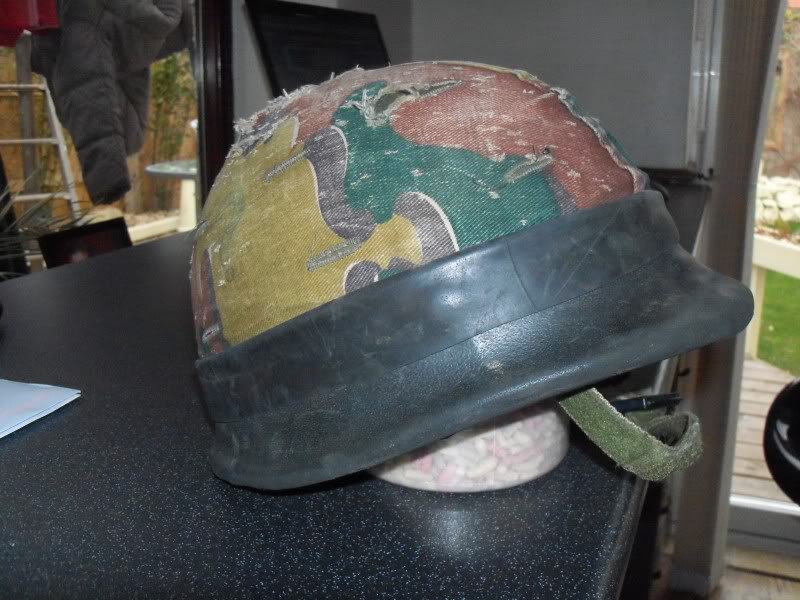 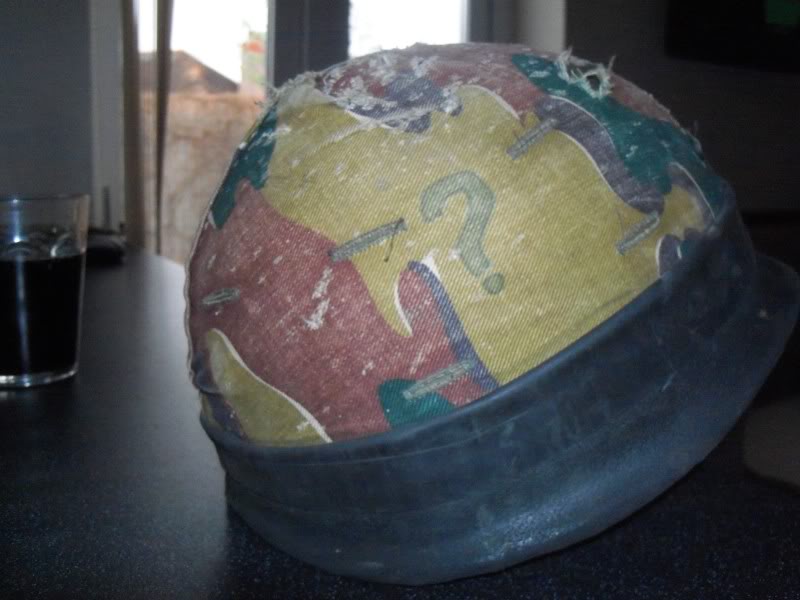 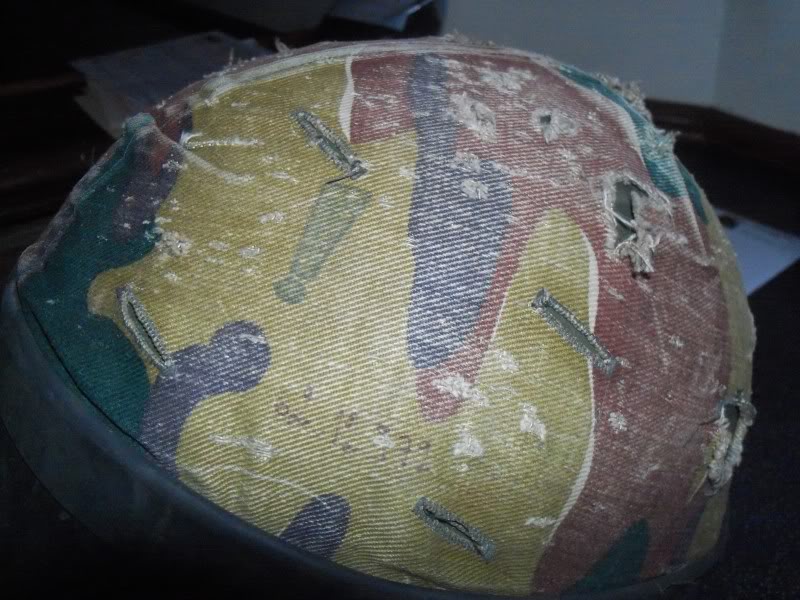 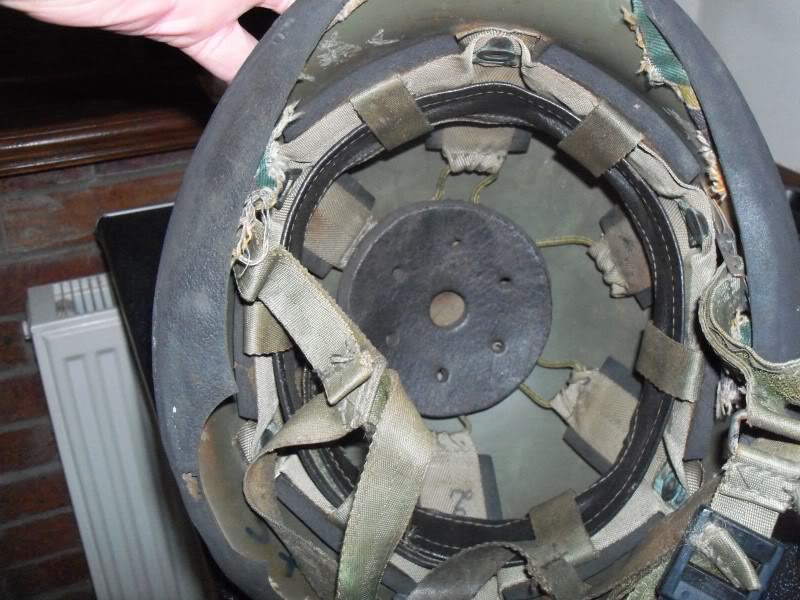 Never seen one of those before-I LIKE it.
Guest

thank you gulf ,im really liking this one it has a been there look about it the closest reference i could find on the tinterweb is these examples 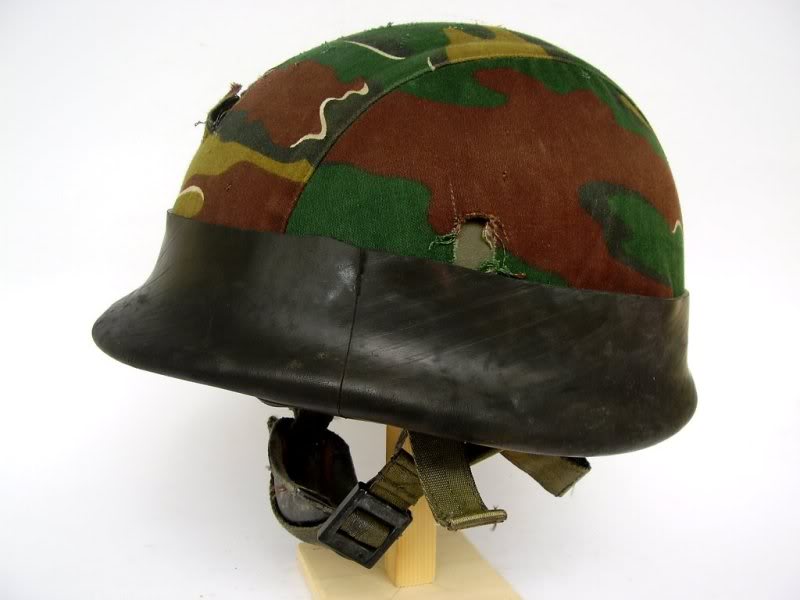 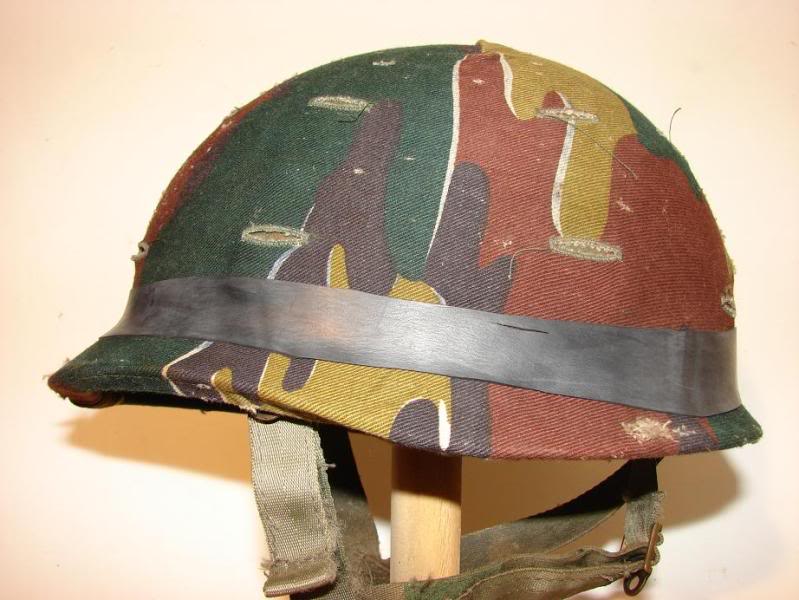 VERY nice find. Those helmet covers are near impossible to find. Looks like 1970s cloth.

many thanks steve i know what you mean ,ive waited a long time to find one and thanks for the info on the cloth

Before we went to the kevlar type helmet in 1993, we were never issued any helmet covers in the Belgian Army, only nets - period! ( Except for 3 Para).
Covers were home-made from sandbags, cammo hoods from older smocks, cammo shelter halves etc.
Also, whatever available other nation's helmet covers were procured on an individual basis...US ERDL, MITCHELL and WOODLAND M1 or PASGT, UK etc.
In the early 80's 3 Para had some made for the battalion. They had a very distinct commercial pattern, nothing like any other military ever used before. I still have one that I will try to dig up.
Being the Platoon Sergeant in the 90's, I had everybody to wear the same US woodland PASGT cover. On top of that everyone had a removable cammo net with burlap and strips of old cammo cloth.
We made the removable so we could get rid of it when training in urban terrain.

And one last thing: at the Para-Commando Brigade we were issued 2 helmets each; the one depicted here was for jumping and the PASGT type was to be worn once we hit the ground and on firing ranges - so we carried both into combat/exercise...go figure!
It appeared that we needed the protection of the PASGT but it was too wide and caused injuries when jumping the French type TAP parachute.
CollectinSteve

I would love to see a picture of the 3 Para cover. Sounds interesting!

Interesting detail about jumping with two helmets. I don't think I've ever heard of anybody doing that. Certainly your old steel helmets were better for jumping than the Kevlar type, but two helmets? That's a very odd solution.

I will take a picture of mine and come up of a pic 3 Para soldiers wearing them.
The 2 helmet situation went on for years until they decided to adopt the US MICH type helmets.
I don't know if they still use the PASGT Type though.
flashesandovals

flashesandovals wrote:I will take a picture of mine and come up of a pic 3 Para soldiers wearing them.
The 2 helmet situation went on for years until they decided to adopt the US MICH type helmets.
I don't know if they still use the PASGT Type though.

Interesting! It looks similar to the Jigsaw variation used by Zaire.

I have an M71 Para helmet, (which is what this also seems to be.) When I get permission to post, I will put up some photos Mine is probably a bit later and is one of those that got the French suspension system fitted.
Sponsored content