These are two distinctive different patterns that are often confused when people describe them.
In Vietnam uniform collecting there seems to be this habit of calling the South Vietnamese Ranger pattern, ERDL. While they are similar they are also very different.
When you look at vintage photos, you will see lots of great images of ARVN Rangers and later in the war LLDB (Special Forces ) / Airborne Rangers wearing this pattern.
It comes in two style, a light weight poplin and a heavy weight cotton. They are also in two cuts, a two pocket and a four pocket. Most four pockets you see in the heavier weight material. 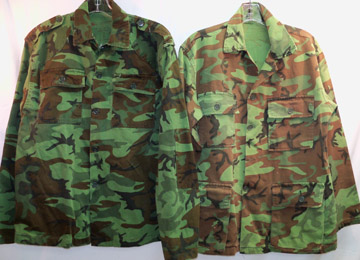 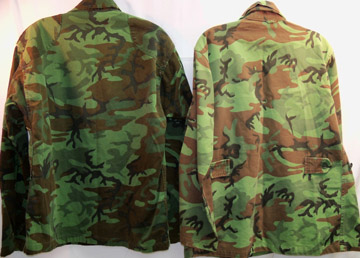 South Vietnamese ERDL pattern.
The majority of vintage photos you see of ARVN troops wearing this pattern are usually Airborne troops. But, like the BDQ you will see a lot of Americans wearing this pattern that have nothing to do with these units.
Usually the ARVN ERDL is in the lime green pattern, and can be found in poplin and ripstop.
Same as BDQ pattern they will come in a two pocket and a four pocket cut. 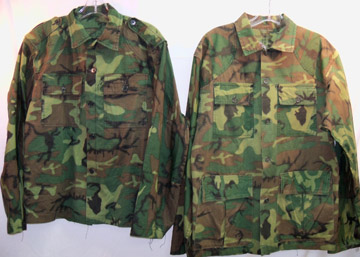 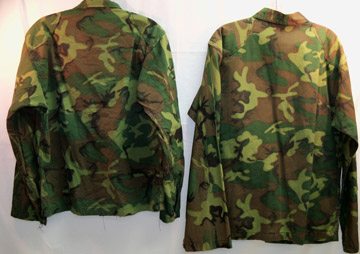 Massive print flaw on the left shirt, from left to right just along the armpit line
vintageproductions

No flaw at all in the pattern, just the lighting in the photo.
_________________
ASMIC Executive Vice President
thefallenbuddha

Helpful information, Bob!
I just wanted to add some photos.
As Bob mentioned, the Ranger pattern was most commonly associated with Rangers, and the ERDL with Airborne.
But, as he also stated, the use of each pattern was not exclusive to each of these branches.
Especially as time went on, into the 1970s, these patterns were seen more broadly in use by troops of different branches (and also back and forth within the same branch).
Here are just some example photos: 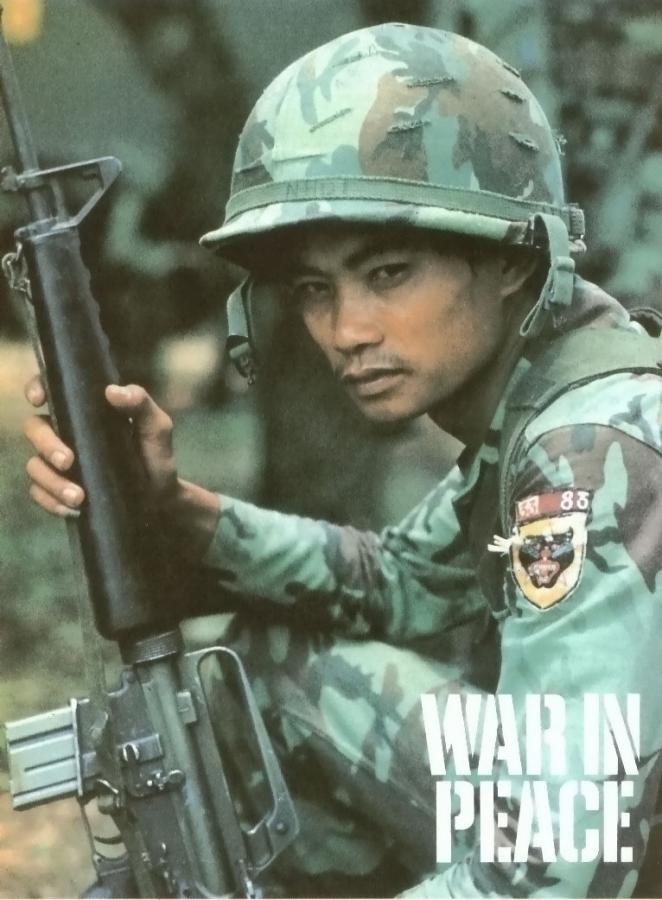 Airborne troops in ERDL during the Tet Offensive. 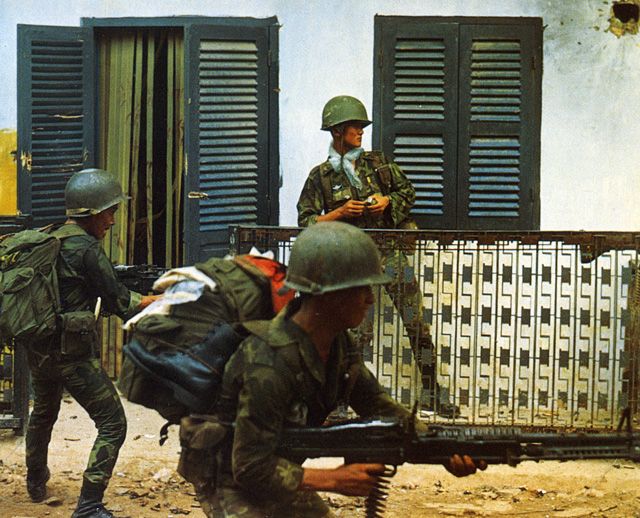 RVN Ranger officers at a wedding in the 1970s (four pocket shirts - two at left are in ERDL, one at right in Ranger). 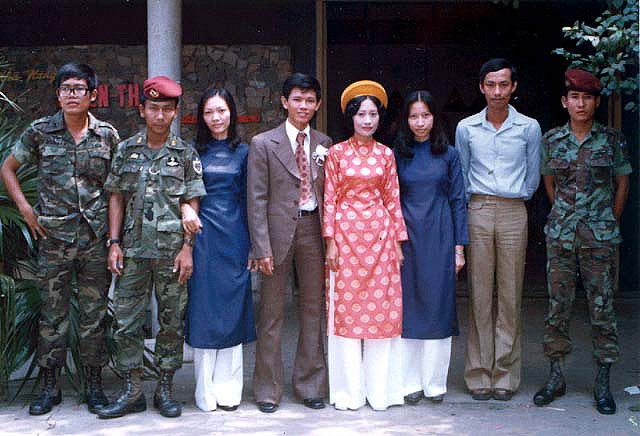 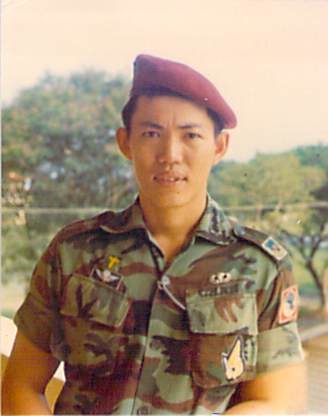 Later in the war, Marines used both patterns too.
Marines (1972), two front figures are in Ranger camo. 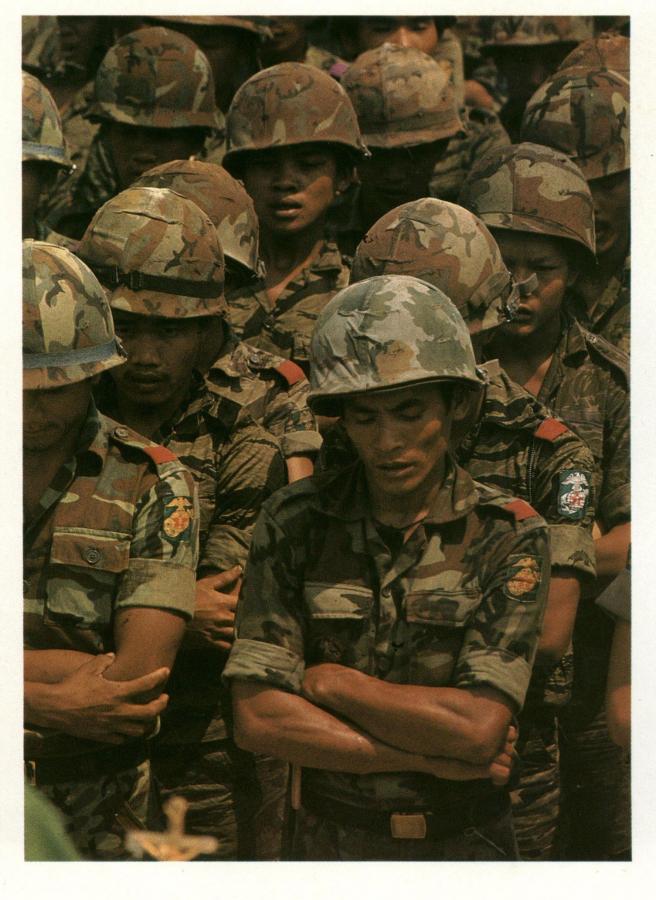 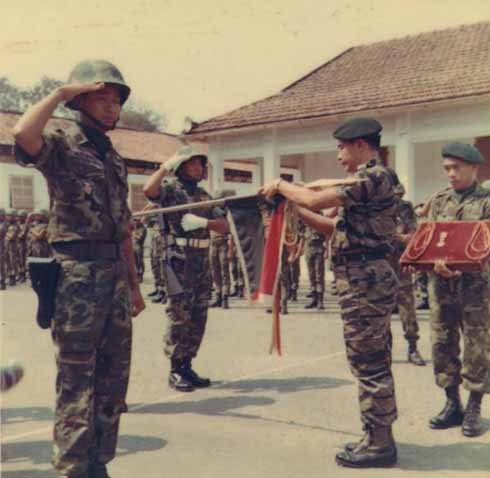 Woodland is one quarter bigger .

Great stuff! So what is the history of how these two patterns came about and where each went over time? Did BDQ come about after ERDL?

I'm also getting confused by "Woodland" use in this context. As a non-Vietnam guy, Woodland to me is specifically M81 and is MUCH larger than ERDL. The late 1970s produced the "transitional" uniform which started out in surplus ERDL cloth, then changed into something a little different, which then was blown up to become M81 Woodland.

So when I'm seeing "Woodland" mentioned in the context of Vietnam stuff, what is it in reference to? Cuz I'm confuzed

Ah. So this is where I've heard that ERDL was a ARVN pattern before it was US? What they really mean is ERDL was developed from BDQ?

Not really.
From the way I understand it ERDL was being tested by Nattick in the late 1940's. The exact date, I can't remember right now, but I think it is in Stanton's book.
I agree the ARVN's had the BDQ pattern printed and being used before the US ever issued ERDLs.
_________________
ASMIC Executive Vice President
kammo-man

Agreed with everything said so far.

I believe the Invisible ERDL leaf pattern was the original.
US designed in the late 40s ......tested in Vietnam
Re-designed in the US in 66 then produced in 67 hard strike poplin
Re-designed again soft strike poplin
then put on rip stop
From here it gets messy as there was a brown dom print.
Different manufactures printed different dye lots ...........
I personally know of 6 .......but I am sure there are more out there ....
Scale of ERDL changed once .........but only the black made the transition
owen
CollectinSteve

Of the 6 manufacturing variations you're aware of, Owen, are they in both color variants (brown an green), or more towards one than the other? During the late 1970s someone produced a bad batch of cloth for the "Transitional" uniform that tended to wash/wear to a kinda purple tone. Really kinda nice looking, but obviously unintentional.

All just in brown dom.
With many manufactures the spec was not ironed out regarding color here !
I have seen jackets with 4 different ERDL prints all in one coat ...crazy.
CollectinSteve

Heh... yeah, I've had some of those mix and match pieces too. I've never had enough in my hands to notice significant color differences within either range, but that might explain why sometimes it's a lot harder to tell the difference between well washed/worn the brown and green variants while other times it's so obvious it slaps you in the face.