Ok, so I originally purchased this as an "experimental South African chest rig", which seemed reasonable to me because of the number of variations on SA equipment used by various special forces and other groups, and it looked vaguely in that style, so I decided to take a chance. The fact that it had really weird buckles didn't register to me at the time. After a little research, I seem to have reached the consensus that it is from the former homeland of Bophuthatswana, so probably NOT used by any special forces. However, some people claim to have had a few that have come to them through contractors working in Africa. But I digress, let is see the rig in question: 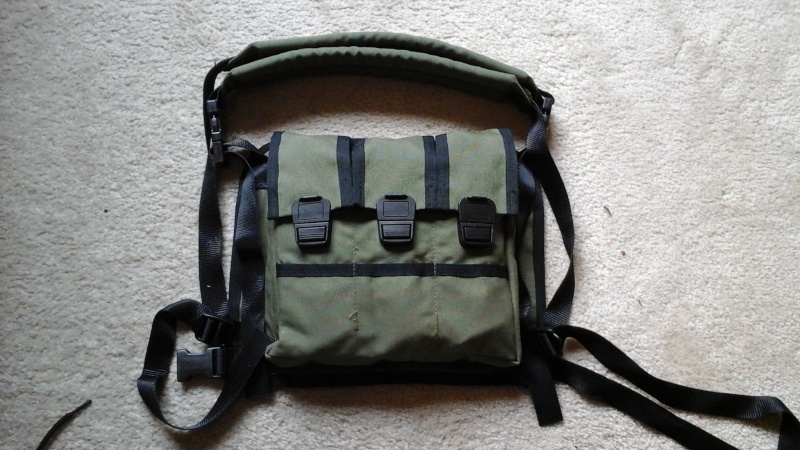 Pretty bare bones basic, 6 mags of AK style or equivalent, probably R4 or R5 would work too. About the only feature that puts it above the standard P83 is the adjustability. The buckles are silent compared with the P83's Velcro, but I prefer the later ALICE style buckles much better. These were probably locally made in Bop. 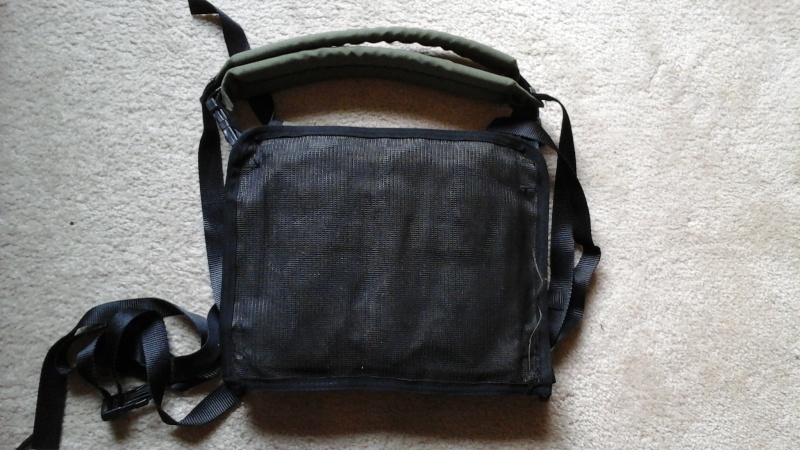 Actually, I lie. One other feature is a boon, it has mag retention straps that function as quick extraction straps as well. And yes, they actually seem to work. 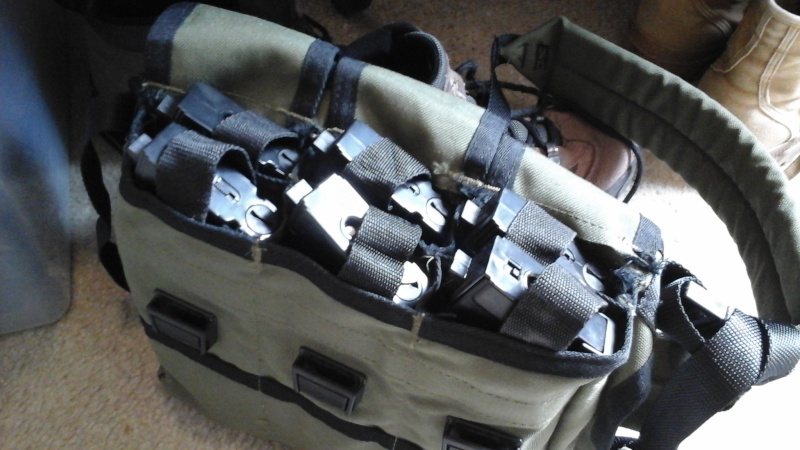 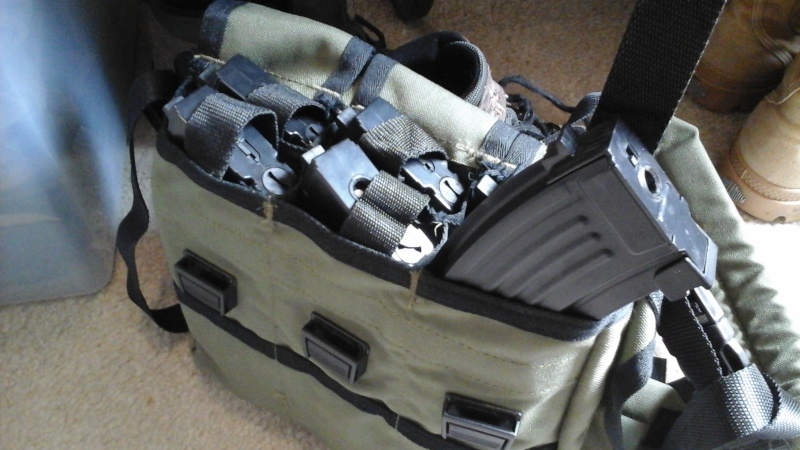 So, verdict? Don't throw away your P83 for practicality. Supposedly this rig fit into a modular system. I have seen some other parts, so I can believe this. I can imagine the practicality of having a rig carry extra mags that could be shed in a hurry.

But how about collectability? Apart from homeland defense force collectors out there, who on earth would want this rig? At least that is what I thought until I took another look at a well known photo. Do the buckles on the chest rig for the guy at the far left look familiar? 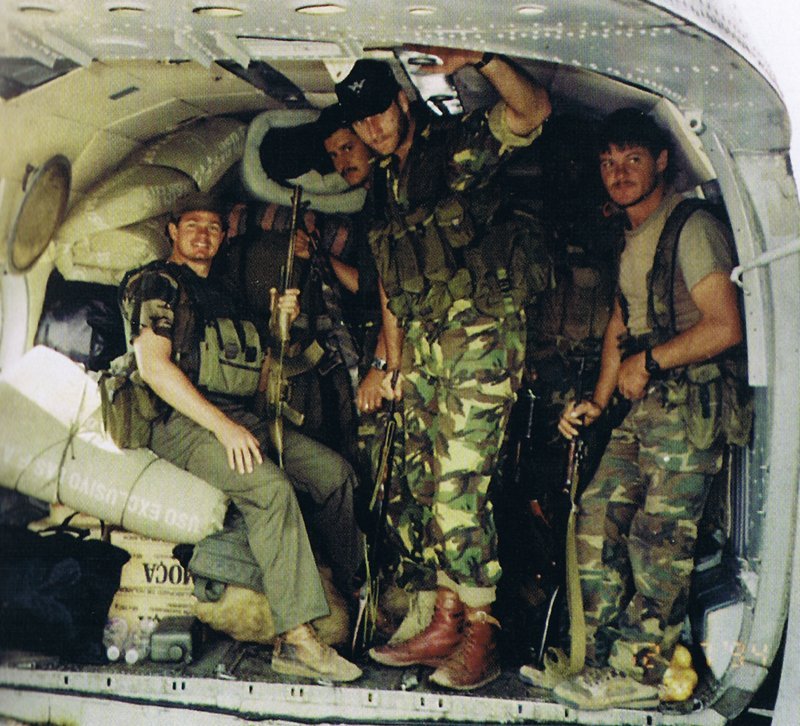 So all in all, I think I am satisfied with this purchase.
drmatz

pretty cool find and sweet photo... i can ready something in portuguese on the thing the guy with your rig is sitting... says "Excusive use of armed forces..." and the box underneath says "Moca" could be short for mozambique (in portuguese moçambique) or the word "Girl" - Moça...
so they are around either mozambique or angola...

Cool! Thanks for the info. So somewhere in Angola or were there are a lot of girls huh?
Bolty717

Can you explain how the mag retention straps work? are the velcroed? Cant tell from pic, cheers
Camonut314

Yes, the retention straps are secured on one end with velcro, the other is secured at the middle on one side, about where those black reinforcing stripe are.
Bolty717

Cheers so they can be tucked away when not needed.
Camonut314

Yes, i am assuming that is the reason the are still in tact, and not cut off! I think that if these were ever issued, there would be quite a few field modifications applied!
koalorka

I've seen a few of these and assumed to the be issued to bantu homeland forces; I think Bop. issue is most plausible.
mcoleman762

Your chest rig is part of a webbing system issued to Bophuthatswana Special Forces.  The set consisted of a Niemoller style belt and braces, and various packs and chest webbing that could be attached to it.  There was the R4 mag webbing such as here, as well as a rig for 40mm grenades.  There's a matching backpack too, and a rifle grenade pack as well.  Some of the rigs are designed as stand-alone items with their own shoulder straps, whereas others only have clips on them for attaching to the braces of the belt order.  I don't have access to my photos at the moment, otherwise I'd post the rest of the set.

This kit has got fairly rare over the last few years, but was somewhat common about fifteen years ago.  Most folks don't know what this stuff is, so the collector value is often depressed.  Considering how few sets were made, it should be worth more than what it often sells for.

That photo is of Executive Outcomes operators in Angola, and yes, that's your chest rig on the left.

That is more concrete information than I could have ever hoped for (I take your word as gospel). Thank you so much. After I found out it was Bop. I was already aware that the collecting value would not be that high, compared to say recce or 32bn items. However for me the value lies in identifying the rig and confirming that it was indeed utilized during a critical conflict in African history.
Cheers
Gaetan
Sponsored content