So I've got some Swiss tunics to show, and a few questions about some of them, here they are:

Ord.40 Vareuse, nicely used and repaired. (Don't mind the other stuff at the right, this simply arrived the same day). 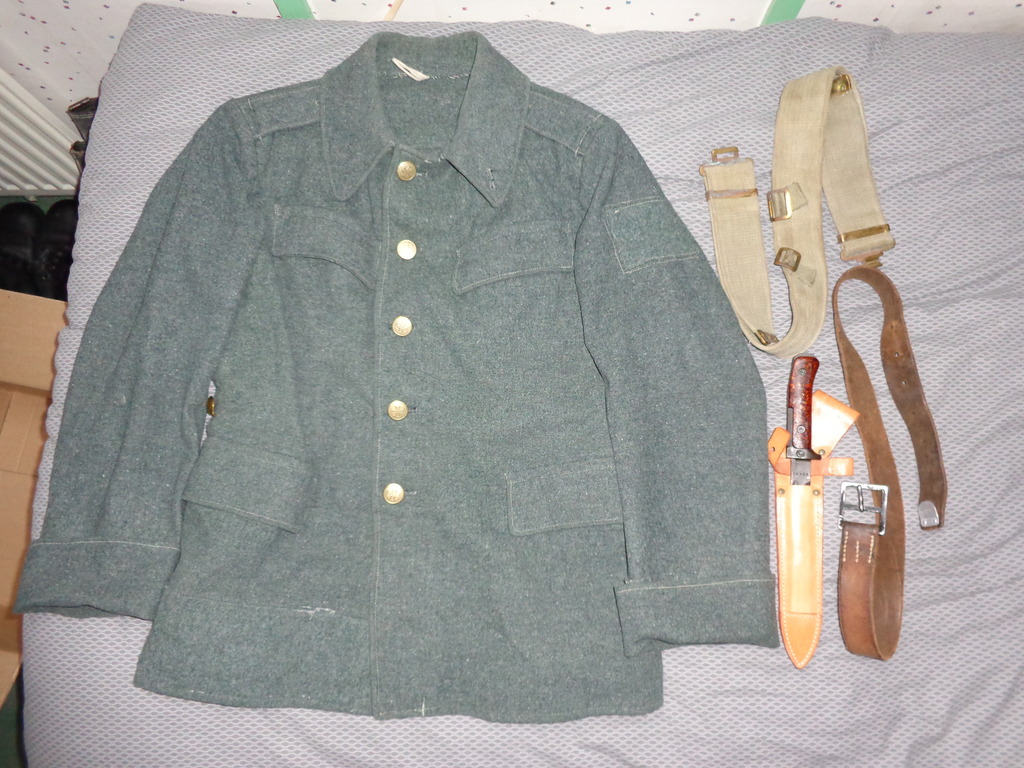 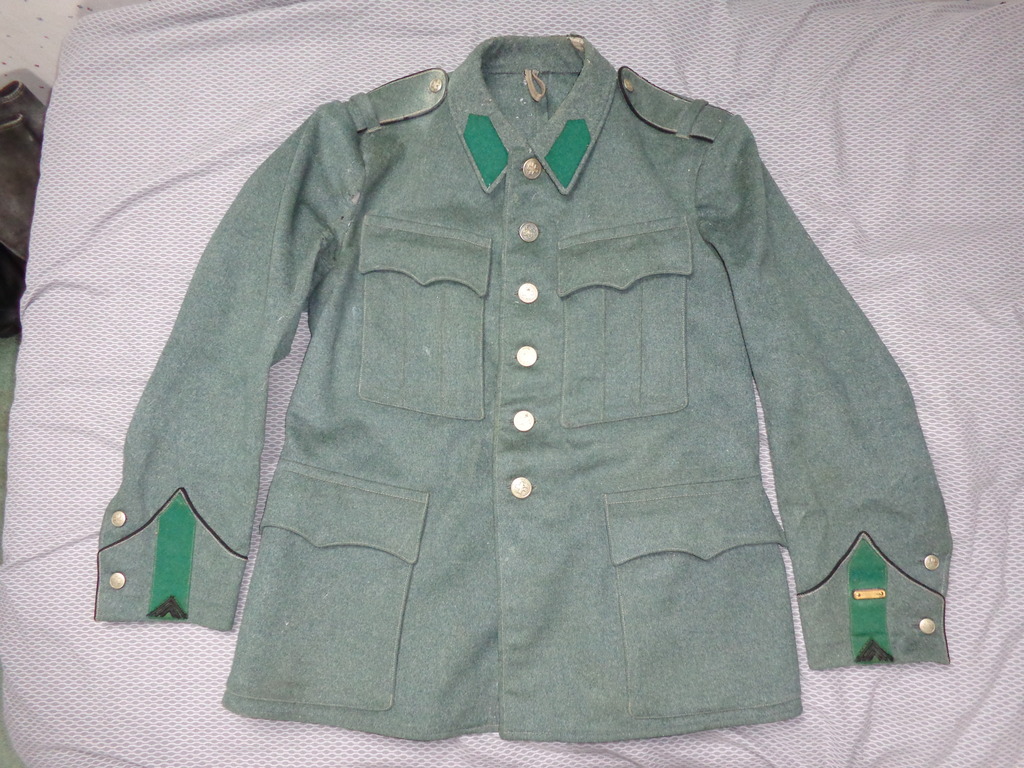 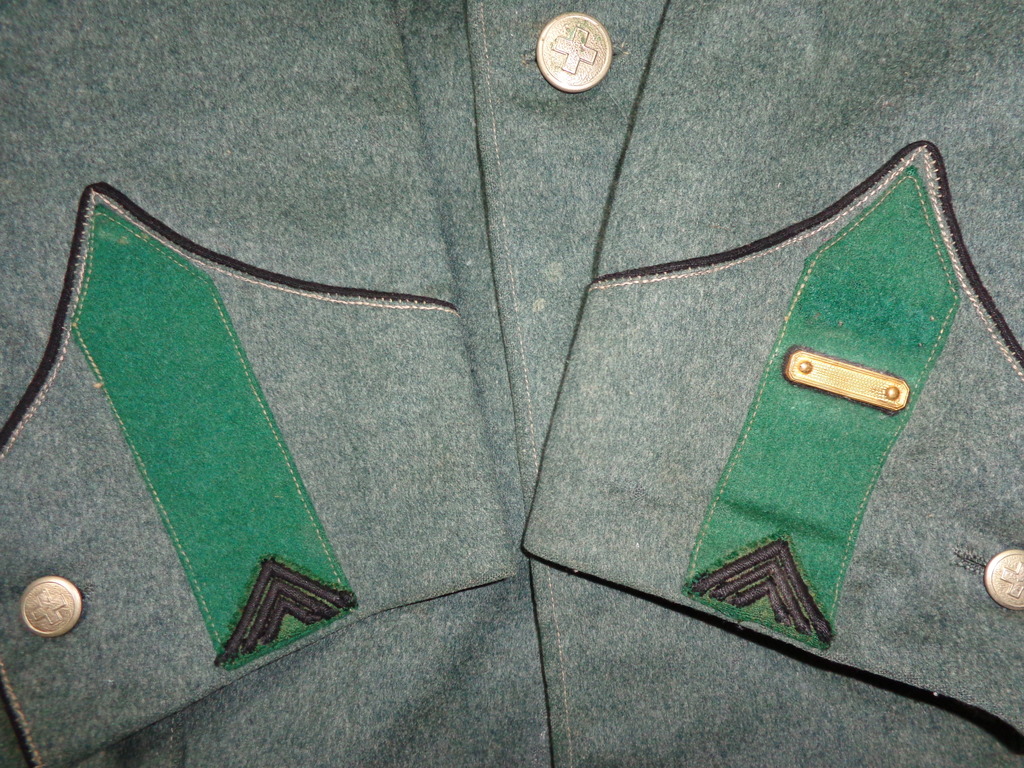 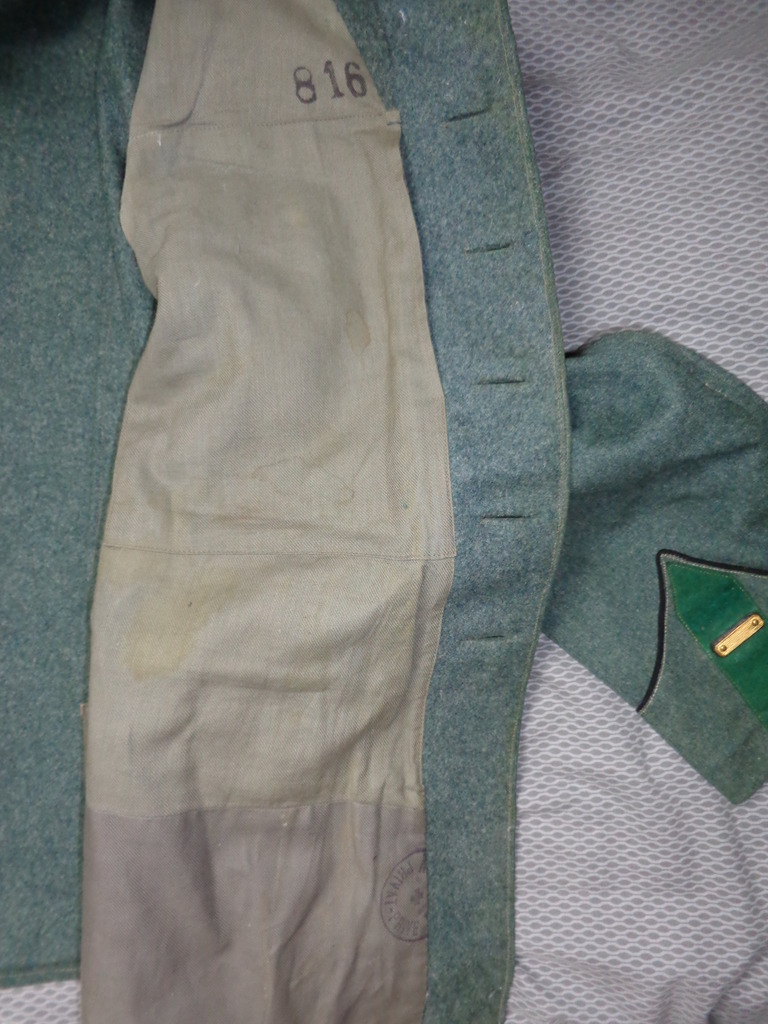 Ord.40 with post-1949 patch configuration, Luftschutz collartabs, ammunition officer armpatch, came with 2
same sets of unit shouldersleeves, 2 loose buttons, and some tag on the shoulder that was never filled in. 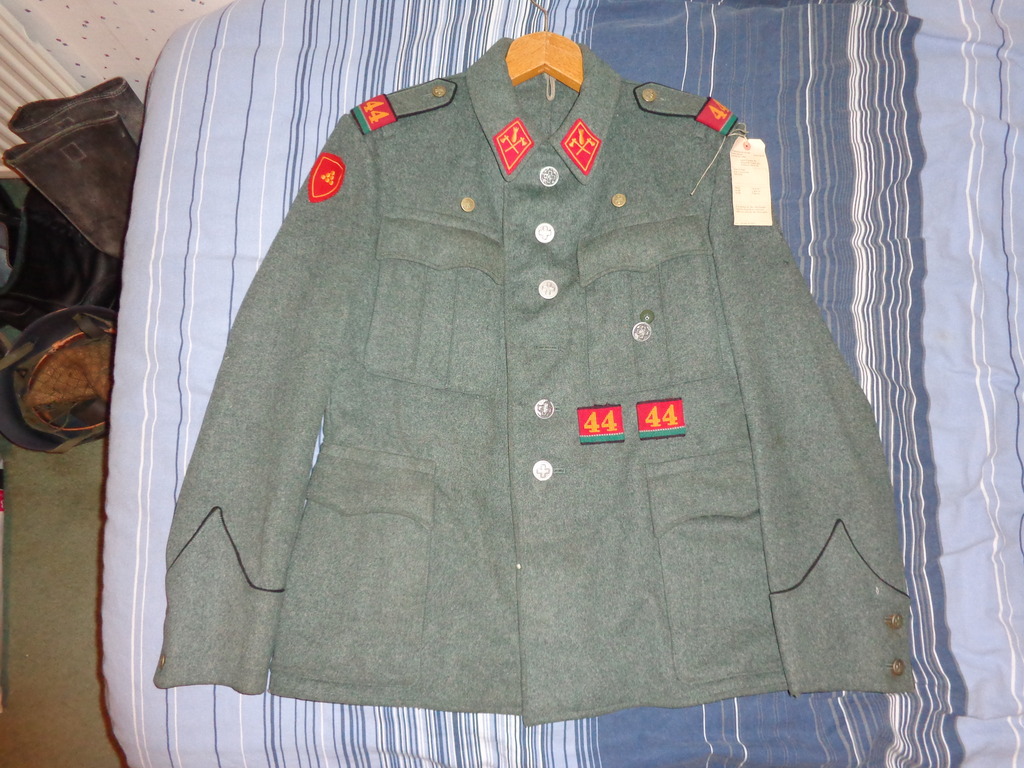 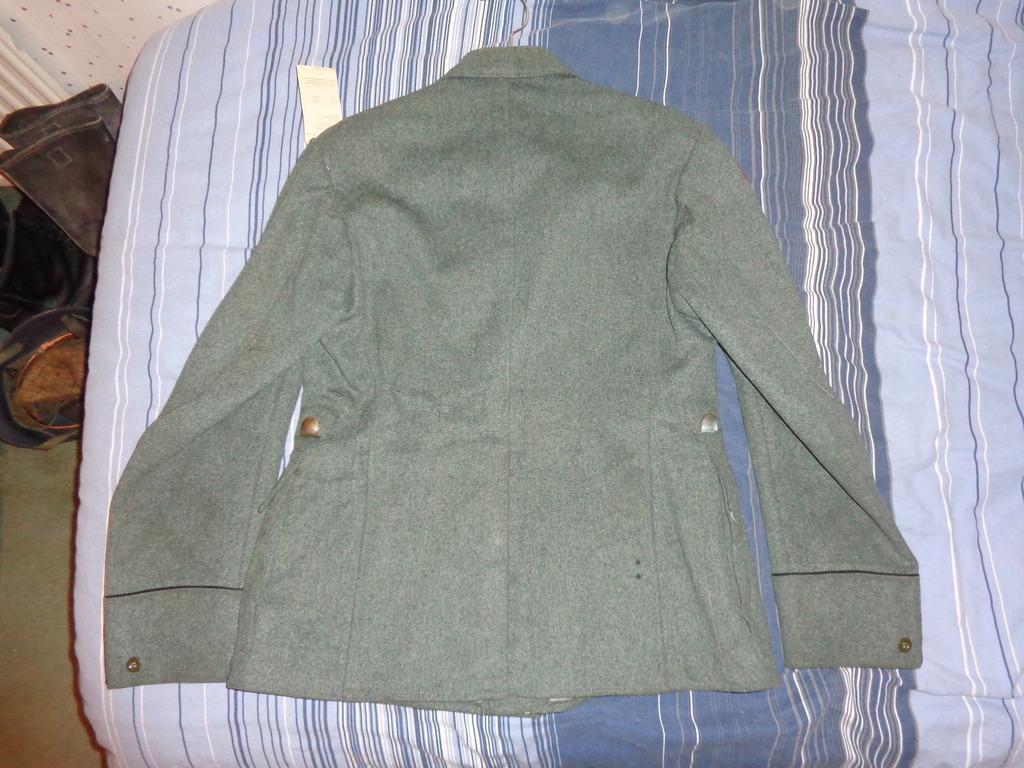 Ord.49 that was paired with Ord.40 pants in about the same size and year. Machinegun infantry collartabs. 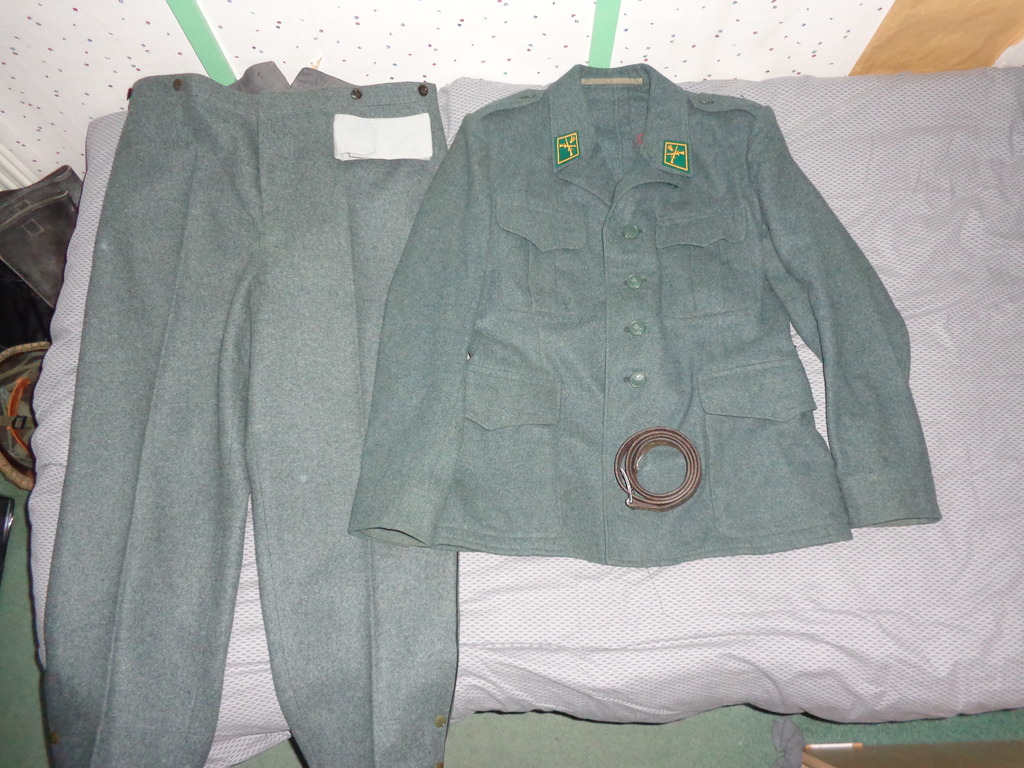 Some unit shouldersleeves, I've put the 47 pair on the Ord.40 tunic, as it seems earlier than the other ones. 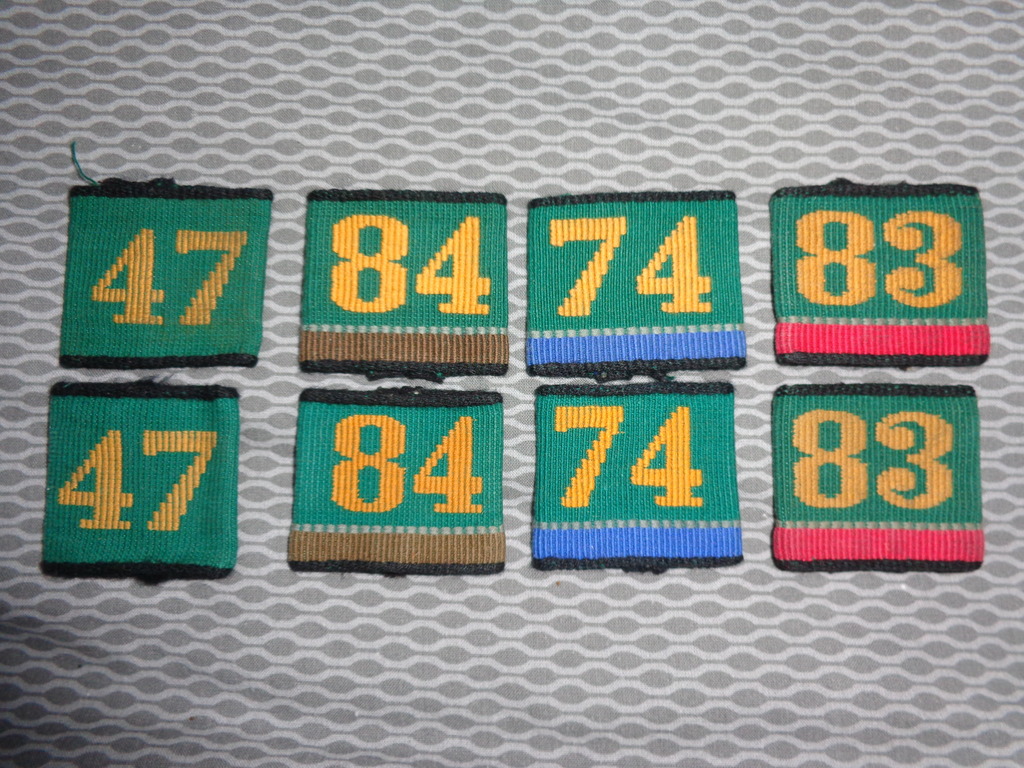 Were Ord.49 tunics actually ever fieldwear, or only for dress? I know the 1972 type with the silk liner were only
for dress, but these earlier ones don't seem to much different than actual combatwear.

There was some name for Ord.40 tunics with pointy shoulder-epaulets (as opposed to round) and the buttons to
keep the collar down, does anyone know what it was, and for who it was issued? (conscripted or contract soldiers
perhaps, or just officers?)
There's also 2 extra plastic buttons on the cuffs, my Ord.40 doesn't have them, anything special about those?

Again about the Luftschutz tunic, would this be for an AA unit, as it's an ammunition officer? Not sure if there are
other AA elements that deal with ammunition, maybe an EOD type unit.
michelwijnand 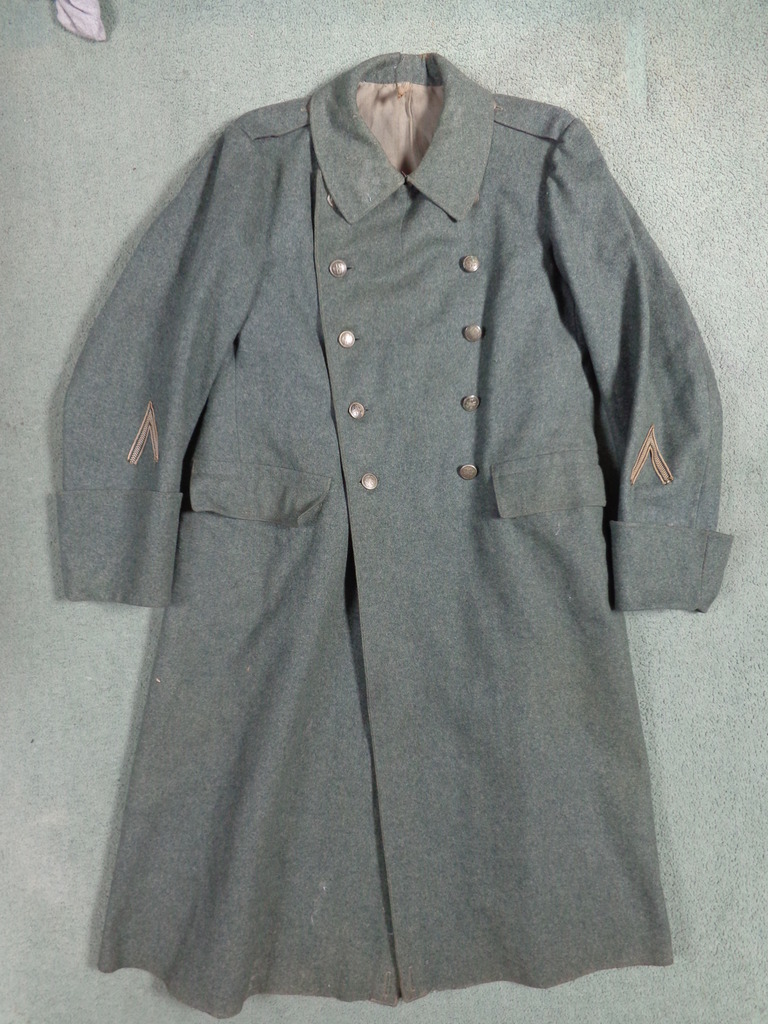 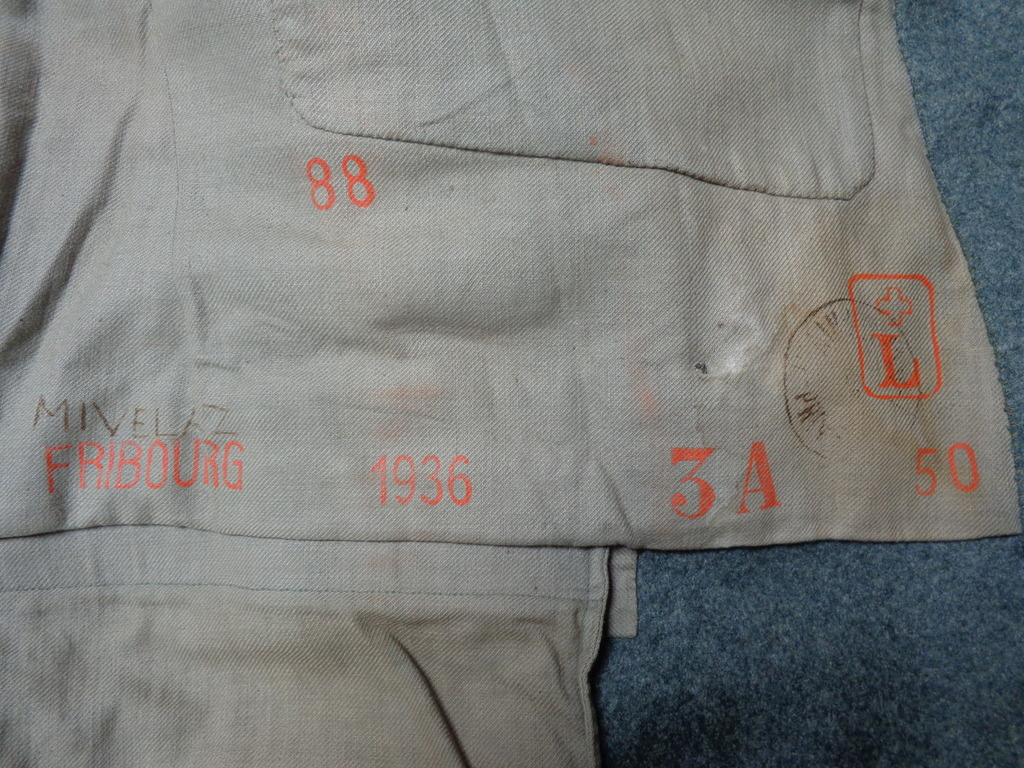 Reuploaded the photos from the first post because apparenmtly photobucket thought they weren't functioning badly enough. 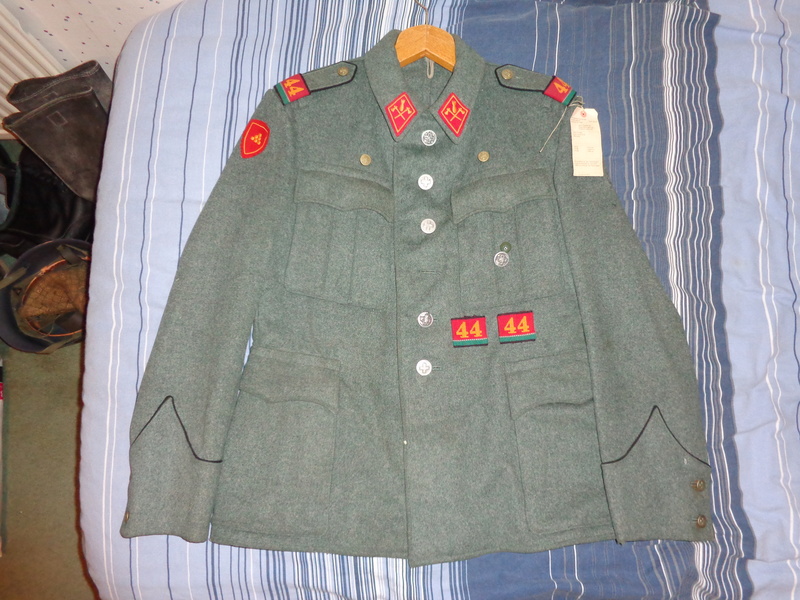 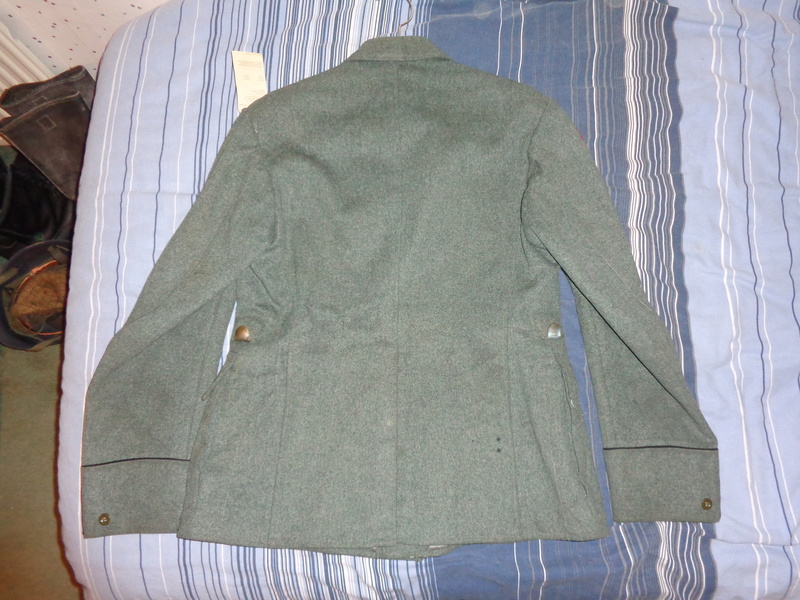 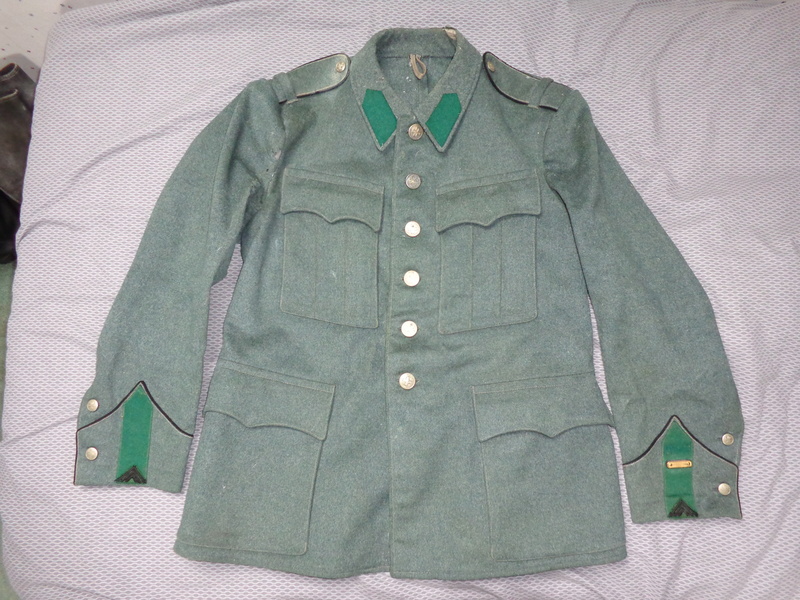 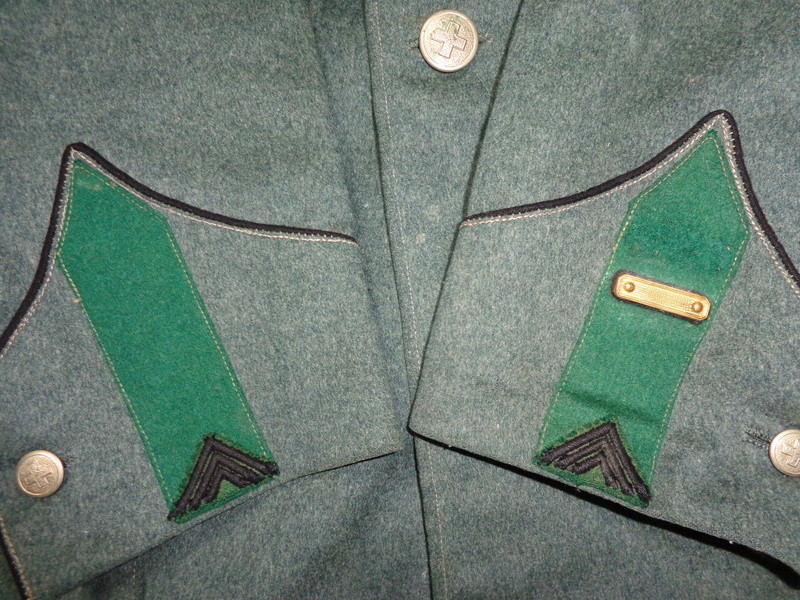 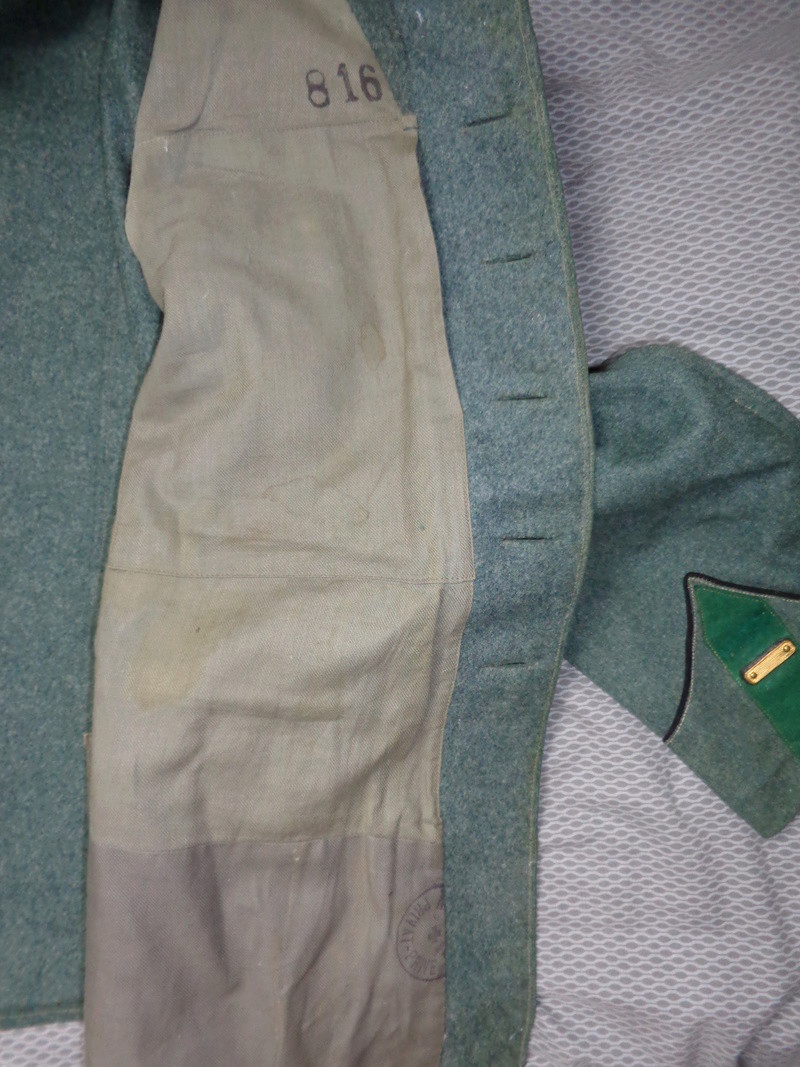 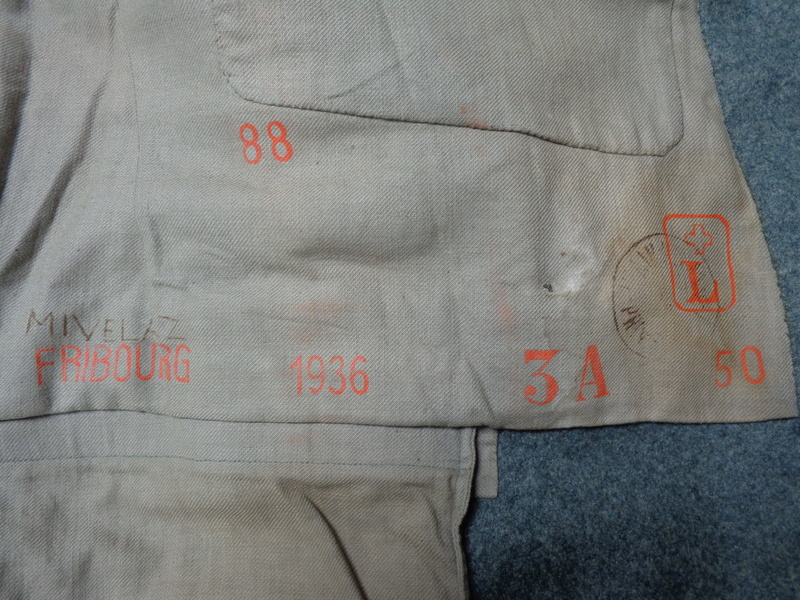 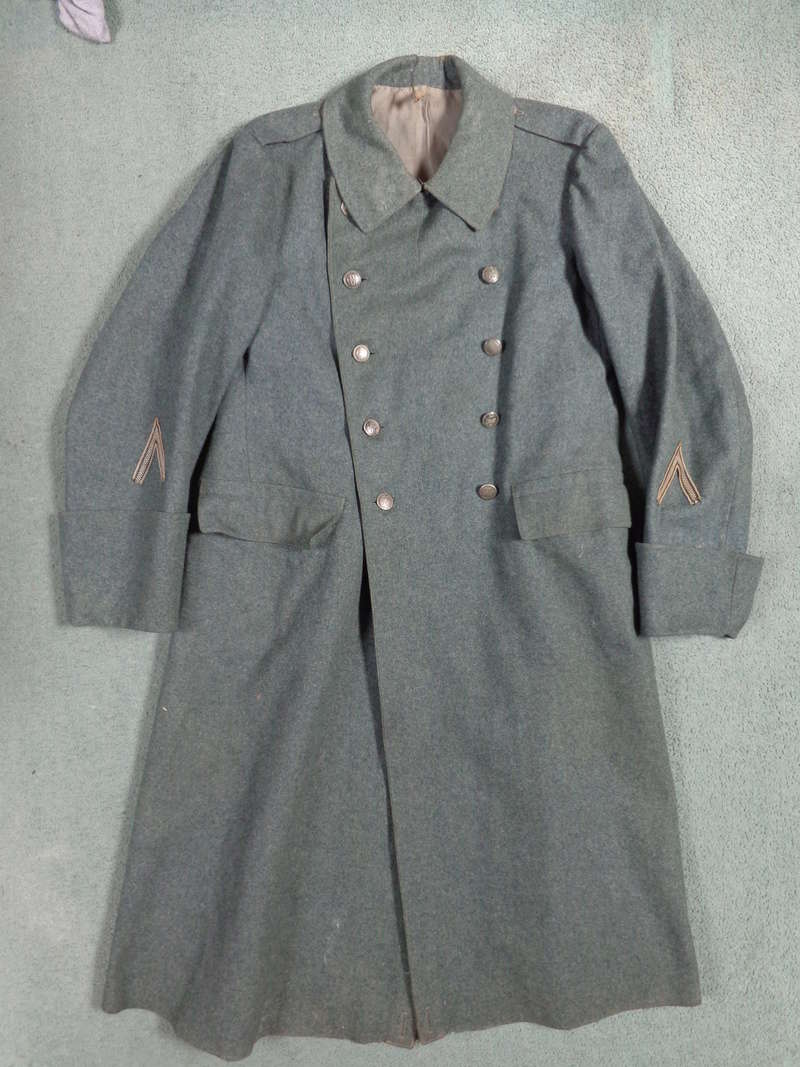 I am glad you bumped this thread as I missed the original! I have always found the old Swiss uniforms baffling. Maybe you can post some information about the models and variants?

I have a bunch of old Swiss wool items (jackets, trousers, and hats) that I need to get rid of. If you or anybody else has interest in this stuff, let me know.

Yeah I was told my photobucket linked images didn't show anymore, so I thought I'd just add all the photos that were gone. I know how irritating it can be when you finally find an interesting thread and all the photos are gone.

I don't know a whole lot about other variants, there's some like the Ord.26 an 26-40 (IIRC) that I wouldn't recognize straight away. I know the 2nd is an updated 26, but I don't know what the changes were.

And it seems that I listed the photos anew in the wrong order, and I forgot to add some, so I'll describe which is which and add the others.


The jacket with the red patches is the Ord.40 with post-1949 insignia. It's an officers variant which can be seen by the collar that can be buttoned down at the chest, the 2 sleeve buttons are both on the cuff, and possible the
pointy epaulets, but that can also be a repair or replacement job, as this is standard on actual Ord.49 jackets.

Then the one with the green insignia is a regular Ord.40, old shaped insignia (1940-1949), 1 button on and one button above the cuff, rounded epaulets.

And the greatcoat I think is an Ord.26, but maybe these were also updated or something, so could also be an Ord.26-40 or whatever.

And this is the Ord.40 Vareuse, which is a work jacket of sorts, also seen in training photos, apparently popular with machinegunners and others that carry more gear/weight than others,
as otherwise the regular tunic would wear out. 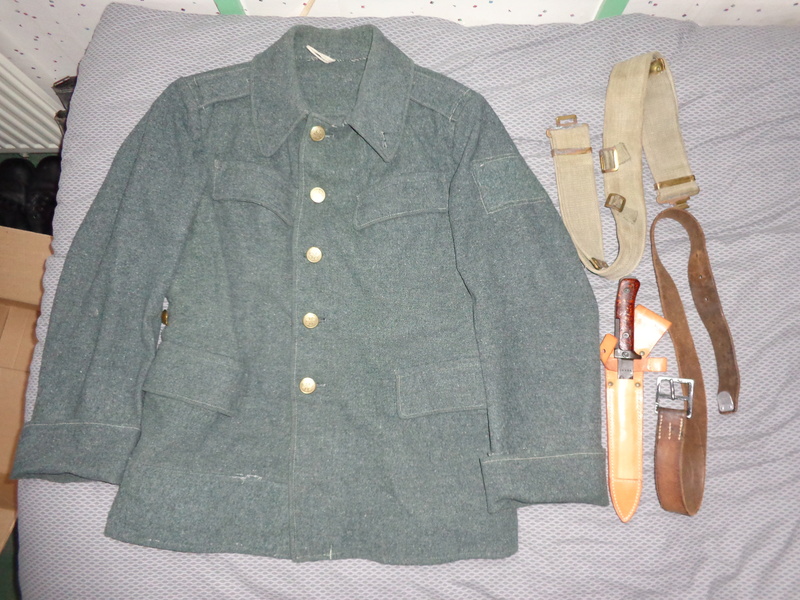 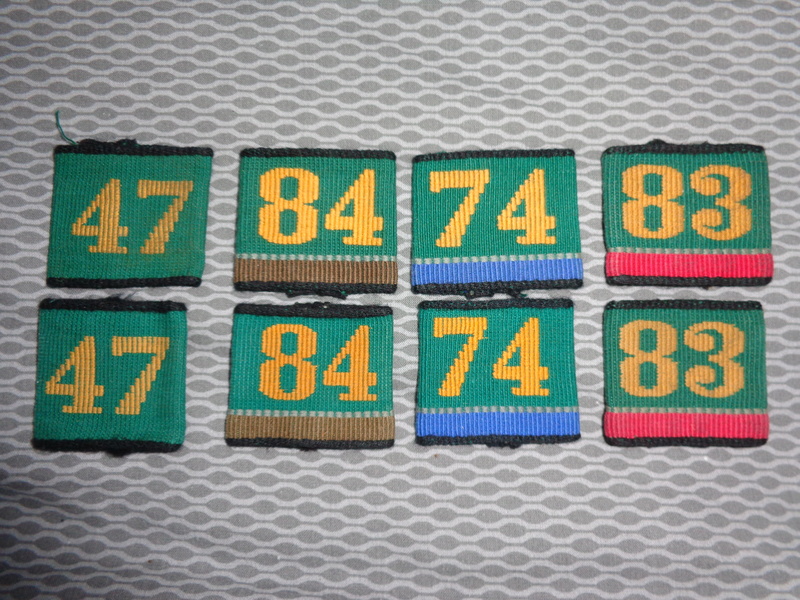 Ord.49 jacket with (huge!) Ord.40 pants. There are Ord.49 pants, but these just came together like this.
I'm still not sure what the old type 49 jackets were for, just dress or also field wear. I know the 70's type with different lining and buttons was just for dress, but never found info on the old type.

Thanks for the additional info! I'll comment later, but I'm still in shock from discovering the solution to all the broken Photobucket links is to spend $400 per year to have them reactivated! I agree with the critics... that is blackmail.

Now all our pictures across multiple sites are missing. So much historical documentation gone and never to be replaced except through painful new posts like what you're doing. Had I known 10+ years ago when I started using PhotoBucket that they'd do this I would have chosen another method to post images.

Corporate greed isn't so much the problem as corporate stupidity and greed combined. If they gave us some warning and offered a $40 per year solution, I would have done it. But $400? That's insane.

I'm already paying for photobucket as is, (though not the idiotic $400) as otherwise I'd have a way too small capacity there, but damn,
these guys keep screwing up more and more.
Every month or so I keep sending them emails asking them why they still haven't fixed someting as simple as the manual sorting function.
I now have 5 or 6 pages of loadout pics that are jumbled around and need to be sorted.
A while ago I though about moving to something other than photobucket, but I'd have to migrate 1000's of photos.


And I got a new Swiss greatcoat, dated 42, so a true Ord.40 coat, which has beltloops above the pockets, unlike my other one.
The pocketflap corners also are more rounded. 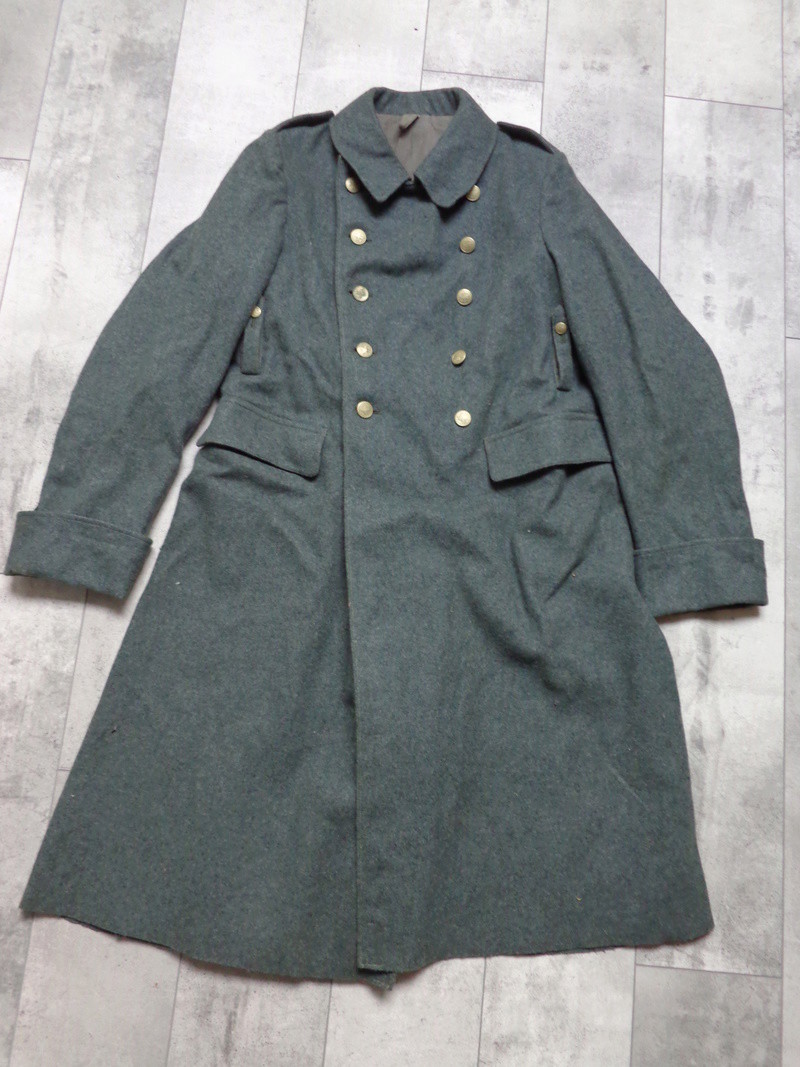 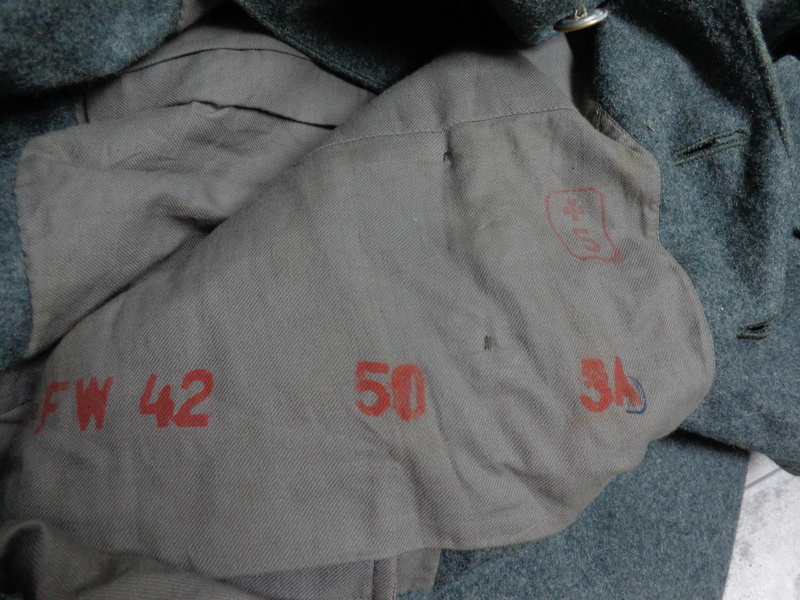