Jigsaw trousers 1967 No arm of service

Jigsaw trousers 1967 No arm of service

Latest acquisition,  Not marked with any arm of service.

Odd? features:-
Unlike all other Belgian Trousers I have the braces/ suspender buttons are on the outside.
The ankle tapes are sewn on externally and do not thread through any holes.
On the front reinforcing the Jigsaw pattern is oriented vertically,  this is the first timeI have seen the pattern used rotated on a pair of trousers.
They are enormous! sized as a 7.  Holding them against my body, just off my boots the top hem tucks just under my arm pits.  I am nearly 6 foot tall, these must be for  guy seven, or nearly eight feet tall"   Waistband is also enormous and would accomodate quite a portly gentleman.
Dated 1967. 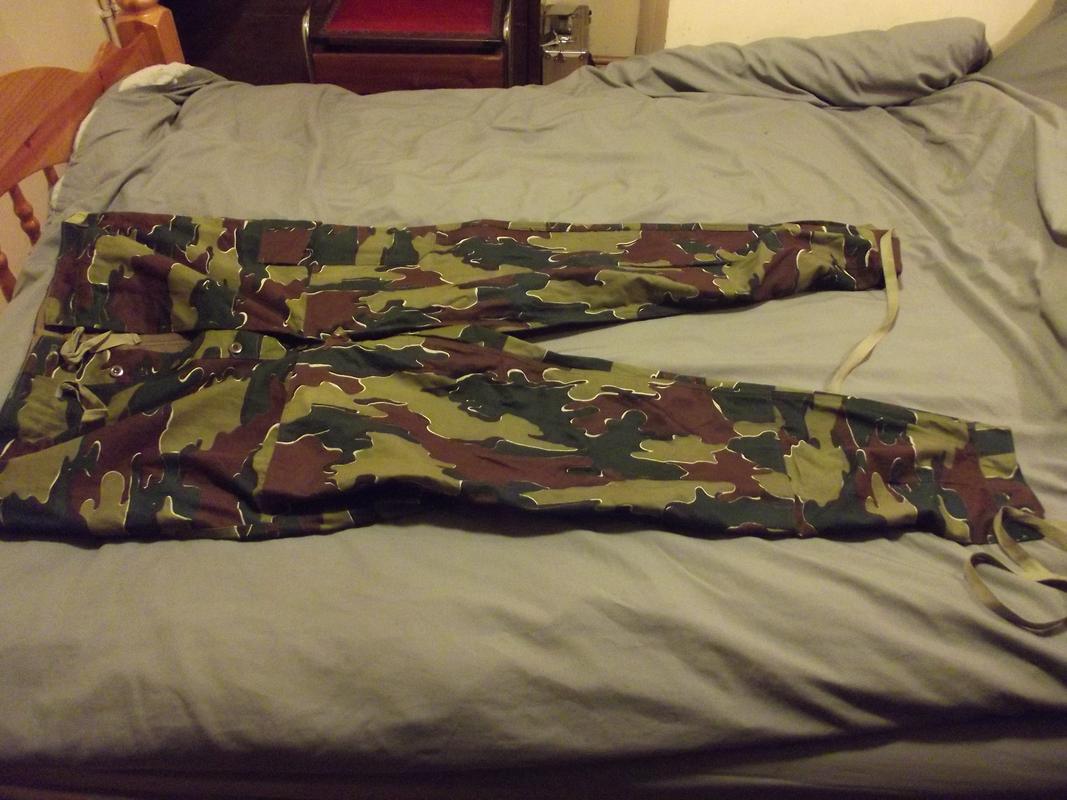 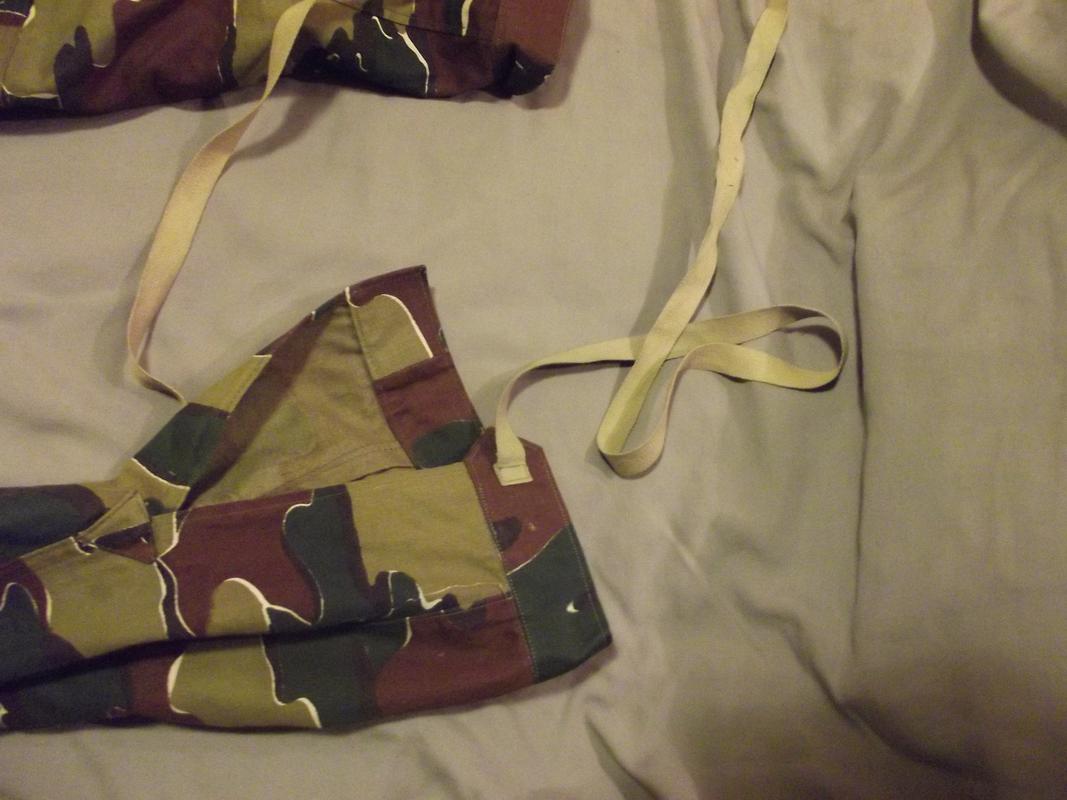 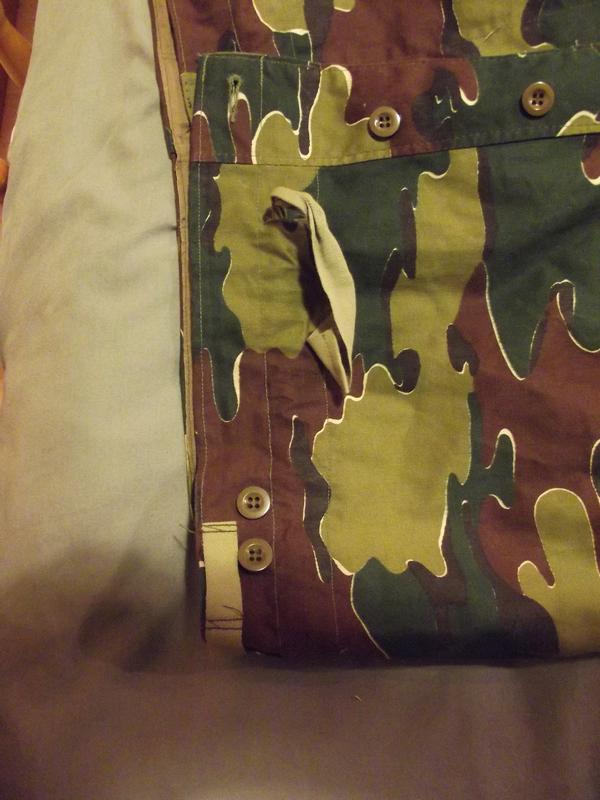 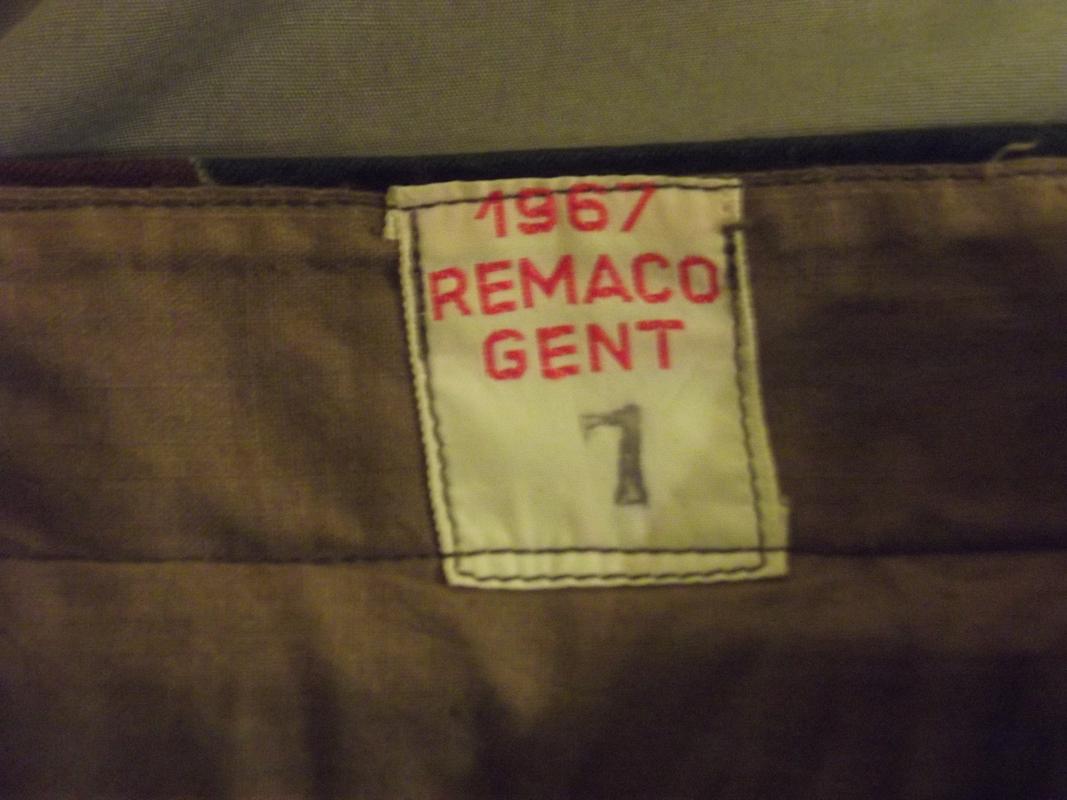 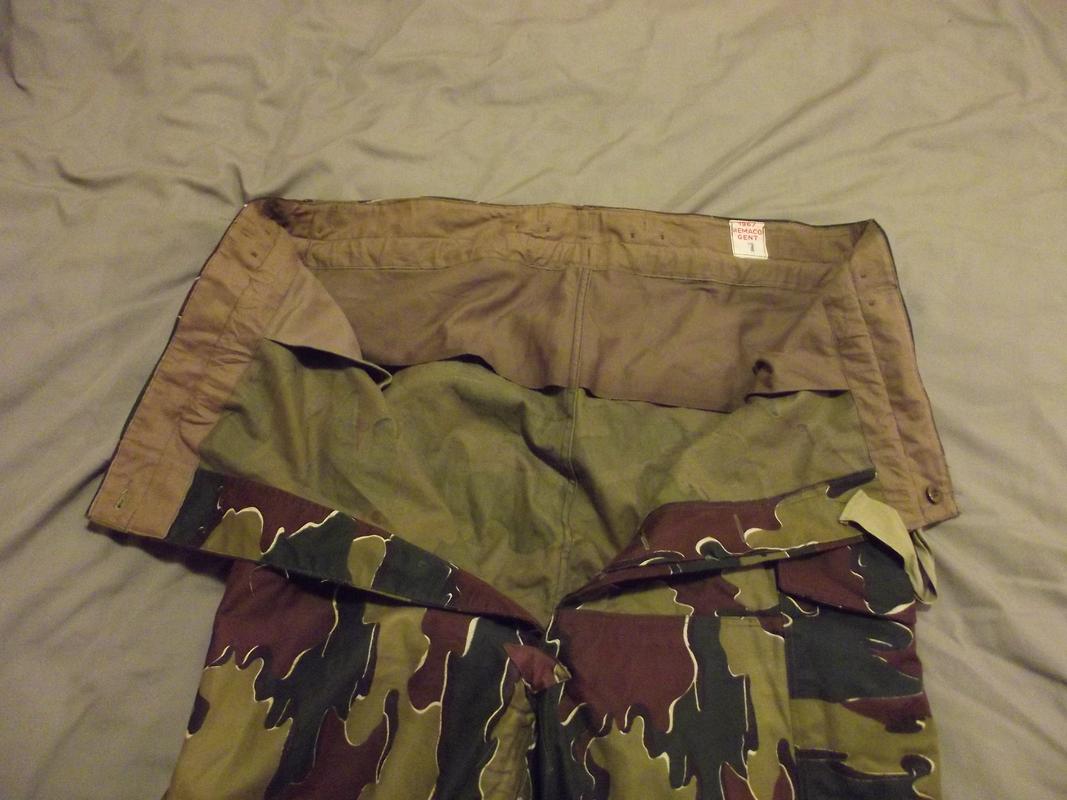 Wow! 1967 is the last date I know of that this type was produced. The other sample I have pictures of was made by Bergetex, so that's two companies that made this stuff in 1967.

All the features you mentioned are standard for the 1956 Brush/M&B style which was produced in Jigsaw for the first time in 1958. The orientation of the cloth, on the other hand, is definitely a unique feature. I don't know why the manufacturer would have done this other than by mistake. Given that it does not have military tags they probably could get away with that, but would be frowned upon even for unofficial use? One would think so

You might be surprised to know that Size 7 is not the largest the Belgians made. For sure there is at least a Size 8, which I think is the largest. Yes, you can put a decent sized child in each leg and still have room for them to squirm around! I know these uniforms were intended to be worn over the standard uniform of the day, but I can't imagine how big someone would have to be to wear even a Size 5, not to mention something bigger.

I guess Belgian chocolates and beer have some side effects

Here is a 1958-dated pair in size 7 (Begetex), which I came across a few years ago in a Belgian shop. As you can see, the waist band is wider than my size 38 chest, and I could probably fit both of my legs into one of the trouser legs. The fact that they turn up so often in NOS condition might suggest that few Belgian soldiers were large enough to wear them.

Regarding the vertical orientation of the pattern on Mike's trousers, I am not sure this would have phased the authorities very much. Consider all of the Belgian jackets and trousers that have been been repaired with mis-matched camouflaged cloth, with the patterns running every which way... 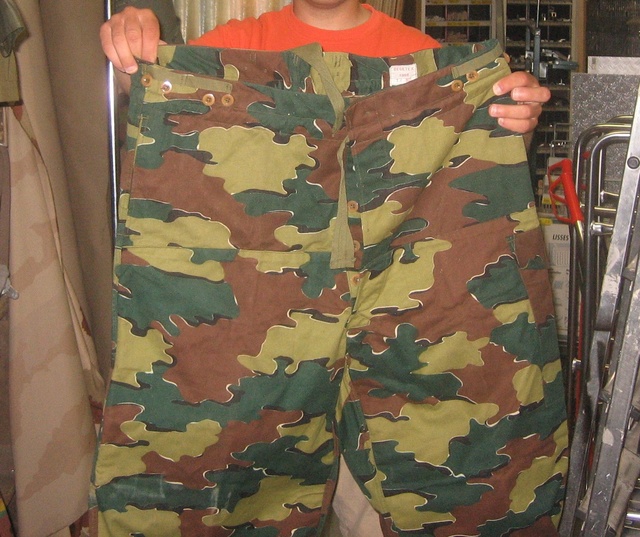 We should all be grateful to the Belgians for providing us with such a wide variety of odd uniforms. The variations of style, patterns and colours,readily available, all made in such high quality, has provided new collectors with the impetus to go out and find them and then to find other cammos.
Wolverine

fourtycoats wrote:We should all be grateful to the Belgians for providing us with such a wide variety of odd uniforms. The variations of style, patterns and colours,readily available, all made in such high quality, has provided new collectors with the impetus to go out and find them and then to find other cammos.

Indeed, I doubt we will ever account for all of the Belgian varieties.
CollectinSteve

fourtycoats wrote:We should all be grateful to the Belgians for providing us with such a wide variety of odd uniforms.

Speak for yourself! I'm trying to collect one of everything Belgian and it is maddening to know that as soon as I think I'm closing in on my goal there is something else I need to find! Bloody Hell

Seriously, my Belgian collection is one of the largest sub sections I have. And it seems that no matter how hard I try to keep it from growing it still grows.

Though if someone could find a 1948 "Waves" smock for me I think I might just call it "done" and happily move onto something else!