Recently struck lucky,bought a small job lot of militaria off Ebay,poor photos,description etc and one of the items was a Pasgt looking helmet. Put in a low bid,mainly for the other bits as was pretty sure that the helmet would be a crappy plastic,airsoft,Viper M88 type jobby.

Opened the box and was over the moon to say the least to find a Pasgt type helmet with a white Iraqi sticker to the rear.

The shell and inner cradle is in VG condition but it has a Dutch sweatband and some heath robinson chinstrap made up from what looks like some random British straps and Berghaus buckles(the lot was described as stuff used by a child playing soldiers) so is something obviously non original in any way,shape or form.

I have scoured the various helmet collecting forums known to me looking for photos of what the sweatband and chinstrap should look like but have come up with nothing so was hoping someone could please point me in the right direction. 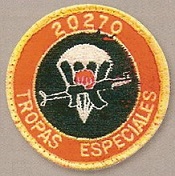