I would like to start a thread about the various canteens in use with the dutch army since the end of WW2. Although they are quite similar in design there is a certain development.

The basis lies in the american M1910 canteen, cup and cover. I believe these were used by the dutch army after the war for a while, as with much surplus equipment.

The first dutch design came with a aluminium bottle and steel cup in a cover very similar to the M1910 one. This design was changed a bit in the 1970s when the brass parts were chemically blackened.


Here is a 1963 bottle in a 1970s cover with blackened fittings. Note that the lift the dot fasteners are marked with ''knip hier'' (open here). 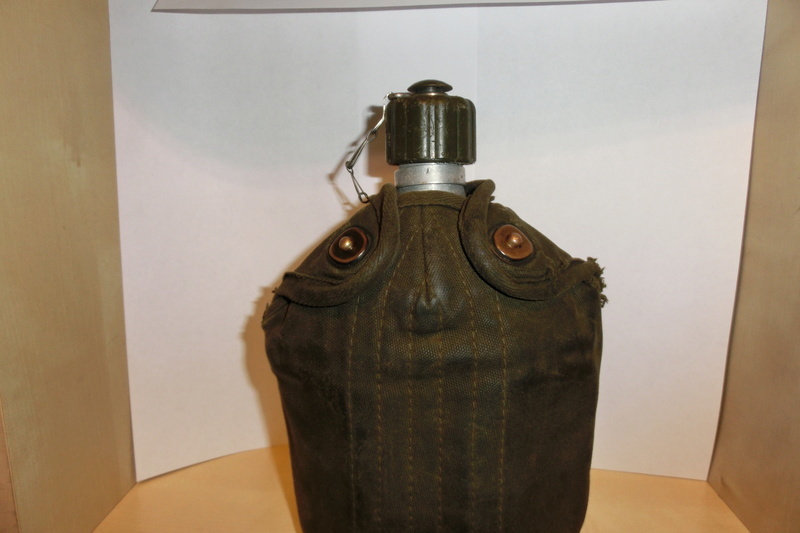 On the back is the M1910 wire hook, compatible with the M52 equipment. Also (somewhat) visible is a marking of D63, indicating it being made in 1963. 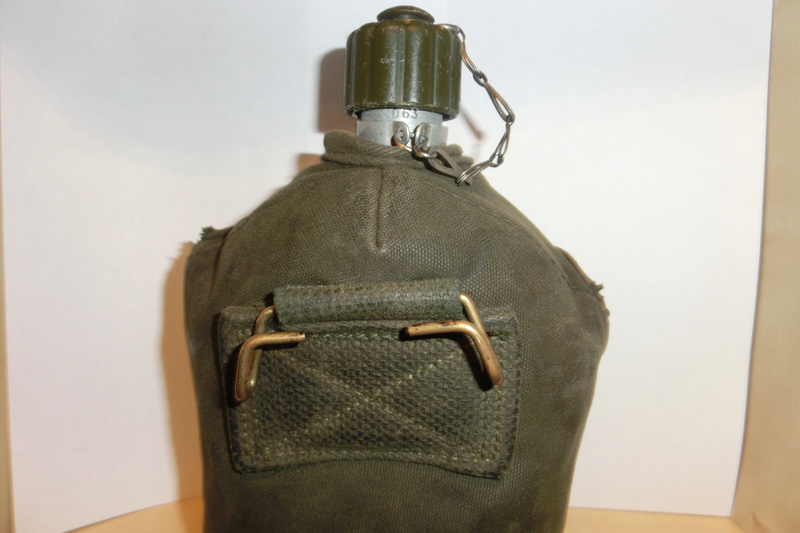 The cups have changed little over the years, all made of stainless steel and with folding ''butterfly'' handles. The only real change I've noticed is the rougher texture of the newer cups. 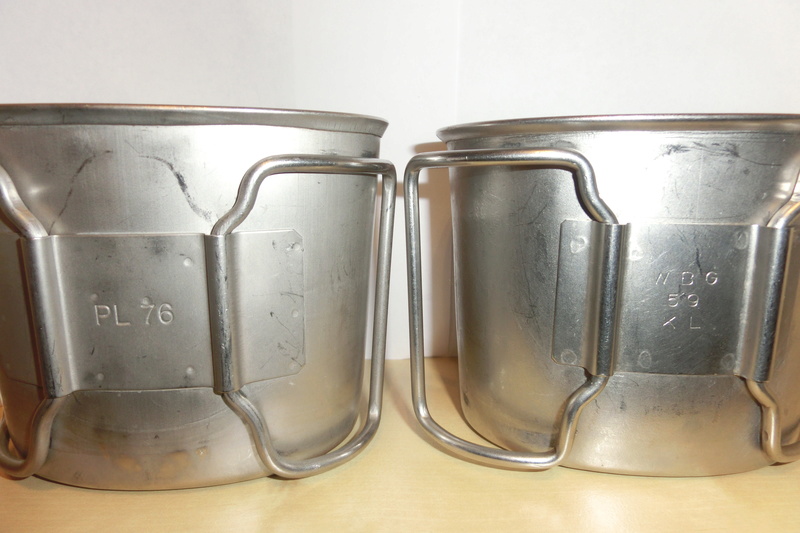 I'm in the mood so here comes another part: 80s and very early 90s.

The next iteration in canteen development came in the early/mid 80s. Like the small and large packs the covers were plasticized. I have a cover that was issued in the mid-80s.

This might be a somewhat experimental version but I'm not sure about that. I know this particular example was issued in the mid 1980s, it came with a 1986 bottle and 1959(!) cup.

The overall design is the same as the older models; felt lining (did I mention this?, blackened brass, and a taped outside edge (which has worn away at the tabs).

The biggest difference is that the canvas is now plasticized; a rough olive-green plastic covers (for what I know) a canvas inner layer. 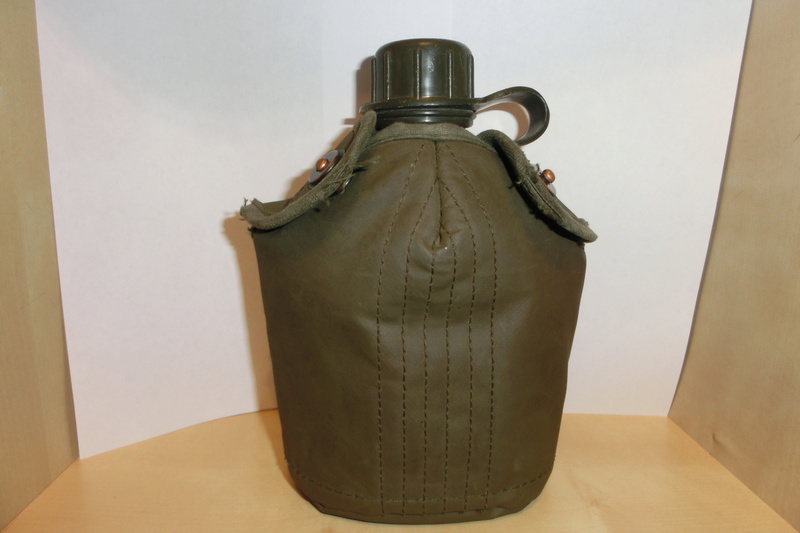 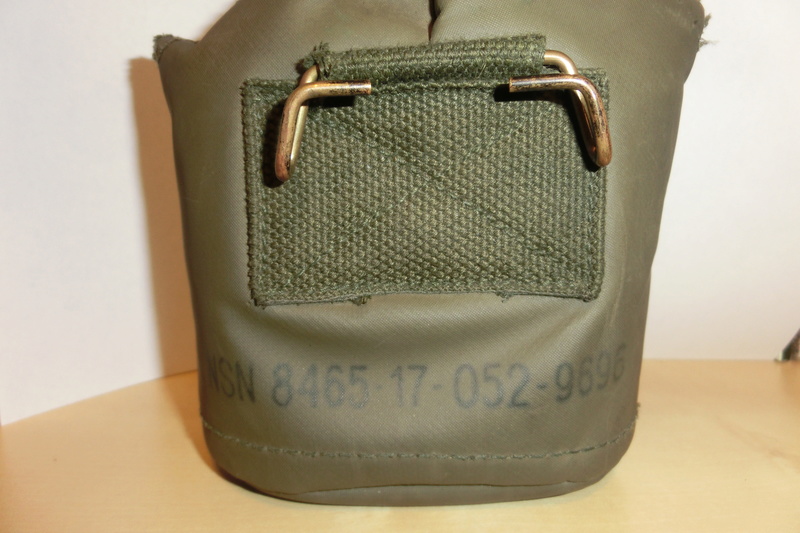 Somewhat later the full plasticized version of the late 80s until +-1992 comes around. This time it consist of two layers of some plastic (vinyl?/pvc?) with the insulation in between. The canteen is secured from now on with brass snap fasteners. 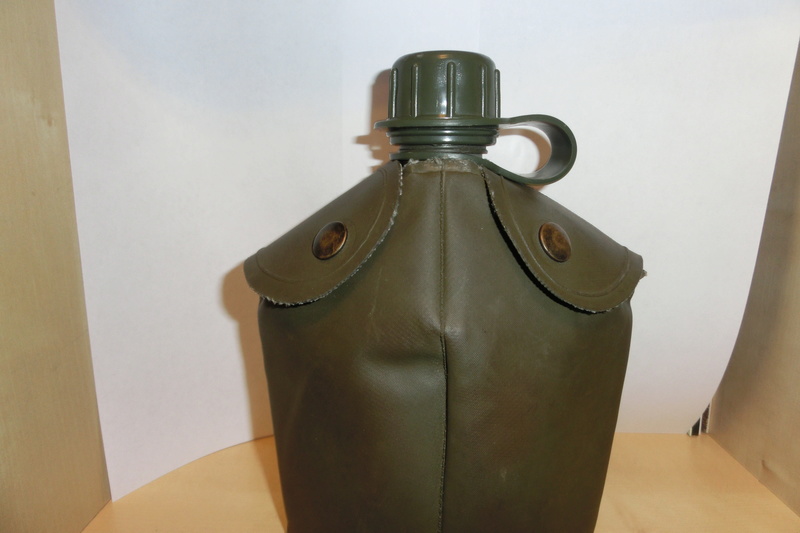 The back, again, is quite plain. The wire hook is attached with some molded plastic instead of sewn on. No NSN number seems to be present. 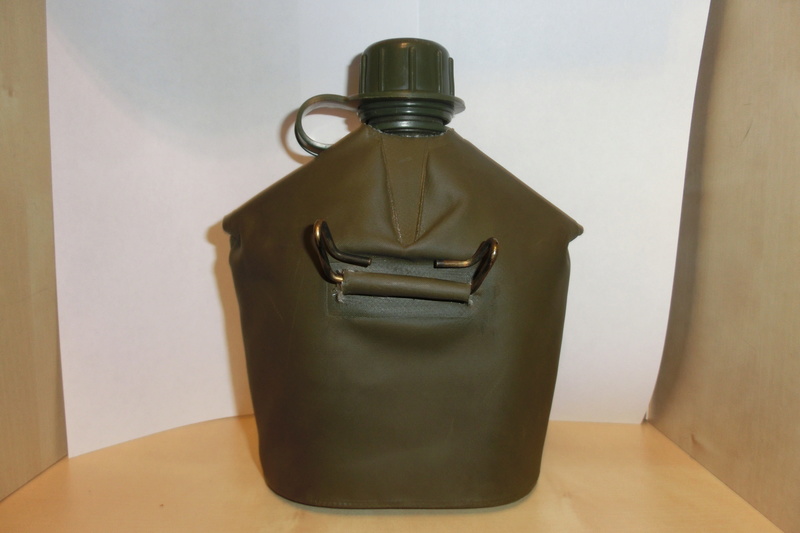 The inner flap has been marked with the NSN molded into it, the same number as the previous cover. 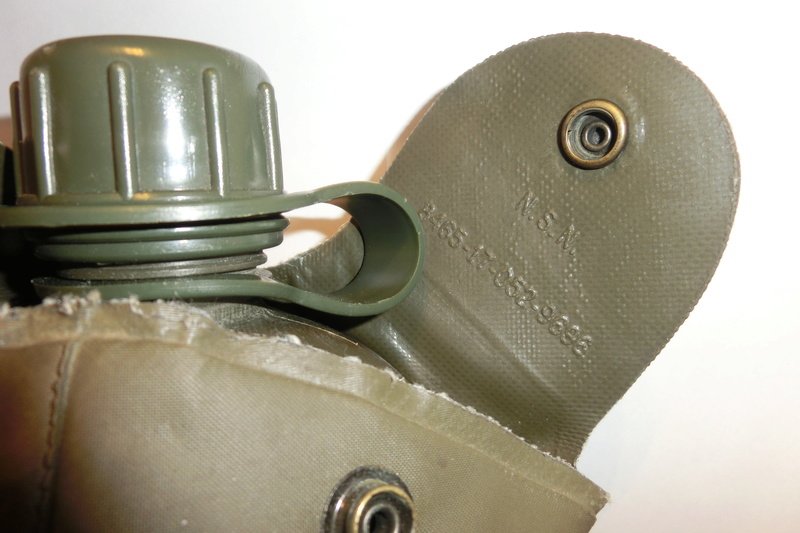 I haven't talked about the bottles much, they didn't change much since the 1970s, they only seem to be getting more green instead of the old brown ones. Perhaps I can do a side by side comparison of the bottles I own.

I will post the newer bottles (1992-today) if there is interest in them.
Wolverine

Nice selection so far. Regarding the very first type of canteen, marked D63, there was an earlier version of the cover from that time frame, with untreated brass fittings, and a somewhat lighter colour shade than the 1970s covers. The covers were also made in air force blue, as shown in various other threads.

We might also add to this list the woodland and desert DPM covers for the bokketuig?
Glencoe

Unfortunately I don't have an example of the earlier covers, if someone has one and wants to post it, feel free!

I will post the Woodland bokketuig Waterbottle and the OPS-vest waterbottle soon. I don't have an Desert DPM cover so I would be grateful if someone could add it to this thread.

I'm also interested to know if the Netherlands ever produced his own P37 style bottles and covers before M52 gear was introduced?
Wolverine

About the 37 pattern covers, the answer is yes, for the air force at least: 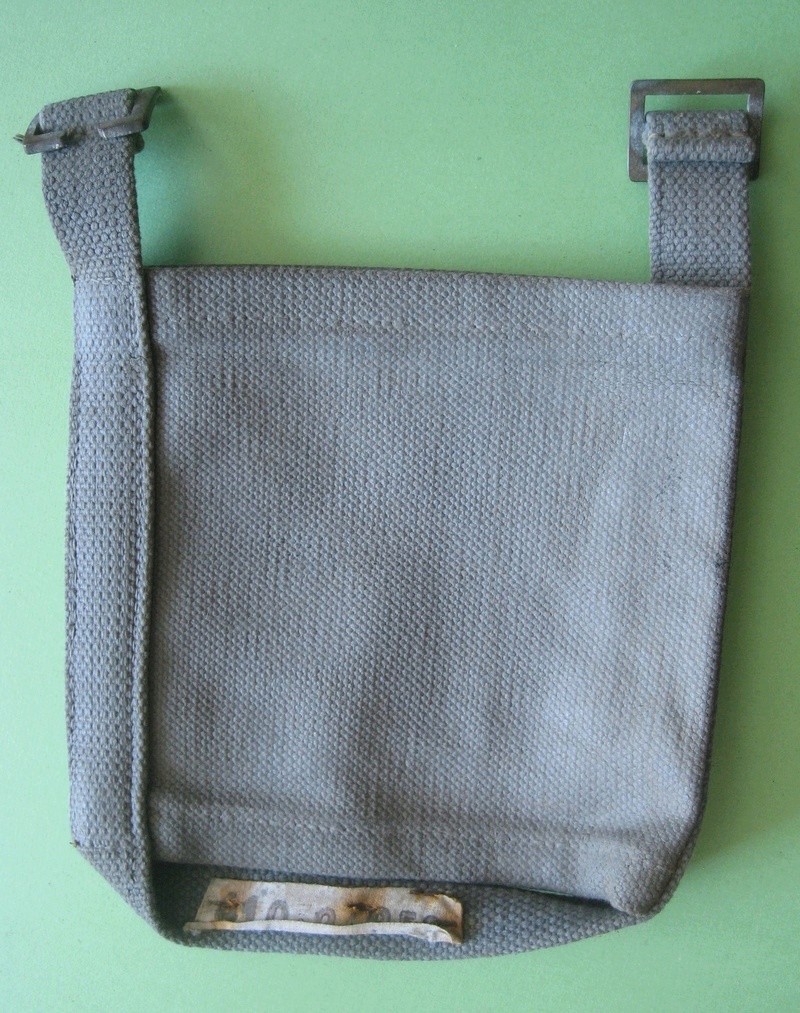 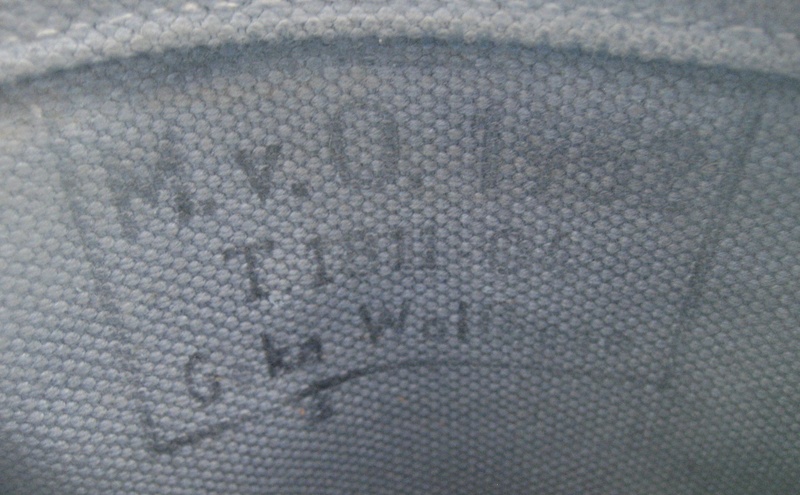 And a later air force carrier: 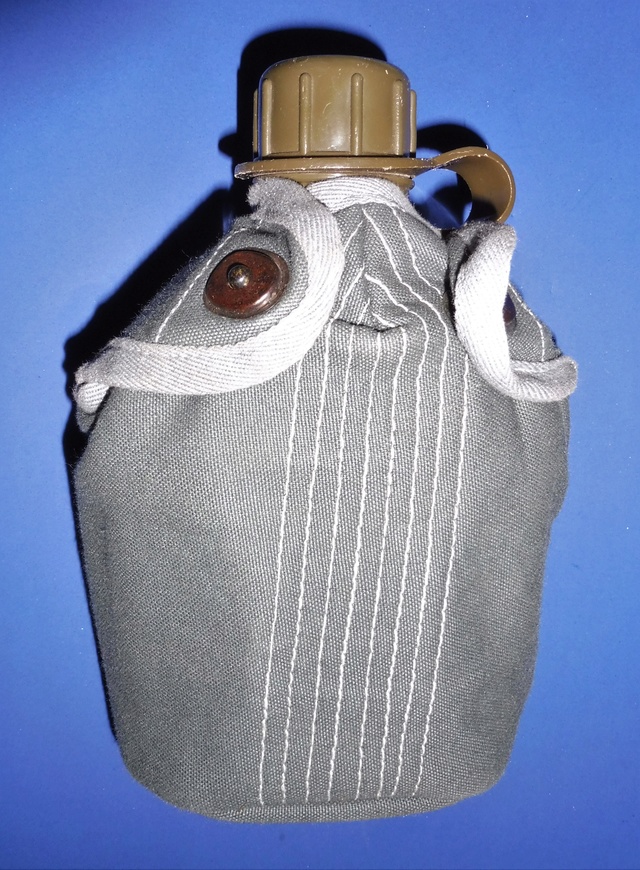 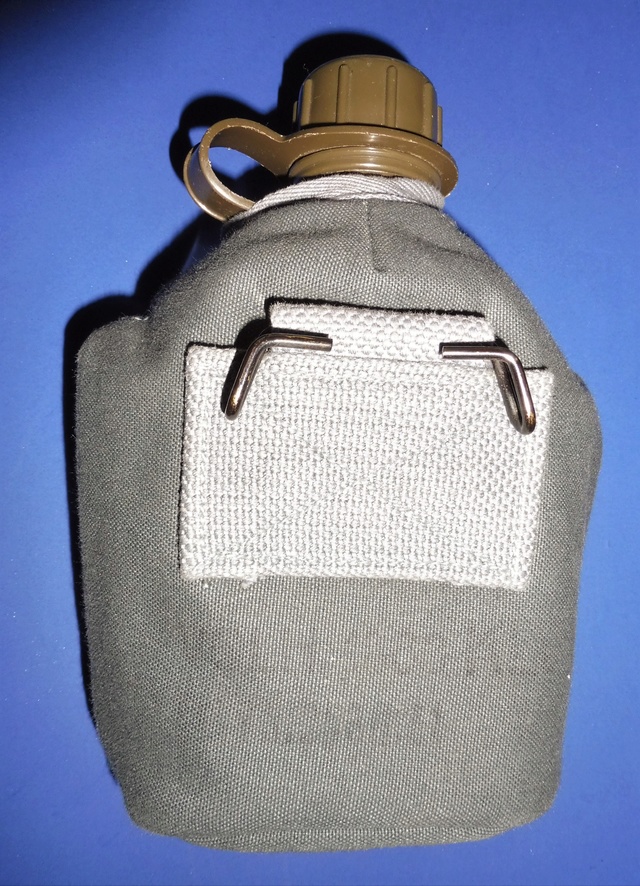 Here is one of the early M52 covers - I have a better example someplace that shows the original shade more faithfully: 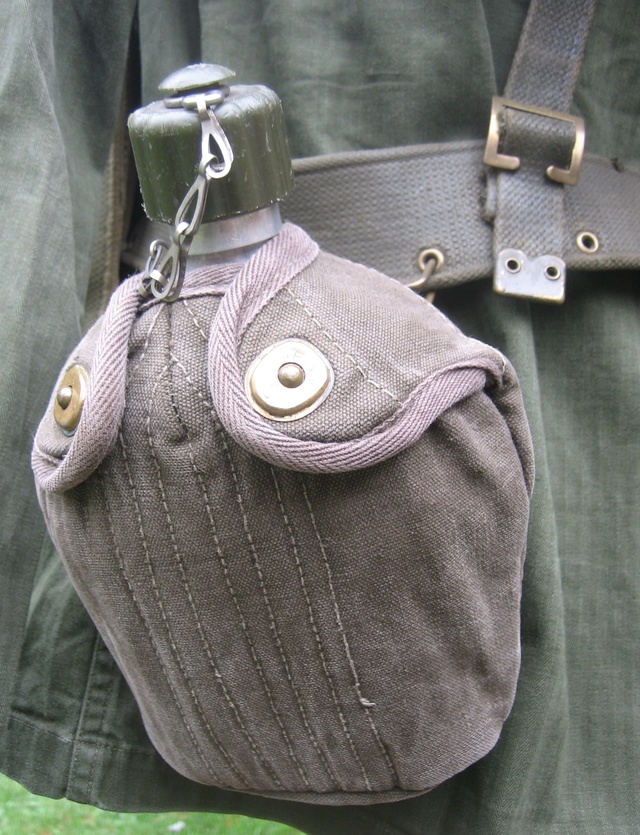 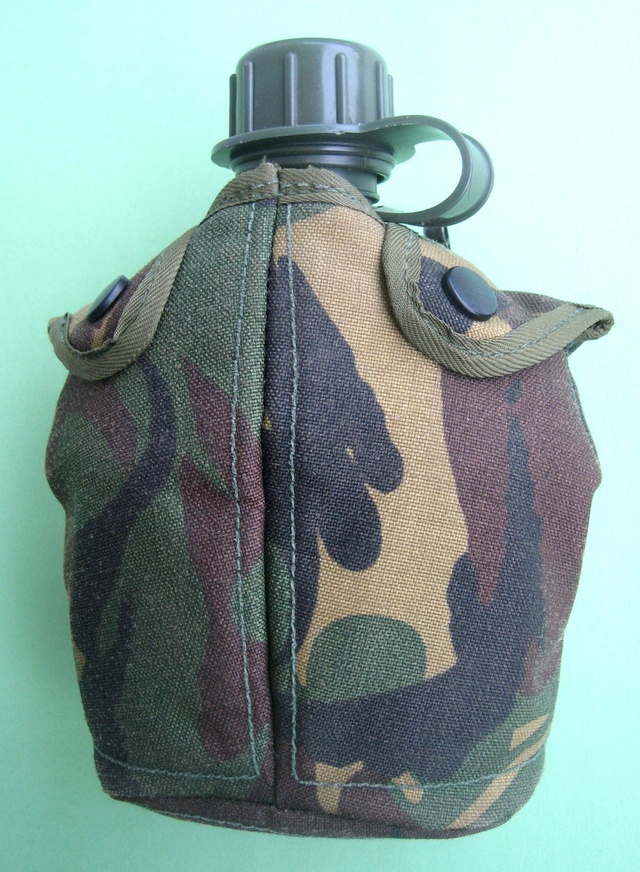 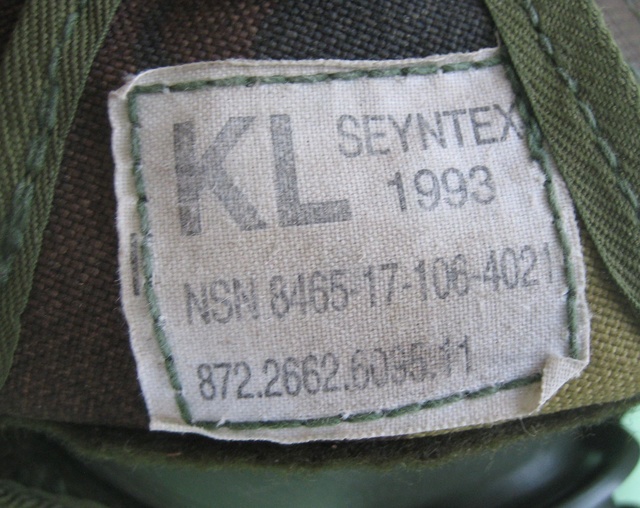 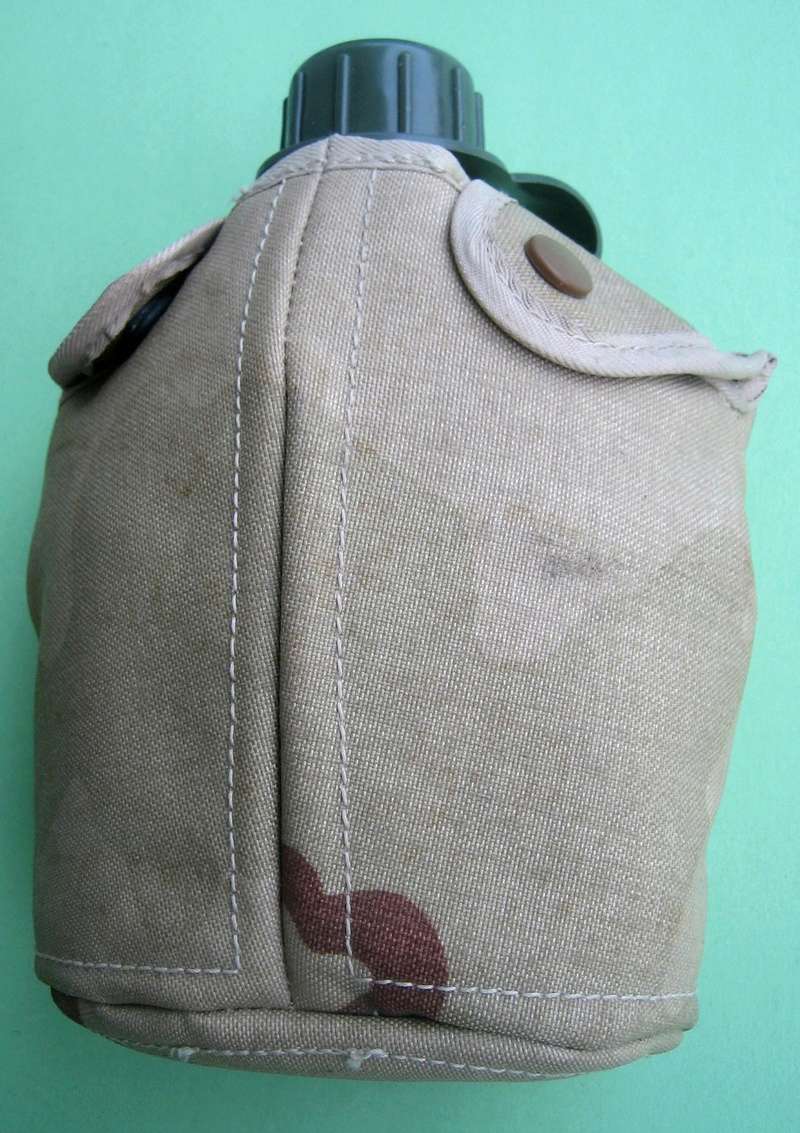 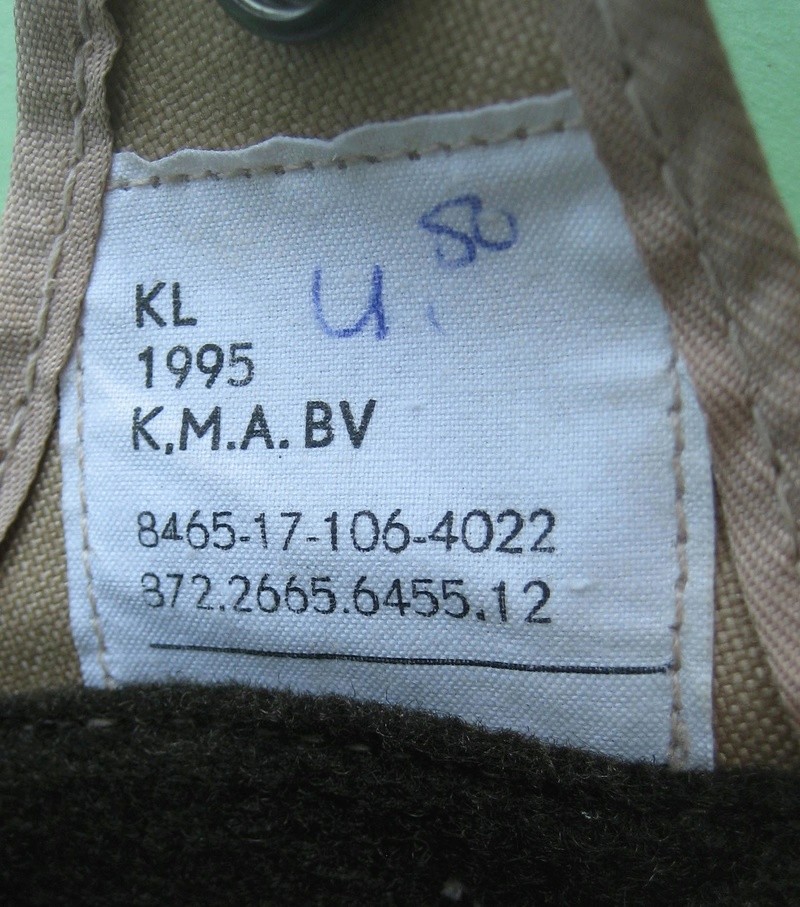 Nice stuff, thanks for adding it!

Note that the bokketuig pouches were the first with a grommet in the bottom of the pouches, this enabled (rain)water to seep out of the pouch.

In 2007 a new system was introduced in the dutch army. A system using MOLLE and a whole bunch of new pouches. As far as I know at least two canteen pouches were issued: one similar to the bokketuig pouch and a simpler box-shaped pouch. I only have an example of the latter that I can show.

The pouch is made of coated Polyurethane in dutch woodland dpm. The front is secured with an fastex buckle. The height of the pouch is adjustable, on its smallest setting an standard 750ml canteen and cup fit quite well. 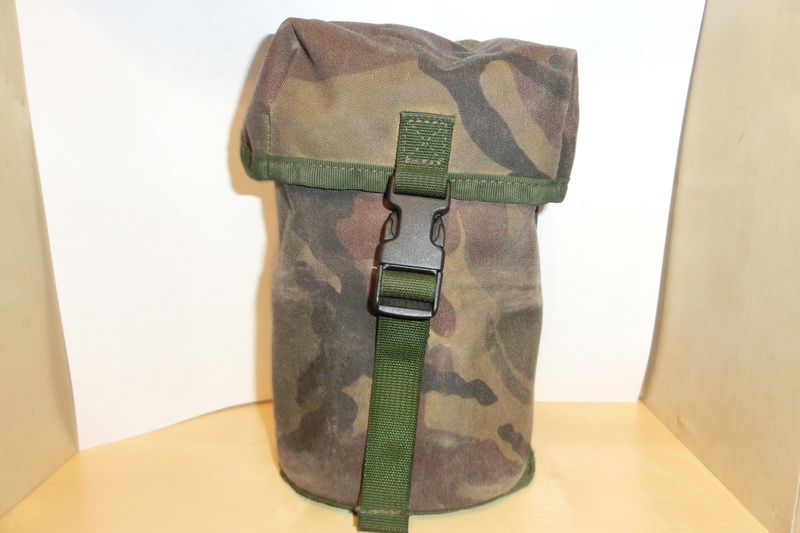 The back is fitted with the standard MOLLE attachement in DPM. 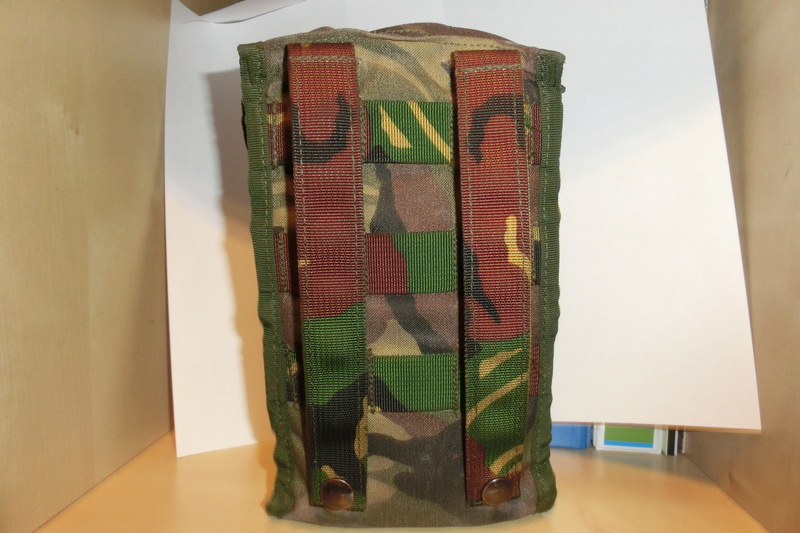 A label inside the top of the cover indicates that the pouch was really intended for the canteen, it reads:

Followed by a lot of washing instructions which I won't translate all. 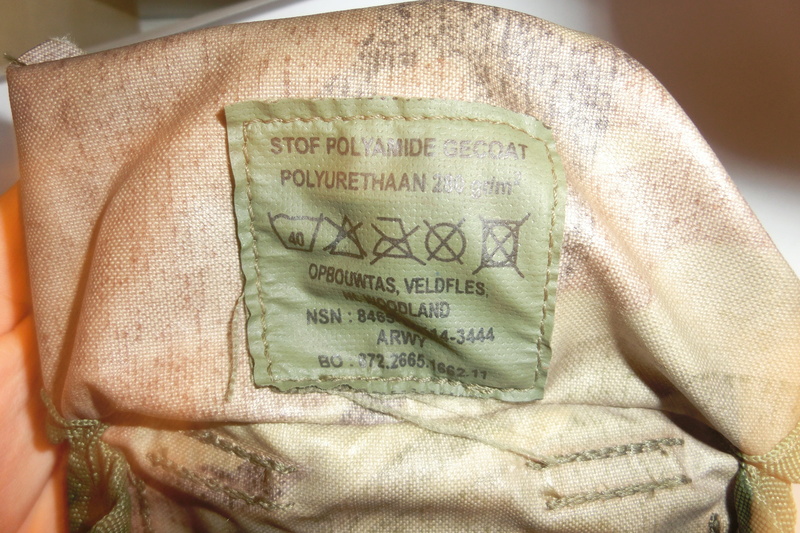 The black 1L canteen which I talked about in another thread fits remarkably well into the pouch. I wonder if that is a coincidence or not.

I will add this canteen to this thread just to make it more complete.
This canteen was Introduced in 1996 alongside the FM 12 Gasmask.

It was intended as a way for soldiers to drink in a contaminated area. A 'straw' located in the mask connects with a valve on top of the canteen cap. While holding the canteen upside-down a soldier can drink without having to take of his mask.

The canteen has been disbanded as the coating on the inside could get loose. The cap was thereafter placed on the regular green canteen.

The lettering on the bottle is:


After that comes the nsn number (which is unusual on  a water bottle).


The manufacturers logo comes last, the maker is AVON a company located in the UK. It is the same manufacturer as the gasmask. 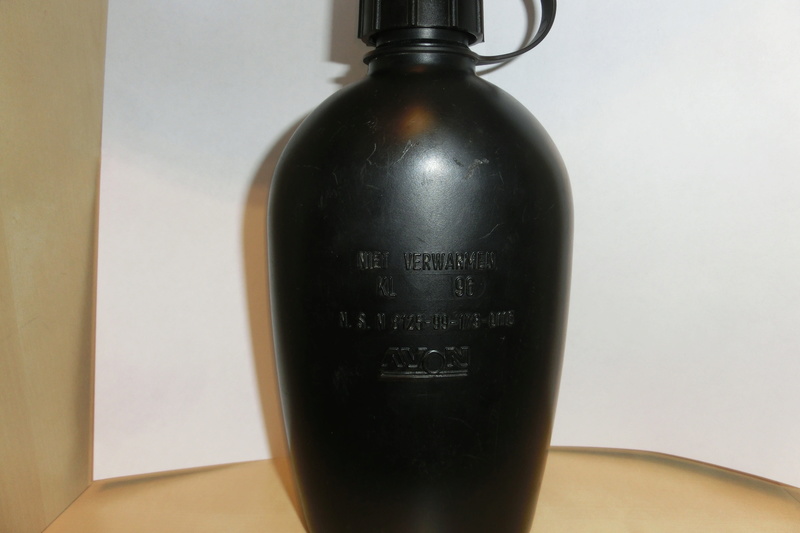 Adding some KM canteen pouch info to this nice thread!

The nylon one is early 90's, basically a nylon version of th enormal KL cut pouch, but with snap buttons. 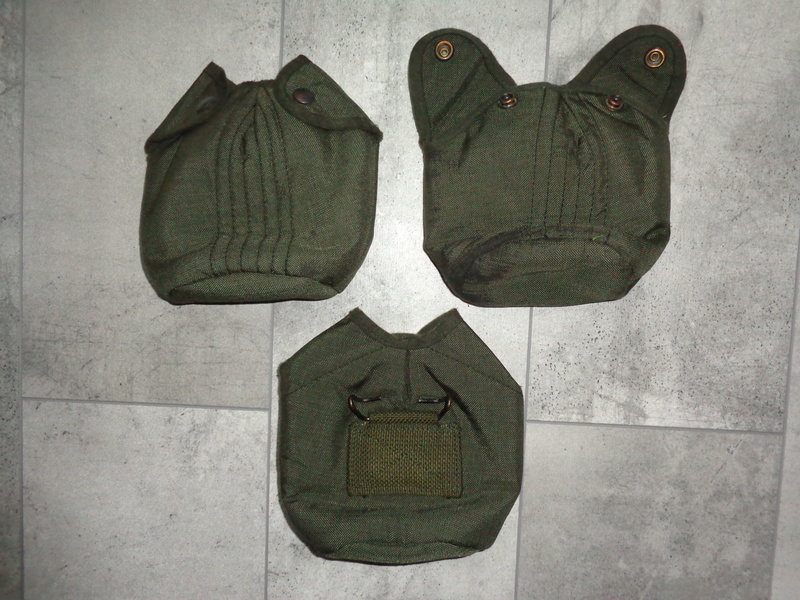 Then what looks like an earlier type of the nylon one, entirely like the KL ones but wit snap hooks instead of LTD's. 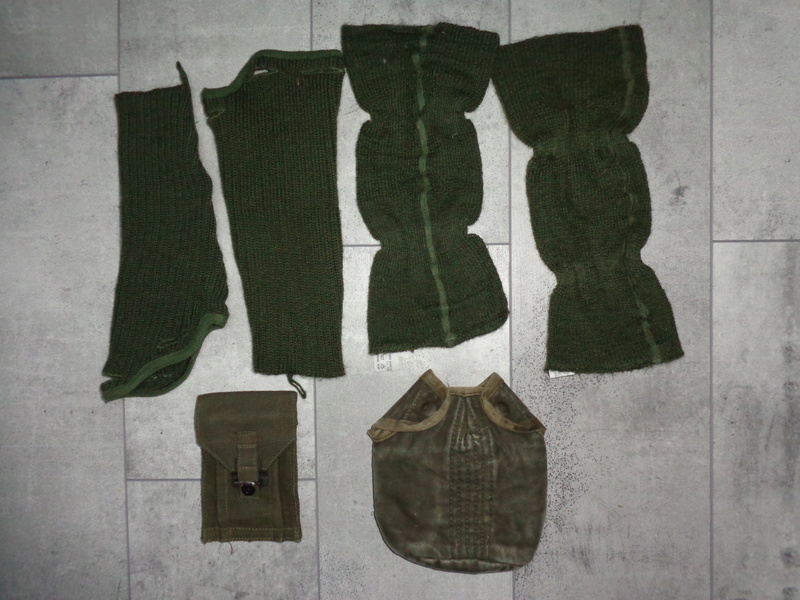 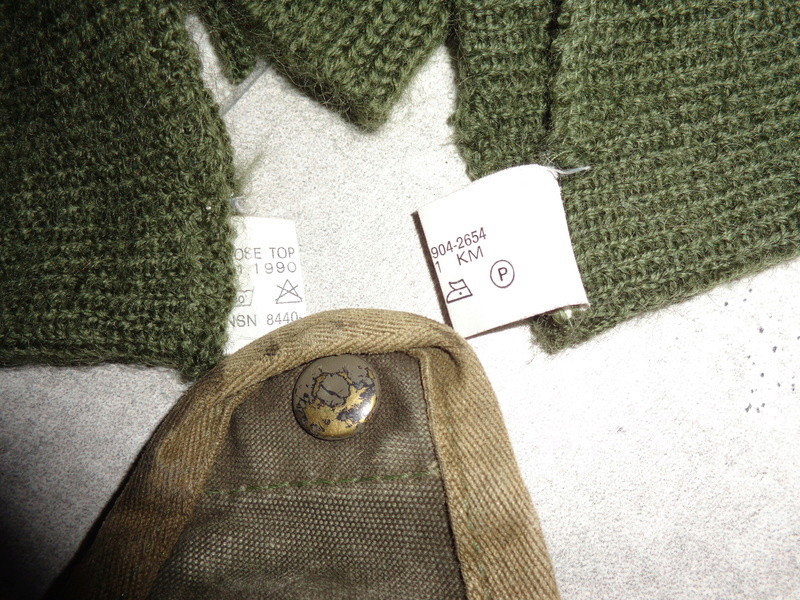 And about the LTD's, I've noticed several types that appear on KL ones (Fix RG, Knip hier, some marked with just an arrow, unmarked ones)
but also one that seems to be more or less KM specific, as I haven't seen it on any KL marked or specific stuff.
This photo is of one on a shovel carrier, but it was the photo I have at hand.
I have a canteenpouch with these LTD's (Fix RG cote a soulever), and have seen others, all without any KL markings, which would align with most other KM webbing
being unmarked. 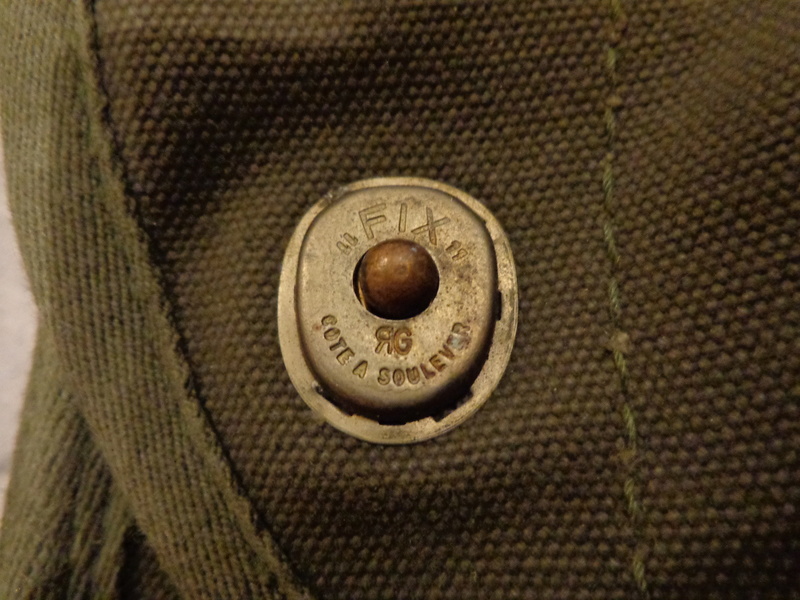 Thanks for the KM ones, as usual they have a bit more advanced equipment.

I've checked my LTD fasteners on my pouches. They 1970's one actually has a 'z' inside a shield. the 1980's cover has the usual 'knip hier' markings. The 'z' must be a manufacturers' marking.
Sponsored content