As I wrote in my intro post, I enlisted in the U.S. Army in 1996.  My collection began before that, with army surplus used for Boy Scout camping and other adventures, but the collection grew very quickly while I was still in basic training.  My primary Drill Sergeant advised us that we should possess TWO sets of field gear.  One, issued by the Army, would go out into the woods with us.  The second, personally purchased, would stay in the wrappers until inspection time and come out ONLY for that.  Hence, the purchase of a full belt kit- two M16 small arms ammo pouches, two canteens with cover, one canteen cup, two field dressing/compass pouches, one web belt, one set of suspenders, all purchased before graduation from Basic.  I think one of my sons absconded with it when he was in Scouts, as it hasn't been seen in my collector's dump in many years.  Now that he's left the National Guard and home for the regular Army, I'll have to "clean out" his room one of these days...

Anyways, this will be the first of my collection posts.  Each piece has some backstory, and I'll try to get that properly conveyed.

Piece number one: an early MOLLE medic rig that I used for OIF.  This took some practice to rig up with the parachute harness, and I'd used it for a year and a half or so before we got the order to jump on Bashur DZ.

Most of it is original, some is replacement.

The overall rig consists of:
The MOLLE medic vest (original);

The bayonet came from a gun show a few years ago, the M9 pistol, pistol magazines, and rifle magazines are part of my firearm collection.  The frag grenades are dummies from gun shows.  A lot of the content of the pouches is original, in that we were not asked to return the bandages and other items. 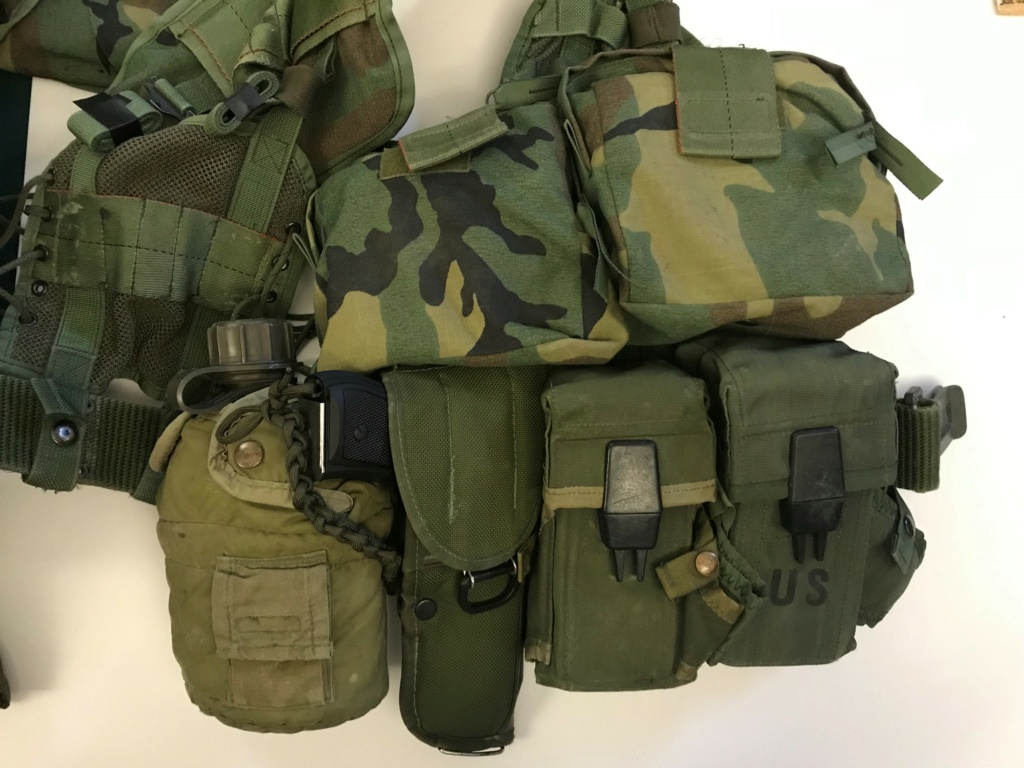 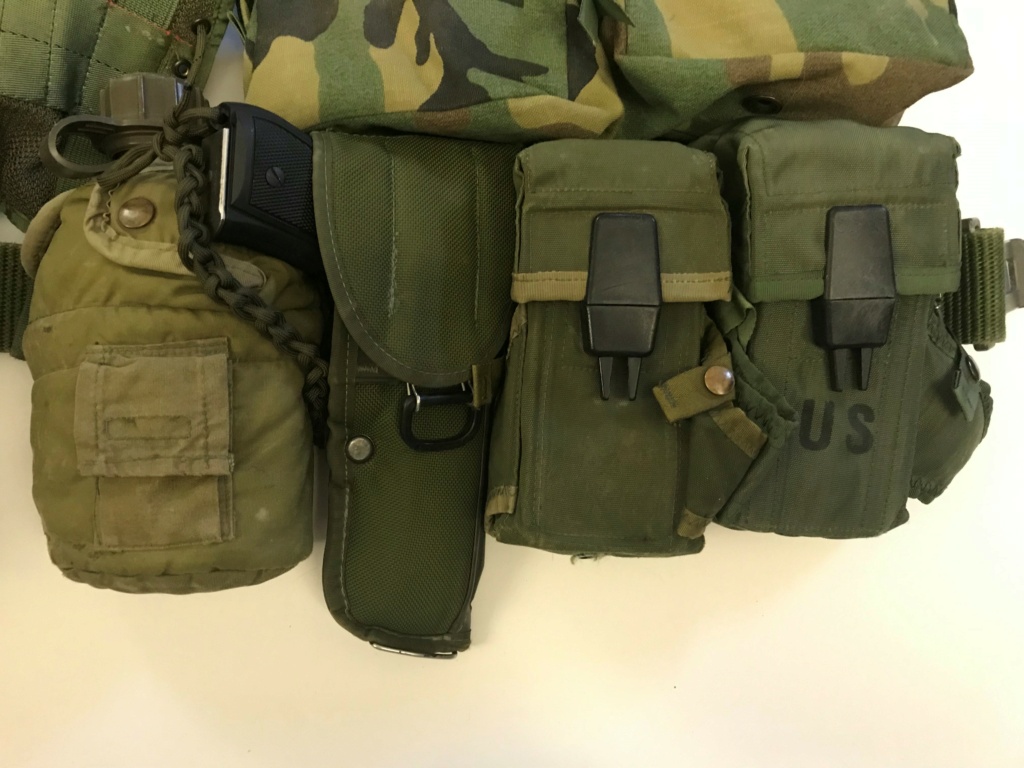 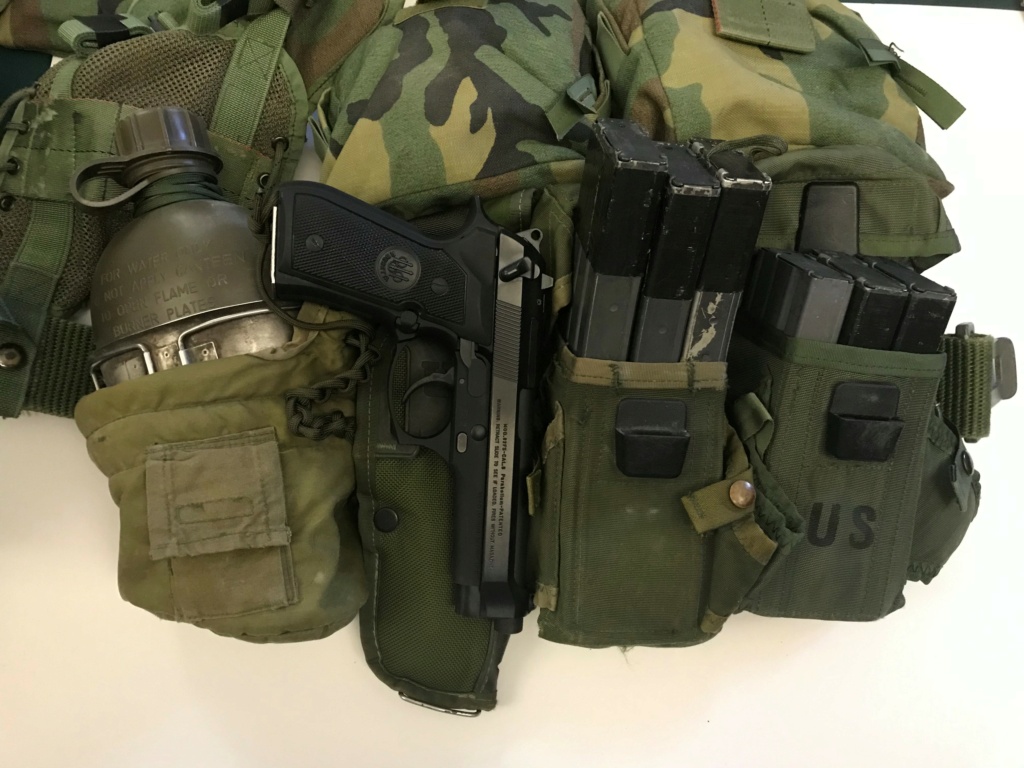 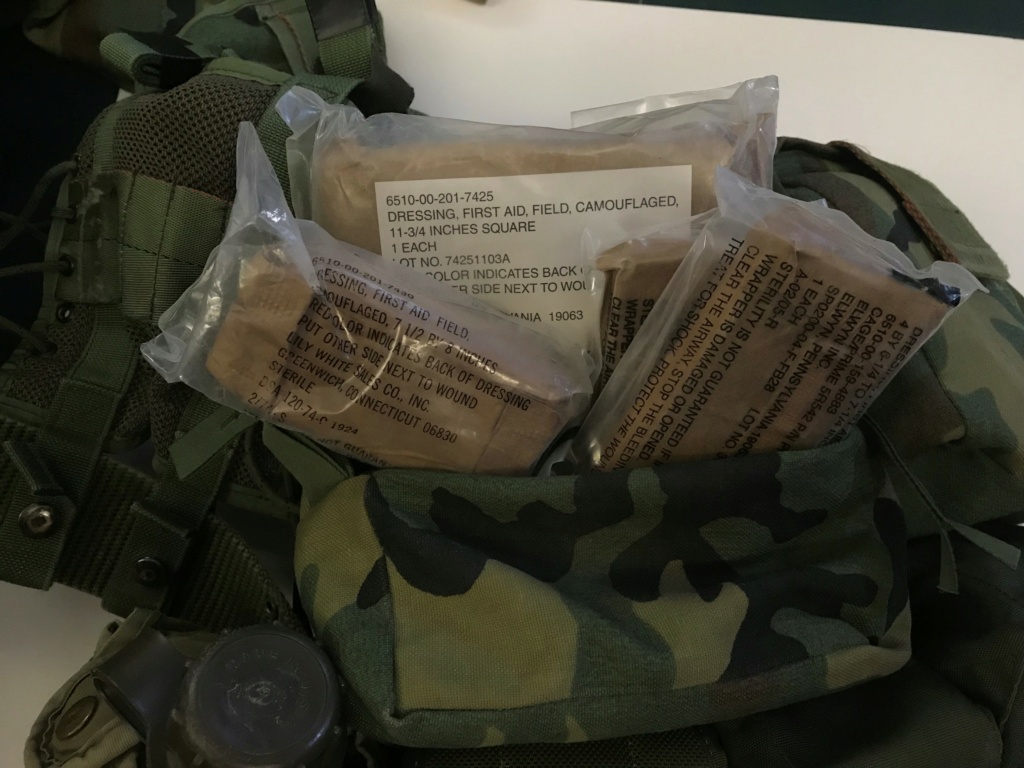 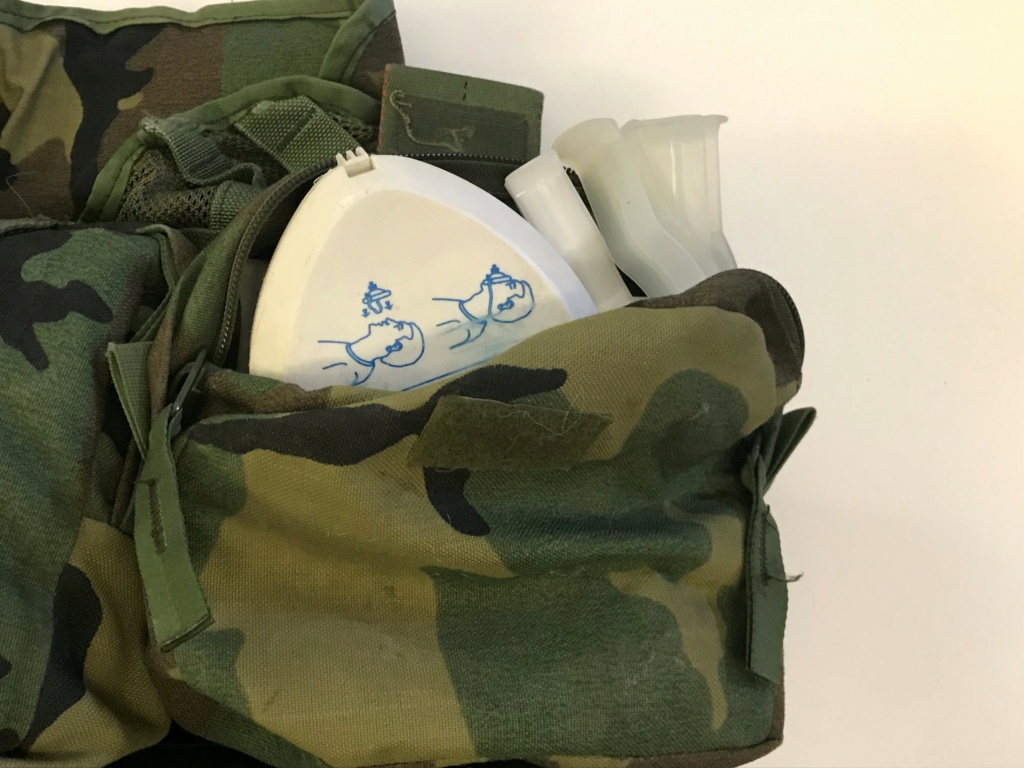 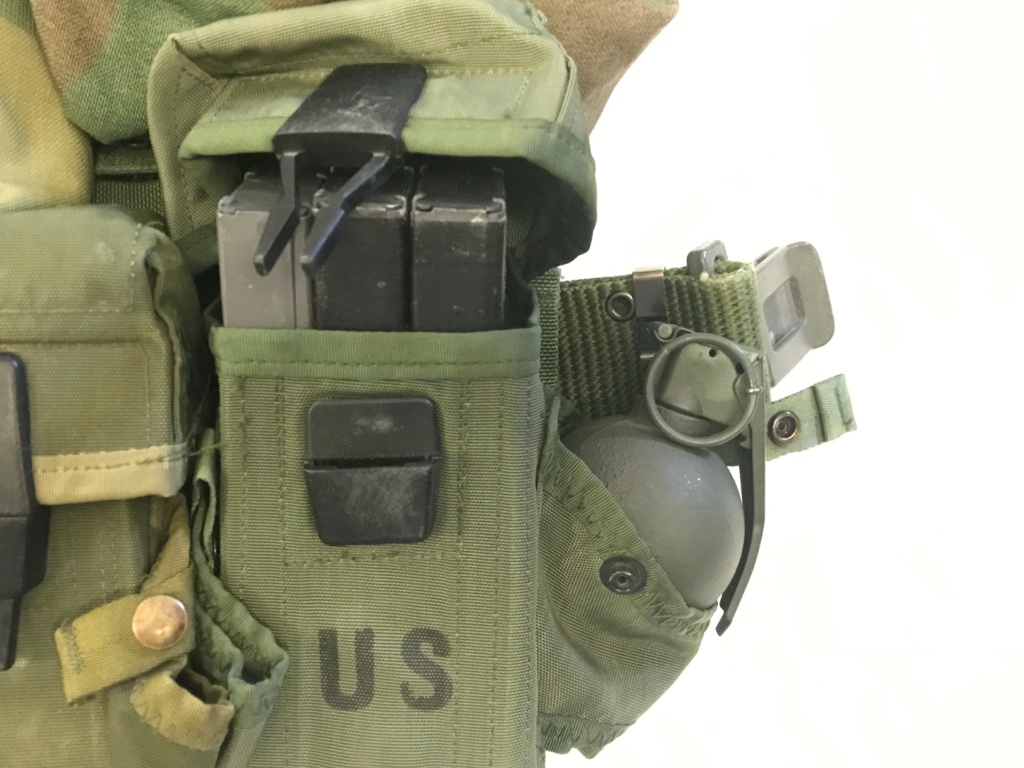 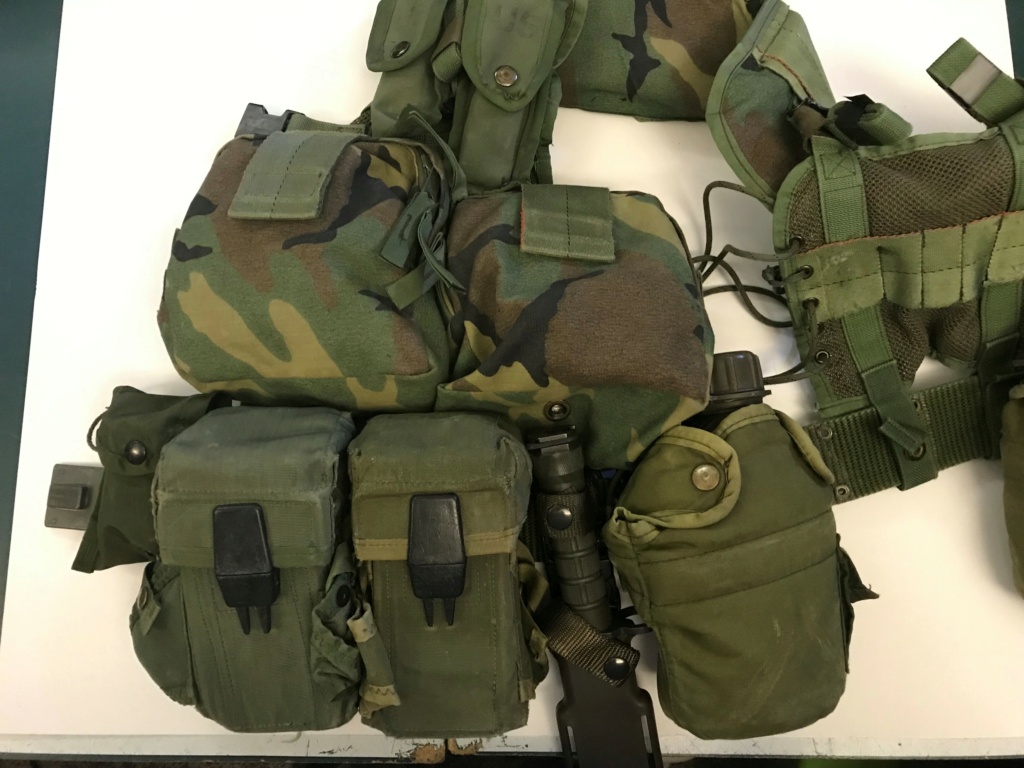 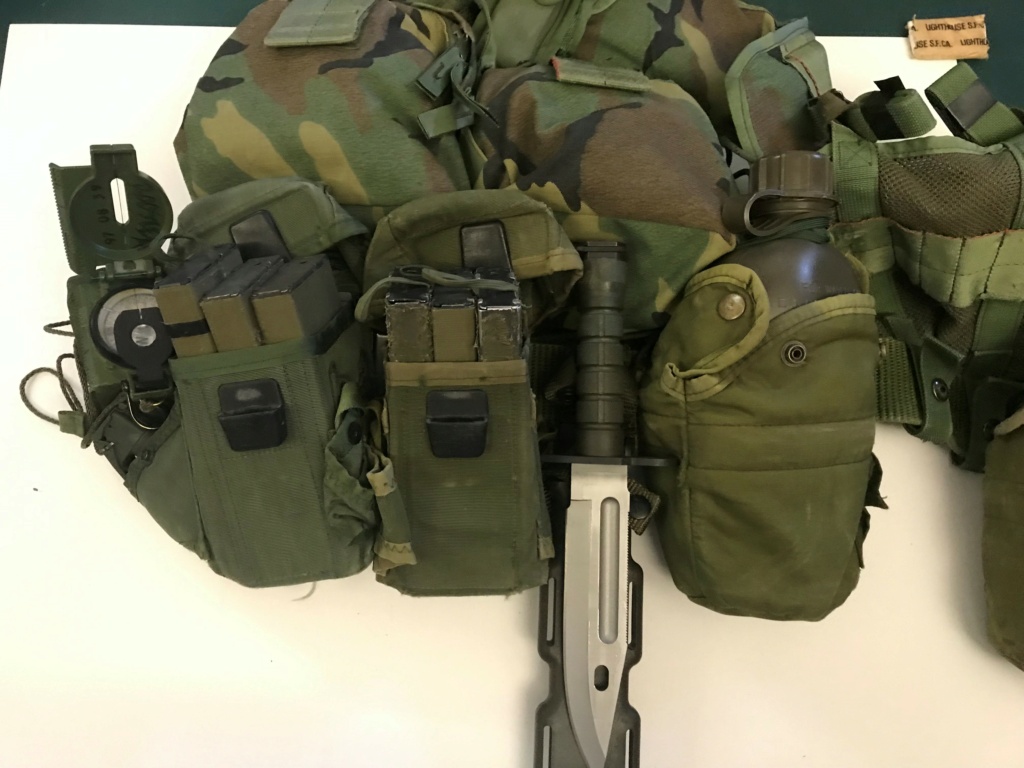 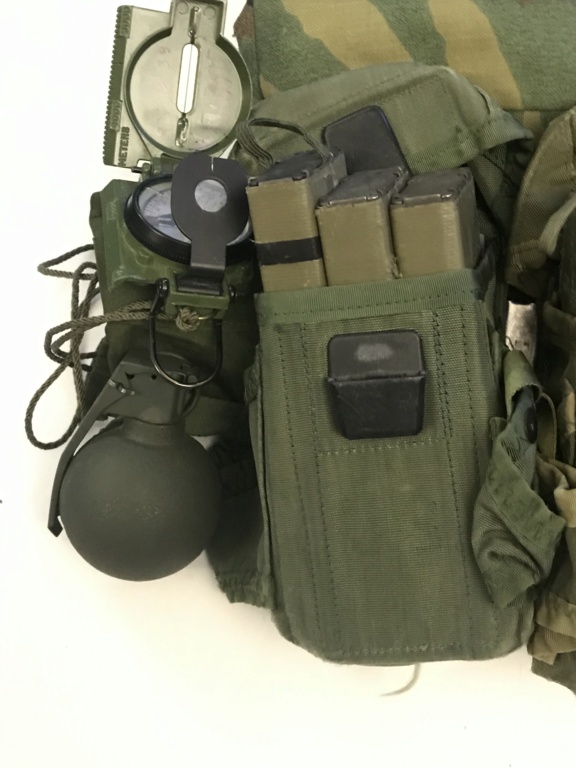 Guaranteed rain if you eat these... 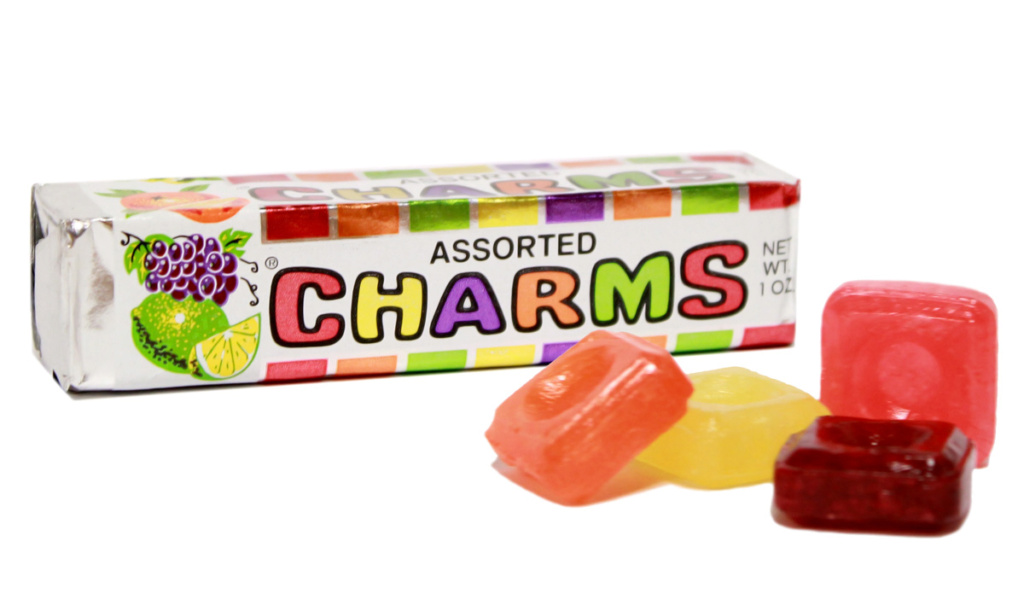 Usually discarded IMMEDIATELY on opening the MRE.
And, NO, I did not have any on me when we jumped.

AWESOME! I thank you for sharing your experience which serves us collectors and historians as it did the republic.
Wolverine

Neat set up - did you ever come across anyone who had LC-2 first aid/compass pouches sewn on to canteen covers?
Antimedic

The mod I saw most often on canteen carriers was a strobe light pouch. Come to think of it, I have one on an old-skool cut-down LC-2 setup. I'll have to dig that out. It's what I used when I first got to Italy/173d ABN before I got the vest. If I can ever find the butt pack that goes with that vest, there's a strobe pouch sewn to the left side of it nice and tight up against the seam that's closest to the body when worn.
Antimedic

Next item.  This will probably be offensive to some.  It occurred to me even as I was pulling it together that it was a shame to modify some of these things...

All of the components were found in and around the places I was working in Northern Iraq in 2003.

First, I found the CHICOM/Soviet pattern AK chest rig.  The shoulder straps were chewed up and it was missing one of the toggle loops for a grenade pouch, so I adapted it to suit my needs.  Used copper wire to secure the end of one of the shoulder straps back to the top of the main piece, and sewed some 550 cord to the grenade pouch to allow it to hold a smoke grenade.  The usual loadout was as seen here- three rifle mags, a smoke, a frag, my compass, and a field dressing-cravat bundle.  A few weeks later, I found some old-skool U.S. LBE suspenders.  I had an inkling that they were WWII or Korean War era, and had at least a little heartburn about modifying them, but they went onto the commie chest rig as seen below. 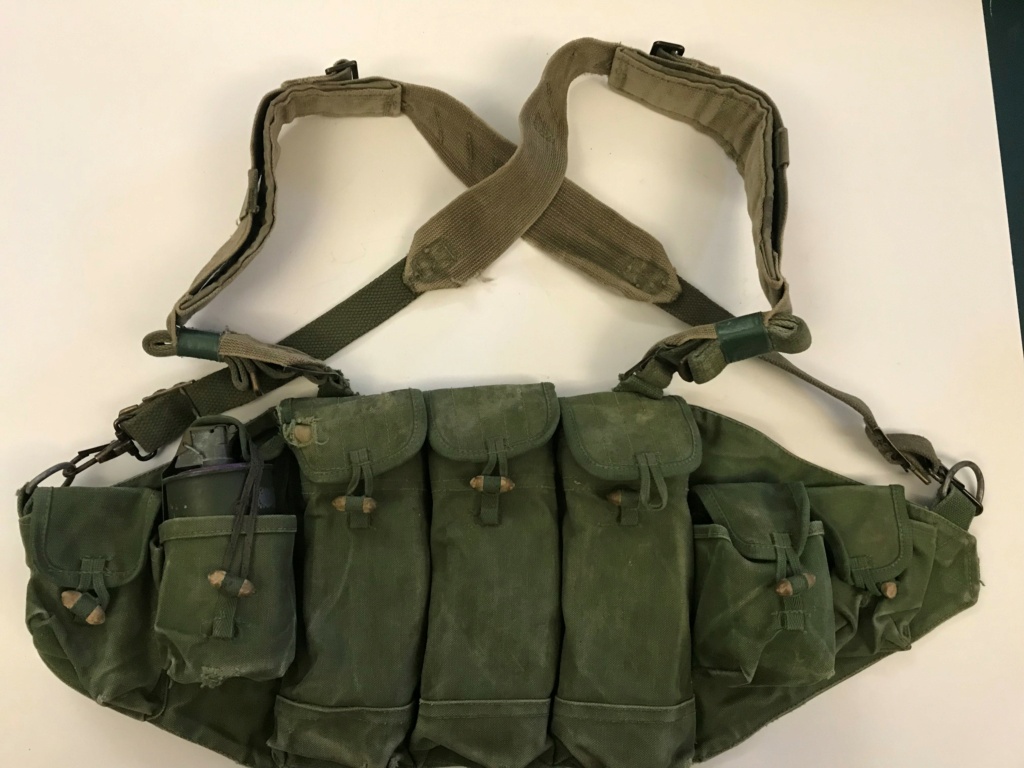 Unreadable markings on the suspenders, on the lower face of the right shoulder strap.  My suspicion on the source and era is based on the configuration.  When rigging it all up, I removed a support strap that angled out from a point a few inches up from the bottom of the front straps- points towards winning the Internets For The Day to anyone who can definitively tell me what I corrupted here. 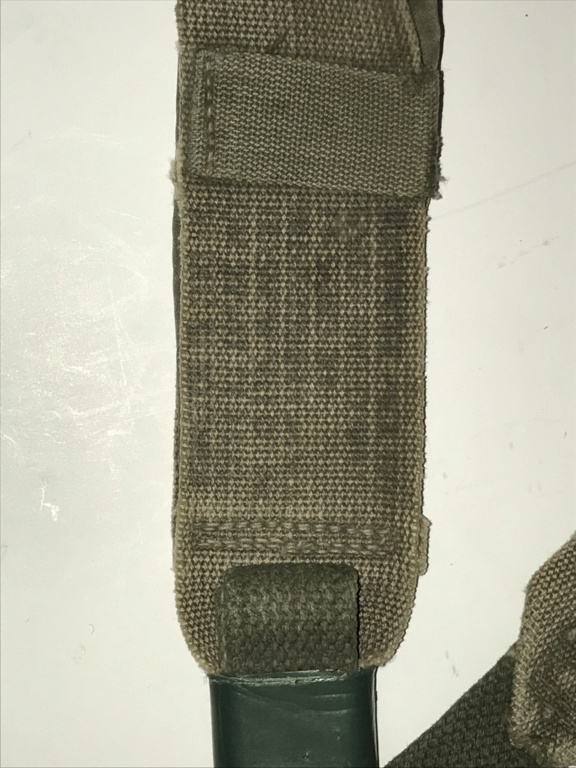 Loadout, dummy frag and smoke.  The "T - TRAINING" mark on the middle magazine is to remind me that it is damaged, and not for serious use, as the feed lips are spread and it frequently double-feeds.  I probably have period correct bandage and cravat to put back in the left end pocket, but I have only the one compass, which is in my camping ruck rather than sitting useless in my museum totes. 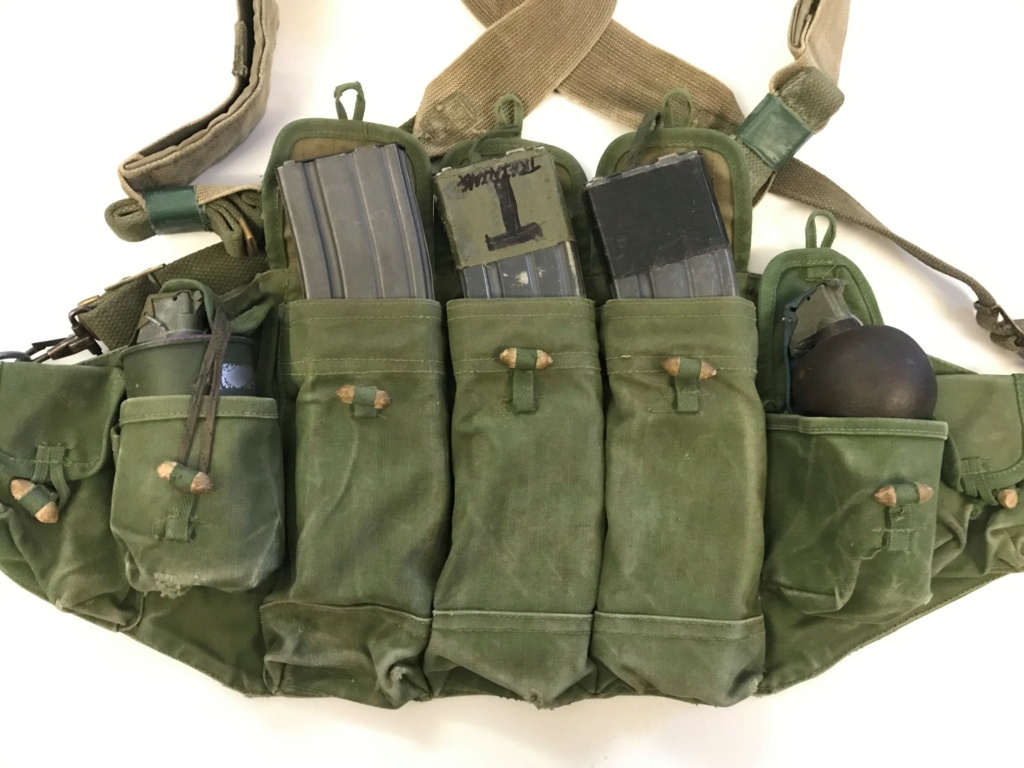 I found and incorporated other bits over the next few months.  There were some British-patterned sustainment pouches that I added to it, and incorporated my issued CamelBak, turning a classically simple chest rig into a post-modern monstrosity for a paratrooper.  While my primary assignment was Evacuation squad, several of us from HHC were made part of an ad hoc security detail for a natural gas facility.  It was a few scouts, a couple mechanics, two or three guys from the mortar platoon, a couple truck drivers, and 4 medics.  Because I was prior Infantry and knew the system, I was the 3d shift gunner on our M998 (pickup configured HMMWV with M2 BMG--incidentally a GE product made in 1943).  I used this lighter rigwhen in the truck rather than the heavy medic vest upthread.

As soon as the Brit-looking pouches reappear in the gearpile, I'll put it back together and post photos.

Nice looking rig, I don't think anyone here will claim it a sacrilege and I personally find it quite elegant! The straps are M44 type, used up until the adoption of the M56 gear. Luckily, post-WWII (which those seem to be) are still fairly common.
Wolverine

Judging by the faded stamp, those suspenders are early 1950s production. They are very common, even in NOS condition.
Antimedic

My Camillus Jumpmaster/Air Force Survival Knife. Designed in the early 1960s and issued to aircrews and Jumpmasters ever since. Camillus won the initial contract and held it until 2006, and Ontario Knife makes them now. I bought mine at the Clothing Sales store in Vicenza in 2001. I immediately modified the sheath, moving the securing strap down to right on top of the guard, removing the weak-a$$ black nylon tie down lace, and adding the paracord lace and Velcro strap. It rode on my right calf. Initially, I hated the sheath. It was a bright tan, and stuck out horribly against my BDU. After a few weeks in the field it darkened up quite a bit, and has aged pretty nicely since. When we jumped into Bashur DZ in ‘03, I used it to cut the rigging to get my HMMWV off the drop pallet when we finally found it. It also opened plenty of MREs and more than a few cans of soup. 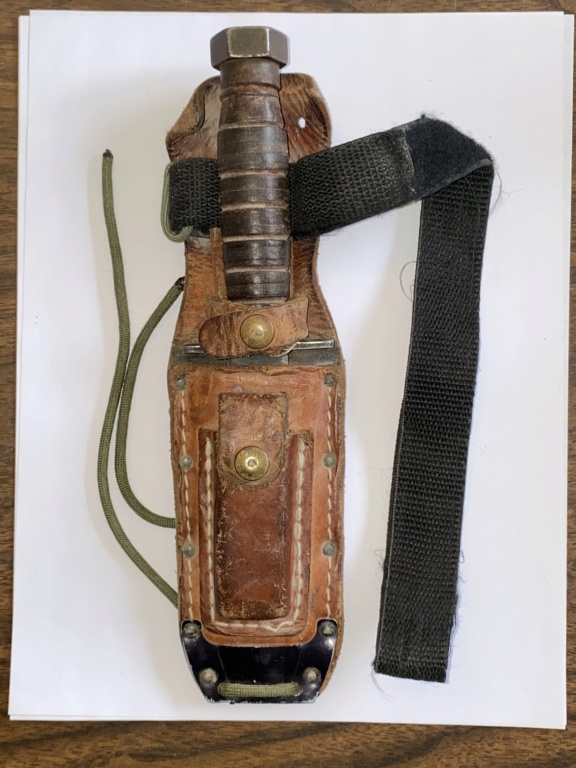 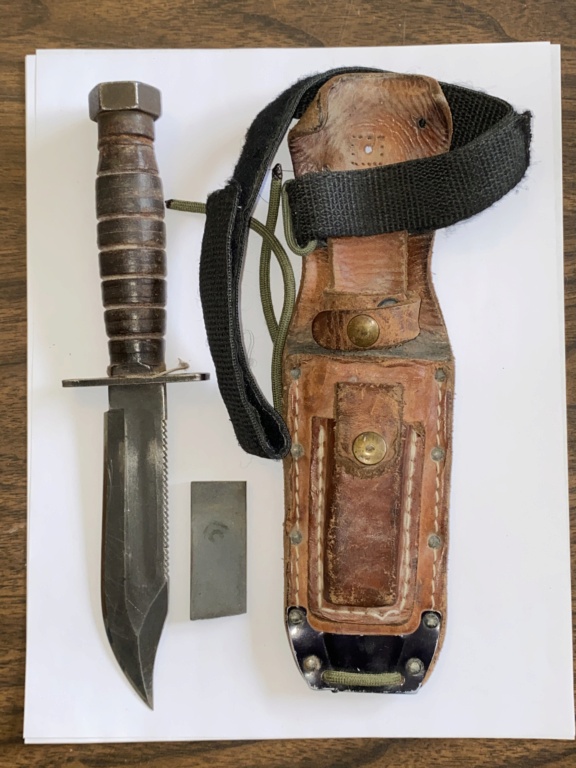 The USAF/USN/USMC survival knife is a classic !

Had a 1969 dated one from my squid days on my LBE for a couple of years of NG duty before going to an olive green Glock with sawback.  Neat plastic sheath.
filupe

Really digging your gear posts with the detailed commentary on how and why it was put together.

... and what IS the deal with Charms?  Why do they still put them in MREs if soldiers avoid them like the plague??  I didn't know about this until the 'Generation Kill' series brought it to my attention.

We have bits in our ration packs which soldiers like to bitch about (tinned cheese for instance ... and chocolate block) but I have never seen anything like the virulent hatred for Charms ... they actually look like they might be something decent to suck on whilst undertaking one of the many onerous duties that defines the military experience!
TimB

The chest rig mag pockets - are they too deep for the M-16 magazines? How to keep the magazines "up"?
stayalert

These are truly awesome photos, with the annotations bringing the cherry to the cake. You wouldn’t have any images showing either rig in full would you?

Love the survival knife. I’ve been told the metal plate at the bottom of the sheath is there to prevent the knife point from shoot through end when a pilot has to pull and eject. However looking at the surface area of the hand guard of the knife it seems a little far fetched that this would have enough force to push down on the leather and rip the stitching. Do you know if there is any truth to this?
Sponsored content