6 Color Desert BDU named to a McCormick. Very unusual in the fact that he has no unit that he is attached to. 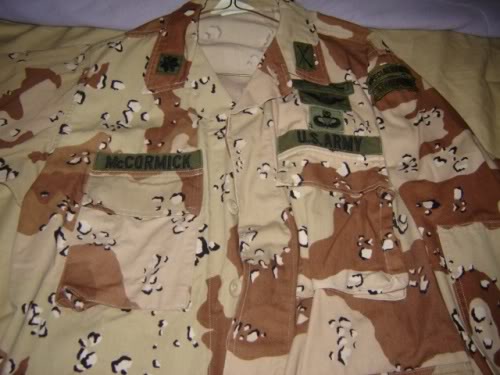 3 color jacket to a Sgt. Lupton. Has in country made BOS and nametape. Brown thread on tan twill.. Patches are OD 83rd ARCOM and 82nd AB(combat patch), Rigger, and basic jump wings. Jacket is 90 dated rip-stop poplin with sweat shield on back. Sgt. rank is pin on type. 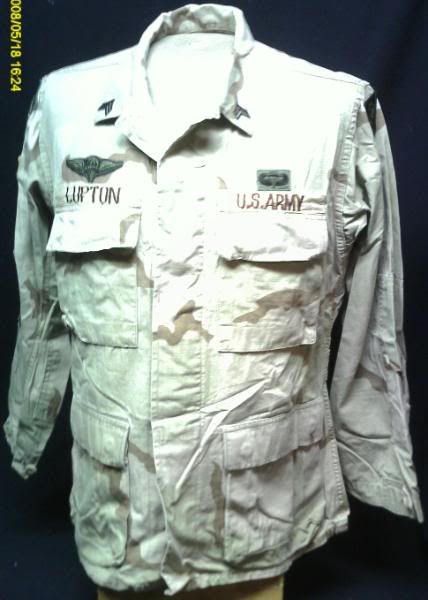 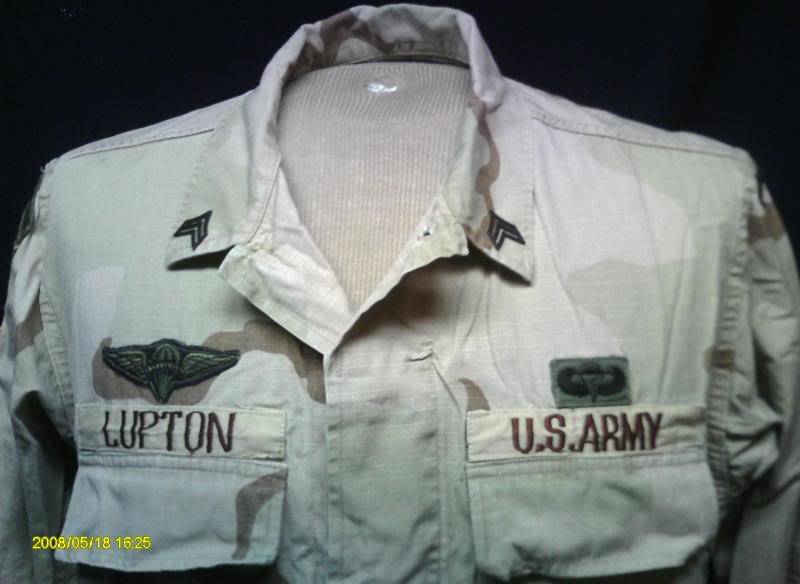 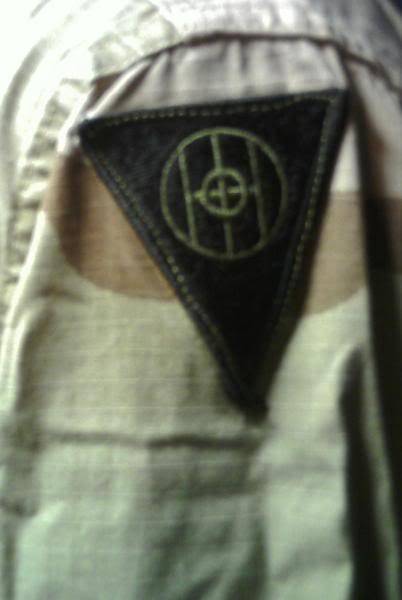 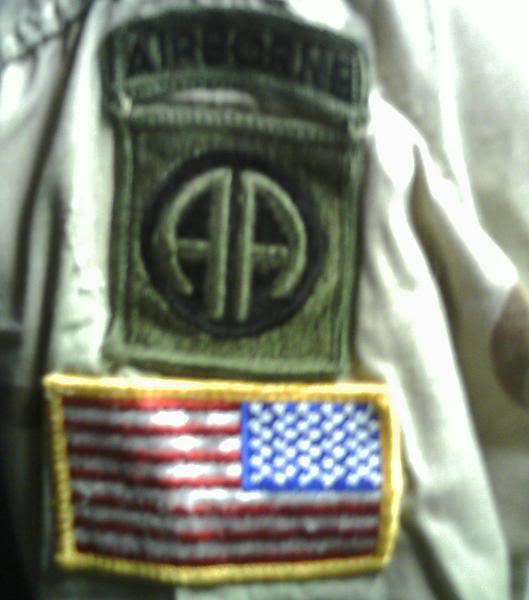 ADMIN wrote:6 Color Desert BDU named to a McCormick. Very unusual in the fact that he has no unit that he is attached to.

Actually the AIRBORNE tab is not an indication of passing a qualification or selection course (like the RANGER or SPECIAL FORCES tabs), but is in fact part of the unit insignia. It cannot be worn by itself, and is always an indication that the unit you are assigned to has Airborne status.

I have seen both RANGER and SPECIAL FORCES tabs worn without an SSI, but in every instance I can think of they were always officers of General grade.
Eric.
Philip

Okay....I did a little research on this subject and this is what I found about the absence of shoulder sleeve insignia on the left sleeve. This comes straight from the following manual:
Army Regulation 670–1
Uniforms and Insignia
Wear and
Appearance of
Army Uniforms
and Insignia

On page 261 number 7 of the PDF file this is what it states concerning the abscence of SSI:

Here is the link if you wish to view the document in it's entirety: http://www.apd.army.mil/pdffiles/r670_1.pdf

Now I asked myself what exactly HQDA was and this is what I found:


"Headquarters, Department of the Army is the executive part of the Department of the Army at the seat of Government. It is the highest level headquarters in the Department and exercises directive and supervisory control over it. HQDA is composed of the Office of the Secretary of the Army; Office of the Chief of Staff, Army; the Army Staff; and specifically designated staff support agencies. It is not restricted to agencies and personnel located in the Washington DC metropolitan area, but includes dispersed agencies and personnel performing "national headquarters" functions, as distinguished from "field" or "local" functions. Within Army regulations, those support and reporting responsibilities set aside for MACOMs generally apply to HQDA unless otherwise specified."

Link to the site: http://www.hqda.army.mil/hqda/main/home.asp

Now....there is no guarantee that the soldier who wore this uniform was assigned to HQDA. I know the other uniforms showed him as belonging to the West Virginia National Guard. This was the only uniform without SSI.

I have another uniform that belonged to a SF Lt. Col. without SSI as well. It is certainly not a common set-up to not wear SSI, but it does happen. Like Eric said, you will see it mostly on General Officers uniforms, but according to the Army Regs, it is possible to see it on officers not of General rank.
Arch
_________________
Always looking for Central American militaria 1965 to 1991. Especially items relating to Coronel Velasquez El Salvador Armed Forces
oda196

You probably were looking at photographs of a Ranger Instructor. A student attends Ranger School in order to earn the Ranger tab, so it would be impossible for a student to be wearing a tab if he is attending the school. That would be like wearing parachutist wings or the SF tab while attending those courses.

Yeah, that is correct about the HQDA, Arch. This is possible, except it does not explain the AIRBORNE tab on the sleeve. You simply cannot wear an AIRBORNE tab by itself. It is a part of the SSI, and not a separate qualification or distinction. My guess is the SSI was removed, or there is something else amiss.
Eric.
nkomo

I asked the question to a fellow member (JSOCSFC) and this is what he replied:
"Hey Arch,

He was assigned to HQDA.

He was assigned to JCS in a SF/Abn slot. At that time in the 80's-90's, If I remember, those officers (and a few enlisted)assigned to JCS were authorized their own beret flash, as they were in ABN coded positions, but as they werent in a unit authorized a SSI,this "weird" set up was common.The Airborne tab signifies current Abn status of a given unit, but as there WAS no patch for them, so it was worn (along with whatever personal qual tabs the soldier had)by itself, on the sleeve.

He/his unit diddnt have a SSI (SF arrowhead) to issue him, and he just had what he had sewn on while waiting for the patches to come in either to unit supply or MCSS.
As it has been stated this guy was with WV NG,and there arent many bases to get patches and stuff at, this isnt that far-fetched.You would sew on what you had while waiting for the rest to get to you. This was acceptep by many NG unit Cdrs,especially where thre is no MCSS close by the NG unit.

these are my guesses only-Hope they help. You can post these on the site if you want. Take care,

These are his guesses. JSOC has been in the USSF for over 20 years and I trust what he says. Granted it is an odd set up, but I don't think it is a made-up piece. Paying what I did for it ($5) and seeing it was part of a bigger grouping, I doubt it was a made-up piece. However, I do see your point concerning the ABN tab. Thanks for everyone's input.
Arch
_________________
Always looking for Central American militaria 1965 to 1991. Especially items relating to Coronel Velasquez El Salvador Armed Forces
Sponsored content