The 36th Infantry Division, also known as the Texas Division, is a modular division in the Army National Guard. It was activated for service in World War II on November 25, 1940, and was sent overseas in April 1943.
It was reorganized in 2004 from the 49th Armored Division.

The 36th Infantry Division was originally activated as the 15th Division, a Army National Guard Division from Texas and Oklahoma. The designation was changed to the 36th Division in 1917, possibly in July. It consisted of the 71st Infantry Brigade (141st and 142nd Infantry Regiments) and the 72nd Infantry Brigade (143rd and 144th Infantry Regiments). The unit was sent to Europe in July 1918 and conducted major operations in the Meuse-Argonne Offensive. During World War I, the division suffered 2,584 casualties consisting of 466 killed in action, and 2,118 wounded in action. The unit was inactivated in June 1919.

Training
The 36th was called up again for Active Federal Service on 1940-11-25 at San Antonio, Texas. The Division loaded all of its equipment, Mustered its personnel, and departed for its Mobilization Station at Camp Bowie, Texas on 1940-12-14. The 36th moved to Brownwood, Texas on 1941-06-01, where it participated in the VIII Corps Brownwood Maneuvers until 1941-06-13. The Division then returned to Camp Bowie.
The Division then moved to Mansfield, Louisiana, and took part in both the August and September 1941 Louisiana Maneuvers. The Division then returned to Camp Bowie on 1941-10-02, where it was reorganized into a Triangular Infantry Division on 1942-02-01.
The Division then moved to Camp Blanding, Florida on 1942-02-19, and participated in the Carolina Maneuvers between 1942-07-09 and 1942-08-15. The Division then was Staged at Camp Edwards, Massachusetts on 1942-08-17 for its Port Call.
The Division departed the New York Port of Embarkation on 1943-04-02 for North Africa.
[edit]Combat Chronicle
The 36th Infantry Division landed in North Africa, 1943-04-13, and trained at Arzew and Rabat. It was Assigned to the VI Corps, Seventh Army, but attached to SOS, NATOUSA, for supply. The Division first saw action, 1943-09-09, when it landed by sea at Paestum on the Gulf of Salerno against intense German opposition. The Germans launched counterattacks on September 12-14, but the 36th repulsed them with the aid of air support and naval gunfire, and advanced slowly, securing the area from Agropoli to Altavilla.
After a brief rest the 36th returned to combat, 15 November. It captured Mount Maggiore, Mount Lungo, and the village of San Pietro despite strong enemy positions and severe winter weather. This grueling campaign was marked by futile attempts to establish a secure bridgehead across the Rapido River, 1944-01-01 to 1944-02-08. After assisting the 34th Division in the attack on Cassino and fighting defensively along the Rapido River, the severely depleted 36th withdrew, [[1944]-03-12]], for rest and rehabilitation. On 1944-05-25], the Division was sent by sea to the Anzio bridgehead to take part in Operation Diadem. It drove north to capture Velletri, 1 June, and entered Rome on the 5th. Pushing up from Rome, the 36th encountered sharp resistance at Magliano, but reached Piombino, 1944-06-26, before moving back to Paestum for rest and rehabilitation.
On 1944-08-15, as part of the American 6th Army Group, the division made another amphibious assault landing, against light opposition in the Saint-Raphaël-Fréjus area of Southern France as part of Operation Dragoon. A rapid advance opened the Rhone River Valley. Montelimar fell, 28 August, and large German units were trapped. On 1944-09-15 the Division was attached to the French First Army.The 36th advanced to the Moselle River at Remiremont and the foothills of the Vosges. In a grinding offensive, the Division crossed the Meurthe River, breached the Ste. Marie Pass and burst into the Alsatian Plains. The enemy counterattacked, 1944-12-13, but the 36th held the perimeter of the Colmar Pocket. On 1944-12-15, the Division was released from attachment to the First French Army, and returned to the control of VI Corps. The German Army counterattacks out of the Colmar Pocket were so fierce, that at times, the field artillery was forced to fire over open sights, at point blank range to stop them. On 1944-12-20, the Division resumed the attack, advancing northward along the Rhine River to Mannheim meeting heavy resistance at Haguenau, Oberhofen, and Wissembourg. In this action Company "G" 143rd Infantry Regiment gained a Presidential Unit Citation. On 1944-12-27, the Division was reassigned to XXI Corps, and the Division was pinched out and returned to Seventh Army Reserve on 1944-12-30.
The Division was taken out of the line for the first time since it had landed in the south of France. On 1945-01-03, the Division was reassigned to XV Corps. On 1945-01-18, the Division was reassigned to VI Corps. It returned to the line early March 1945. The 36th was reassigned to the Seventh Army on 1945-03-29, and moved to the Danube River on 1945-04-22. It was reassigned to the XXI Corps on 1945-04-27, and attacked the "National Redoubt" at Künzelsau on the 30th. The 36th has been recognized by the United States Holocaust Memorial Museum as a liberating unit for their work securing the subcamps of the Dachau concentration camp system.[2] By 1945-05-08, the division was based in Kitzbuhel, Austria where it captured Field Marshall Gerd von Rundstedt, the commander of all German army forces on the Western front, and it’s final station was at Kufstein, Austria on 1945-08-14.
After 400 days of combat, the 36th Infantry Division returned to the United States in December 1945. It was returned to the Texas Army National Guard on 1945-12-15.

On 1 May 2004, the 49th Armored Division of the Texas Army National Guard was officially deactivated and the 49th Armored Division was redesignated the 36th Infantry Division. After half a century, the "Fighting 36th" was reactivated to help transform Texas' military forces into a more mobile and lethal fighting force, committed to helping fight the global war on terrorism and carrying on the proud legacy established by its predecessors.


36th Infantry Division soldiers instruct Honduran soldiers.
In January 2004, 74 soldiers from Alpha Battery (TAB) 2nd Battalion 131st Field Artillery were activated for federal service in support of Operation Iraqi Freedom. Alpha Battery commanded by CPT Alvaro Gomez entered federal service in Fort Sill, OK. Under the supervision of 1SG Alfredo Barrera, the soldiers trained up and deployed to Iraq. While readying their equipment in Kuwait, Alpha Battery was given her mission and the five Radar Sections were split up. One AN-TPQ37 Radar section (SSG Gonzales) was attached to the 1st Marine Division in Al Taqadum another (CW3 Earnest Metcalf) was assigned to the 1st Infantry Division at LSA Anaconda and the three AN-TPQ36 Radar sections (CW2 Davidson, CW2 Bien, and SSG Johnson) were assigned to the 2nd Infantry Division in Mosul. The headquarters and support platoon (1LT Christopher Galvan) operated out of Forward Operating Base Freedom in northern Mosul. In addition to the target acquisition mission, the support platoon supplemented patrols conducted by the 25th Infantry Division Fire's Brigade FIST Team and provided security for the FOB's perimeter by manning the entrance gates and watch towers. At the conclusion of the Battery's deployment, the unit was awarded three Bronze Star Medals, 1 Purple Heart Medal, 47 Army Commendation Medals, 74 Combat Action Badges, several Memorandums of Appreciation from Command Staff, and were given the privilege of wearing the Unit Insignia for wartime service from the 2nd Infantry Division, the 25th Infantry Division, the 36th Infantry Division, and the 1st Infantry Division.
In 2005 approximately 100 soldiers of the 36th Infantry Division deployed to Bosnia for Enduring Mission 3 which was a continuation from previous IFOR and SFOR missions. When Task Force Strike left Eagle Base in Tuzla late 2006, it marked the end of an American military maneuver presence in Bosnia which had existed for almost a decade after the Dayton Accords.
In 2005, over three thousand troops from the 56th BCT, 36th ID deployed to Iraq as part of the largest deployment of Texas troops since World War II.
In 2005-2006, 800 Soldiers of 3d Battalion, 141st Infantry Regiment, 72d Brigade, 36th Infantry Division deployed to Afghanistan for combat operations. The Battalion was attached to the 504th Infantry Regiment of the 82d Airborne Division and earned a Joint Meritorious Unit Citation.
In 2006, the 1st Squadron, 124th Cavalry Regiment, 36th Infantry Division served as the first cavalry unit as peacekeepers in the Sinai Desert for the Multinational Force and Observers. The force was made up of soldiers from several units of the 36th Infantry Division including 1-112th AR, 2-112th AR, 3-112th AR, and 3rd Mech.
In late 2006, Company B of the 3d Battalion, 144th Infantry Regiment deployed to Iraq after pre-deployment training at Ft. Dix, NJ and were actively engaged in combat operations. They returned in late 2007.
In late 2005 to late 2006, the 36th Infantry Division was the major leading force for KFOR7, the peacekeeping mission on Kosovo.
The Combat Aviation Brigade, 36th Infantry Division shipped to Iraq in September 2006 for a planned one-year deployment.
On May 7, 2007 3d Battalion 144th Infantry Regiment mobilized as "Task Force Panther" in support of Operation Iraqi Freedom. "Task Force Panther" trained at Camp Shelby, MS, and, after validation, forward deployed to Kuwait, where they processed into theater and transferred into Iraq.
On August 28th, 2008, more than 3000 Soldiers of the 56th IBCT again deployed to Iraq in support of Operation Iraqi Freedom.
The organization of the 36th Infantry Division is still unclear, as the Army is undergoing a transformation to brigade units of action and the 36th is not expected to complete its reorganization until 2012.

WW2 patch (front and back) 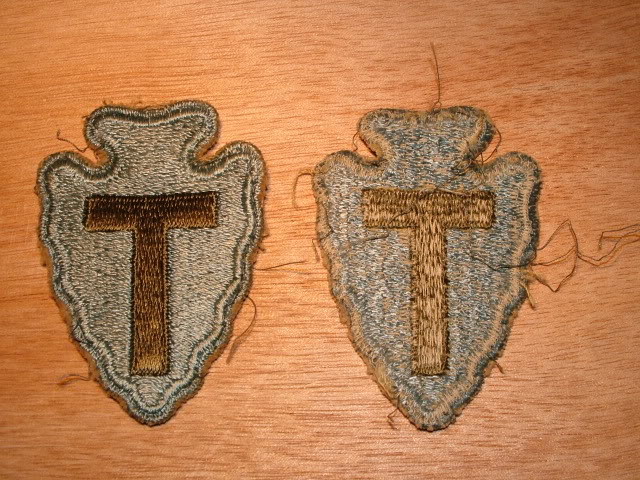