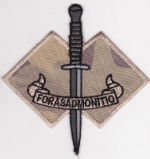 So, I just returned from my 2 week trip to Dahab/ Egypt and only ONE guy was willing to let me take a picture of his brassard.
Since my arabic is limited to saying 'La Shokran' when they tried to pull me into their souvenir-shops, I have no idea
what the brassard says.
Only the fact that the guy was sitting at some sort of traffic controll check point suggest that he's part of some traffic police unit.

Since Dahab is located on the Sinai there was no Military in the area except for a UN observer post.