HI All,
Came upon this old pic I took on one of several trips to South Africa. This particular trip was pretty spectacular. First stopped in Lusaka, where I took a taxi to Nkomo's house by Kaunda's presidential palace. All that was left was the foundation. Those of you who recall the Rhod SAS staged a daring raid driving overland disguised as Zambian Army to Lusaka from Rhodesia, this was to target Nkomo after bragging his people shot down an Air Rhodesia airliner (amazingly I was in Rhodesia in 78 when that airliner was shot down).

From there on to Harare where I was lucky enough to stay as guests with Ian and Janet Smith (he was a huge hero to me). Then on to RSA, met Peter Badcock, artist who did various rhod and s. a. art books, shadows of war, images of war etc.

Met Barbara Cole and the Three Knights (ex Rhod SAS who helped her with the exc. book on Rhod SAS "the Elite" - a great read! Bob Mckenzie, Peter Cole, and COlin Wills).

Then Bob and Colin rode with me in my rental to Transkei, met Reid Daly. At the time I was a keen collector of Rhodesian stuff, he pulled his scout wings off and let me see them #0001, the wings were later stolen I found out.
Anyway a memorable trip. This photo was taken near Port St. Johns where Transkei SF trained, in the pic is a Transkei aid to Reid-Daly his name escapes me, Reid-Daly and Bob Mckenzie, as you know Bob was later killed in Sierra Leone. He was an incredible guy to talk to. 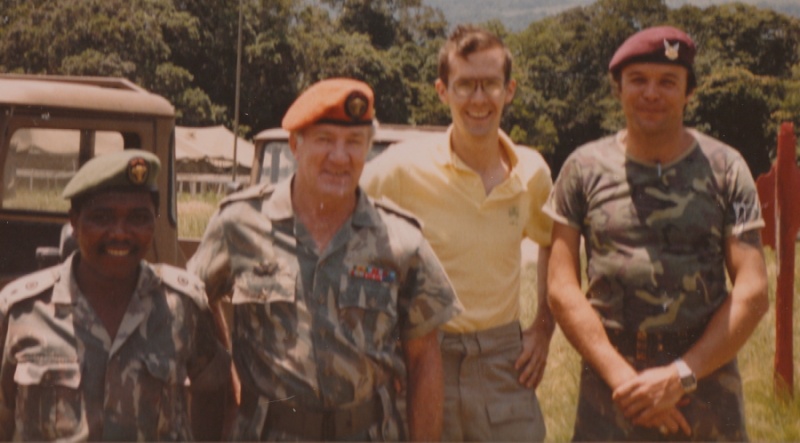 I echo Ben's sentiment - certainly an historic picture. I have a Ian Smith signed copy of 'Contact' and all the books mentioned above so I'm familiar with all those named above. What a great privilege being able to meet them all ...

You might want to post this over at the 'New Rhodesian Forum' Forum dedicated to all things Rhodesian (including militaria), they would certainly appreciate the significance of this.

WOW....I have done some research on the Rhodesian conflict, VERY interesting and chock full of history.
zvez

Thanks guys!
Wow, didn't know about that forum, I'll check it out.

I met some of the most incredible people during my months in Rhodesia in 78 during the war and then on subsequent trips to zim and rsa.
Chris
Sponsored content