Well....I have been after something like this for quite some time. This is a heavily used Iraqi made AK chest rig (4 cell) and a portion of a Mahdi Army/Mahdi Militia headband.

The chest rig is made of a HEAVY tarp material. The material used is much heavier than any other Iraqi made AK chest pouch that I own.

The headband is made of a velveteeen type material. Not sure if it is a headband or armband.

Figuring I will never find an insurgent outfit, I may very well get this framed and display it on the wall. 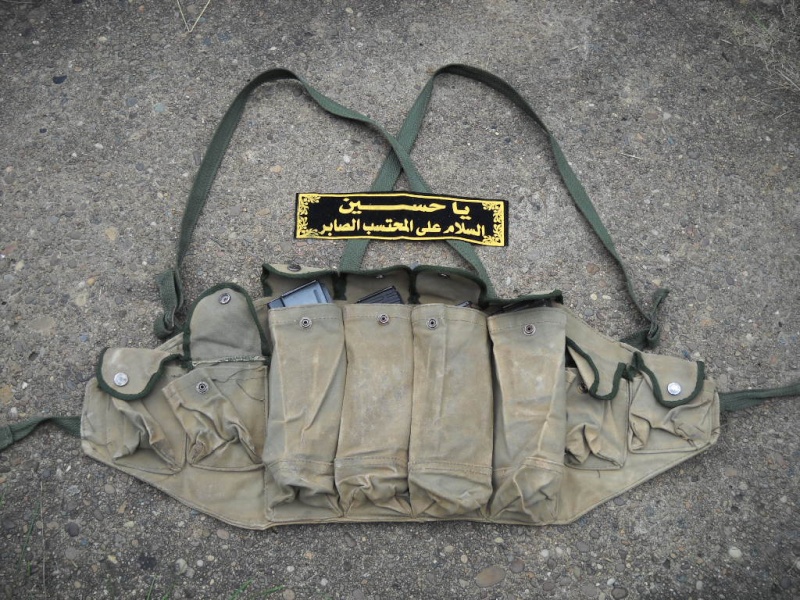 Siege of U.K. bases in Basra

Note: The headband has different arabic writing but characterstics are exact same. 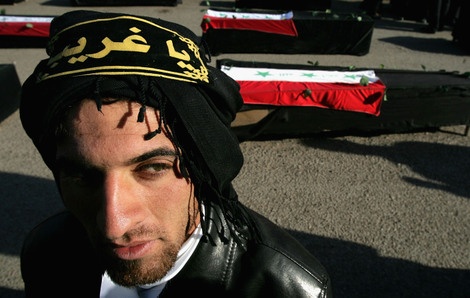 An Iraqi supporter of Shiite cleric Moqtada al-Sadr stands near mock coffins, symbolizing killed Mahdi army members, during a rally on February 21, 2008 in the Sadr city Shiite neighborhood of Baghdad, Iraq. Shiite cleric Moqtada al-Sadr is expected to announce within days whether to extend his Mahdi Army ceasefire or not. Al-Sadr declared a six month truce on August 29, 2007 which some Iraqi and US military officials claim has played a vital part in reducing sectarian violence. The six month truce is set to expire at the end of February. By Wathiq Khuzaie/Getty Images. 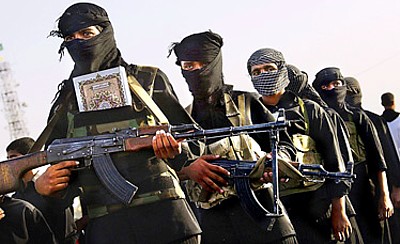 Above: Members of the Mahdi Army. Tensions have been rising for months between the two primary Shia militias known as the Badr Brigade and the Mahdi Army as each struggles for political dominance. The Badr Brigade is the paramilitary force of the largest Shia political bloc, the Supreme Islamic Council in Iraq. The Mahdi Army is the paramilitary force of the Sadrists, headed by Moqtada al-Sadr. The Iraqi security forces are heavily infiltrated by both, with each having varying amounts of control in different areas. Below: A scene from Sadr City. Al-Sadr has built his following from millions of the poorest Iraqis, and his organization has provided food, money and medical care when none else was available.