I found this rummaging through a bunch of bags of as-yet unsorted kit at the surplus shop. Appears to be unused, as the colours are bright and fast. Not sure when exactly these came about, but I have seen photos of squaddies wearing them in the Falklands conflict. This one is kind of small, but you can make out the hat flaps.

From what I can gather, these hats are quite despised and not often worn because of their ridiculous appearance. Not sure how true that is, (it does look funny though) but I will say that I tried it on and I won't deny that it's warm; but the "fur" lining is incredibly itchy (as the name implies).

But, it isn't something I have seen very often, so I grabbed it. I think they're usually worn with the bill turned up, but I couldn't get it to stay that way when I took the photos... 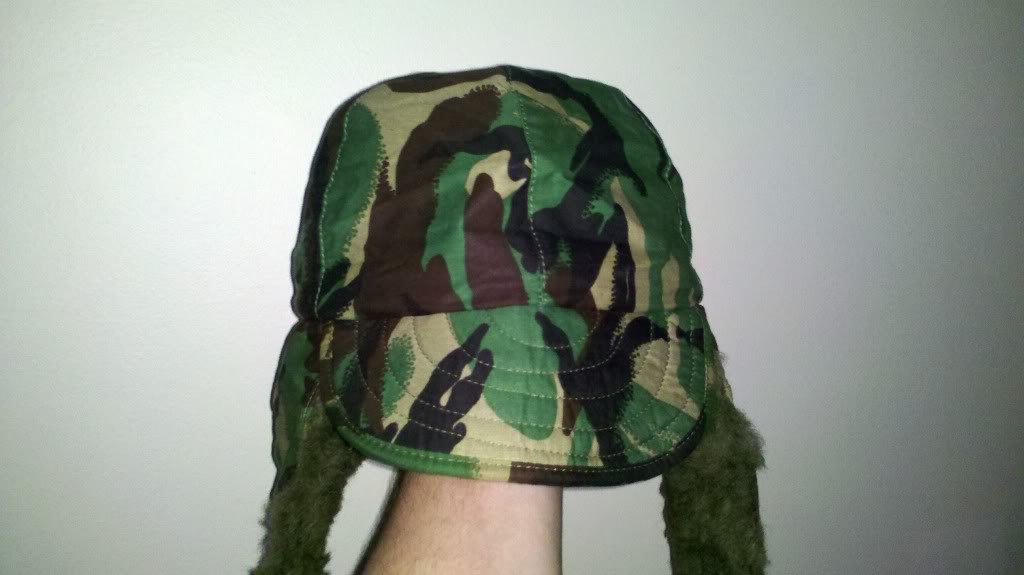 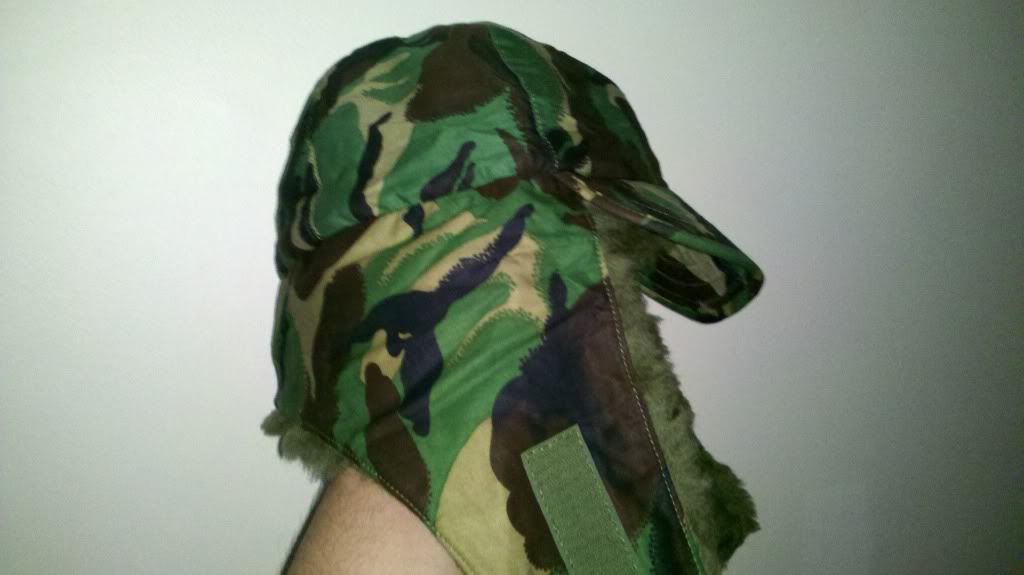 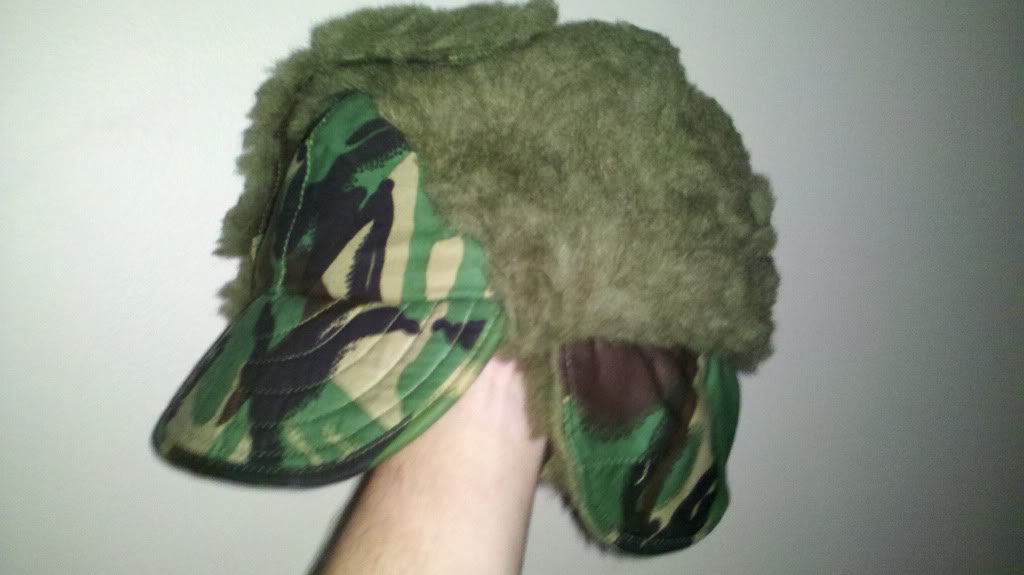 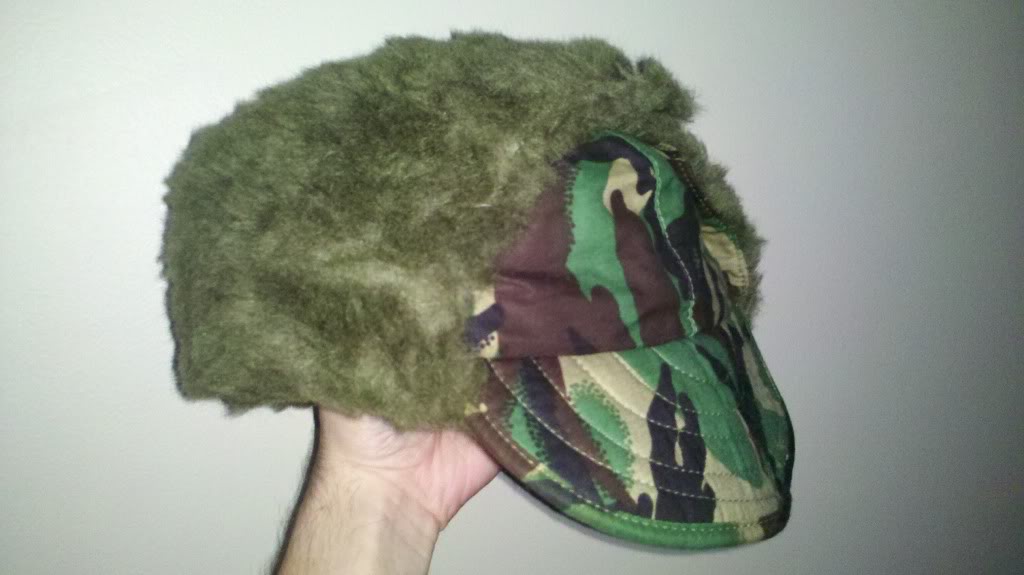 The type with the fake fur lining was despised as it itched like hell but the quilted lined ones were and still are very popular-i wear one in the winter and they are VERY VERY warm.

Kind of pees me off with Brit kit in that it is hard to pinpoint dates on most kit but i remember doing a trade years back with a Falklands vet which included one of these and i remember him saying how much the squaddies hated the furry ones.
Easy Gee

Nice one Ben, it's good to see a pic of it Mate.

Any chance of a pic of the label, I have an idea this may be one of the later versions ( but then of course as it's MoD it will not be dated

Cool find Mate, and I hope that shop come's up with some more cool items for you

These are the later ones that came out post '85, the earlier ones had more subtle shades of Green and a longer visor. There is two in my local Surplus shope, on the early one, the other the later one. I'll try and get pics to show the difference.
ECW82

I collect these hats and they are a great bit of kit.
You can date kit by using the contract number.
Yes this looks to be the second model.
exwoofer

By the type/colour of the fur I would say this is a later (possibly 90s or later) hat. If it has fur inside instead of quilting its defo a later one.

I was first issued one in the early 80s and contrary to the comments I have seen elsewhere about there lack of popularity - we loved them. They were Gucci kit to Infantry in cold weather. 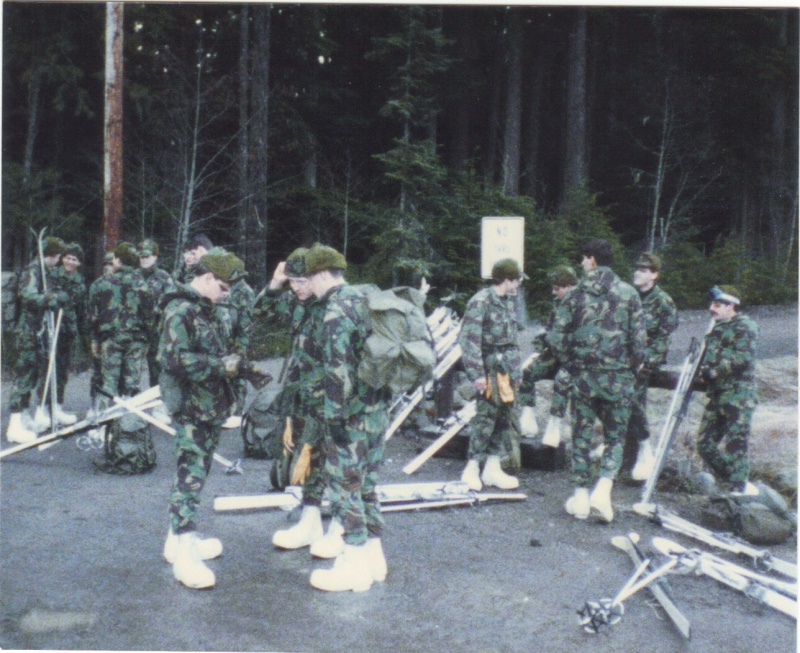 First issue of these hats were hats in an olive cloth - later they were issued in DPM. I have a small collection of original issue ones - in NOS condition.

The pic is of my unit in the Rocky Mountains - USA in 1986 - in our coveted Hats Cold Weather.
ECW82

Here is one of mine.
Second pattern.Short peek full lining. 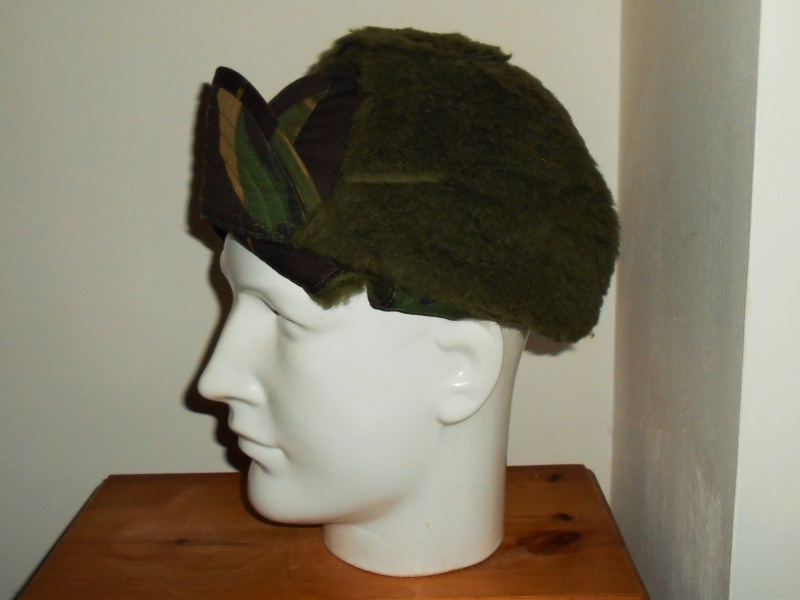 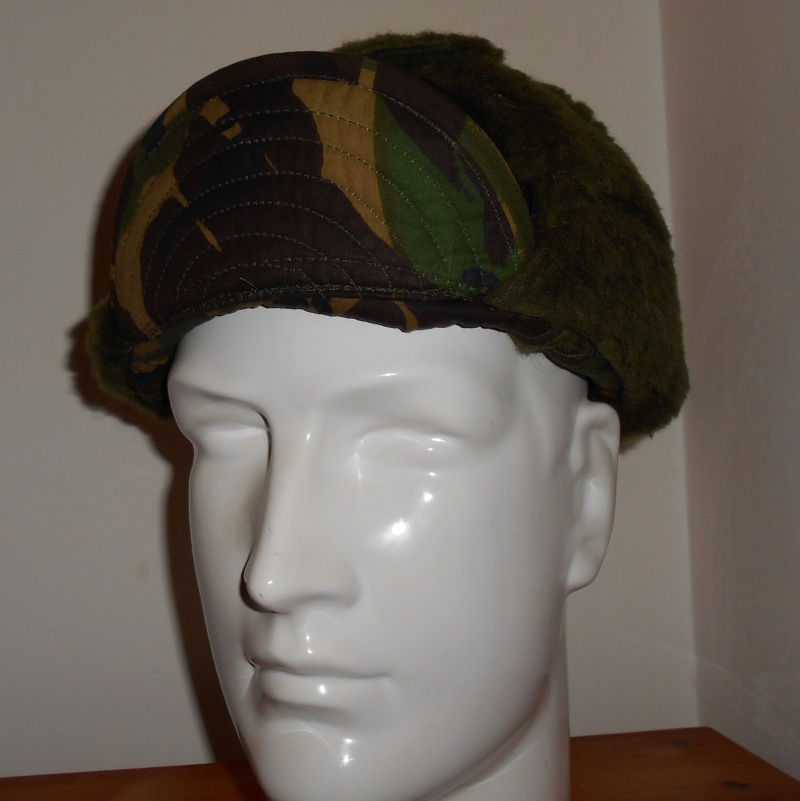 Pattern one in wear.Note the very high peek. 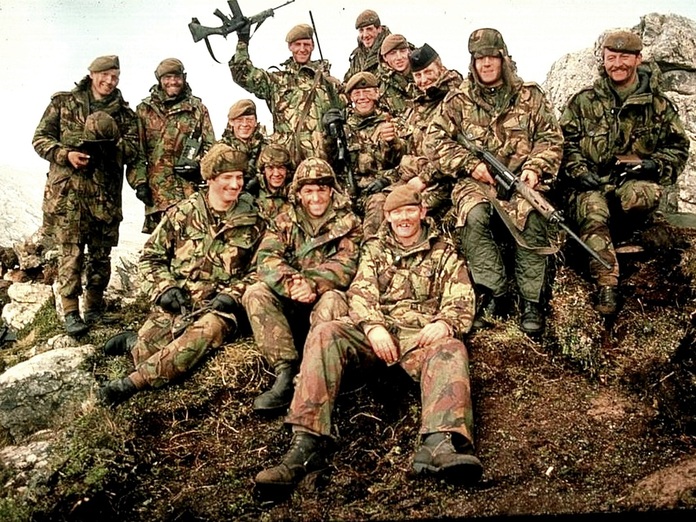 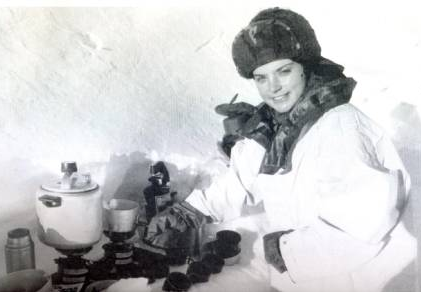 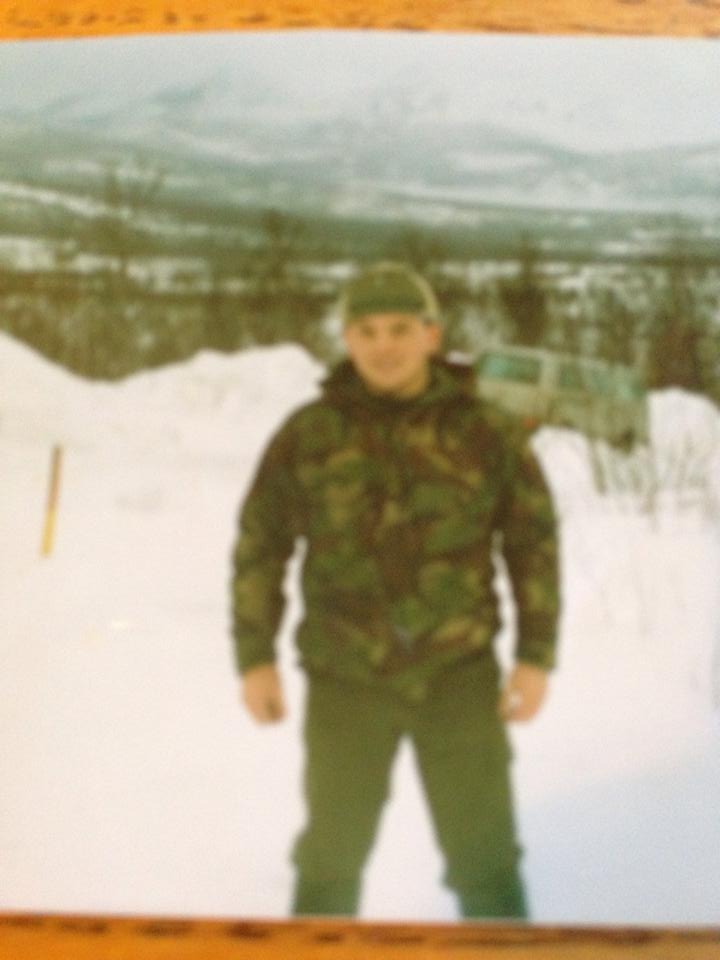 If this works it's a bad picture of me with 45 Commando in Norway in 1990. I used to prefer the green cap with white fleece ear pieces.
sobota

And here is its less itchy MTP Goretex cousin....

Oh wow, I didn't know this design was carried into this generation of kit. That microfleece looks a right bit more comfortable than the old furry pile lining!

Might have to track one of these down just for the novelty.

A useful vid for those unfamiliar with the early/later pattern.

The Korean issue hat in olive was of a different style.

First issues of the Cap Cold Weather (in olive) were at the latest made in 74/75. This was quickly followed by the DPM version - 75/76 (info from official publication).

The Falklands type continued to be issued and were in use throughout most of the 1980's. My whole battalion were issued them a number of times - the last time being 1987 (and these were still the Falklands type). I believe the type with fur inside may have been a very late 80s or possibly early 90s issue.

As most will know the DPM cloth is not 68 pattern - there is no such thing as this. Its just windproof DPM material. The DPM cloth style varies between manufacture's/production (although I understand what he means - earlier/later type material). The cloth is close woven cotton gabardine (in the Falklands type).

The 'wool' is actually acrylic and again the style of this changes slightly between batches/manufacture's.

Info is partly sourced from the document in the pic. 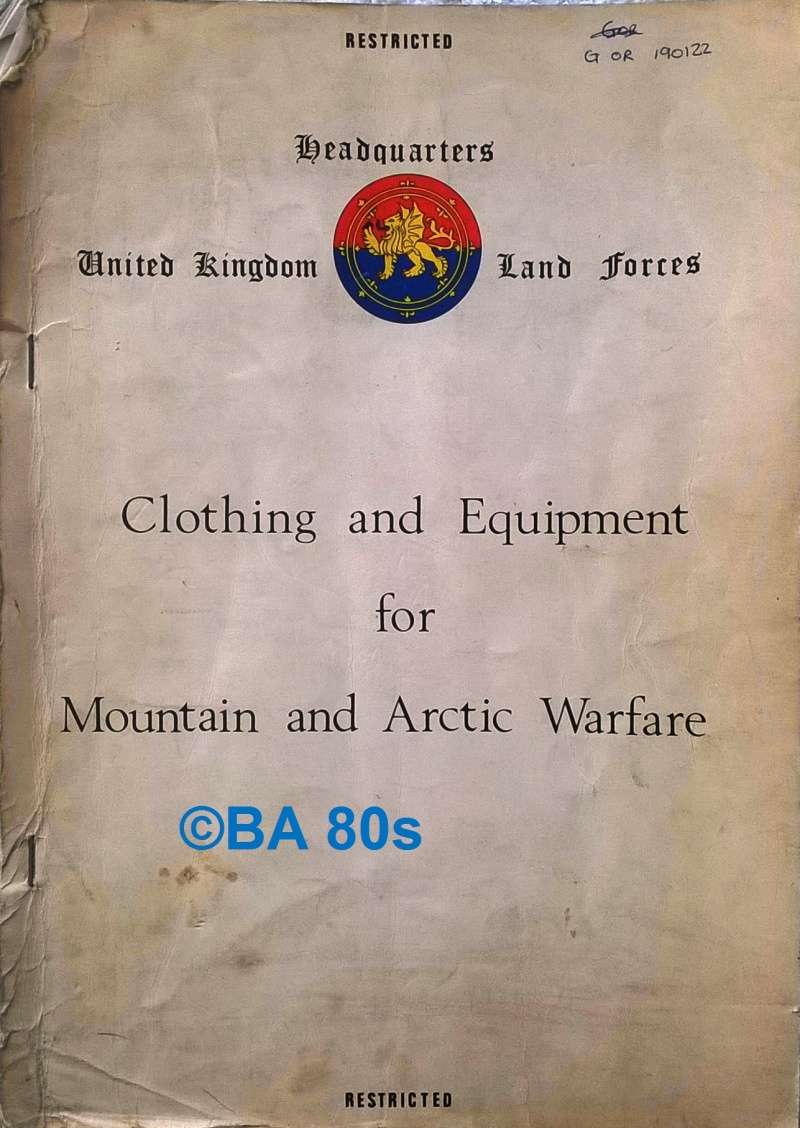 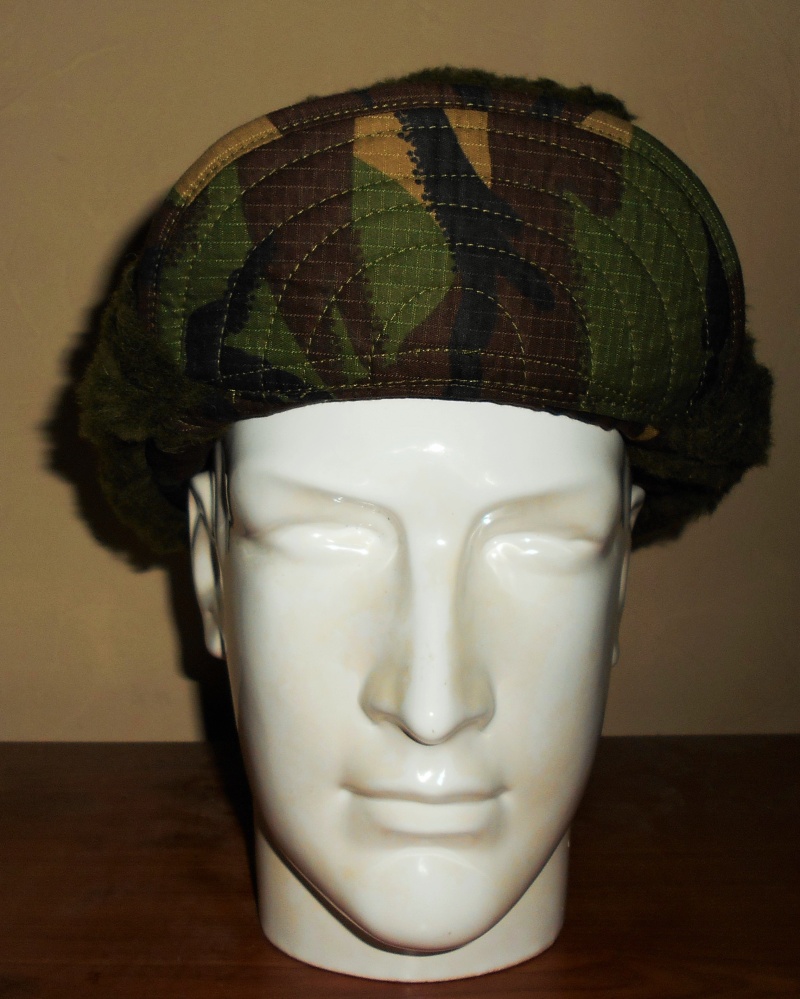 As far as I have the experience, I think this type of faux fur is way more warm than the modern microfleece ones, the faux fur keeps way more air entrapped and so isolates more.
matchstick 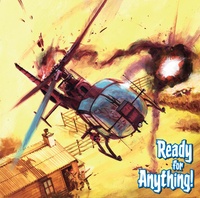 In the latest iteration of the MTP "Deputy Dog" in Gore-Tex exterior they've done away with the fold down Velcro secured ear/chin flaps and the elastic cord (but kept the points for fitting it) giving it an appearance akin to the civi Lowe Alpine mountain cap. I prefer the Mk.1 and Mk.2 versions of the MTP model "Deputy Dog" over this new Mk.3 version, as they both retain the original design of previous patterns (the flaps, and in the case of the pre-MTP Gore-Tex hats, the elastic cord), the Mk.1 like the DPM and DDPM versions having a black fleece liner and the Mk.2 where they changed it to olive which has carried on into the new Mk.3.
Bert353

Do you happen to have a Image from the Mk3 model?
matchstick

Bert353 wrote:Do you happen to have a Image from the Mk3 model?

As I haven't the foggiest how to put pictures in I shall instead use a link to the first thing I could find with illustrations of what I define as the Mk.3 (Current) MTP cold weather hat.