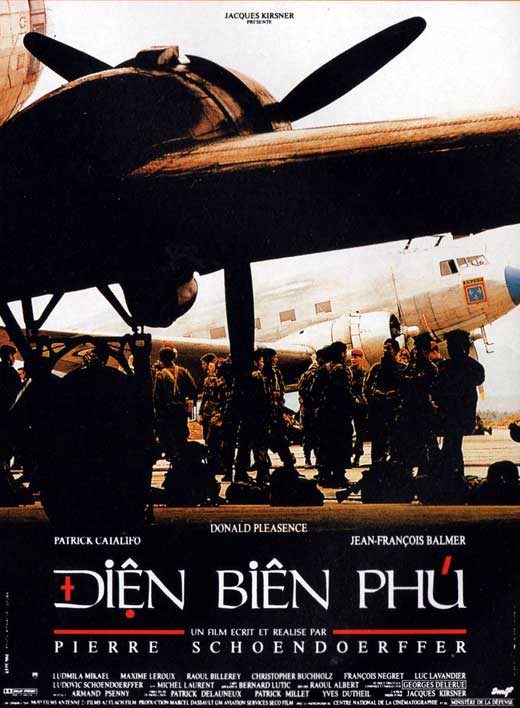 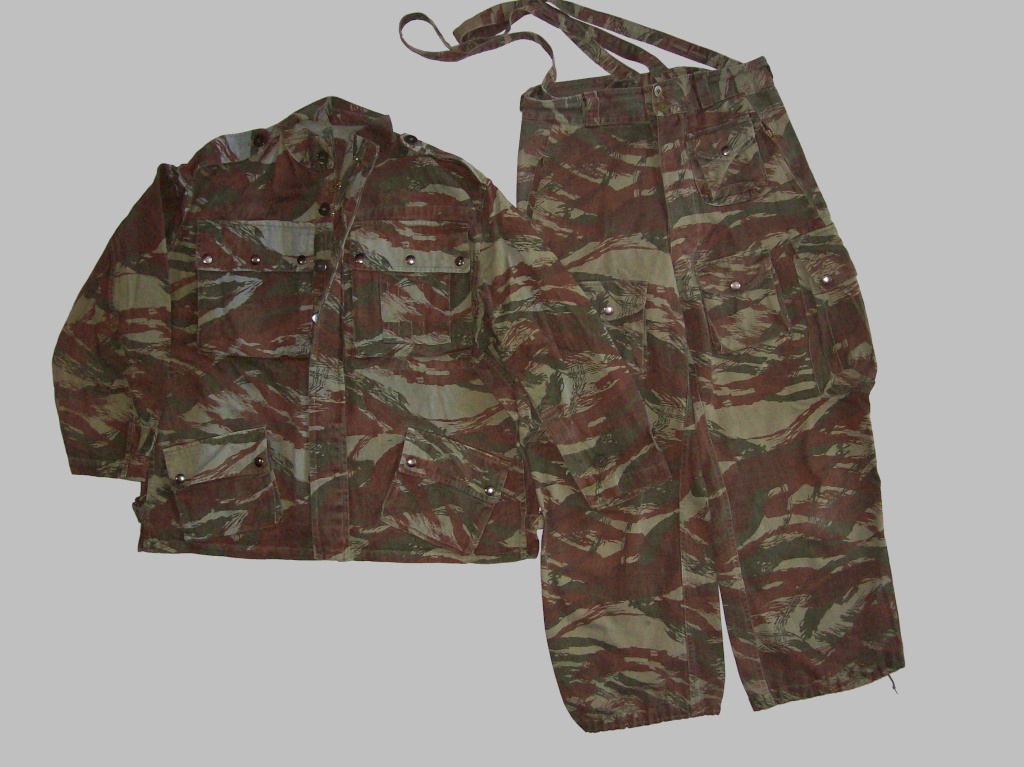 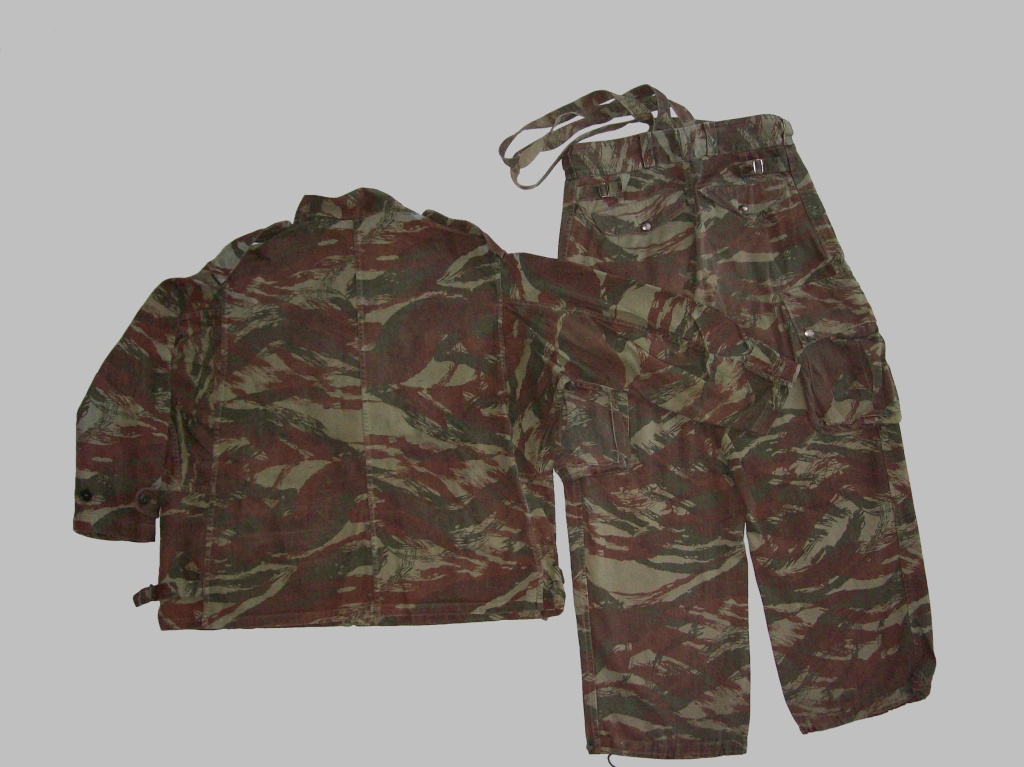 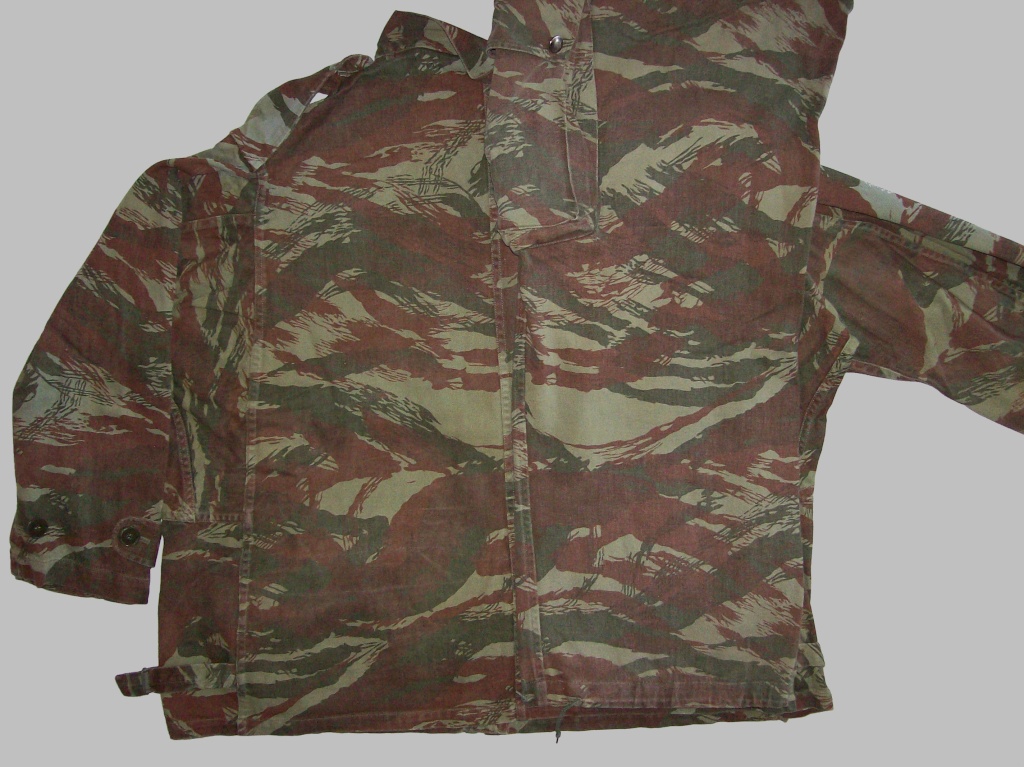 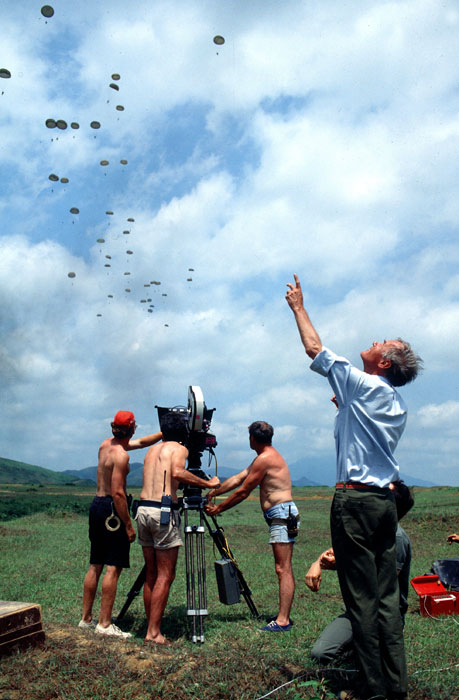 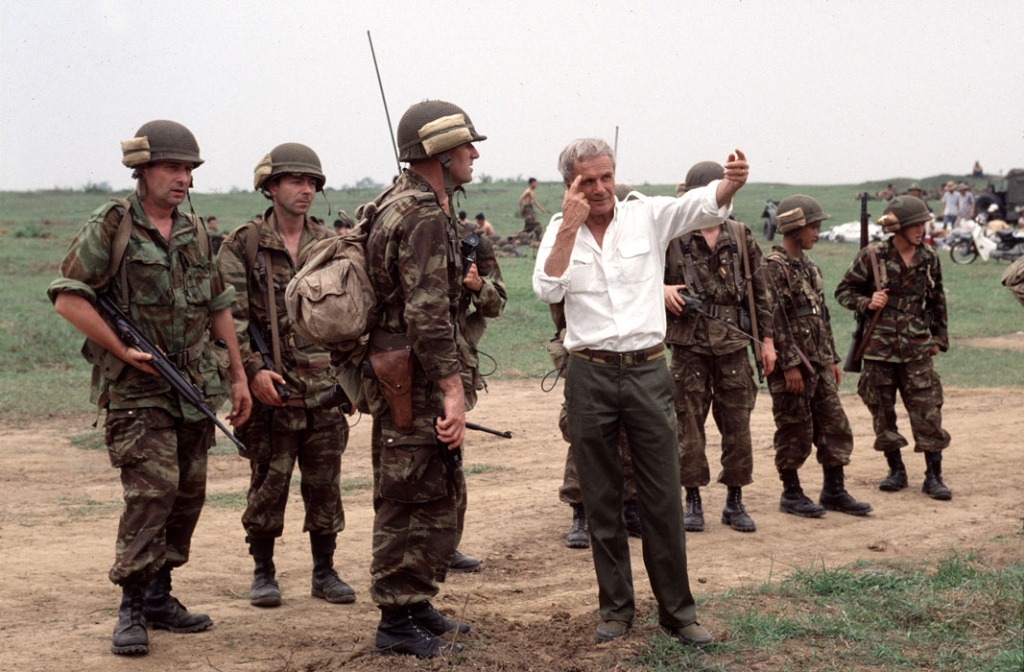 The guy at left have a good TAP56 or TAP54 jacket, The guy at right have a "modèle géneral" jacket 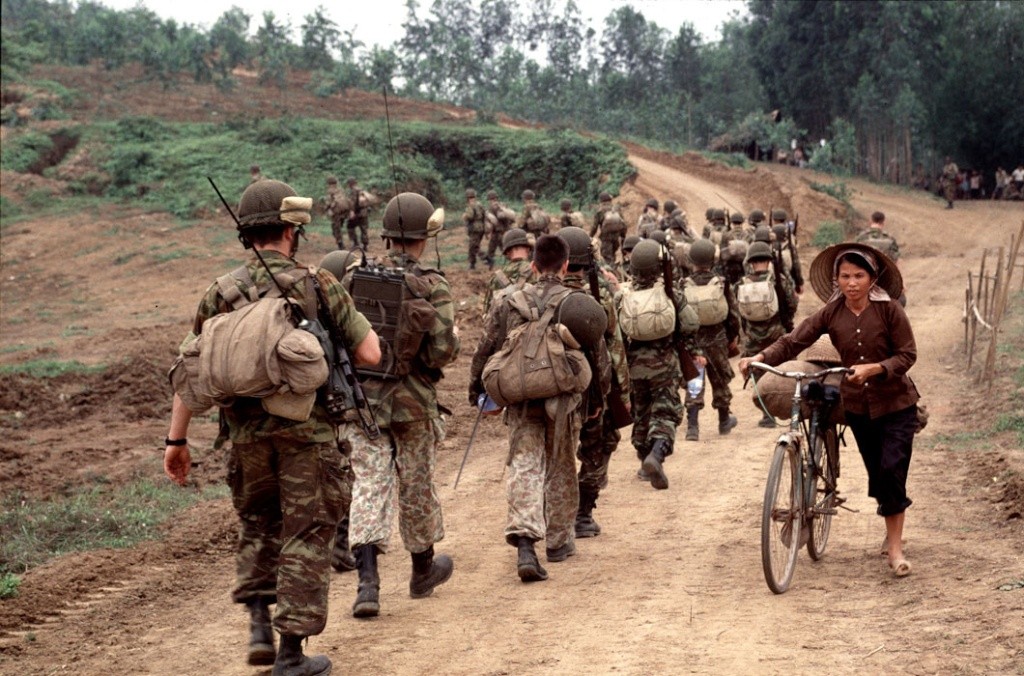 The 2 pants are not duck hunter pattern, they are good old Netherlands pattern, crazy no! 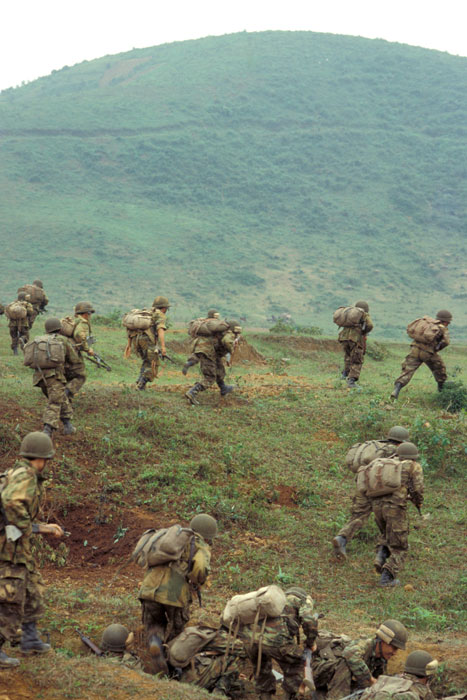 I watched this film whilst on a visit to Belgium many years ago. I enjoyed it although there was not a lot of action. There was however a lot of moody reflection in the French movie style of the time.
filupe

The production values look very good technically, pity the copy I own does not have English subtitles. The director himself was captured at DBP as a combat cameraman, his friend, photographer Jean Peraud jumped from the truck during the exodus to the PW camp and still remains MIA.
zvez

Is it available in subtitles?

Just finished the book Last Valley, that and Hell in a Very Small Place are two great books on the battle.

I once had a TAP 47/56 reproduction that some suggested came from this movie. I sold it a while ago, but here are the pictures. 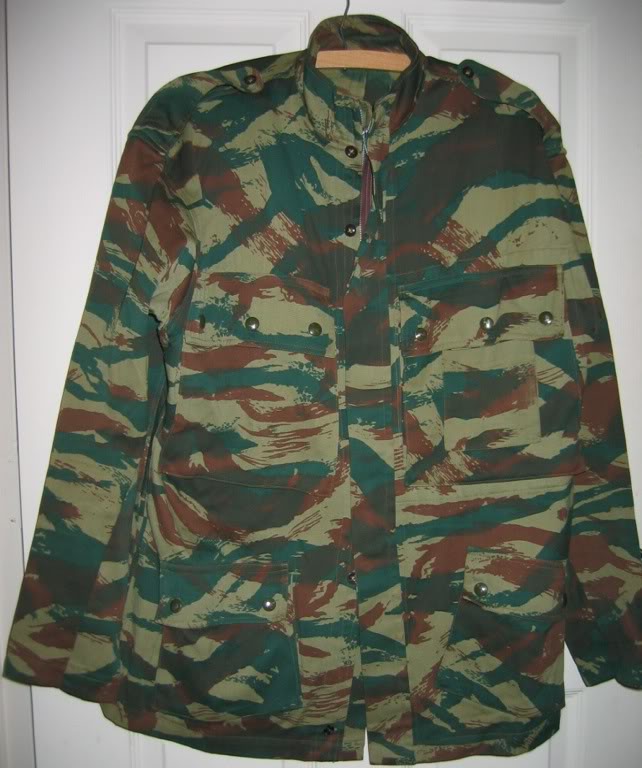 Steve, your set is like the set of Owen
Gilles

I doubt whether they did 47/56 repros for the movie. Looking at the above movie stills it looks like they wear the earlier TAP trousers so IMHO it would stand to reason they would have tried to replicate the earlier smocks as well.

It looks as if Schoendoerffer went to great lengths to try to be technically accurate - pity he didn't have access to any Hellcat or Bearcat fighter-bombers.

I assume the set you show above was made specifically for the DBP movie? Wikipaedia mentions that a companion book was brought out detailing the making of the movie - do you have that?

Hello
I have not the book
A friend have it and I need to borrow it
On the following picture, the arrow point at lesf 2 good French TAP56 ( I think), the third is also French F2 pattern, in right also
All other garment are identical at my set
Gilles 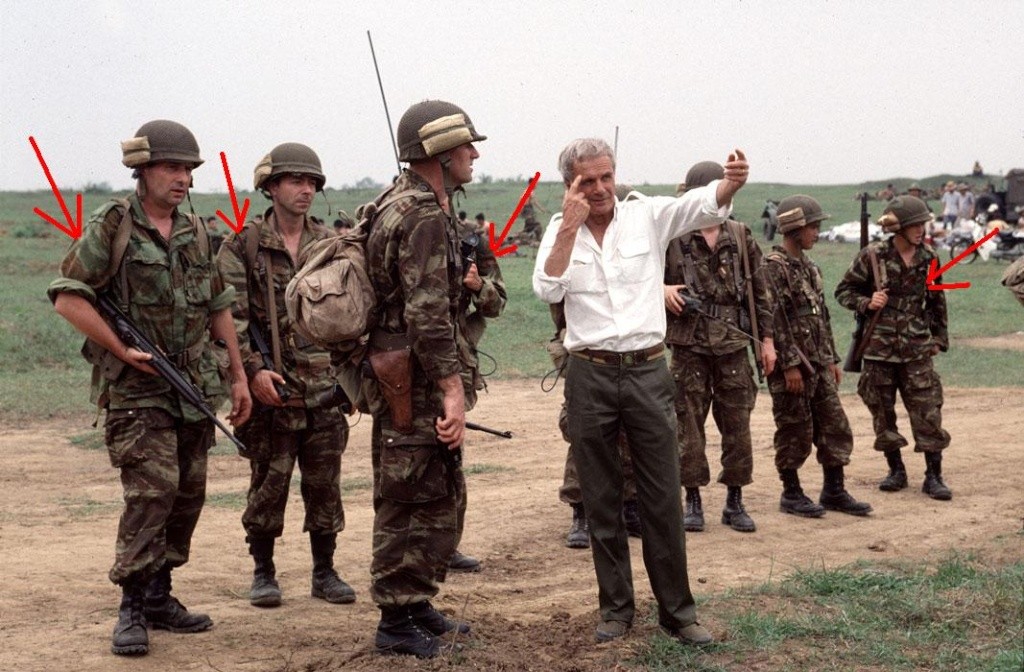 Yes, the set I sold does look like Owen's. I am still suspicious that it is a prop because the interior stitching was crap. Normally a seam is folded onto itself so it is solid and does not fray. IIRC, the seams in these items have the ends of the cloth exposed.

As for the movie using reproduced TAP 47/56 items or not... I can not say. I also have no way of knowing if the uniform I sold was part of that movie. As Gilles points out, the movie does use a mix of items.

That set is VERY similar to my Vietnamese made set ........
I am leaning on exact same.
Can you work your mind on who it came from as mine came from a X SWAT officer who only collected Airborne uniforms.
He died 10 ish years ago and some of his stuff was on ebay many years ago after it was originally sold.

The uniforms in the film are close .......but hopeless , that pattern is wrong , great images though !!!
owen
koalorka

Wow, Steve, that copy would have fooled me! I didn't realize there was such a convincing replica of the TAP56 made. Thanks for posting that.
CollectinSteve

The giveaway feature of that particular set is the internal construction. Very simple seams with exposed edges. Definitely not French military made.

I got that set along with about 400 others when I bought out 1/2 of a collection. The guy who had it probably got it in the late 1980s or early 1990s as that was his most active collecting time. The stuff I got from him varied from über rare originals to cheap commercial knockoffs, though it absolutely tended towards legit stuff. He also had things like Waffen SS smocks in BW Amoeba, possibly from A Bridge Too Far.

His collection of French items was very impressive. Along with the set in question I got two TAP 47 sets (one camo, one OD), TAP 47/52 trousers, TAP 47/53 jacket and trousers, TAP 47/54 jacket, a couple of different TAP 47/56 trousers, and some 47 General items. With the exception of the TAP 47 sets the examples are near mint condition.

Personally, having seen and handled the set in person I do not think this was theater made. It just didn't have the right feel/look to it.

Steve ,
I got 5 ish sets from a guy who got them from an advisor .
He had WW2 US cammo , Tiger ,Black , OD and the one you had.
There were tailor labels on some of the sets both pants and trousers.
I sold 2 of the sets to a fellow collector for 5 grand .

kammo-man wrote:Steve ,
I got 5 ish sets from a guy who got them from an advisor .
He had WW2 US cammo , Tiger ,Black , OD and the one you had.
There were tailor labels on some of the sets both pants and trousers.
I sold 2 of the sets to a fellow collector for 5 grand .

If I'm looking at the right numbers in front of me, I sold the set in question for $154 on eBay in 2007. I was honest about not knowing what it was and that I suspected it was not an original period item. It would suck for me if it was, but I'm not going to suggest something is "tailor made" unless I know it is. There's so much of that crap on eBay I refuse to take part in ascribing "tailored" to anything made out of Tiger or Lizard that can't be readily identified.

Yes it was! The fun thing is the TAP sets weren't even the best things in the collection, though 4th best isn't bad amongst 400 uniforms

CollectinSteve wrote:
Yes it was! The fun thing is the TAP sets weren't even the best things in the collection, though 4th best isn't bad amongst 400 uniforms

Dare I ask what the top 3 were? Will my ego be able to handle this information...?
CollectinSteve

In fact, to the right collector I'd say the 4th best part of the collection was Indonesian, though I think most would be more excited about the French portion.

FYI, I saw a decent TAP 47/53 jacket sell today for about $90. Colors were faded, beaver tail was gone, and there was custom tailoring to make it either smaller or larger.

Yup I nailed it on the tailor made stuff .

you let a great set go .

kammo-man wrote:Yup I nailed it on the tailor made stuff .

you let a great set go .

Unfortunately it appears so

I held onto it for a year or so, trying to find someone that could verify what it was. With so many repros and foreign made sets (with no particular historical significance), I went with the odds and concluded it wasn't worth keeping. I also sold it at a time when eBay buyers weren't as insane as they are now. In fact, I sold a lot of extra TAP stuff for about 1/4 what they are going for now because that was the going rate at the time.

Oh well , what do you think a mint set would go for now .......missing the tail ?
owen
CollectinSteve

Gilles would have a better idea of it's worth. I'm in need of a 47/52 set, but I don't want to part with the kind of cash those things demand. I want it, but not that badly. Now, if you had a set of reversible BGS Splintertarn... well, then I'd call up my banker and see if about another mortgage on my house 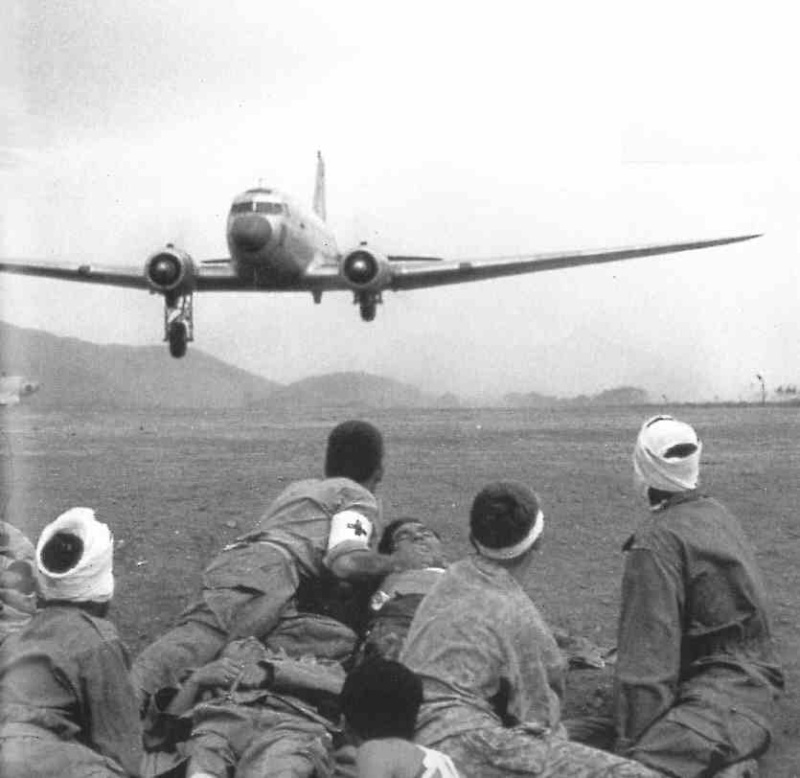 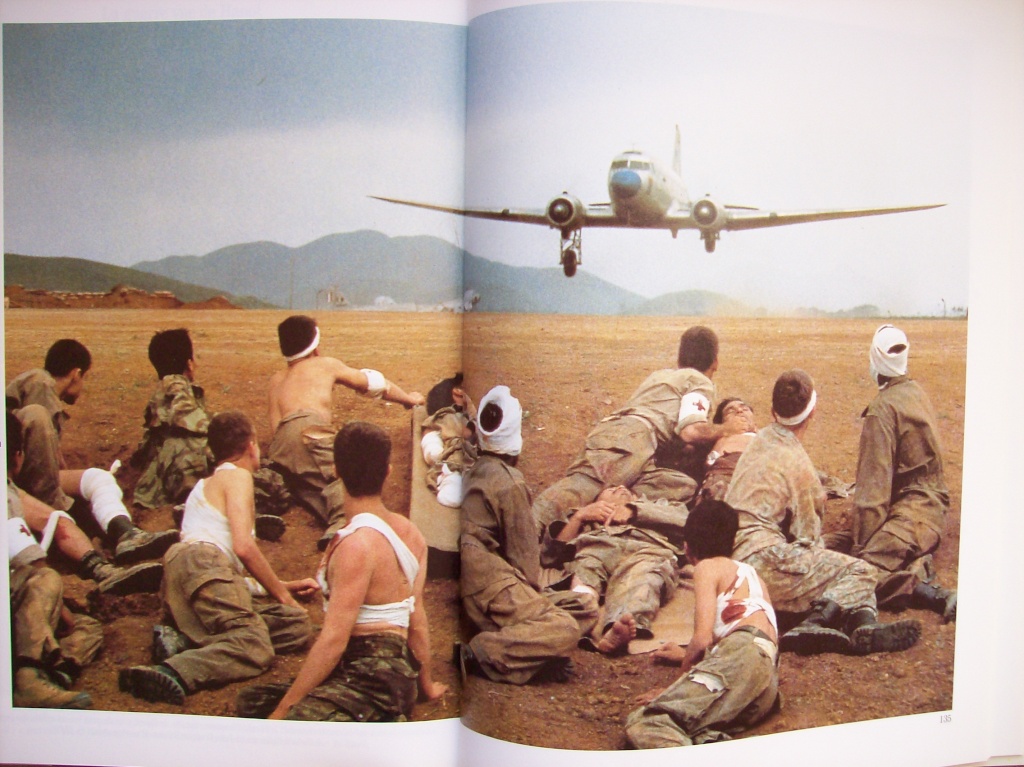 GOsh, I had an original mint unissued set of 47/52 that I got ca 1982 (long before they were faked). And you know I can't even remember selling it, perhaps it's still here........somewhere!
Chris
CollectinSteve

Dig hard for that one! It's not like you'd be digging for a set of Swiss Leibermuster

Gilles, it is bad when a movie can be made to look like a historical photo. Well, at least as a historian. As a movie maker it would be one of the highest complements!