I have several uniforms that I consider Holy Camo Grails, several of which are West German. One of my favorites is this sucker. It was intended to be the Bundeswehr's first combat uniform, but it was dropped from the running before the BW was officially created. Instead, the Splittertarn uniform was adopted using a similar, but much simplified, cut of the uniform. Here's some info I put together about its history:

If I've read the labels correctly the contract was set forth on November 30, 1954 and actually produced in 1955. Presumably early 1955 since the pattern was already dropped in early 1955 in favor of Splittertarn, which apparently was either adopted and/or produced in June of 1955. Therefore, the actual use of the uniform for pre BW trials measured a few months at most.

I've examined the proposed EVG uniform (Europäischen Verteidigungsgemeinschaft) that was being trialed in and around 1953-1954. The EVG was the political/military organization that was designed to combine the armies of Western Europe into one, singular organization. Not only was it to be unified in terms of command and purpose, but it was also supposed to have a common field uniform based on the French TAP 47, probably because the French military was the only significant one on the continent at the time.

The EVG was effectively killed off on August 30, 1954 when France rejected ratification of the agreement (Germany had signed on in 1953). This was supposed to be the path for German rearmament, which was seen as critically important, so there was a scramble to get an alternative in place. This happened in October 1954 when the former EVG members, the US, Canada, and Britain agreed to incorporate Germany into NATO with some preconditions (similar to the ones France had about EVG). Germany officially ratified its membership in May 1955 (a 1957 source says March, but I've not reconciled the discrepancy).

The Leibermuster jacket is extremely similar to the EVG jacket, the trousers a tad less so. With the failure of the EVG it looks like Germany made a few minor modifications and had an experimental run made in Belgium, anticipating the actual creation of the Bundeswehr by a few months. The probable reasons why they went with the EVG pattern are simple; they were familiar with it and had nothing else to go with. What they probably did was incorporate some modifications from feedback from EVG trials (move a snap here, remove a tie there, etc.). Whatever the case may be, the fact is that the Leibermuster uniform is almost identical to the EVG uniform. The camouflage pattern must have been chosen quickly as well. Since almost nobody knew of this pattern, there was no way to associate it with the Waffen SS or Heer of WWII. It also came with the benefit of cutting the R&D time for pattern down to near zero. They might have even had access to the original screens, which again would have been a big benefit to them. I do, however, think they modified at least the black screen. Technically this would be the easiest of the screens to modify since it did not need to be lined up with the other colors. Modifying the dots would have required changes to three other screens, for example.

One explanation for why the uniforms were made in Belgium is that Germany was not legally allowed to create the uniforms yet. Technically they were not supposed to have an armed force other than the specifically authorized BGS and Polizei forces. Another explanation, possibly in addition to the previous one, is that Belgium got the business as part of war reparations. Germany produced poncho/shelters for Belgium in 1955, so there is a history of cross border cooperation during this period. My theory about the ABL mark on the tags is the company making them didn't want to retool their tags for an experimental run for a military that did not yet exist (i.e. there was no Bundeswehr tag format since there was no Bundeswehr yet).

So that's about all the info I've managed to dig up on this awesome bit of kit. And without further ado... the pics! 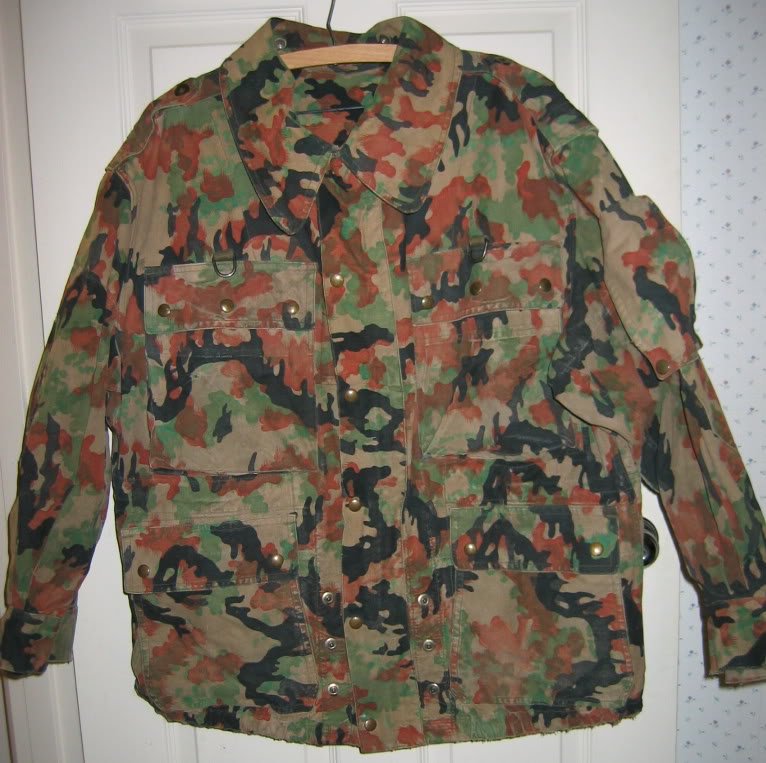 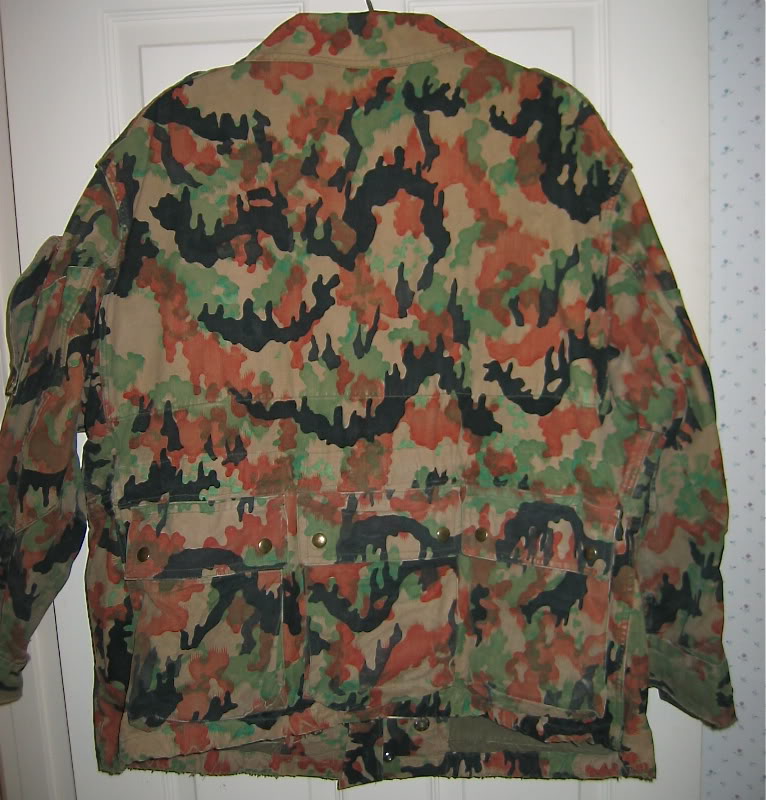 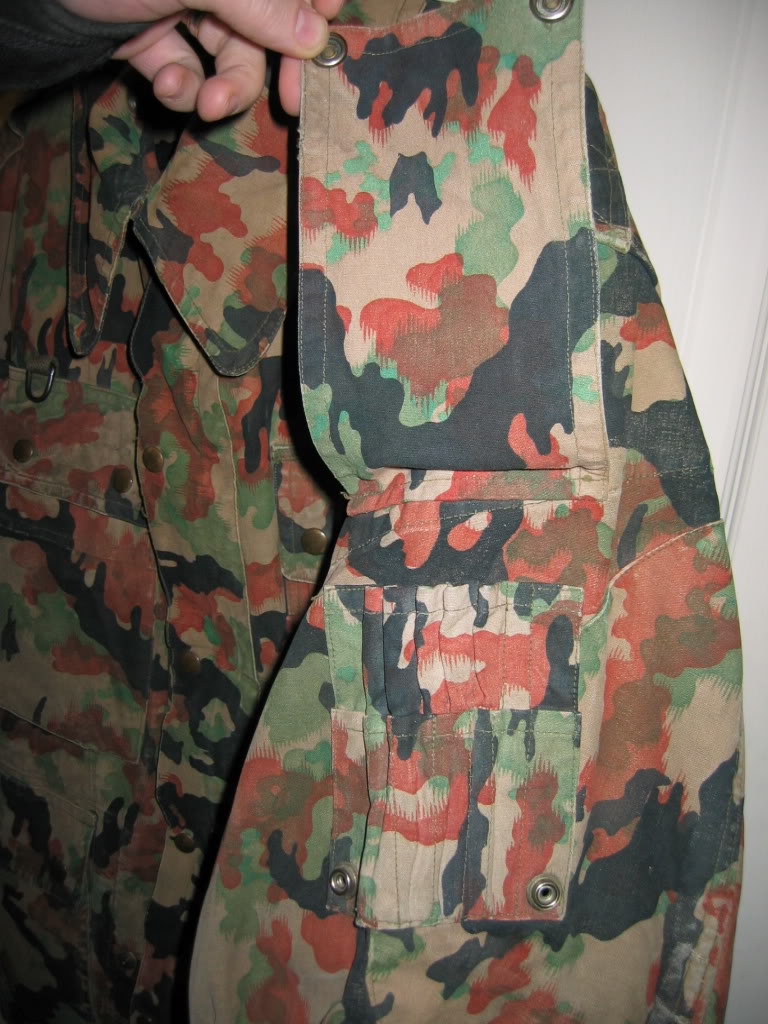 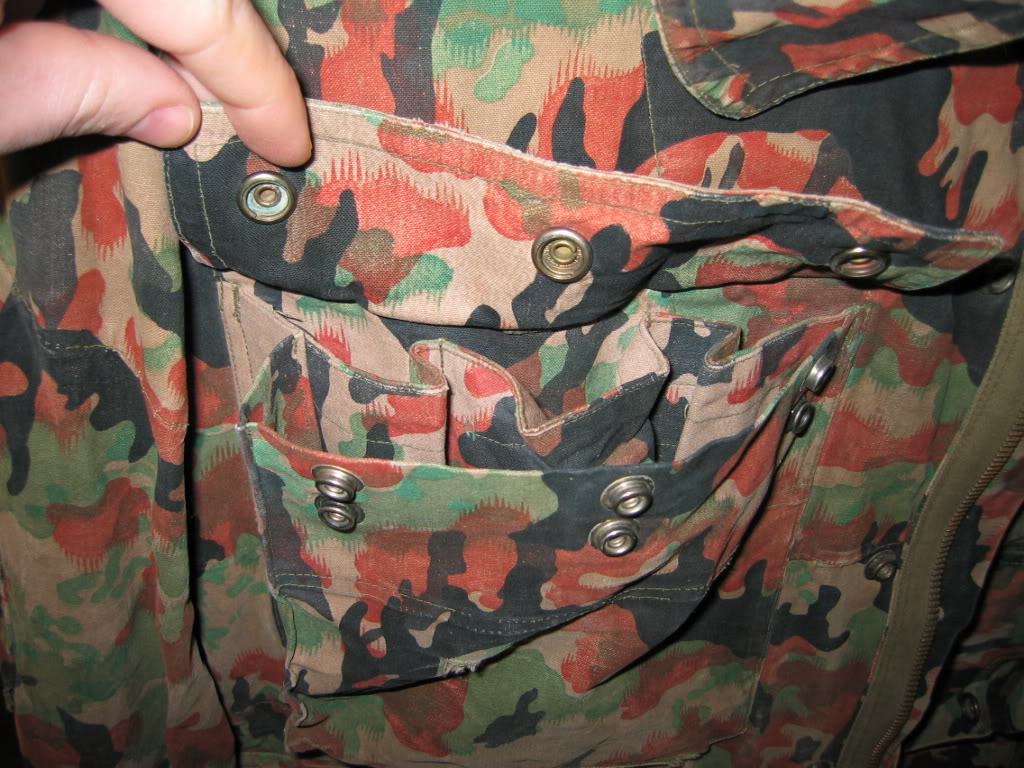 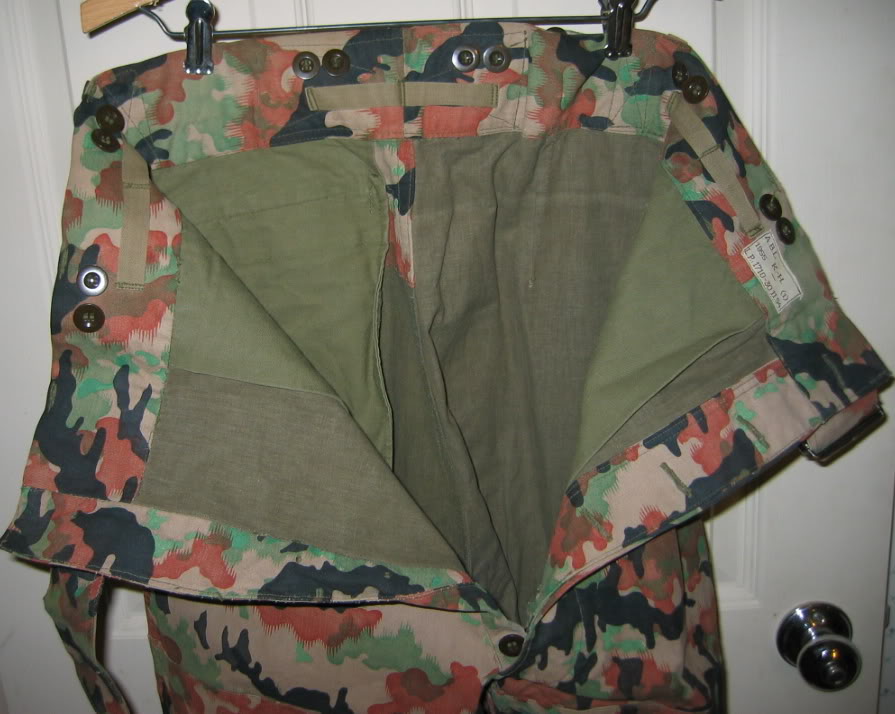 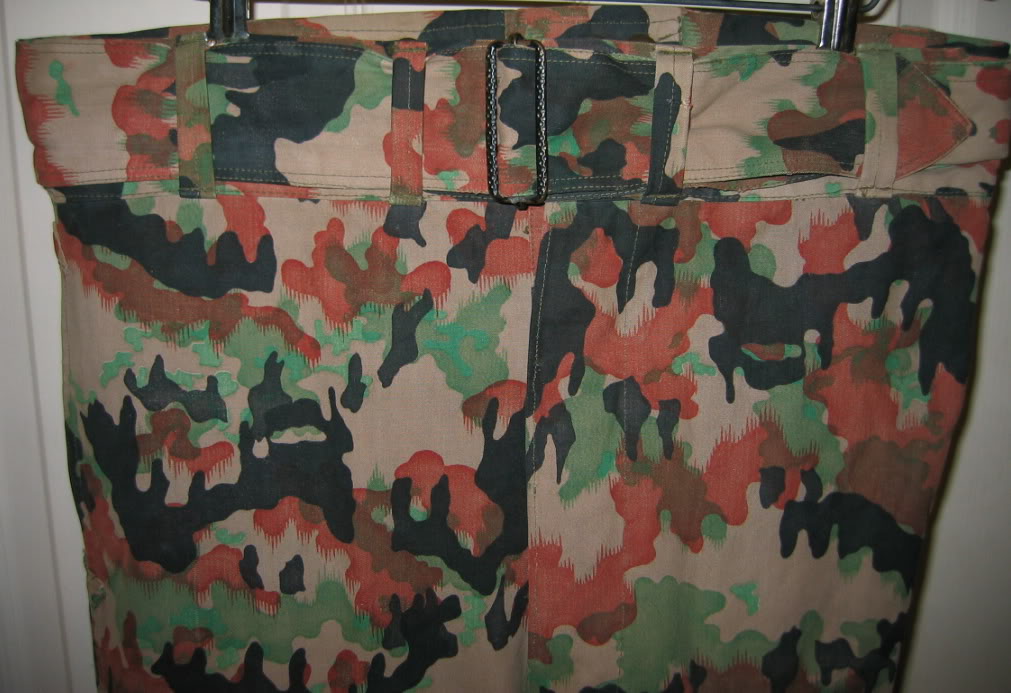 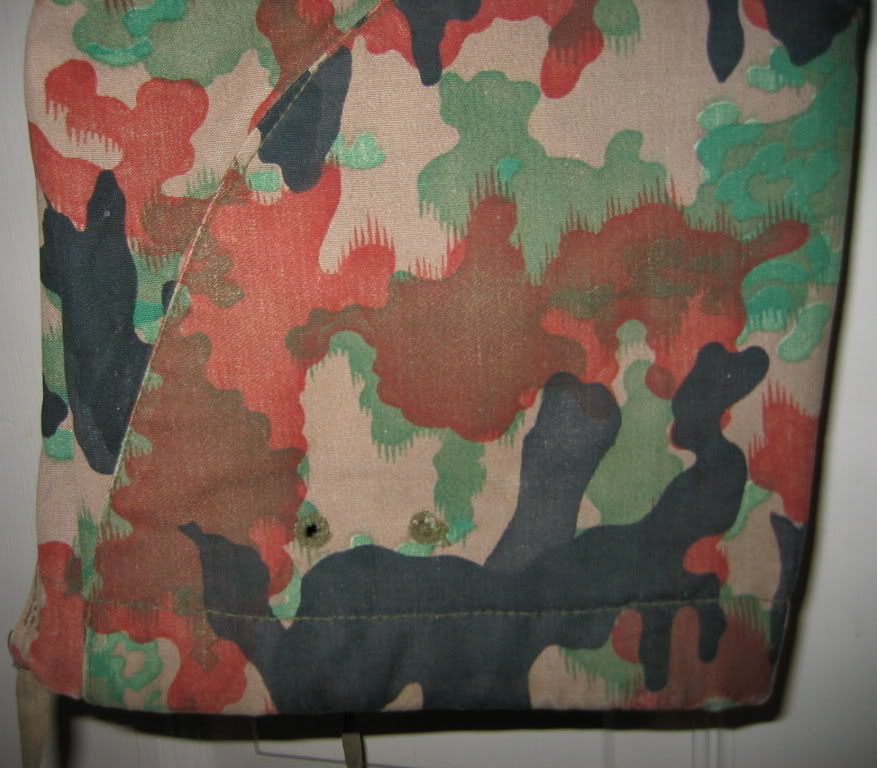 wow...I thought I was in Switzerland for a moment....

The interesting thing, which I can't figure out for the life of me, is that the Swiss basically adopted the EVG uniform. So did the Spanish, yet neither were part of the EVG or early NATO planning at all. Especially Switzerland.

The defining characteristics of the EVG uniform are as follows:

2. Snaps instead of buttons. Snaps were quite a rarity on military uniforms up until this point. Not only did the uniform use snaps, but the size of the snap is a standard that is found on all the ESV derived uniforms and is a standard size found at clothing material shops today.

4. Zipper front with snap flap. Again, zippers were an uncommon item for military uniforms prior to this period.

Some other elements that are found on some:

1. D-Rings on the chest pockets.

2. Rear pockets on the jacket.

3. Crotch flap of some sort.

All of these uniforms were made from thin canvas, triple or double snapped lower pockets, detachable hood, and zipper/flap front. The German Leibermuster, Swiss, and the Spanish 1st had rear pockets. The German Leibermuster, German Para variants, and Spanish 1st and 2nd Model Para variants had zippers instead of chest pockets, while the others all had triple snap upper pockets. Well, except for Belgian Jigsaw 58 which had basically swapped out most of the snaps for buttons.

The interesting thing is that apparently everybody dropped the canvas material before 1960 except for the Spanish (maybe the Swiss... I'd have to check on that). It was dropped because it was loud, hot, and uncomfortable. The Germans complained about the cost, but I'm not sure if that was specific to the fabric or the uniform as a whole. In any case, the Spanish were the only ones to continue using this cloth well into the 1970s. In fact, their 3rd and final Para model was a near identical copy of French 47/56. I don't know what date that uniform went into production but it was quite late.

It reminded me of Third Reich's camo pattern at late war.

It reminded me of Third Reich's camo pattern at late war.

That's because it is

I don't have a piece of the WW2 production (I'm not rich and lucky, just lucky sometimes

) to compare against, however looking at pictures it appears that the experimental post-war version used the WW2 print rollers. Except for the black. The shapes are a little different on that one from what I can tell.

The Swiss pattern is based on the German WW2 pattern as well, but it is definitely not the same.

All Leibermuster patterns have one innovation that has rarely been used by other patterns. And that is the black roller is of a different diameter than the rollers used for the other colors. What this means is that the black shapes are never in the same exact place. The benefit of this is you can guarantee that the pattern is never 100% repetitive, unlike other patterns which (eventually) repeat exactly.

Hi Steve - that's a fantastic find, and a nice piece of research too. Are you sure though that the original WWII pattern didn't have black in it? I've always been under the impression that it did - in fact, I have a copy of the US Army's "Richardson Report" and I'm pretty sure it says in there that the pattern incorporated black (to defeat the emerging infra-red night vision systems).
panzerwerk

he is not saying it did not have the Black , just they were of different shapes , at least that is what I got out of it .
maple-leaf

Ooops, my bad. Yes, just re-read it and that does appear to be what he's saying!
CollectinSteve

Well, you're both right

As far as I can tell the WW2 type had a single black roller printing in solid black. The BW Leibermuster has two black roller printings, one of which is solid black and the other is partially screened so that a bit of a transparent effect happens. This can be seen quite easily if you look at the back of my jacket and the last picture which details the lower leg cuff. This is the same thing done on Amoebatarn.

That's a great find Steve! I hate you

Relatively new information indicates that these uniforms probably were originally intended for Belgian Army use, but were rejected. The BW grabbed them, probably just for initial photo ops and field evaluations. This explains why the labels have the Belgian Armed Forces acceptance mark in them (ABL) and never any with German marks. For a long time this oddity was never adequately explained. Now I believe it has been.

I have one of these jackets (no trousers) that I got back in the early 80's. A friend of mine traded for it at a local gun show back in the late-70's, thinking it was WWII Leibermuster. Later, he found out it wasn't so I ended up with it in a trade. I used it for deer hunting for several years. All those pockets came in handy.
For some reason I just hung on to it and it has been in my closet for the last 3 decades. Good thing I did I guess because apparently they are rare.
I will post some pictures of mine later.

I found recently one of these trousers on a local flea market. I thought it was sort of french para trousers, obviously I was wrong...
Jozef 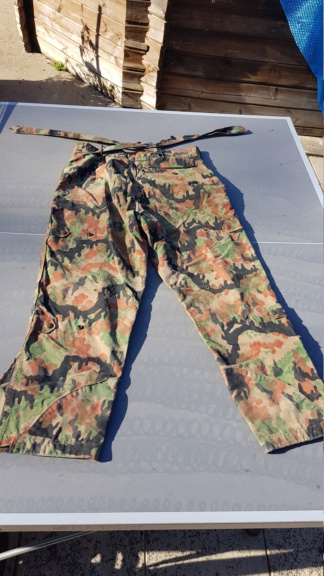