This was a post prepared for another forum but I thought it would be just as appropriate here:

As part of Phase 2B of the Land 125 Soldier Combat System Program, development of Individual Combat Load Carriage Equipment (ICLCE) commenced to find a better solution to the age-old problem of enabling the individual soldier to carry what he needs into the battlefield without burdening him to the point of being detrimental to combat effectiveness.

In deference to soldiers traditional penchant for customising personal webbing the new ICLCE goes to new lengths in providing a platform by which different pouches can be affixed onto the vest in a variety of configurations.

Trials in Timor-LEste were conducted with regular infantry units being issued with an experimental set of webbing vest, colloqially coined zip-loc webbing as pouches were often affixed to the vest using cable-ties (in reality there was a packet of green plastic threaded washers available for this task but they were seldom issued with the vests). Although the units issued with the vest liked the modularity of the system, the material construction of the equipment did not lend itself to the rigours of operational demand and the webbing system was soon withdrawn from regular battalions and re-issued instead to certain reserve units.

The Land 125 ICLCE was designed not only to improve on the zip-loc webbing but also incorporate features from parallel webbing developments occuring in other countries. Consequently, the ICLCE adopted the interlocking webbing tape fastening system first utilised by the MOLLE webbing system developed for the US Marines. The material construction has also been improved resulting in greater durability in operational, particularly sub-tropical areas.

Reports are that the webbing is popular with the end-users. Heat retention issues are moot as the system is worn over a ballistic vest anyway. Current issue ballistic vests now also feature the MOLLE latticework to allow affixing ICLCE pouches directly onto the vest itself. 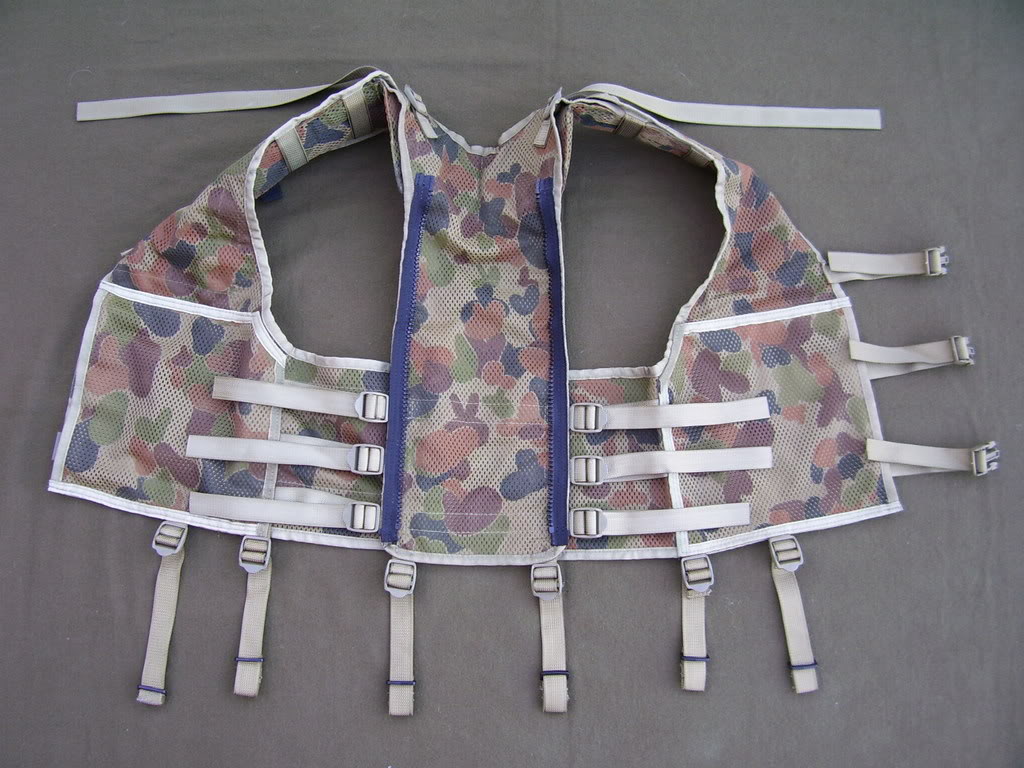 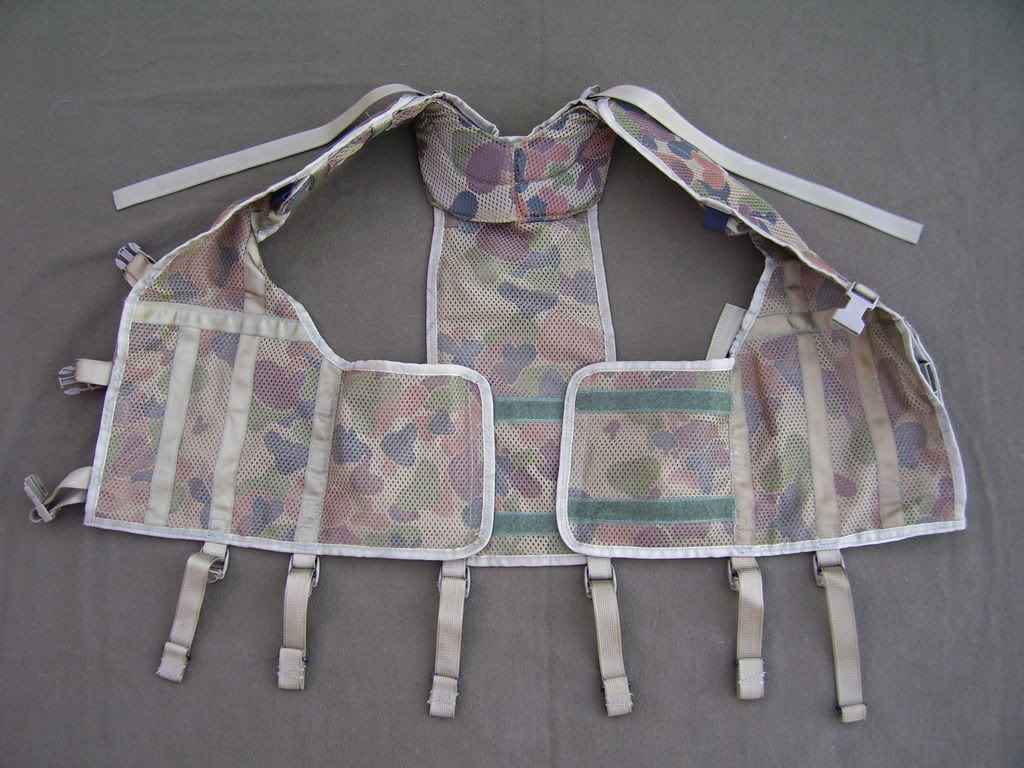 Interior of 'zip-loc' vest. Note belt loops to anchor the vest to a pistol belt if required. 2 zippered internal map pockets are also present in webbing reinforced side panels. 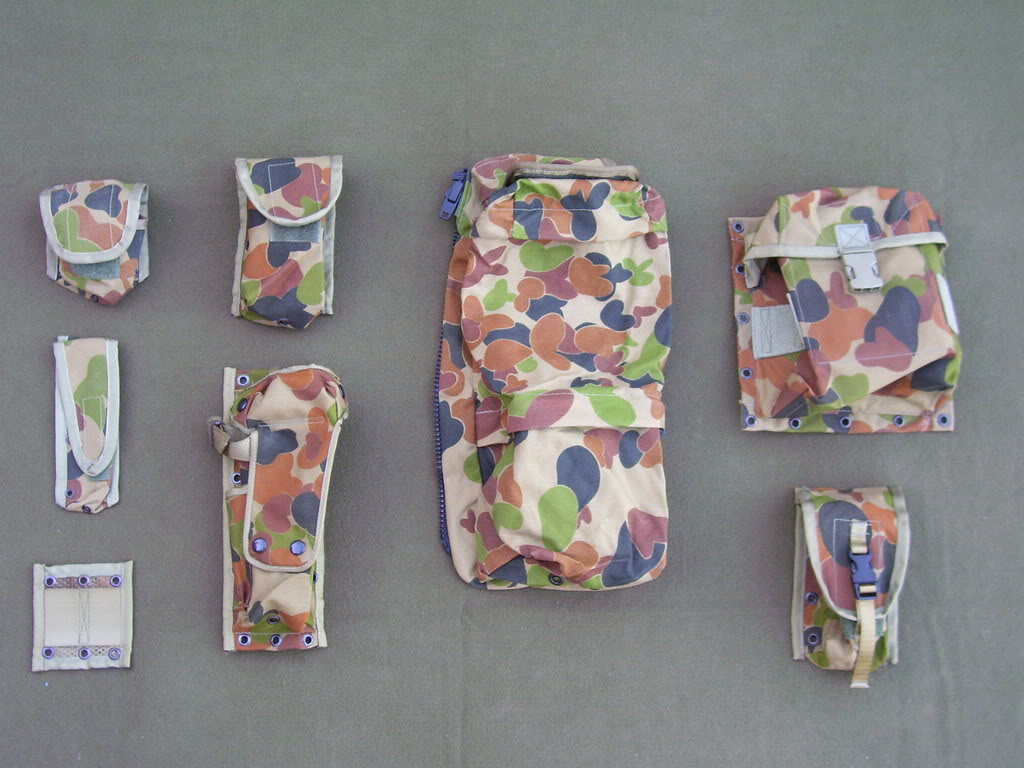 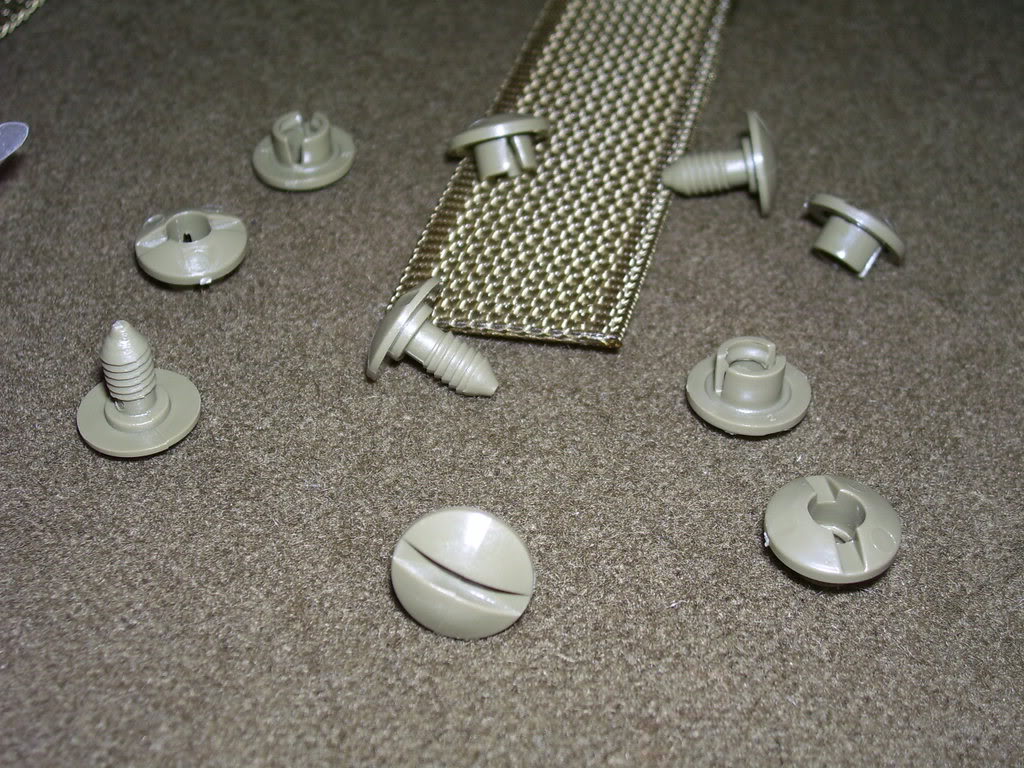 Plastic threaded fasteners designed to affix the pouches to the vest via eyelets. 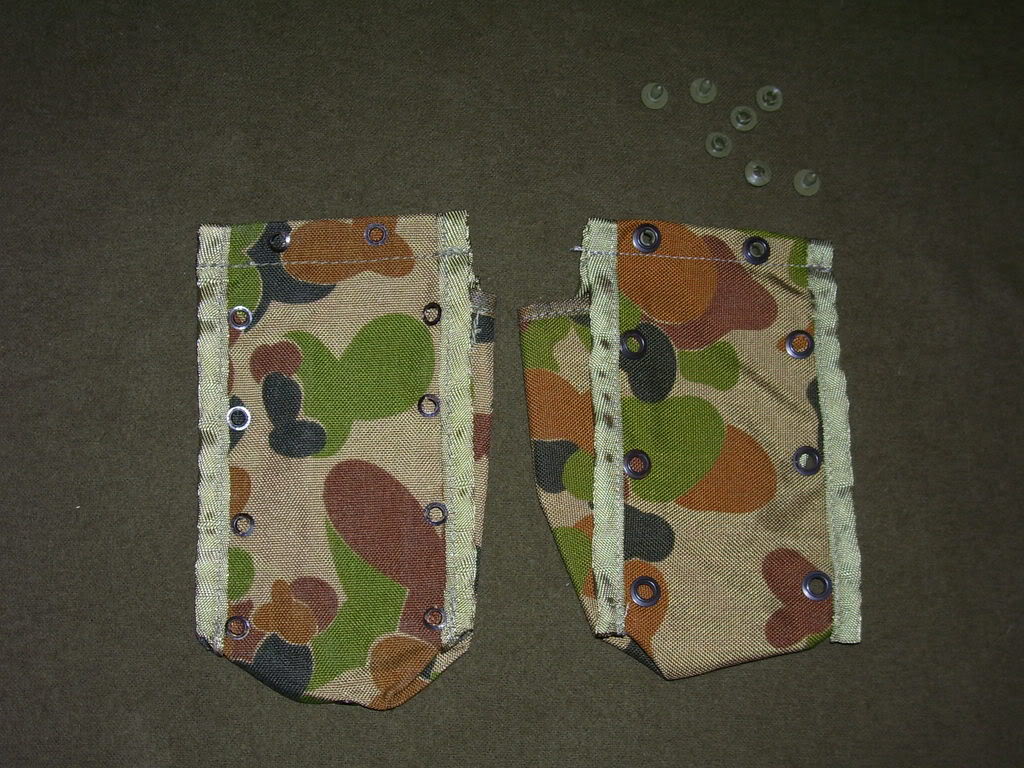 Some trial items were made with smaller eyelets which would not fit the plastic fasteners - one could conclude that they were originally designed initially with cables ties in mind. 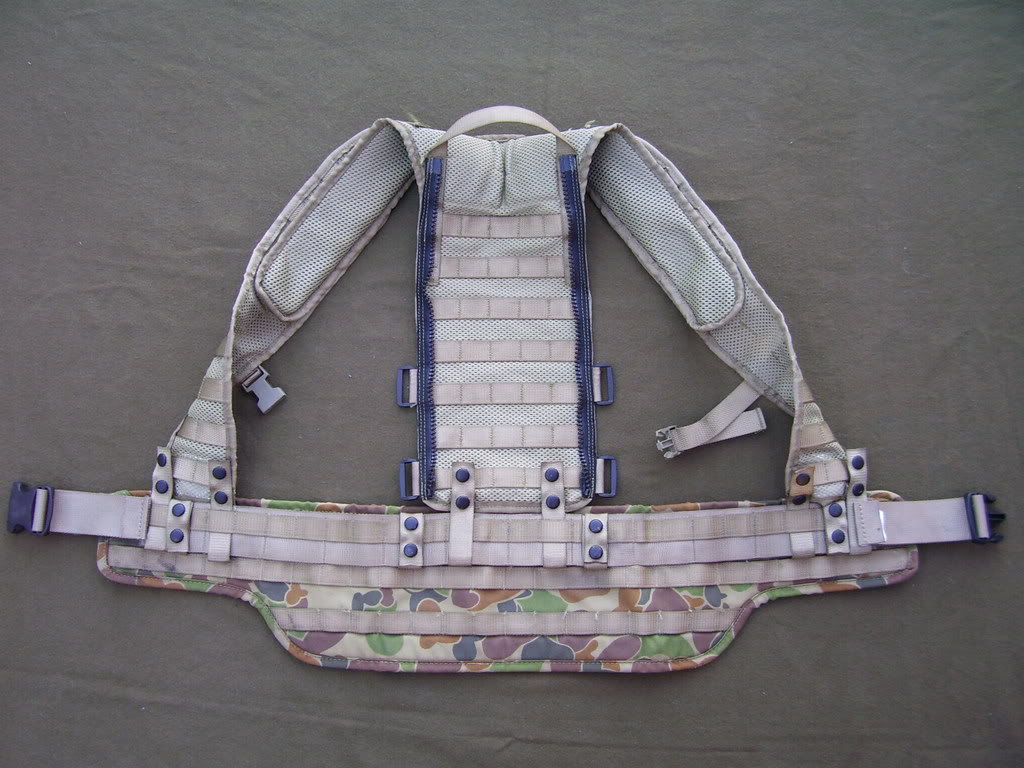 Land 125 ICLCE shown in the webbing configuration where the majority of pouches would be along the belt as per traditional webbing systems. Note the twin zippers for the zip-on daysack/Camelback carrier which can also be zippered to the side of the ALICE type Large Pack when in Marching Order. 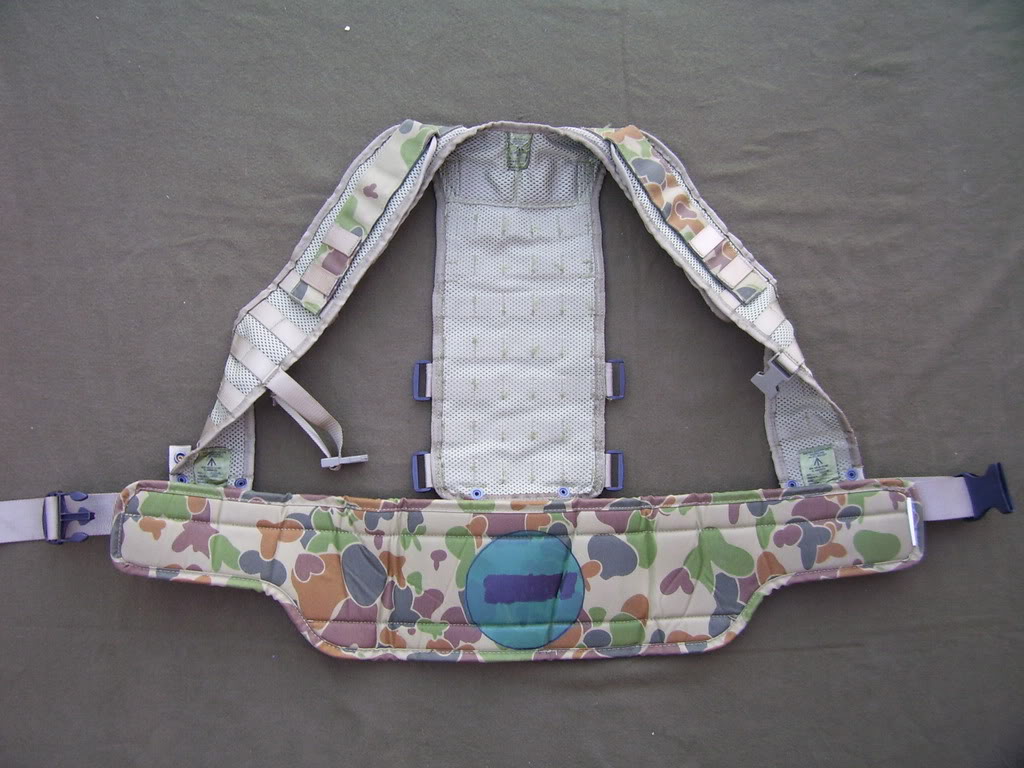 Reverse side of the webbing configuration showing the deepened belt comforter which previously was a popular soldier modification. Both sides of the main Fastex belt buckle are adjustable and the belt can also accommodate the slide keepers of the traditional webbing system. The blue/green round tactical symbol indicates that this webbing was issued as part of Operation Anode Australias peacekeeping effort in the Solomon Islands. 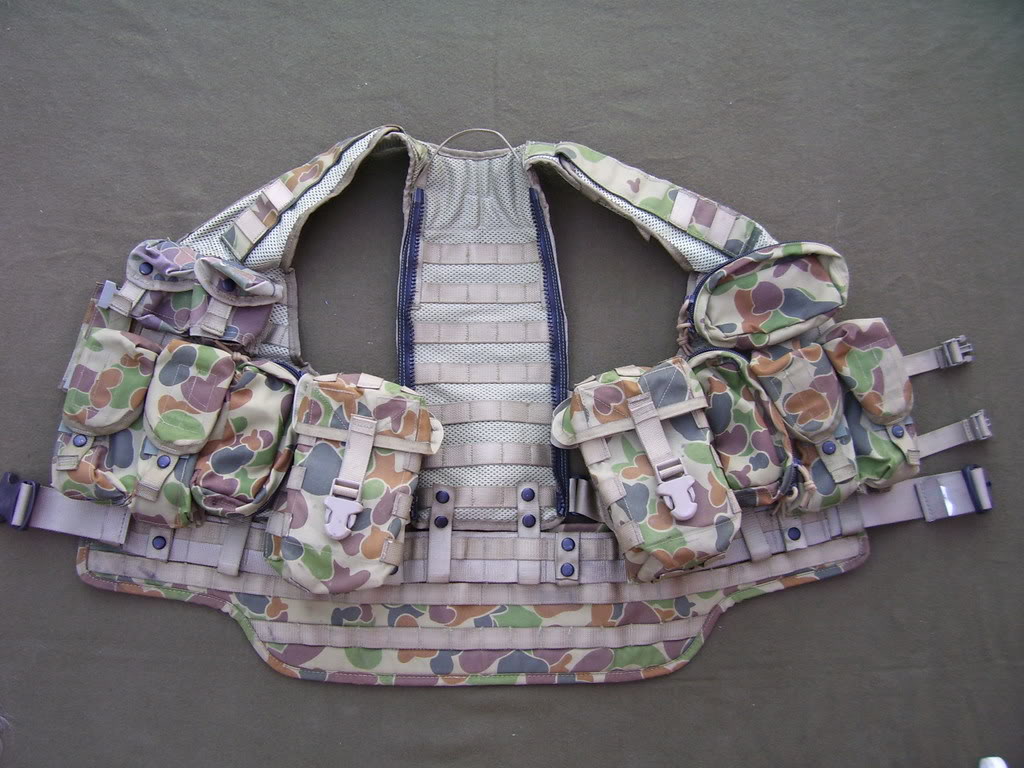 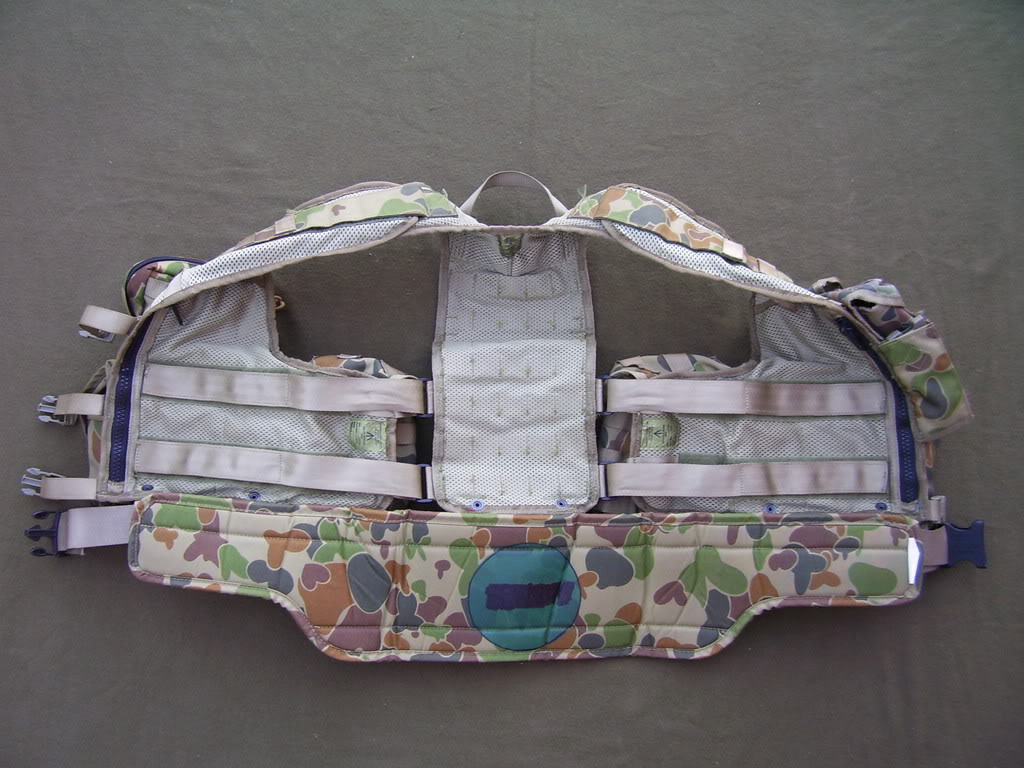 Reverse side of Assault Vest configuration. This view shows to advantage the Velcro size adjustment straps and the zippers for the internal map pockets. Note also the front of the vest closes with three fastexed straps in addition to the main belt buckle. The belt and belt comforter can be jettisoned, leaving the assault vest as a stand-alone. 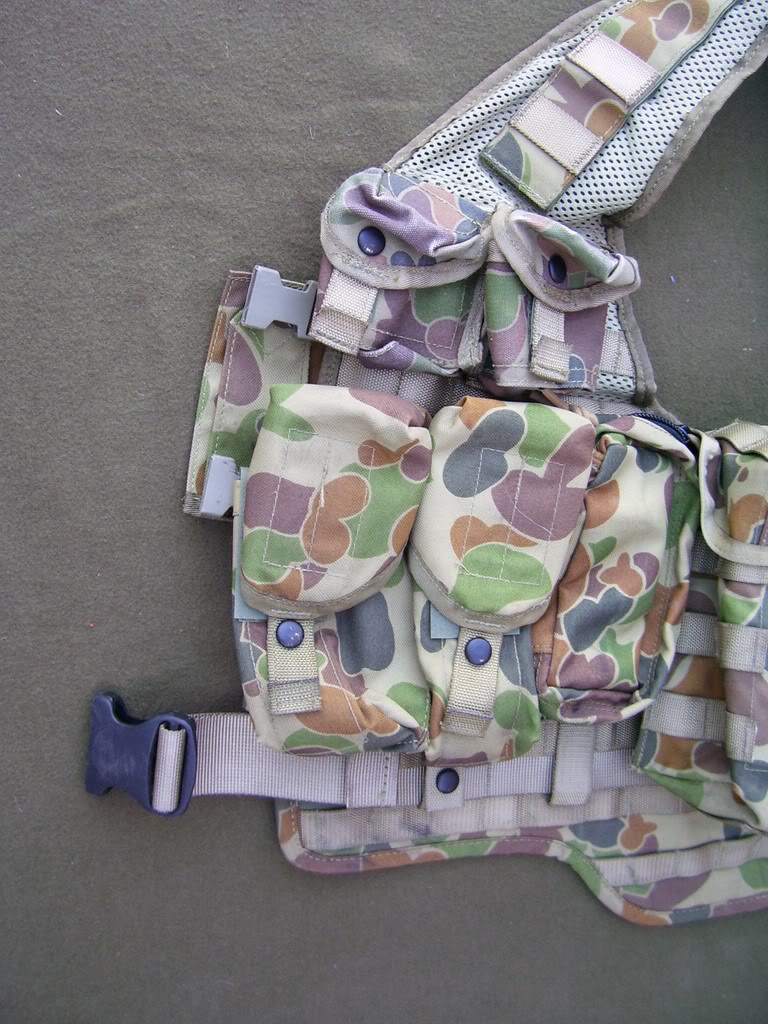 Detail showing pouches and front fastening straps. Note rank slide tab which would still remain mostly obscured when the vest is being worn. 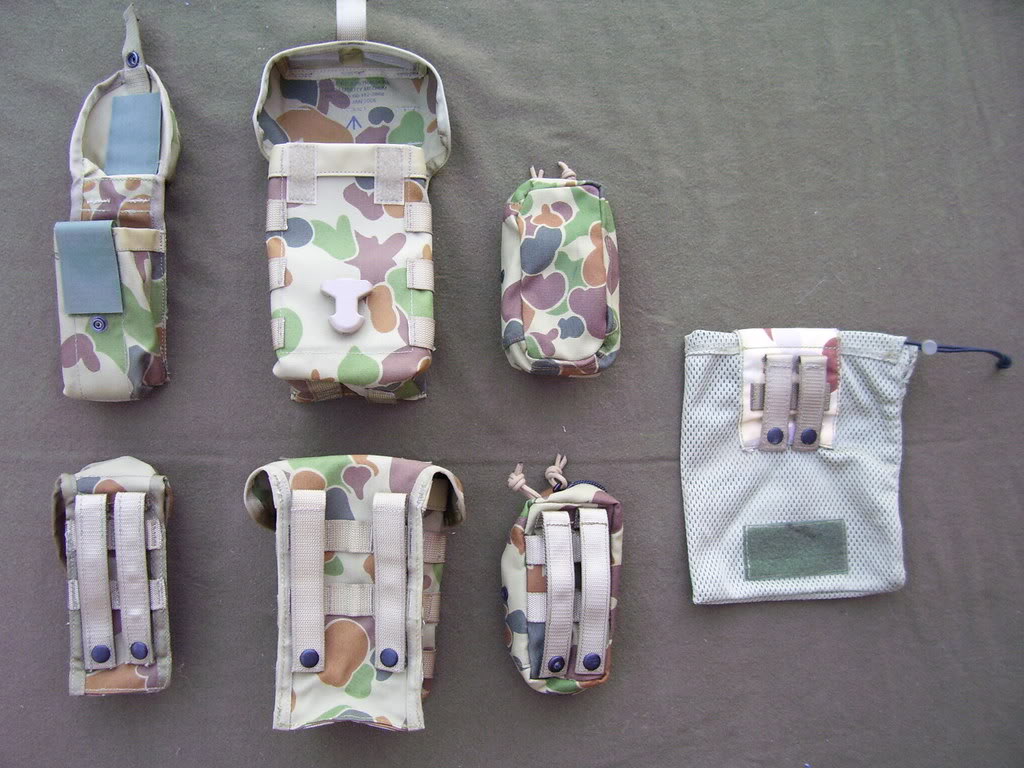 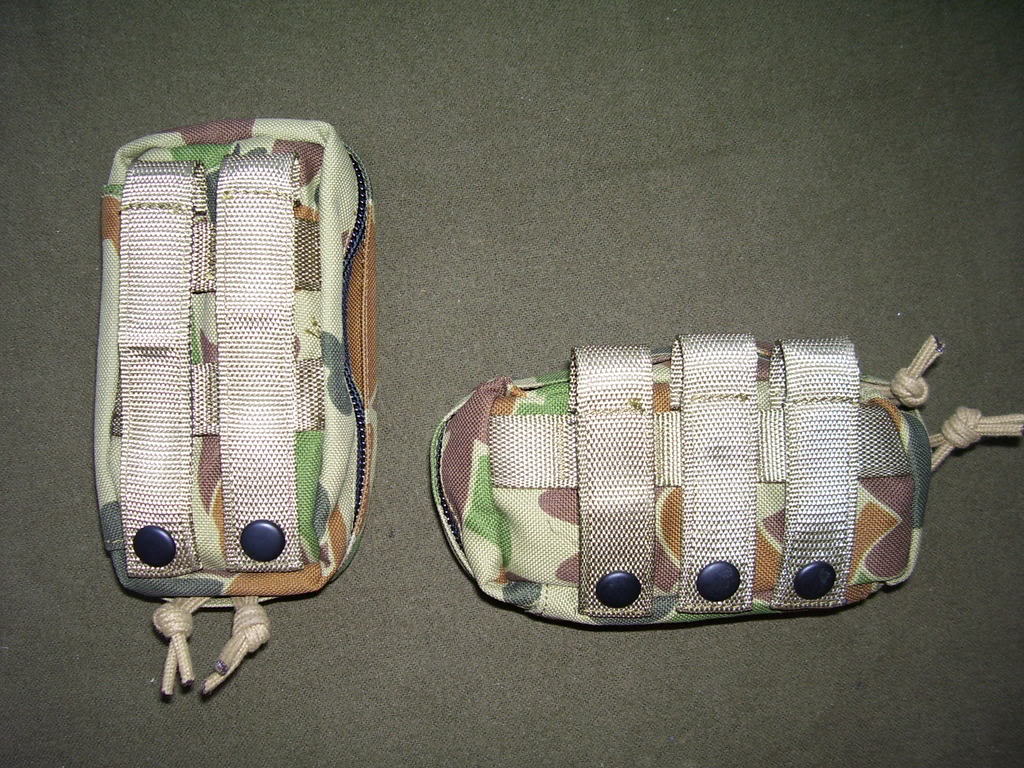 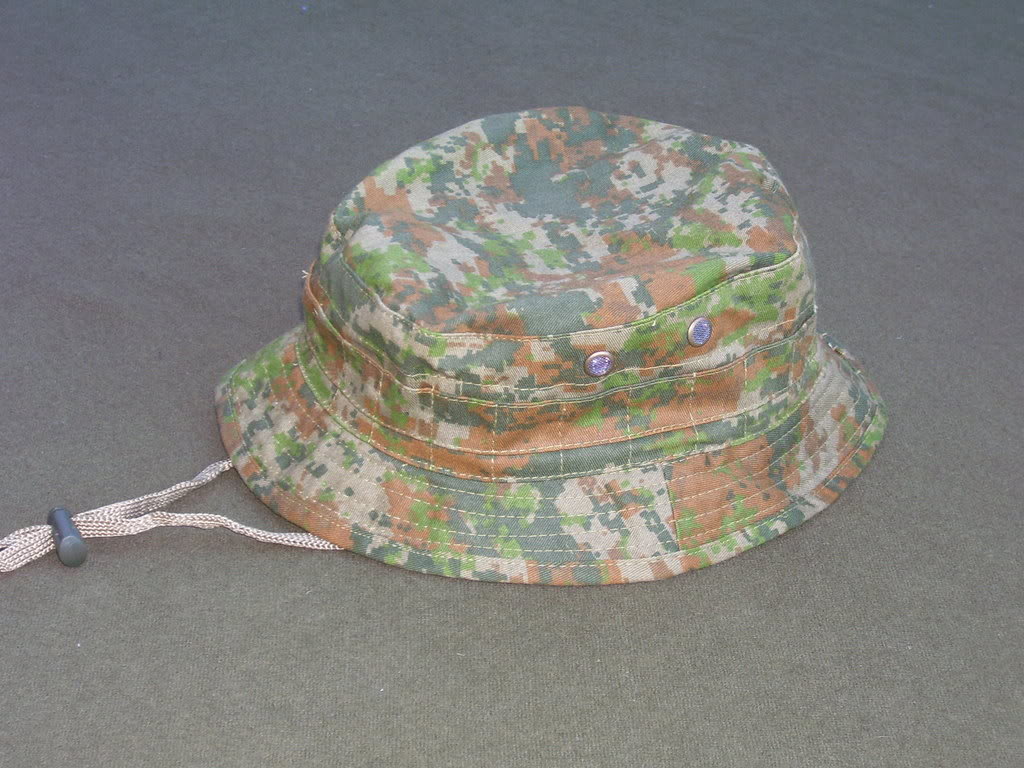 Short brim Bush Hat in unofficial Digitized Auscam. AFAIK the Australian Army has no plans to adopt this camouflage - it has been produced as an experiment by certain commercial concerns and it is rumoured that limited quantities have been procured by some state police departments for their tactical response teams.