So how do I tell...? All three main items are new and each looks like a different pattern... 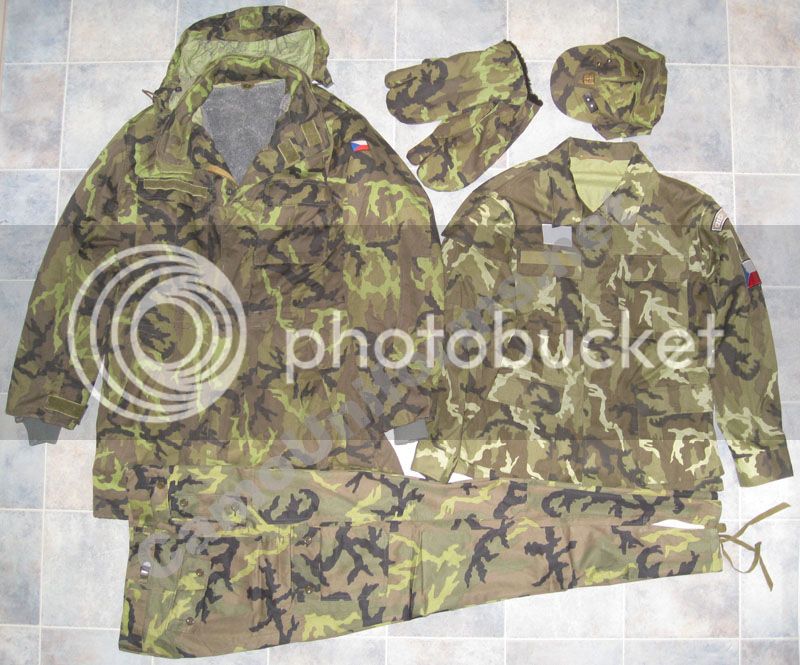 Yup, you have it correct. You can go by dates, by uniform features, or by cloth pretty easily with this stuff. Any one of them will tell you which it is with great reliability. There's really nothing similar about these two uniforms. Same for the desert kit.

See the first post of the page 4
https://iacmc.forumotion.com/t400p75-some-czech-camo
It seem that the pattern 85 is build after 1995, and I think that the difference between vz.85 vz.95 is in the cut of garment and the colors
First time I see this cream colouration, very nice!
Gilles
CollectinSteve

I've had a couple of the vz85 uniforms in hand and noticed some differences in colors. I also haven't seen a cream colored one, but given my past experience with these it doesn't seem to be out of character. Whether it was deliberate or accidental change I can't say. Usually these things tend to be accidental.

Here are detailed photos of each item.
(You'll need to log in or register)

That jacket really is a different cream colour than the others. Is it airborne construction or just standard?

Standard construction. I'm only aware of one vz85 and one vz95 design.

CollectinSteve wrote:Standard construction.  I'm only aware of one vz85 and one vz95 design.

You sure? I have a vague memory of someone explaining to me there is an airborne version.. I or they could be mistaken though.
CollectinSteve

Yeah, there might be something to that. The picture you posted is kind small and I missed some details when I first looked at it. Now that I've looked at it more closely, and taken my vz85 off the rack, there's some differences for sure.

The other things I now notice is that it has 4 pockets like vz95, instead of the 2 pockets of vz85. It has one arm pocket on the right arm vs. no arm pockets on vz85 and two pockets on vz95. The badging is standard for vz85, but check to see if there are stitch marks as 1993 might have been early enough for the first type (the national badge was sorta like an inverted triangle). The cloth is thin cotton, yes?

I took out my stuff and my vz85 jacket and trousers are both dated 1996. My vz95 jacket is dated 1997. I also have a vz85 desert jacket that is dated 1991 and identical to my vz85 temperate jacket in terms of the cut except that it has epaulettes. It also shows signs that it originally had the first type of national badging on it.

I will check my collection to compare my vz.85 with the post one.
What I know is that the vz.85 with this camo pattern was made between 1992 and 1997. It was used by Czech forces in former Yugoslavia (Kosovo).
poch

Well, I talked to few collectors, check my collection (photos will be next week, so stay tuned guys) and here are few notes about vz.85 and vz.95.
vz.85 camo (the trousers in the first post) was made between 1992 (1991?) and 1996. It is made from lightweigt fabric. Jacket exist in 2 variants: with and without shoulder loops for ranks. There are only 2 brest pockets. There also exists a coat.
vz.95 (the winter jacket in the first post) started in 1995. There are few variants of jackets: winter, summer, rip-stop, etc.

But the jacket in the first post with the nice cream colouration is not vz.85 nor vz.95. I don´t know how this pattern is named :-( Someone called it as the first patter of vz.95 but these uniforms were made in 1993! Because these were made in Slovakia, collectors are called them "Slovace". I don´t know if these were made for the airborne but I saw them used by Czech soldiers during UN misions in former Yugoslavia. Have to say, these are sought by collectors here in Czech and hard to find.

I hope next week I will add pictures. During November I am meeting my "step" relative - Lt.col. who served in misions so I will know more info.
Martin

Excellent information! That's a surprise about the jacket! I should have hung on to it... I will pass the information on to the person that has it now. So I wonder if it actually ever did have a vz. designation? Thanks for doing that research.

Now I'm even more miffed that I didn't win this last auction of yours, I was bidding on!

And cheers for the added info poch! Will look forward to further news!
poch

Martin,
sorry for one mistake in my last post. So called "Slovace" started in 1992 (not in 1993 as I wrote) just before Czech and Slovak Federal Republic split into 2 states.
The jacket probably exists in 3 variants. I have two in my collection. (Yes, the research about this uniform cost me a lot of money because when I was trying to find more information about this last week I found 2 jackets for sell and I really needed them! )
Martin

Interesting information, sorry to make you spend money Pavel, but I think the items you got now have a good home...

Ronny, sorry about that, I'll try make it up to you next time and throw something else in...