I'm guessing Vietnam era would be correct for this poster. I'm trying to identify what it is and when it may have been used. It's been sitting in our home for the past 20+ years. Very large poster on thick illustration board. It measures 40" wide x 30" tall.  Any information would be appreciated.

Thanks for the input. So most likely something in the Middle East. I'll attempt to move or have the thread moved. Thanks again.....
1stDivVet

Moved it here since we don't have a definate date or a specific bransh. Nice poster!

Thank you 1stDivVet. It is a pretty cool poster. We just don't have a place for it.
Cobra 6 Actual 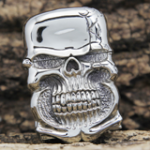 Late to answer, but: the troops are wearing M17 protective masks that were in service in the US military from approx. 1959 to the late 1980's, when the M40 replaced it. Also, during the 1960's the US used the acronym CBR (for "Chemical, Biological, Radiological") instead of NBC ... which was ultimately replaced by CBRN/CBRNE. As an aside, during and just after WWII the acronym was ABC for "Atomic, Biological, and Chemical."

So, what all of the foregoing means is that this poster is probably from the mid-1970's to the late 1980's. Hope that all helps.
Sponsored content