This should be uniform designed for Czechoslovak army and also used for short period. However as it is made by Slovak company and stamped 1993 (Slovak republic exists from 1st January 1993) and it was used by Slovak army I posted it in Slovakia sub-forum.

There is a lot of speculation about this uniform. Also collectors made up some more designations for it (vz. 85PV, vz. 92, Slovak vz. 95, Slováče etc.). There are a lot of versions of this uniform which differs in both cut, colour and fabric used. Some of them were only trial versions, some were accepted into army. Slovak army doesn´t distinguish them at all. They are all vz. 85PV (sometimes refered vz. 85V with print).

This uniform was for the long time used only by the 5th Special Forces Regiment stationed in Žilina. They preferred it over the standard army vz. 97 uniform mostly to distinguish themselves from the non-elite units. As the pattern is quite similar to Czech vz. 95 pattern they unofficially used the Czech items when appropriate Slovak counterparts were not available. This is true not only for the uniforms but also for all tactical gear.

In 2007 when the new digi camo was introduced also the 5th Special Forces Regiment received it and they lost their distinctive uniform.

Recently the vz. 85PV became more available as they were allowed to be used together with the vz. 97 as the training uniform for all forces. This was caused by serious shortage of all vz. 2007 uniforms. 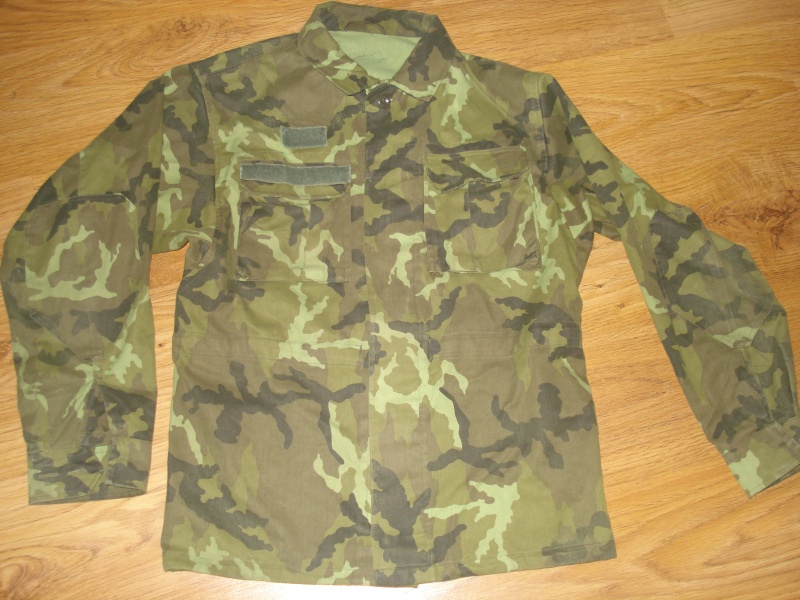 Pockets are closed by velcro 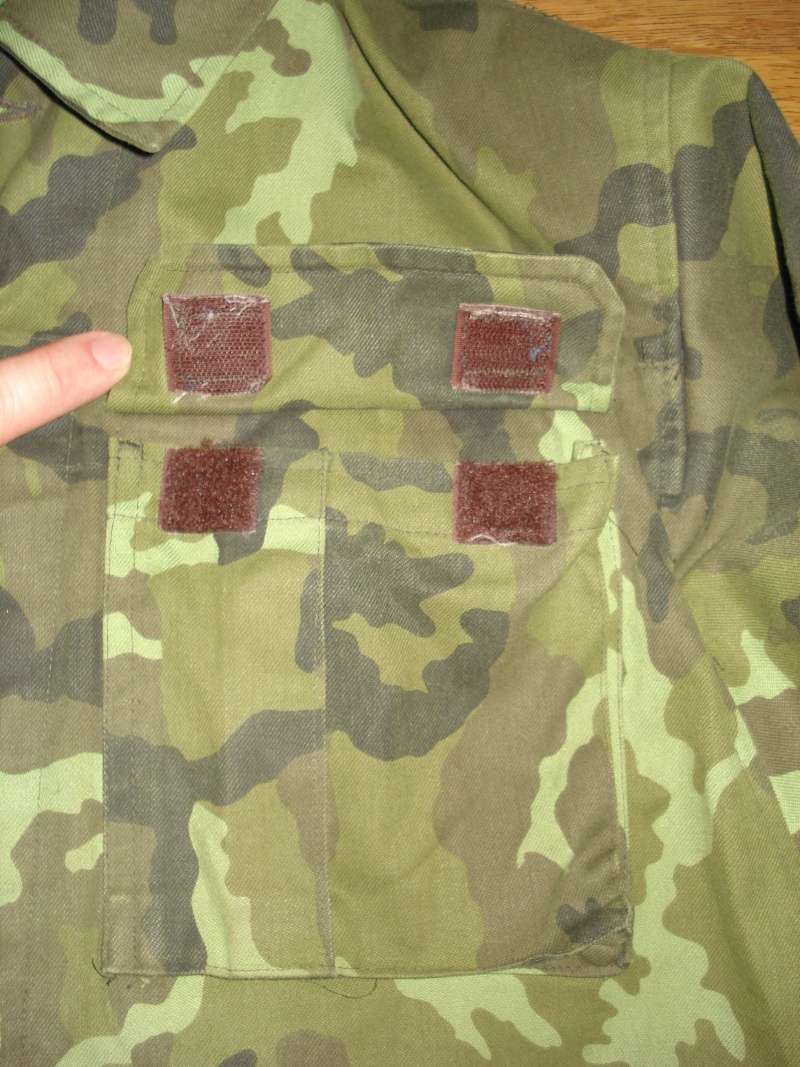 the back is totally boring without any interesting features 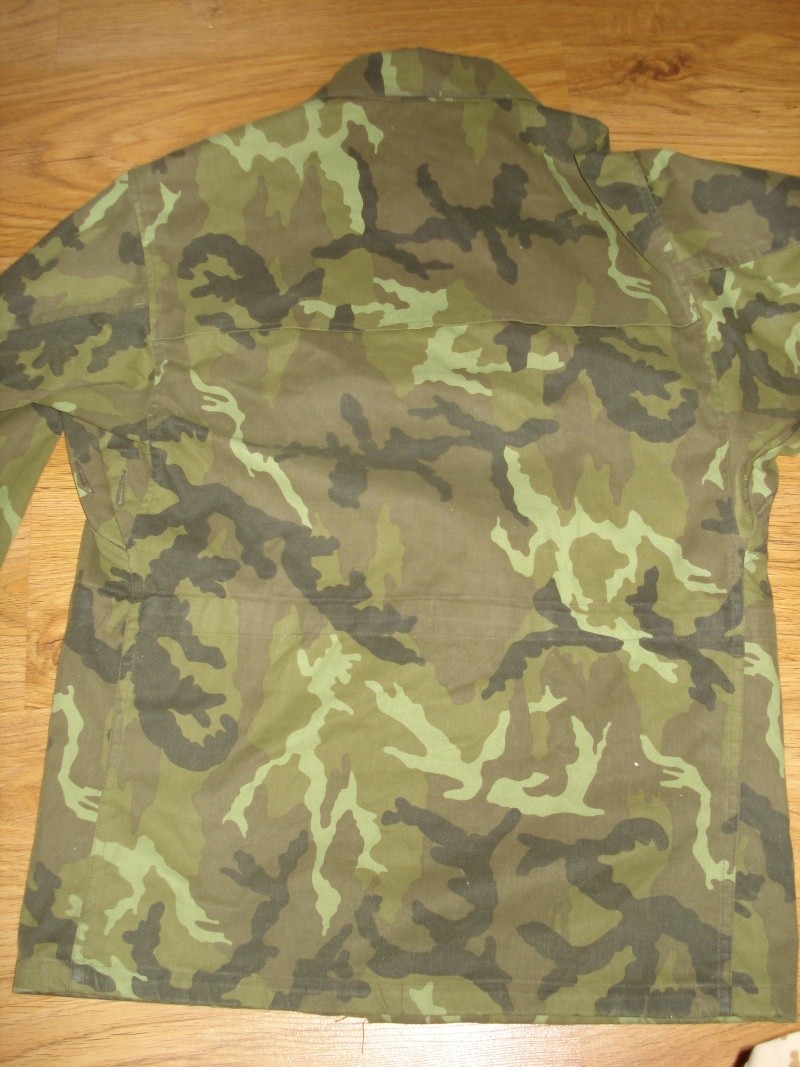 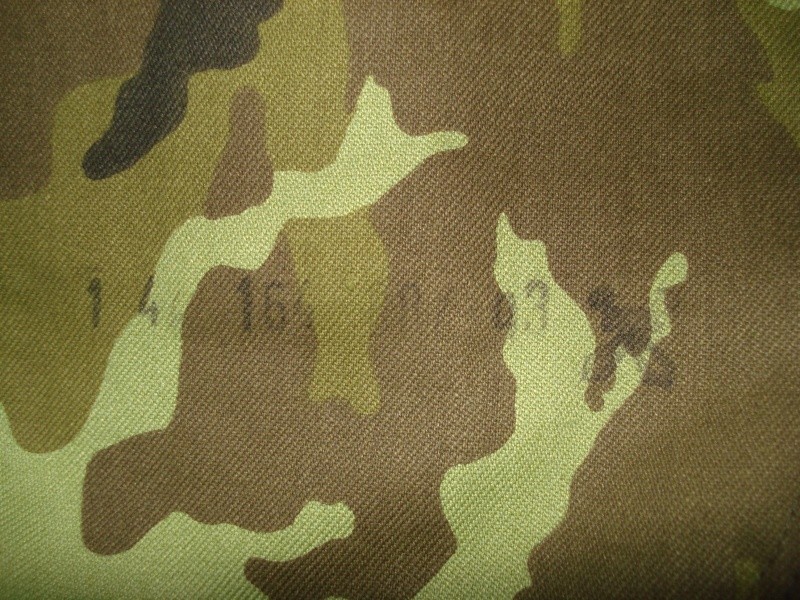 Manufacturer Odeva Lipany still makes some items for Slovak army, but they now specialize in dress uniforms instead of combat 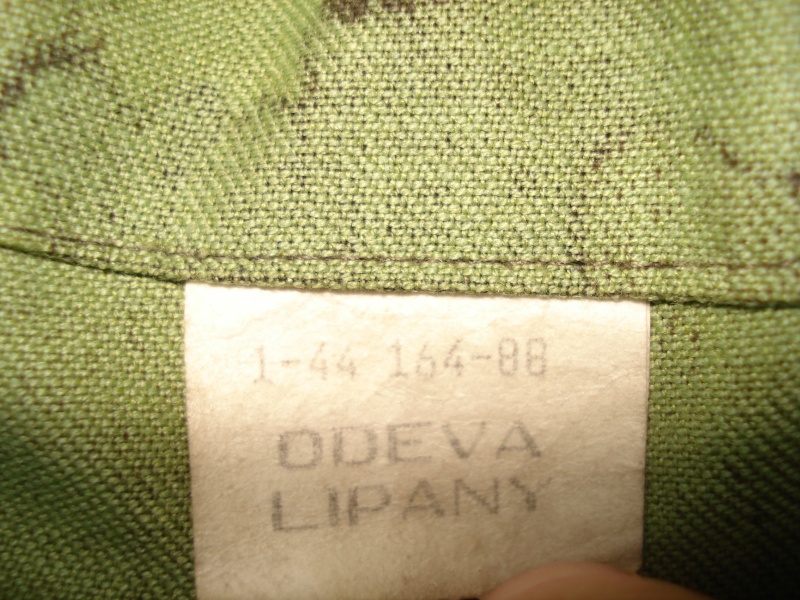 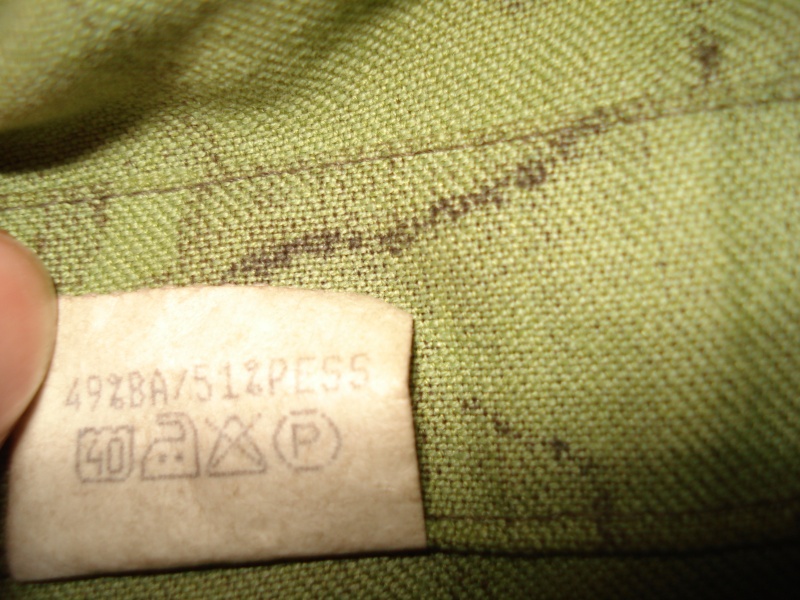 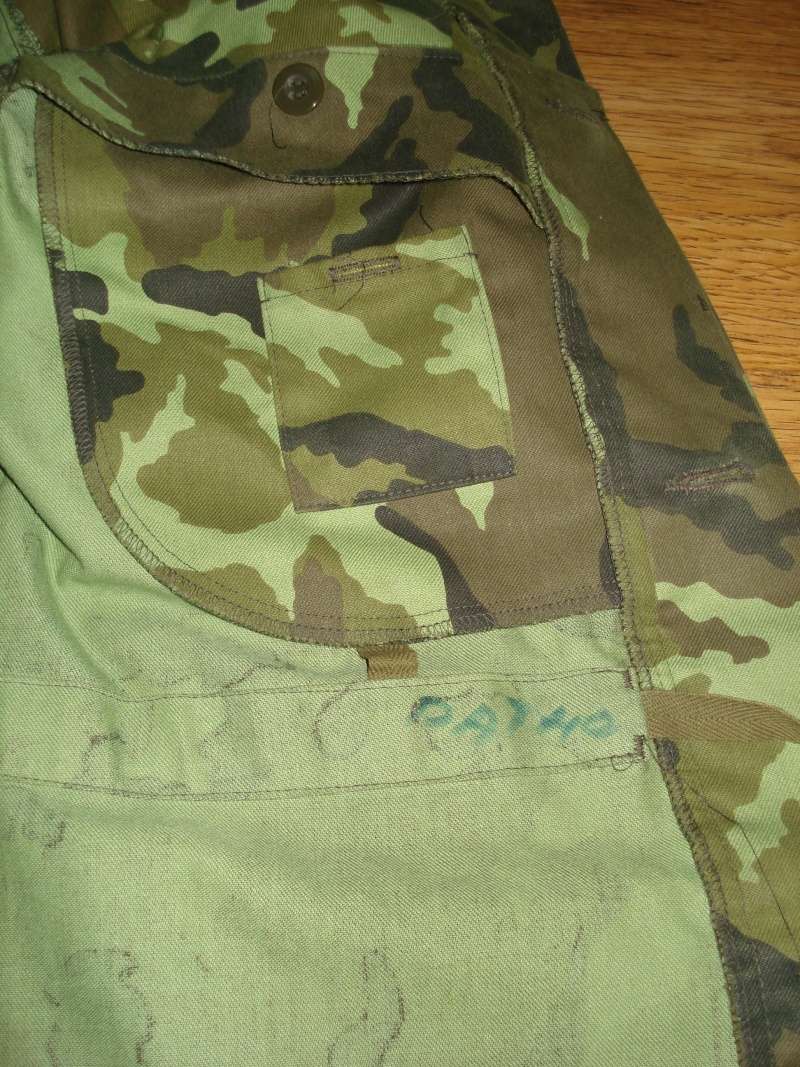 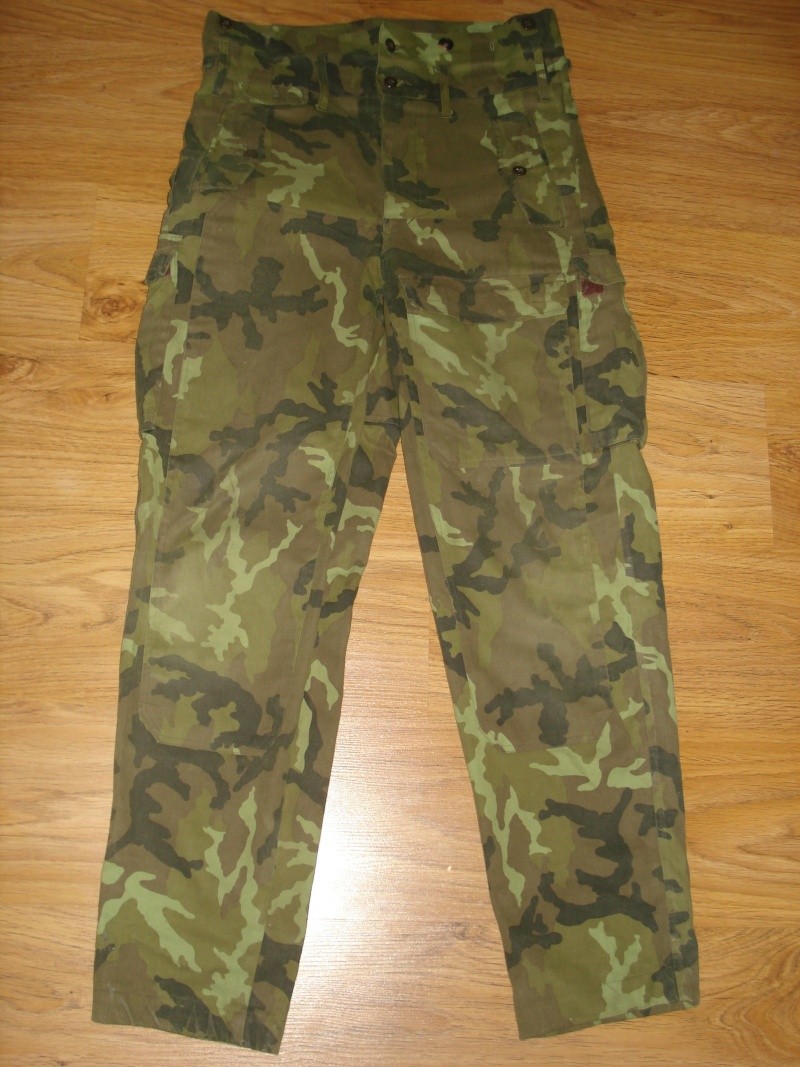 high waist similar to the one on the standard vz. 85 trousers. The waist buttons for braces are not genuine. They either were never there or the original were removed and civilian reattached. 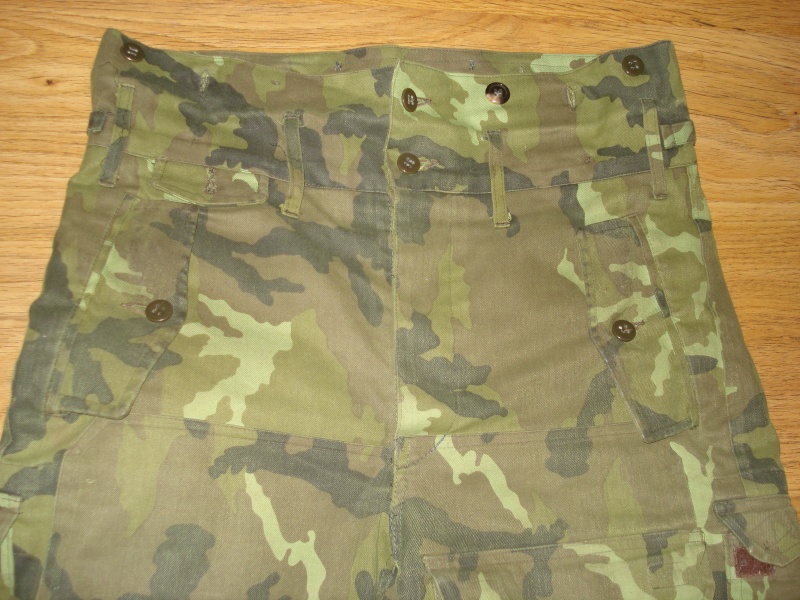 and finally the knife pocket with appropriate para knife 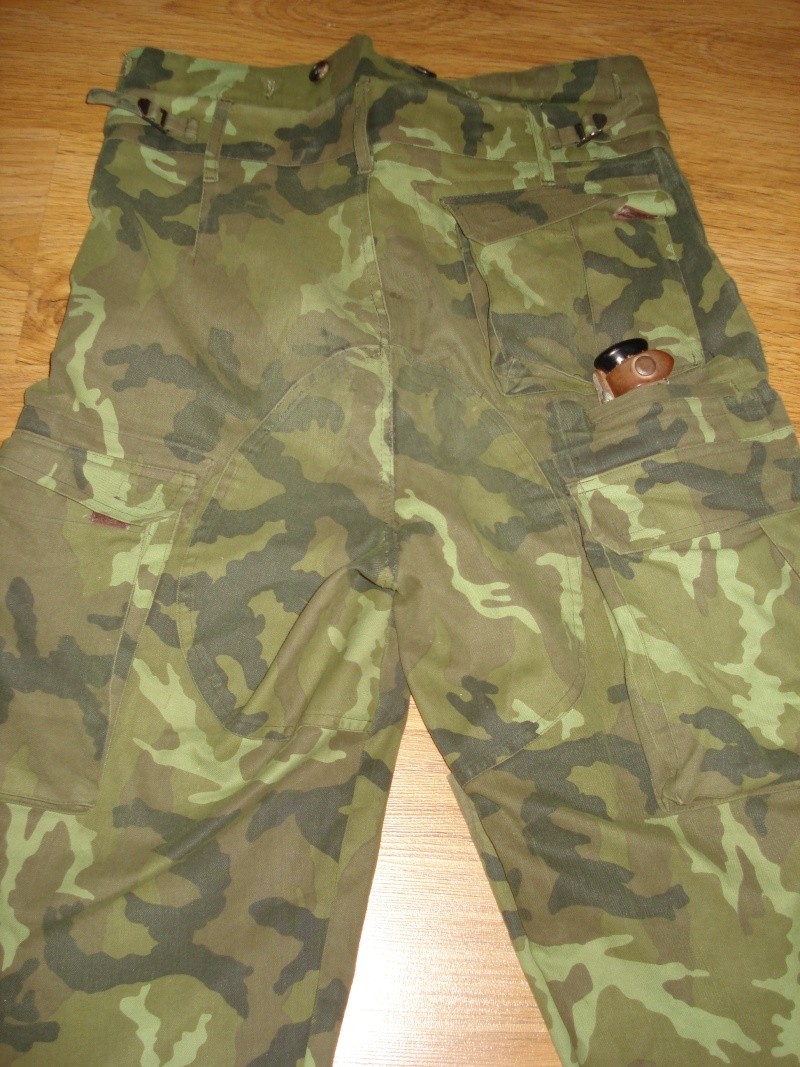 As the set is too small for me it is available for sale or trade.
CollectinSteve

Cool! I did not know this uniform existed. While we are talking about designations, what are the official Slovak uniform designations since becoming an independent country?

CollectinSteve wrote:While we are talking about designations, what are the official Slovak uniform designations since becoming an independent country?

So uniforms that were used by common Slovak units:

Vz. 60 was by most units used until replaced with vz. 97 and the 85 were not used much just kept in warehouses. Although just a few years ago was vz. 85 still used for guard duty but it was loong ago after adoption of vz. 97 or even 07.


As for the interesting uniforms mostly used by paras and sometimes by forces deployed in UN missions:

I think that the only official designation for many various uniforms is, like mentioned here vz. 85 for paratroopers (with print) or shortened vz. 85PV.


However according to some hearsay evidence, some collectors discussions the vz. 85 for paratroopers can be distinguished into few more categories which were not an official designations.

vz. 85 PV as posted above
vz. 92 predecessor of Czech vz. 95 - colour is same like the vz. 85PV but the fabric and cut is different. It should be designed during Czechoslovakia and adopted by Slovakia for paras afterwards
"Slovak" vz. 95 - same cut as vz. 92 but the camouflage and fabric is identical to common vz. 97. It existed probably only as a test run, however they were sometimes used together with vz. 97. But almost never the complete set but mixed with vz. 97. Soldiers called them "para vz. 97."

However I think that all of these items were officially called just vz. 85PV. But again I am not an expert so don´t take it like 100% true.
Thibir

Haha, really funny piece of information. This pocket appeared on the para vz. 60 trousers for the first time. It was not designed for the knife as I thought. It was designed to hold the barrel of the vz. 58 rifle during the jump when the rifle was slung over the shoulder. However the pocket is on the right side and the rifle was worn on the left shoulder. This means that the pocket was never used for its intended purpose. The manufacturer was stubborn and didn´t switch the side even when the army told him about this problem.

So the pocket was used either for knife or for rolled beret.


Obviously manufacturer of these trousers vz. 85 copied this feature from vz. 60 trousers without thinking about it :-)
Sponsored content