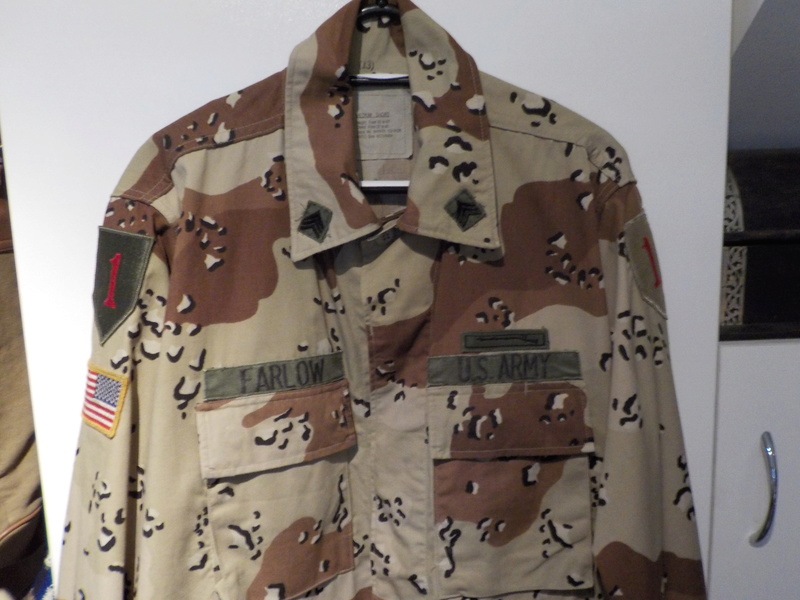 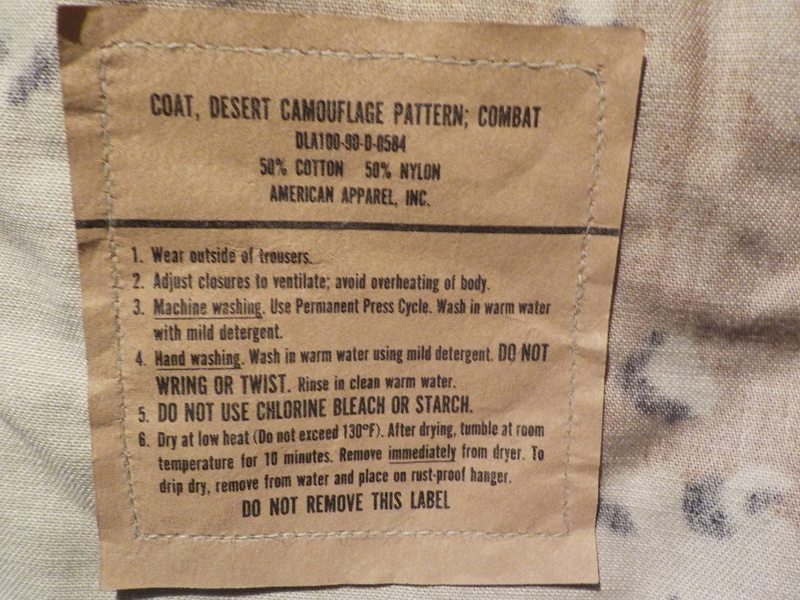 badged or is this the transition period.
Wolverine

It is hard to say without high res views of the patches. I think that the reversed flag is unusual on jacket that was supposed to have been worn in the early 1990s.
1stDivVet

Agree with Andrew. We still had the early flag in 91. I think I got that type of flag before going to MFO in 92 or Somolia in 93. They varied in size too. We used whatever we could find. You didn't see to many desert tan patches either. I had one made on 6 color with a tab that said "Gulf War". A buddy got me a couple of that type of BRO patch in Iraq a few years ago. We had either woodland subdued or the full color red on green. Not saying the tan one isnt right, but you rarely saw them. Most guys had the OD tapes also. Very few had desert tan. I had had mine made while in AIT at Ft Huachuca. Mine were also brown on tan, not the usual black on tan.

Thanks for that info, the coat is next to new would it have been a barracks coat worn by some rear echelon NCO. regards Jim.
1stDivVet

We all got either 1 or 2 brand new sets before ee came home. I didn't even have patches on mine other than tapes. After we got home, we went back into BDU's. We weren't authorized to wear the deserts at Ft Riley.
_________________
If i'm the stupid one, why do they have a book with pictures of the militaria and I have the real things??
Wolverine

Not a patch person myself. Any info on either the tags or patches would be much appreciated. The flag patch is dirty the other shoulder patches look new & the tags look used. thanks in advance to all. Jim.
Camo-collector1951 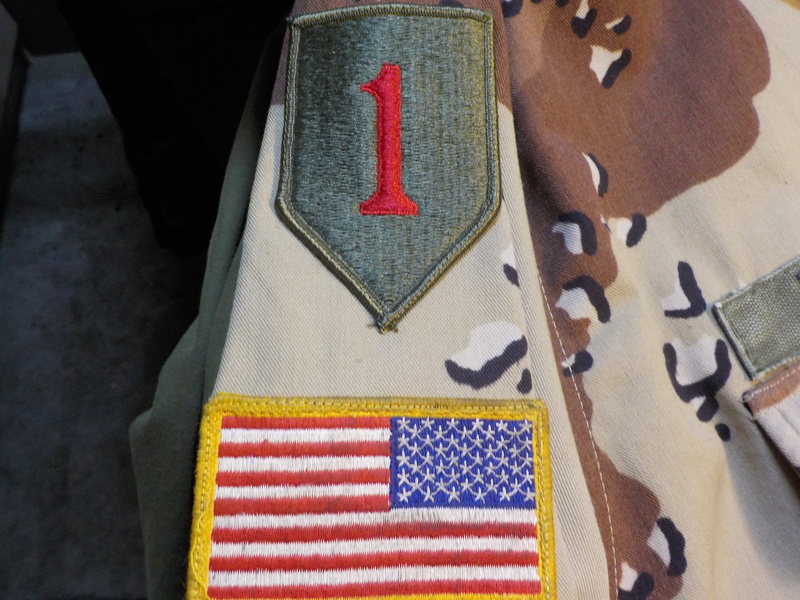 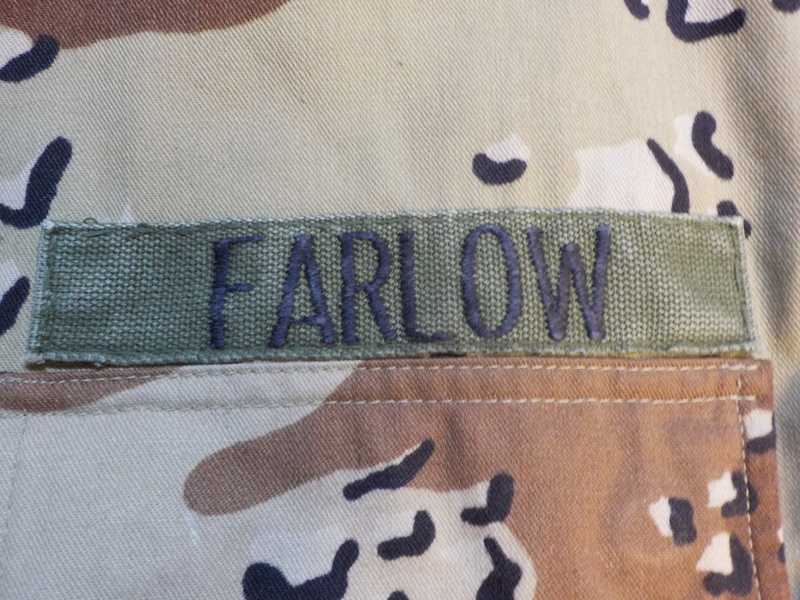 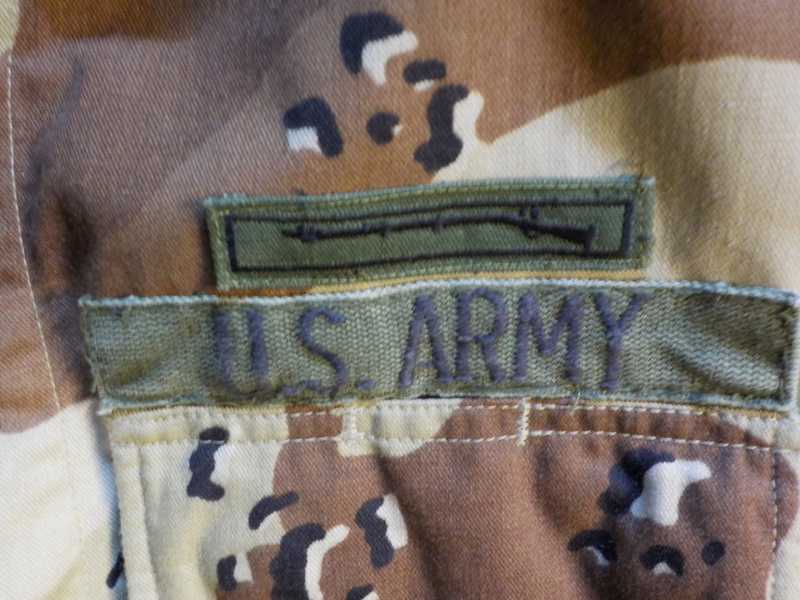 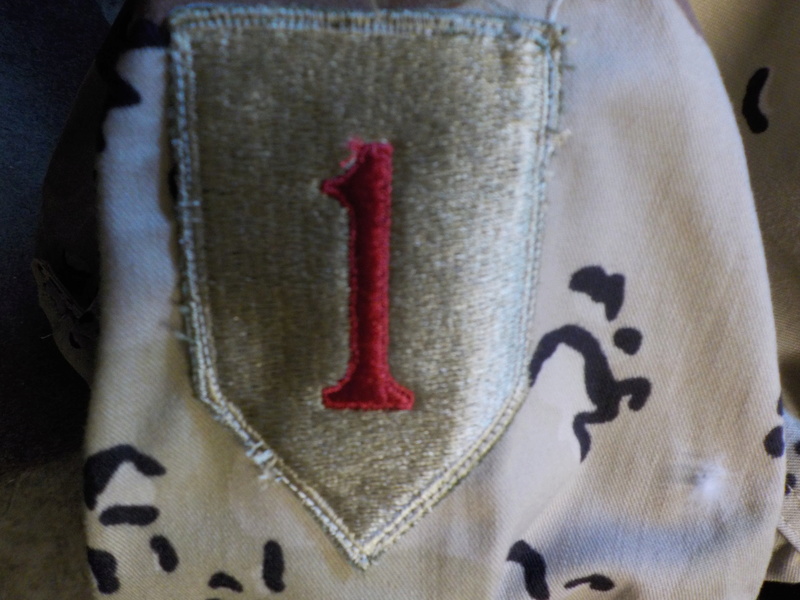 It seems likely that the tapes were transferred from a set of BDUs, as they are clearly well worn compared to the jacket. The EIB looks almost new, and the shoulder patches are harder to explain. The combat patch appears to be a normal regulation patch, while the one on the opposite sleeve appears to be commercially or locally made, with a cut edge. I still can't pin down the colour on it. How the soldier ended up with that particular combination, and a reversed flag I don't know. In Desert Patches, Born and Barnes point out that early theatre-made desert patches are normally pretty crude, so I doubt that the left sleeve patch falls into that category.
1stDivVet

We did transfer a lot of tapes off bdu's to the deserts until the tan ones were made/issued. The left sleeve patch looks like one a friend sent me from Iraq mid-OEF. The ones we got ovdr there were much cruder.

There could be more clues in where this jacket was found. If it was fished out of a surplus bin for $3.95, then it would seem unlikely that it is a put-together. If, however, it was had from Ebay, or some other such venue for a higher price, that might be cause for suspicion.

Thanks everyone. I found plenty of reference pictures to most of the patches on the net but nothing with the subdued 1st div. patch. regards Jim.
ripcord 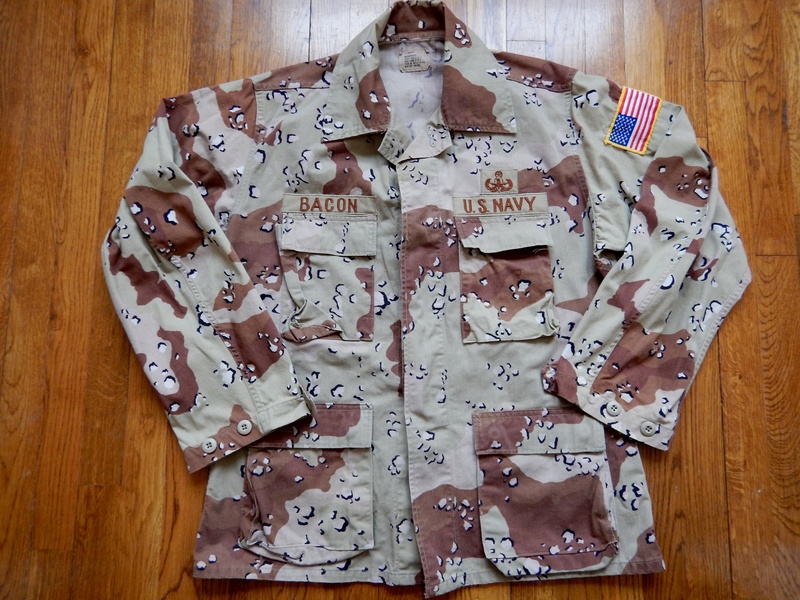 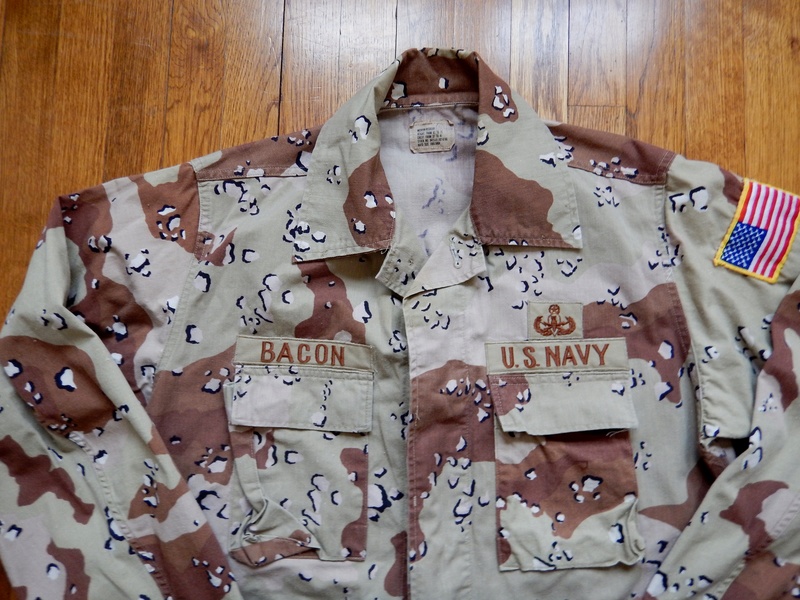 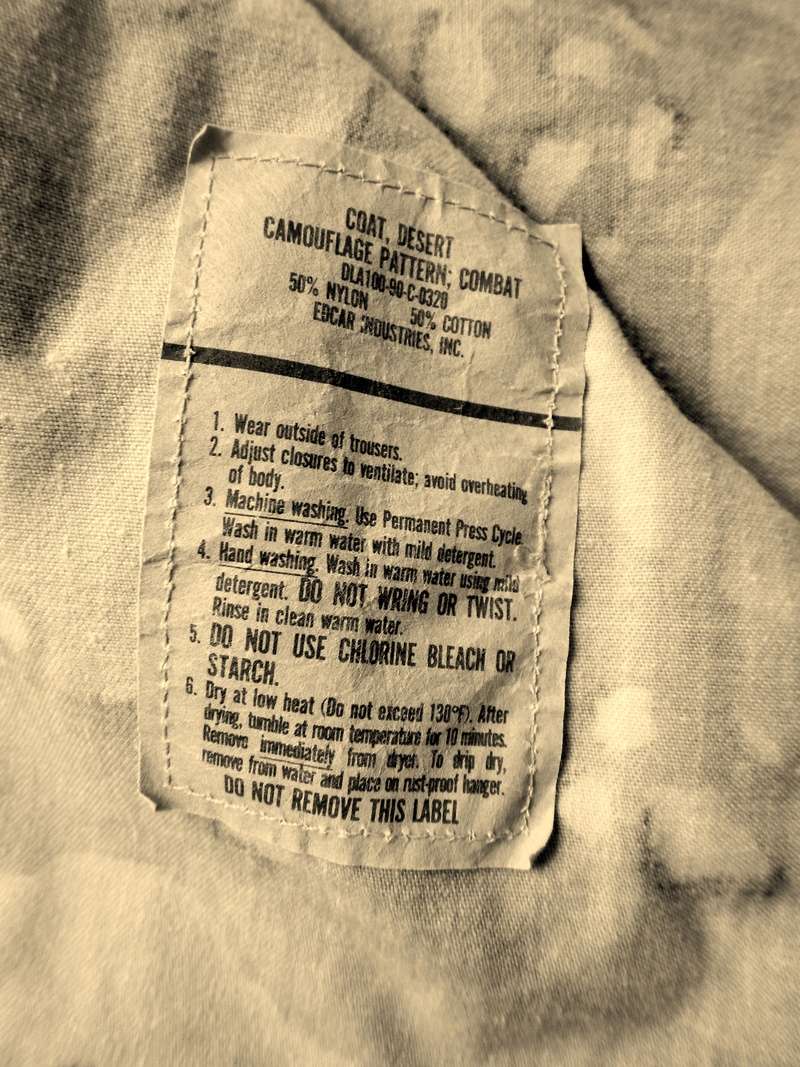 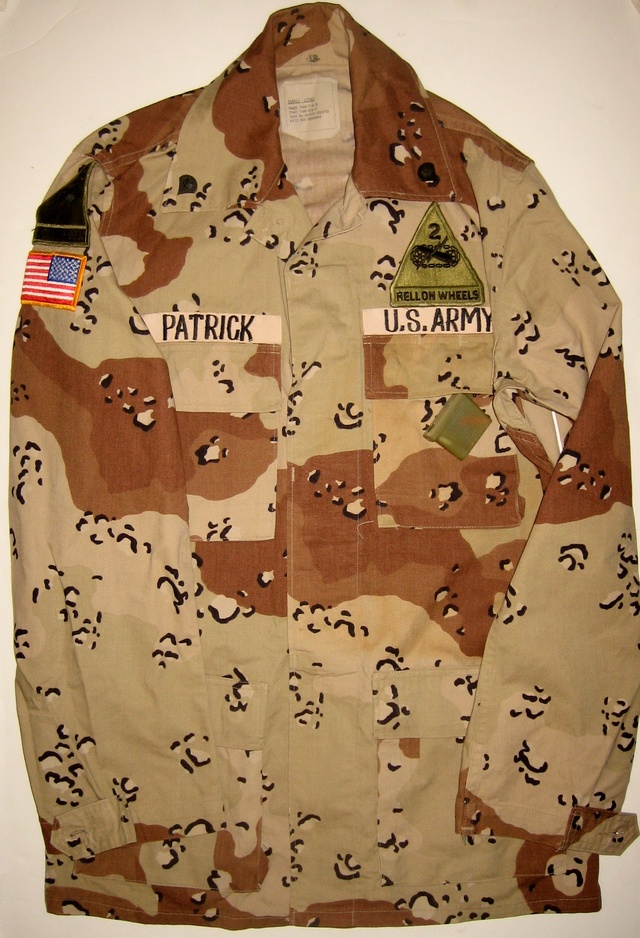 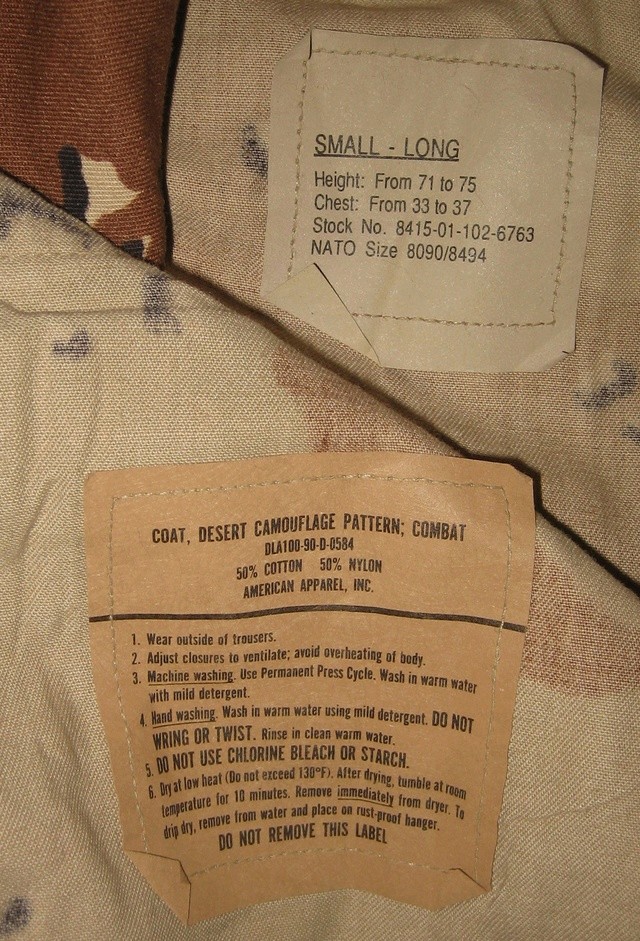 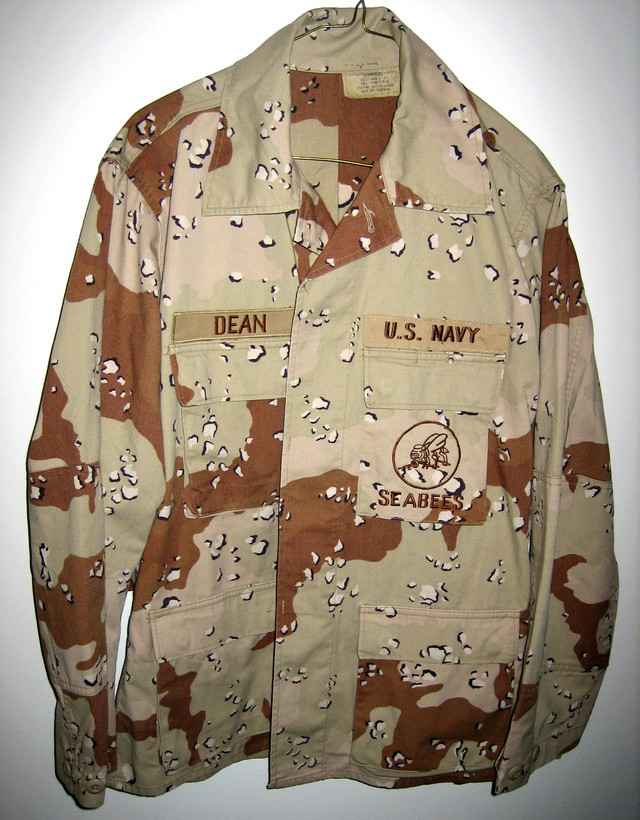 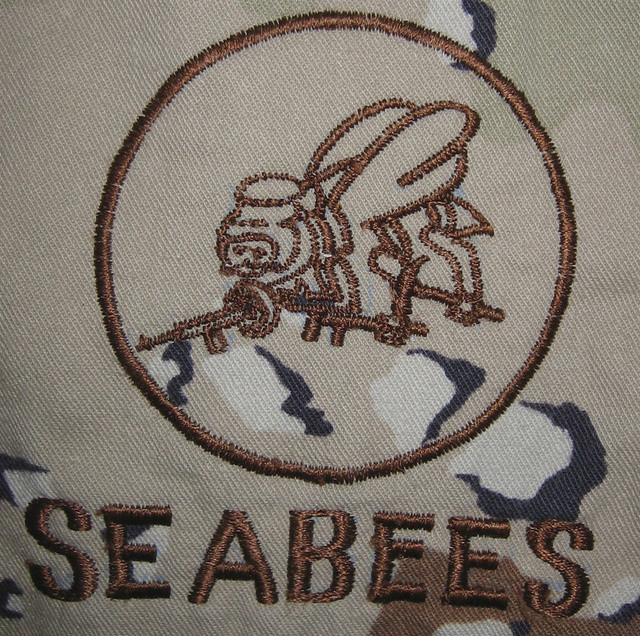 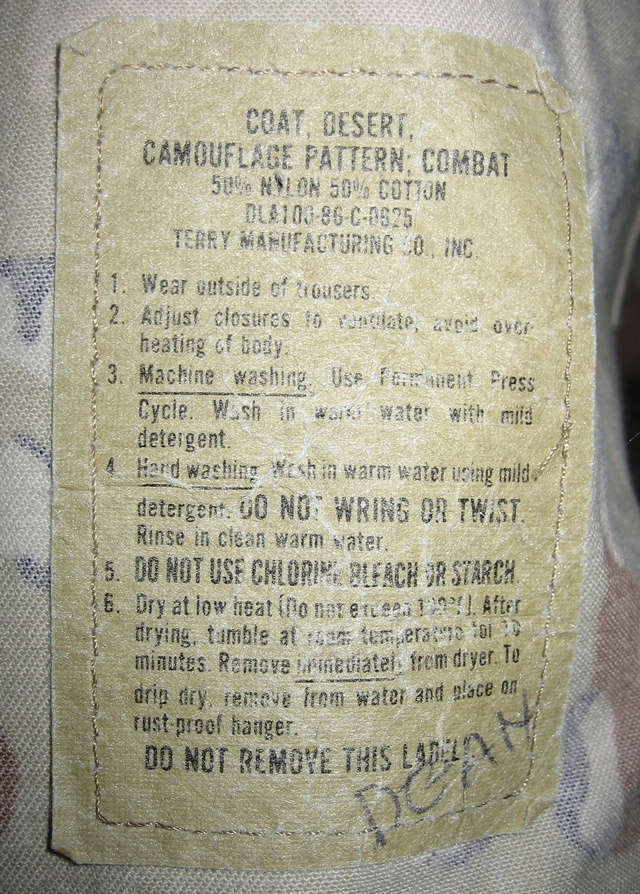 I am amazed at the variety of configurations of patches and tapes. And have never seen the unusual one Andrew has put in with the Hell on wheels above the army tape. thanks for all your input. regards Jim.
1stDivVet

2nd Armored is always worn above the left pocket. Closest to the heart as it was to Gen. Patton and done in his honor. I've got or had a Vietnam era utility and still have an occupation era hbt jacket with it that way. 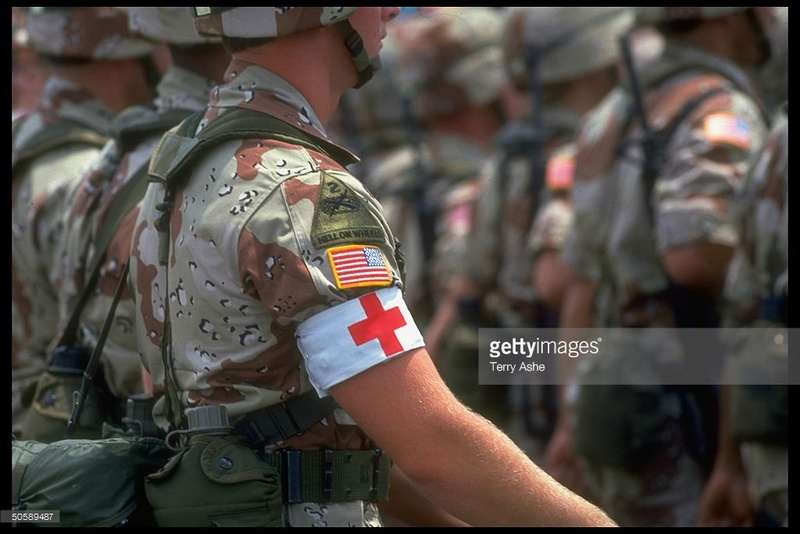 of course now that I want them I can't find any pics of backwarsds flags in the 1st gulf war, but they can be seen.
1stDivVet

It's worn as a combat patch in that photo. Current duty personnel assigned to the 2nd Armored wear it over the left breast, or did from WW2 past Desert Storm. When is this picture from and what unit? 2nd Armor as a combat patch before ODS would have been from Vietnam and that guy looks young. I don't see combat patches on anyone else either. GREAT pic of the corpsman brassard. Rarely see these worn after Korea.