By the summer of 1862, the Civil War action was just across the Ohio River from the Queen City, Cincinnati. The Union Army had been defeated in Richmond, Ky. Confederate Gen. Kirby Smith was planning to repeat his success in Cincinnati and perhaps beyond into Ohio.

Ohio Governor David Tod on Aug. 30, 1862, officially announced:
"Our southern border is threatened with invasion. I have therefore to recommend that all the loyal men of our counties at once form themselves into military companies and regiments to beat back the enemy at any and all points he may attempt to invade our state. Gather up all the arms in the country and furnish yourselves with ammunition for the same. The service will be of but a few days' duration. The soil of Ohio must not be invaded by the enemies of our glorious government."

By Sept. 5, more than 15,000 men from 65 Ohio counties had arrived in Cincinnati, mostly by rail. There were 404 from Licking County, young and old from all backgrounds, and most with no military training.

They wore their own clothing and took their own hunting rifles and ammunition. A Confederate scout was said to have commented, "They call them 'Squirrel Hunters,' farm boys that never had to shoot at the same squirrel twice."

To thank the Squirrel Hunters, the Ohio legislature, in 1863, authorized funds for Governor Tod to print discharges for these men from military duty. The discharges thanked the men for their patriotism and their willingness to sacrifice their lives in the defense of Ohio. The resolution reads:

Resolved by the Senate and the House of Representatives of the State of Ohio, That

fund, a sufficient sum to pay for printing and lithographing discharges to the

patriotic men of the State, who responded to the call of the Governor, and went to

the southern border to repel the invader, and who will be known in history as the

For two weeks, the Squirrel Hunters manned hastily prepared but substantial earthworks across from Cincinnati in Northern Kentucky for an attack that never came. Brown County provided over 1,300 Squirrel Hunters for the defense of southern Ohio, more than any other Ohio county. In 1908, the Ohio Legislature voted each volunteer to be paid $13, a usual month's pay for a Union soldier. Just as the Lexington Minutemen responded to the call to defend their homes in 1776, the Squirrel Hunters will long be remembered as answering the call to defend their homes in 1862.

The Squirrel Hunters helped dig trenches and other fortifications, but saw no real action against the enemy, who soon retreated. Tod wired Secretary of War Edwin M. Stanton on Sept. 13, "The minute-men of Squirrel Hunters responded gloriously to the call for the defense of Cincinnati. Thousands reached the city, and thousands more were en route for it. The enemy having retreated all have been ordered back. This uprising of the people is the cause of the retreat. You should acknowledge publicly this gallant conduct. Please order Quarter-master Burr to pay all transportation bills, upon my approval."

With that, the minutemen of Ohio, the Squirrel Hunters, were discharged. Certificates were printed for them, many of which might be found today. In 1911, the Ohio legislature finally approved to pay those who yet survived for their services, but only a few actually were paid after a long verification process. They received $13. https://civilwartalk.com/threads/ohio-squirrel-hunters.96134/

Grafton Pearce was from Southern Ohio. He was 14 when he marched off to defend Ohio's border. By16 he was a QmSgt. with the 5th Ohio Independant Cav, and by 1865 was enlisted in the Signal Corps in the US Volunteers. 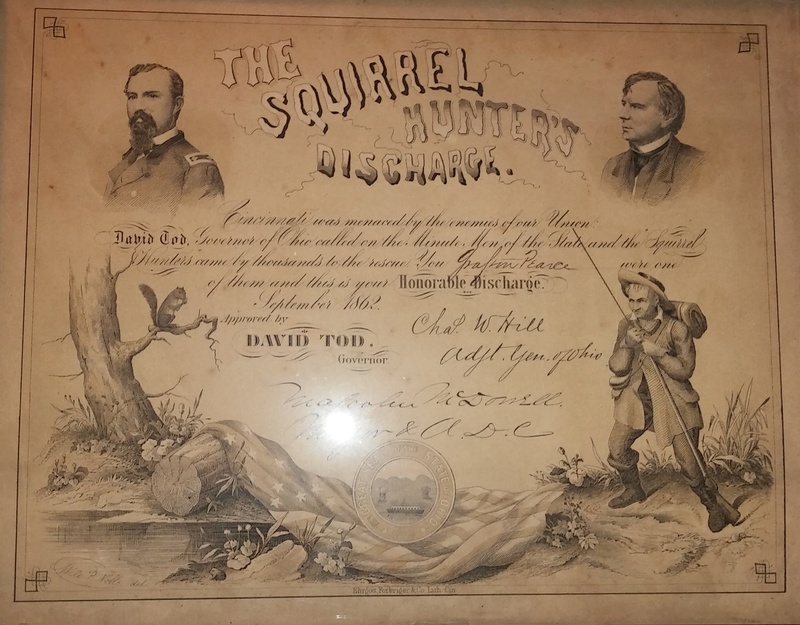