Admittedly, this is a bit of an obscure topic so I'm not sure if anybody can answer my questions. But a question not asked is a question certainly not answered

I have one of the rare 1970s? 2nd Model Para Green/Red Amoeba sets. It came to me pretty much as you see here, though I've added what I think is the correct type/vintage airborne badge on the right sleeve. Someone had glued a badge there before me as well as a cut out of jump wings over the right breast pocket. You can see the glue in the picture.

My question is what should I do with this? I think I should put a standard rectangular early post-Franco OD field type para badge over the right pocket, which both matches the blank name tape and also covers up the glue. However, if this uniform was used strictly for ceremonial duties, maybe the cut out dress uniform (full color) para badge is correct for after all?

The second question is what to do about the left arm. As you can see this jacket was worn by someone in Bandera "Roger de Lauíra" and I do have a badge for this bandera that I could put on the arm. But was wearing the two badges common at this point or specifically OK for this uniform?

Any thoughts are appreciated! 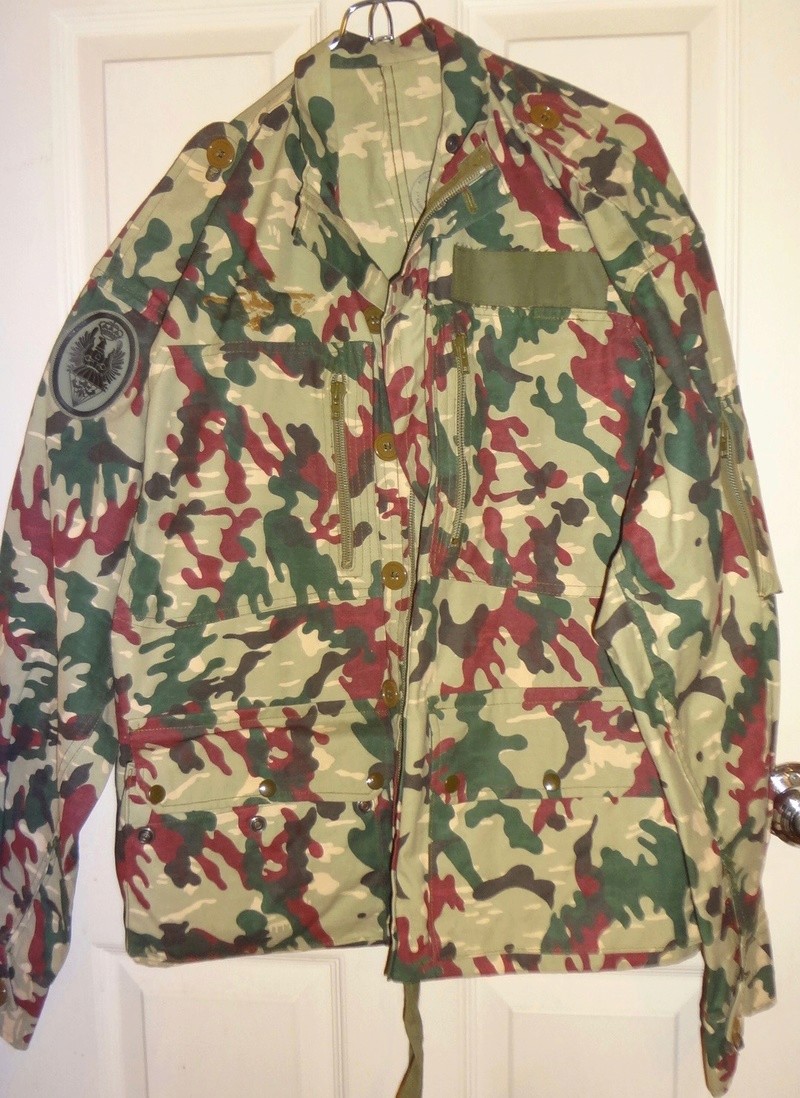 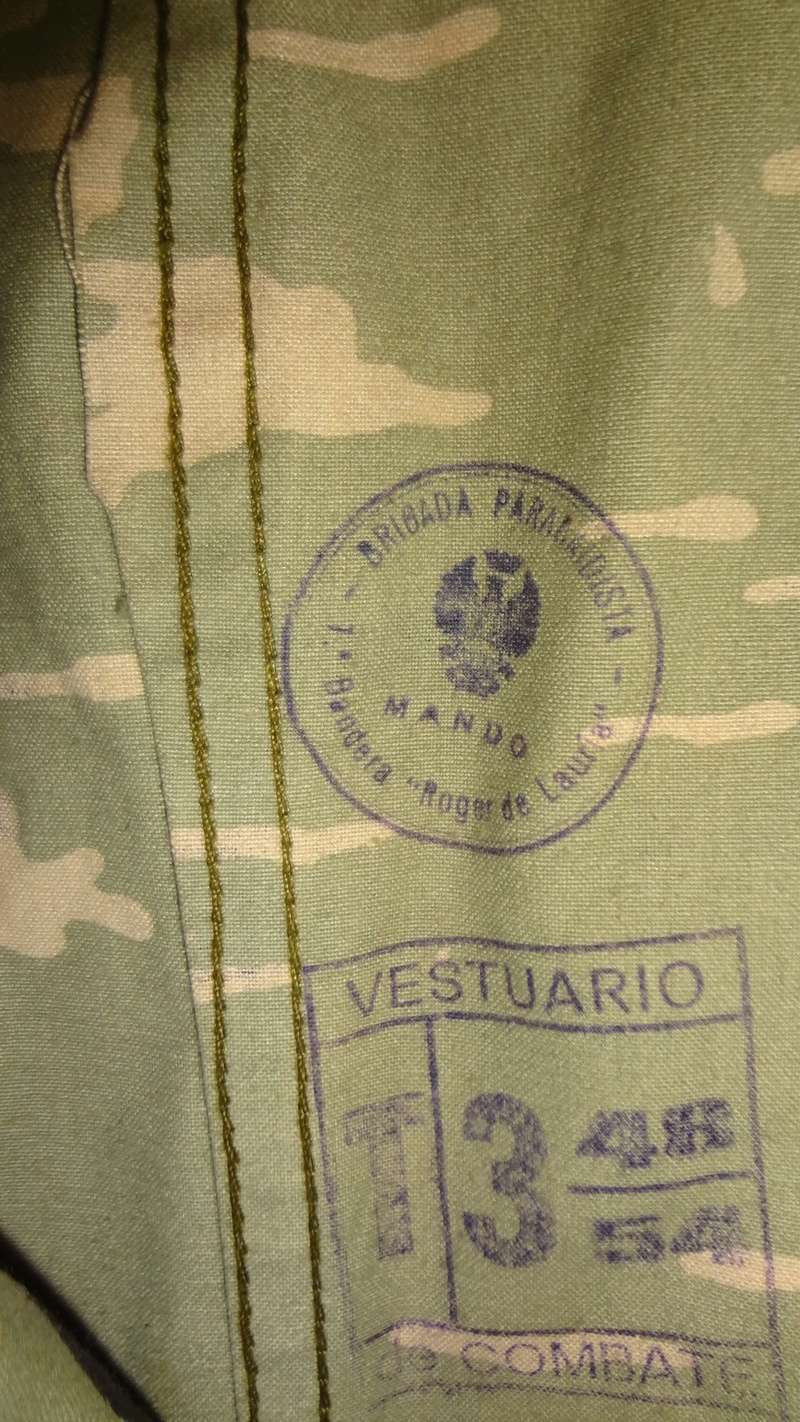 Have had a couple of these uniforms over the years. All the ones I've seen had cloth olive color para badges and either one or no para brigade patch.. 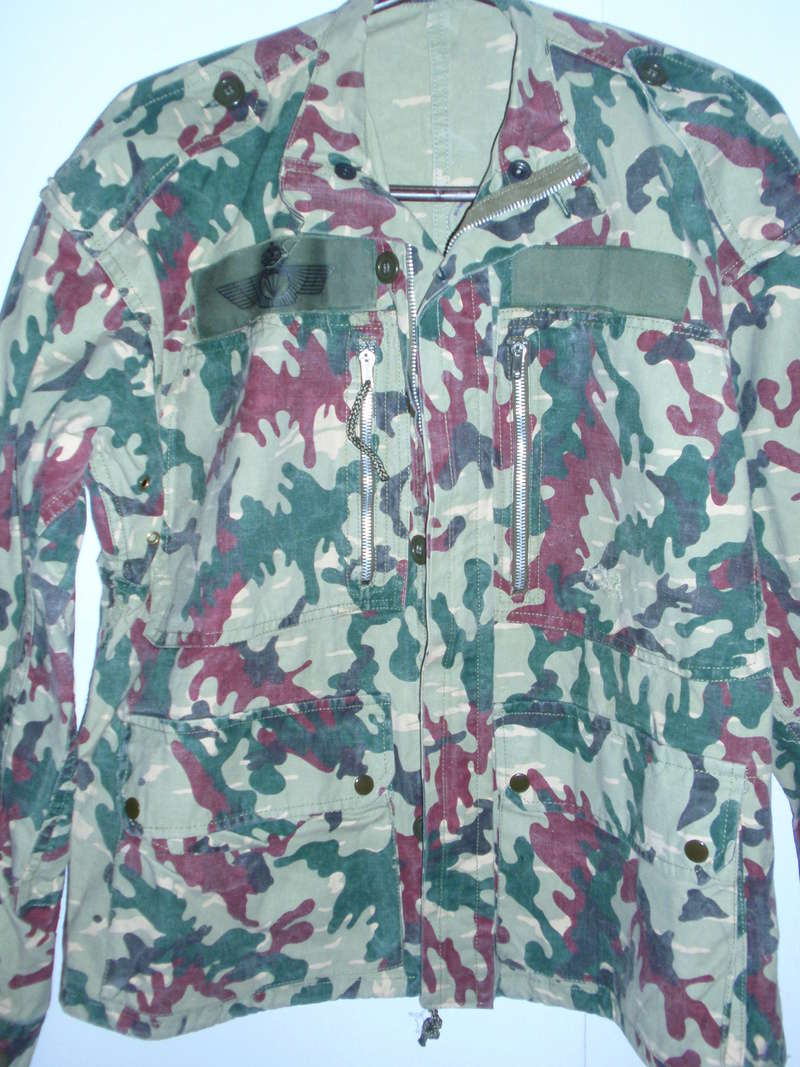 Excellent! That was my guess, but before I sew things on I like to double check

I suspect some collector along the way glued an incorrect jump badge to the chest.

There's a couple of age related variants on the unit badges. Do you have any closeups of arm badging on yours?

I've removed more than one incorrect patch from Spanish and other uniforms so I know what you mean..

Fairly certain this type of uniform was released in the '80s so any insignia should be the post 77 type.

The set in the photo I posted was traded to Danilo and I dont believe it has any shoulder patch.

There is one set posted by FobanX under 'Red Amoeba " that shows post 77 wings and BRIPAC shoulder patch as I believe it should be.

Great, that's helpful! However, I'm trying to be even more specific than that

There's several different variants of badging post Franco that are year specific. Unfortunately I am not quite sure of what the date ranges are or if it really matters! As you point out, so many of the Spanish uniforms we run into are not badged correctly, so good examples are hard to find.

Here's what I'm talking about: 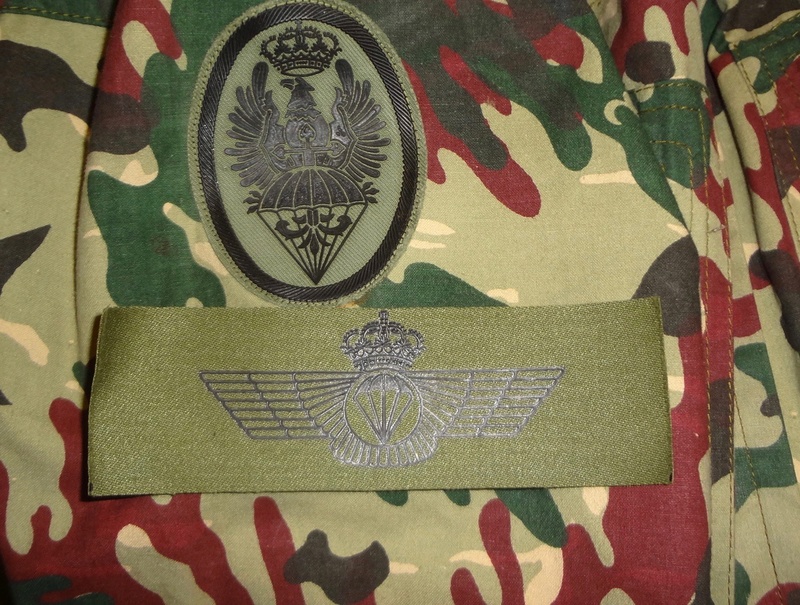 Notice that both badges are unissued, but the one I've got on the arm (which I did!) is lighter and the jump badge is more olive in color. From what I understand the lighter ones were from the Franco and immediate post Franco era. The olive types were from later, probably late 1980s through early 2000s. There is also an intermediate type that is on a brown backing, which seems to have been mid to late 1980s and only used for a very short period.

I have a feeling the lighter colored one is probably correct, or at least more correct. Unfortunately I don't have a matching unissued jump badge to match. Used ones, yes, but too obviously used.

I found FobanX's posted picture in this thread:

It looks like his has the lighter backed one, which is what I guessed would be "more correct" than the olive type. Now off to find an unissued one

I had to sift through 1400 listings (not an exaggeration), but I found *ONE* 1980s Army jump badge that appears to be the color and condition I need. Not cheap, but that's life! 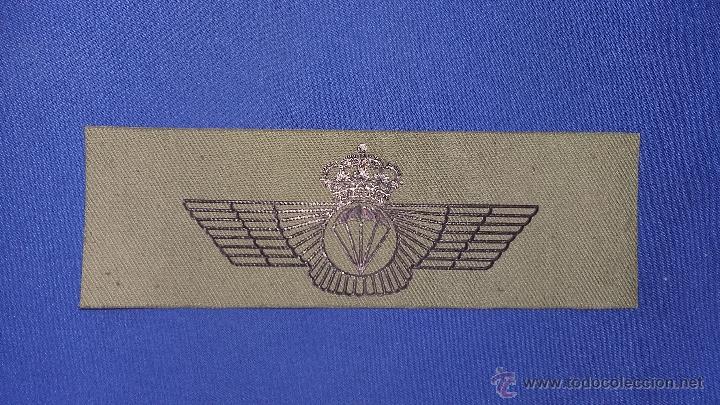 Now I have to question the color of the name badge on the left breast which, IIRC, I added.

I dont think the shoulder patch should necessarily match the wings , but the wings should match the blank nametape.

I see you found FobanX's post despite my misdirection..

Juan also has posted some interesting photos of a spankin' new set he was selling. And I should have bought..

That set had no shoulder patch or wings; only a blank nametape. That is how they came from the factory, I believe..

Yeah, I know what you mean about matching. In theory, I think, the badges could be anything in any spot. Just because there was overlap around this time and soldiers used whatever they had on hand.

Interesting to think that the name patch was factory sewn on. I think you're correct. I looked at mine, which is unissued, and I didn't put it on and the thread seems the same as the rest of the uniform. Unusual for a Spanish uniform to have that on right from the factory. In fact, this might be the only example of that.

Hmm. Maybe I'll put the original dark olive badge on there after all. The lighter one I bought for sure can be paired up with something else.

The question is if I should swap the Paracaidista badge from the lighter type to the darker type.

Soldiers the world over have used whatever was available to them at the time for just about everything, so if  patches really dont match perfectly, it should not always  be a red flag..

Do believe the nametape  came sown from the factory on these uniforms specifically.
I believe these uniforms were the last of the amoebas types and were  trial/experimental lightweight uniforms that were not accepted, nor extensively used.

They remain relatively rare compared  to most other Spanish uniforms and have not been documented in use ( except for the photos I posted of those merry men in the snow ).

The third type with the 47/56 features I have never seen except for the one I traded off a few decades ago..  Yes, I wore the crap out it when I was younger, and it was in bad shape when I traded it, but you bet I wish I still had it..

I would use a para wing that matches reasonably well with the nametape.

Some countries are more likely to "misuse" badging than others, and Spain is one of them!  Partly because they changed badging several times in quick succession.  However, what I am trying to avoid is the generally never OK situation where a later badge is applied to a uniform that was out of service.  The darker olive type is definitely later.  Looking through pictures I see one with the older type jump badge on it, but who knows if that's original to the uniform or added later.

It would help to know more about the 2nd Model uniform itself, but as you say it's largely a mystery.  Mine has official acceptance stamps in it, so for sure it was issued to a unit even if it never was issued to a soldier.

My 3rd Model (French type) set doesn't have acceptance stamps in it, though the size stamps are identical to the 2nd Model and one of the few other examples I've seen has acceptance stamps the same as my 2nd Model ("Roger de Lauria").  Both 2nd and 3rd Models are made from the same cloth and both appear to have the name cloth sewn on.  My guess is the two uniforms went to Roger de Lauria for trials and didn't get very far in the process.

I'm fortunate to have unissued (or nearly so) examples of the 2nd and 3rd (French) types.

Nearly every  patched Spanish uniforms I ever saw looked not quite right.
But as you said, there were several types of different patching changes going on in a short period.
Most significant, as we know, was the switching of crown image on all insignia after Franco's passing. 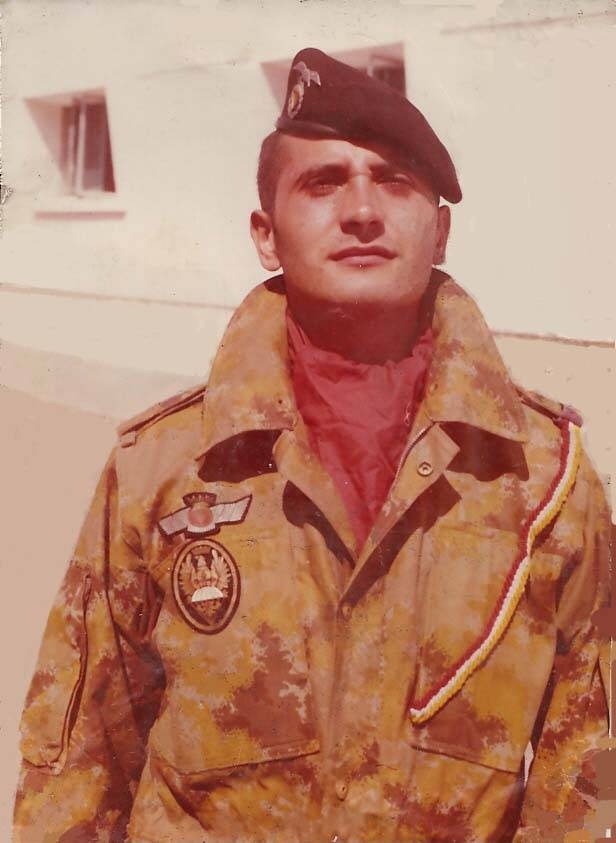 Having said all that, I'd love to see you do a post on the  2 uniforms you are very fortunate to have..

I've seen a couple of Spanish guys who say this isn't a picture of someone in service. I don't remember why, all I remember is they don't like this picture. Though that doesn't diminish your point that Spanish badging has a lot of inconsistencies and/or poorly understood reasoning.

I've been meaning to try and pull together all the different badging concepts that went through the 1980s and into the 1990s. Off the top of my head I think there were at least 4 or 5 major experiments, some of which were radically different.

I think the uniforms were made in the 1980s when camouflage was being trialed again. The idea, I think, was to once again have the Paracaidistas wearing a unique uniform to set themselves apart from the rest. Trying out their traditional camo makes sense. But that's just a guess!

At one point I did upload pictures of the two uniforms, but PhotoBucket killed that. I'll try to get them up again sometime soon (I don't know if I still have the original pics). Getting pics of the rest of my Spanish uniforms could take a while 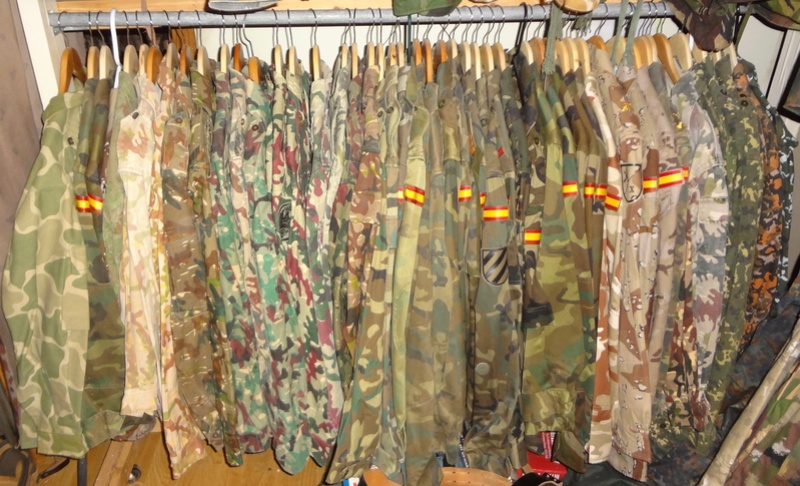 Holy cow, are there any left in Spain?
CollectinSteve

Wolverine wrote:Holy cow, are there any left in Spain?

The nuts things is these uniforms are all unique, though there are some that are only different because they are badged for Legion. I've managed to collect most of the late 1980s and early 1990s almost yearly uniform modifications. There's three commercial sets in the mix (far left and right most two).

There sure were a lot of different Spanish patterns over the past 40 years..

A lot of them found their way to the US.

Once one  starts to collect Spanish uniforms, one  never really stops looking for Spanish patterns because there are so many possibilities..