I'm posting this uniform in the hope of gaining some information about it. I know it is Polish, and heard rumours it was a trial police pattern from the early 1990s.

It is constructed similar to the Airborne "US" uniform, however the jacket lacks the lower sleeve pocket and right sleeve pocket (only one sleeve pocket). It also lacks the poachers pocket with two zippered openings. There are remains of red and blue thread on the sleeve pocket from some sort of insignia.

The trousers are the same as the 4 cargo pocket Airborne "US" trousers, and have the knife pocket on the right side.

Neither items have any stamps, or if they did, they are washed out. Just the pictured tags. It looks post-communist era, and I've seen commercial factory tags like these on other legitimate trial pieces, so that does not mean it is just a commercial item. The size tags are standard official type used from 1980s to early 1990s.

Anyone have anymore details of what this interesting uniform is? 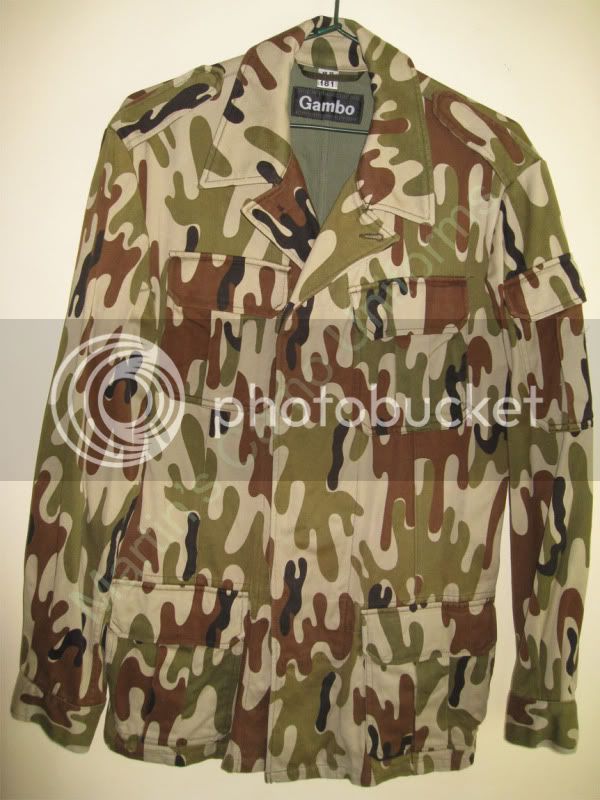 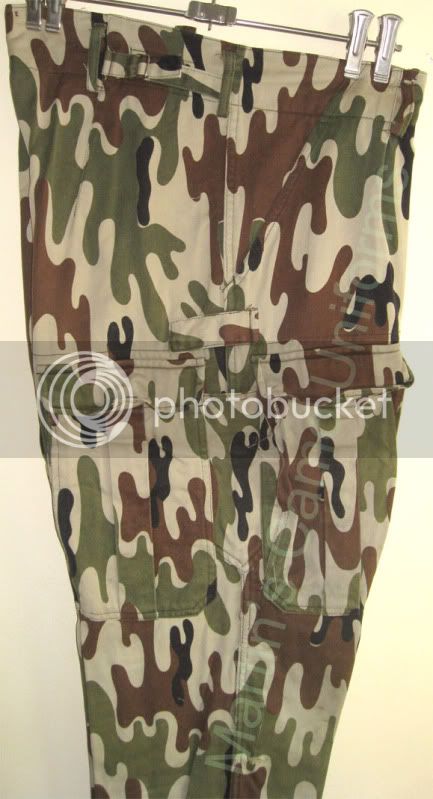 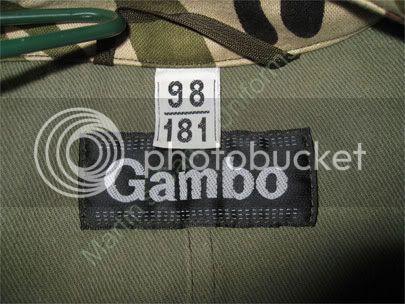 Name tag on reverse of collar: 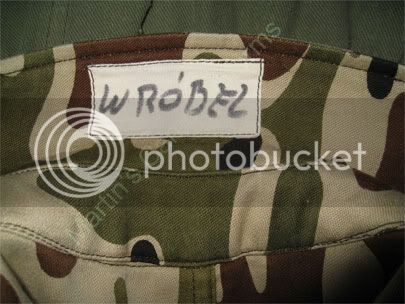 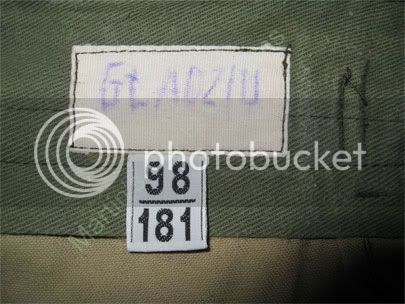 As you probably remember, I have the same uniform and a matching service shirt. I have only heard the rumor that it was experimental desert. Given the color scheme, that could be just speculation. I don't understand what a Police force would do with a uniform with these colors, so an experimental desert uniform makes more sense. But it is true that Army and Police uniforms share many features so it can not be ruled out.

There are no stamps or tags of significance in my pieces either. It does appear to have been "issued" as the names written in yours hint at.

Why this uniform uses a recolored limited issue French pattern is another mystery.

Whatever the story is with this uniform, it's certainly very rare!!

As for me it's police trial uniform. But the model is unknown (jacket looks like 4636 model and trousers like 4639 model). I think that it was produced between 1993-1997 (manufacturer label is a clue).

Thanks Steve and Abrakadabra,

Abrakadabra - did you just hear a rumour that it is Police related? I haven't found any evidence yet. No photos either. Would like to hear more information if you have any.

Steve, Is you shirt short sleeved and does it have any stamps or markings? Do you have any photos of it?
Martin

One more question Steve: Does your jacket also have only the one sleeve pocket?
abrakadabra

Well there are two things that are important.
a) is this uniform is for police or army?
b) is this camouflage was for army or (and) police?

Ad. a)
As I said jacket looks like 4636 model and trousers looks like 4639 model (both were not used by army). If this uniform was manufactured for army I think that it would be 4643 model. So i think it's for police.

Ad. b)
It's hard thing. Jacket has "Gambo" manufacturer label. As i now manufacturers labels was not used in 1992 (i saw jacket also made by Gambo but without manufacturer label). So this uniform was probably manufactured 1993-... . At the end of 1993 "pantera" goes into mass production so i don't think that this uniform would be manufactured for army (if it was) by this time. There is another possibility that this camouflage pattern existed earlier and was intended for army. Trials of new camouflage (uniform) patterns always take a time and maybe this pattern was a competitor to "pantera" for a new army camouflage pattern in early '90. Mass production of "puma" stopped in 1991. What was happening in 1991-1993 those are questions which i'm not able to answer.

Hope it helps a bit.
Sorry about my english but i'm a bit tired.
CollectinSteve

1. Only 1 pocket on the left sleeve.
2. Gambro made the jacket
3. M Collection made the lightweight shirt
4. No manufacturer's markings in the trousers

Here is another interesting fact. On the collar of my jacket there are stitch marks for rank that was removed. The rank is the standard collar rank of the Polish Army. But the Polish Army did not wear collar rank on their field uniforms, only their dress uniforms. Correct? Incorrect

I have a picture of an experimental Pantera jacket with camouflage collar rank. So it would seem that around 1993 the Polish Army was experimenting with collar rank. It makes me sad that this experiment was abandoned. I really like Polish collar ranks!

OK, so let's tie this together with abrakadabra's information...

Although the cut of the uniform is closer to police than Army, I can not understand why the police would be interested in a uniform with these colors. Can you imagine Polish police in this uniform? Can you imagine any northern or central European police in this pattern? I can not. I doubt even Italy, Greece, or Spain would wear uniforms with these colors. These colors are best used for a desert environment.

So why would this uniform be similar to an police uniform if it was for the Army? Because Gambro only had the patterns for police uniforms? That's a possibility.

And are the trousers really like police trousers? I do not have many examples, but I don't think my police and fire trousers look like this.

I really wish we could find some pictures! 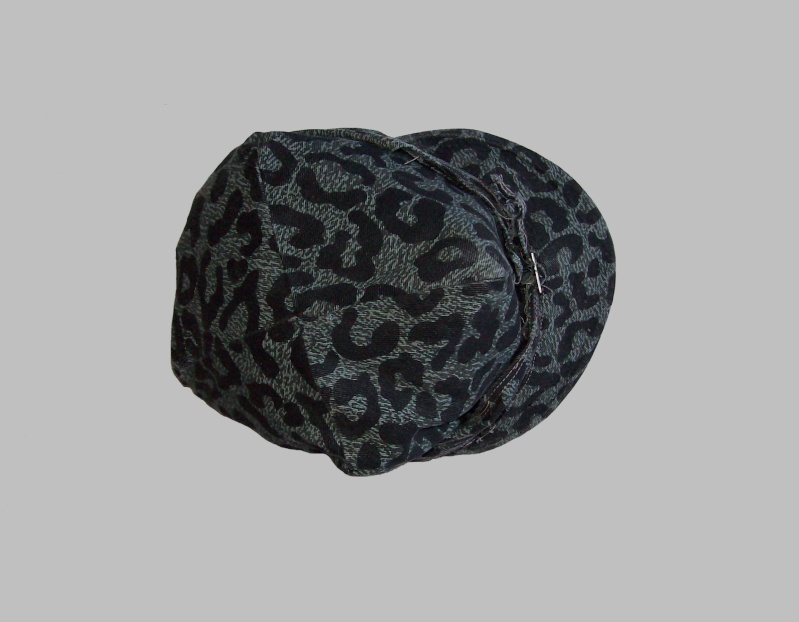 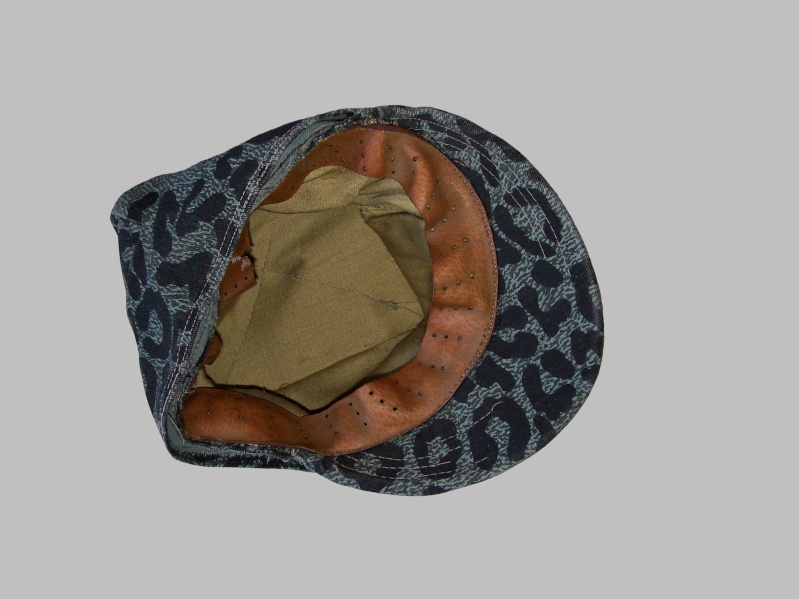 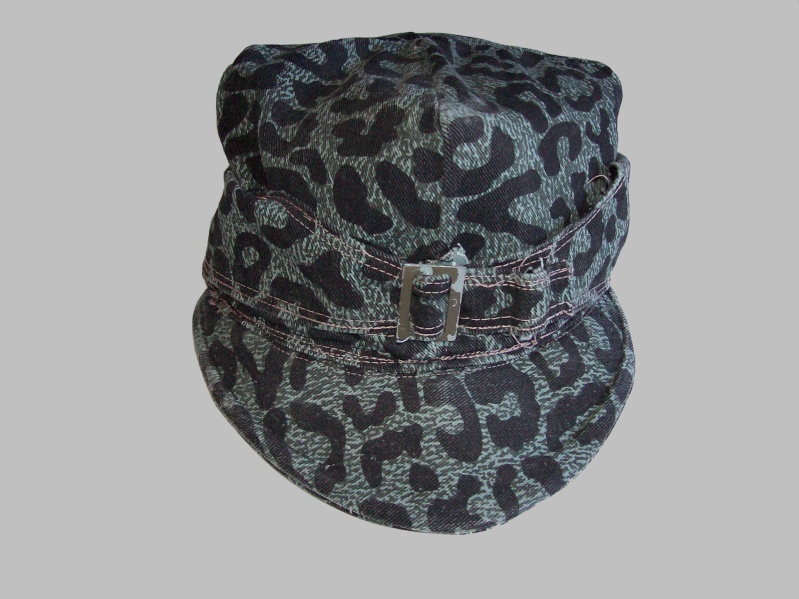 I've got trousers like this. Or is it a backpack? I forget! Anyway, I've heard two stories:

1. Firebrigade
2. "Boy Scouts" (I don't know what the Polish name for this sort of organization is)