ripcord wrote:After looking at the slant pocket type uniforms in my collection, I am now more than certain there are not 2 versions of that uniform.  I am confident that the appearance of differences are only due to fading and maybe fabric differences..

heh. That post of mine was from 4 years ago and I honestly don't know what I was referring too

However, I did check my 1990s uniforms just now (the Italian ones are thankfully available) and can confirm that there are some slight production variations.

1??? (no labels) - slash vent holes under armpits and in crotch. Direct embroidered BSM logo on left chest pocket flap. No metal grommets, velcro backings appear to be added after manufacture. Inside cloth has major color bleed.

1994 - same as above except metal grommets in jacket pocket corners and no armpit vent holes of any sort.

1996 - same as above but with direct embroidered BSM logo on left chest pocket flap and cloth has almost no color bleed on the inside. Velcro appears to be factory applied.

1997 - same as above but without BSM logo. Velcro definitely factory applied.

The 1997 set came from Sportsmans Guide ages ago and I probably had more than a dozen go through my hands. I've got two sets in hand now. I also had a dozen or so used 1990s sets from which I plucked my 1994 and 1996 sets from. The amount of variation in the camouflage colors, due to production variations and wear, is pretty huge.

Anyhoo, I definitely agree that all four of my sets are single uniform type (1st Model) that comes in Early and Late variations.

Such a beautiful pattern

Such a beautiful pattern definitely applies.   I was recently doing a bit of research on  MM/SM uniforms, so I figured I'd share..    There is a lot of info on these patterns, but not all of it  helpful.

At some point  I thought the last type uniforms were of two different hues, if not different colors .   That is not the case.


I suppose the many variations in patterns of 1st type uniforms led to the standardization of the pattern which  appeared on  second type uniforms around 2000.

The second type uniform is itself very interesting not only because it introduced the new universal pattern, but because it was a mix of old and new.

The jacket is basically a first type with a couple of changes . The bottom cargo pockets have been deleted, while the chest pockets are now straight  instead of slanted ( pockets are identical ) .

Besides the pattern now being on the inside as well, that is basically it.  The weird ( but cool )  back panel with cinching buttons of the first type is retained. I am told the trousers were identical to 1st type.

It is the last type that uses embroidered green stars at collarpoints   3rd. type have sown on stars that are identical to those of the rest of the Italian armed forces. 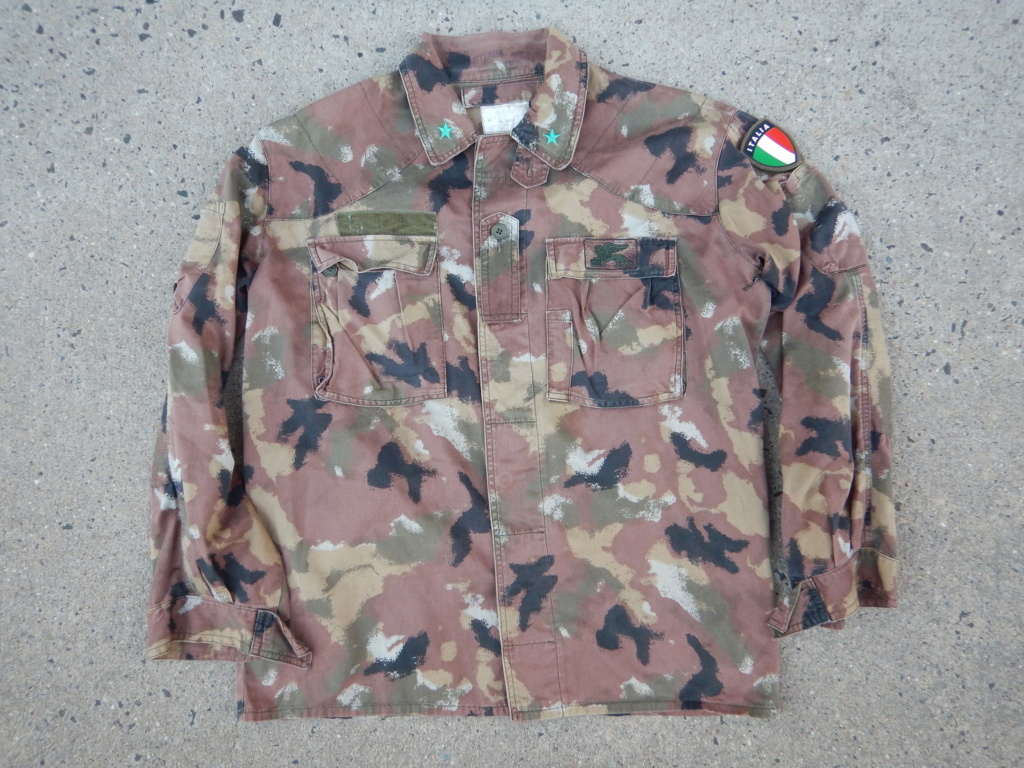 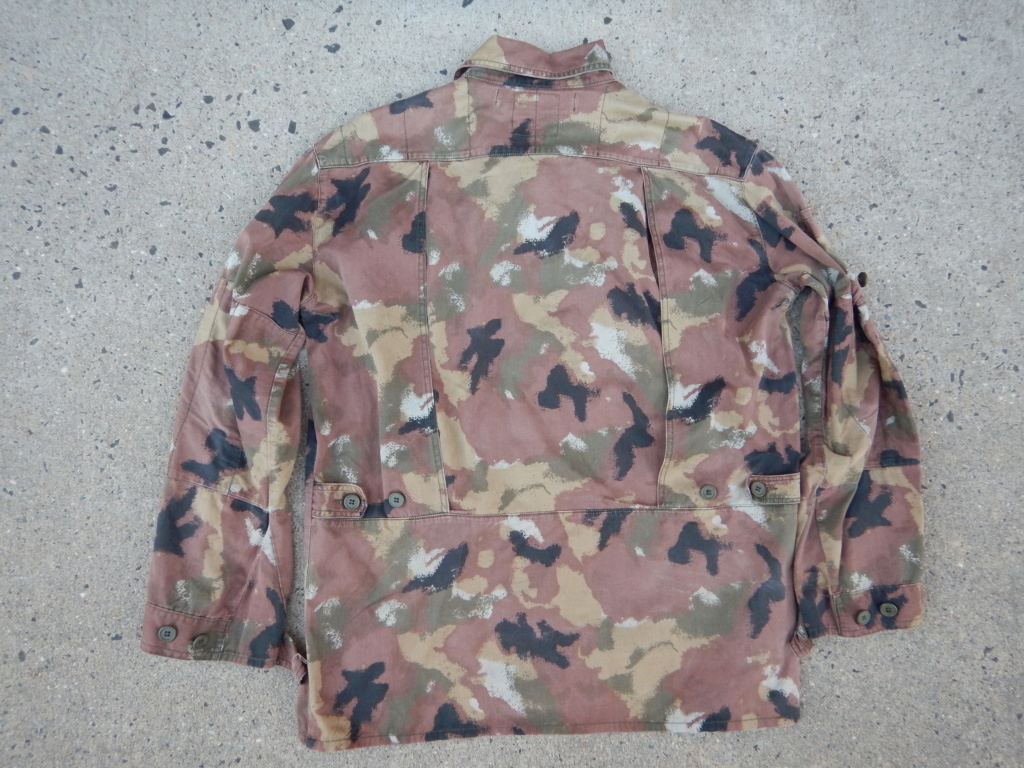 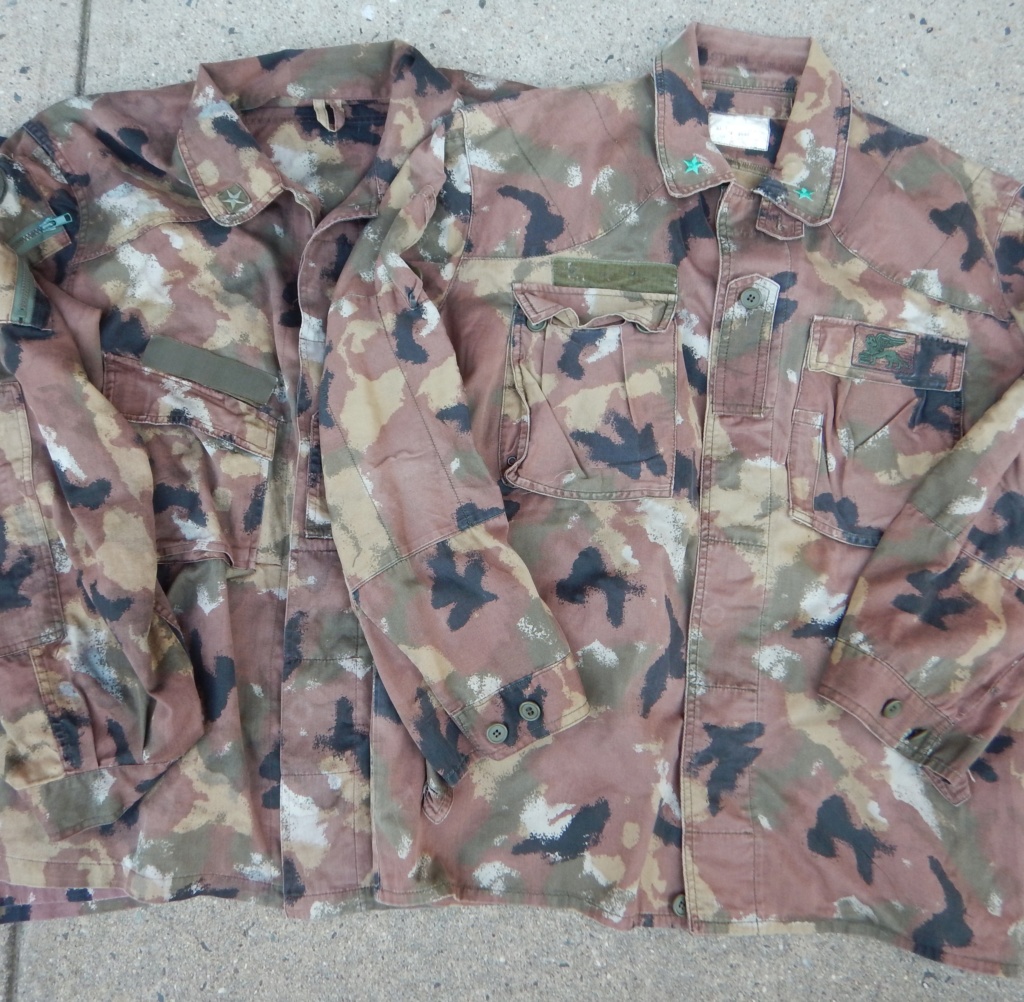 This was not easy to find as  trousers are rare in comparison to blouses.
Trousers were usually worn until unserviceable .

This type is the first to have an universal pattern  as opposed to the 1st type that was made in a few different hues. Also it was the fist type to have camo pattern on the inside as well as on the outside of the garment.. 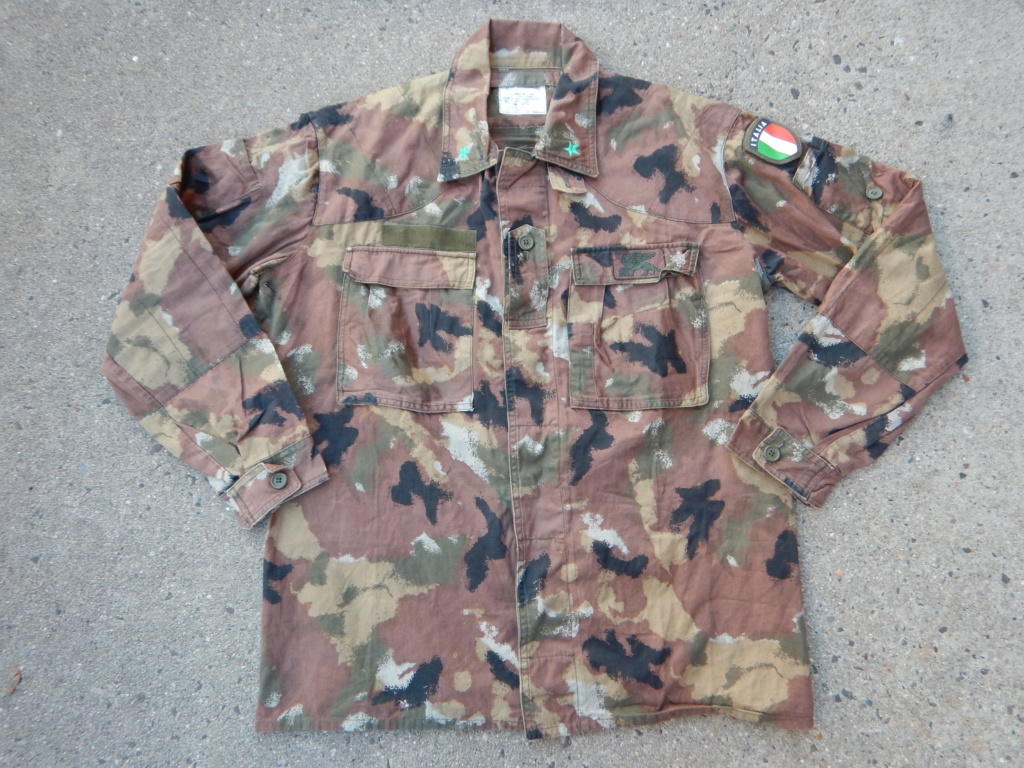 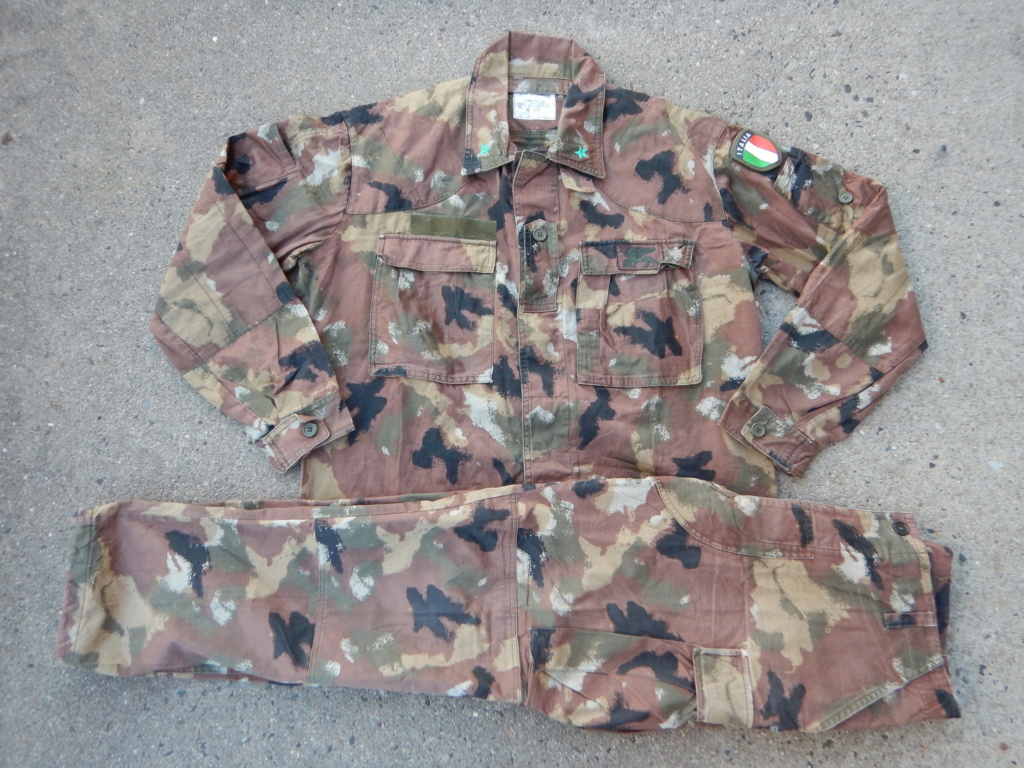 Here is a well used '97 dated set.  It  is what many call the Mediterranean pattern and also have seen it referred to as Beach pattern.

These uniforms faded rather quickly ; many were used until close to unserviceable conditions.

The blouses pictured are of the same pattern.  The one on the left has been washed once.

I believe this pattern , or hue of this pattern, is the last and most common of the (1st ) type. It is certainly the most documented. I've seen examples of this pattern/hue with contract dates as late as '99. 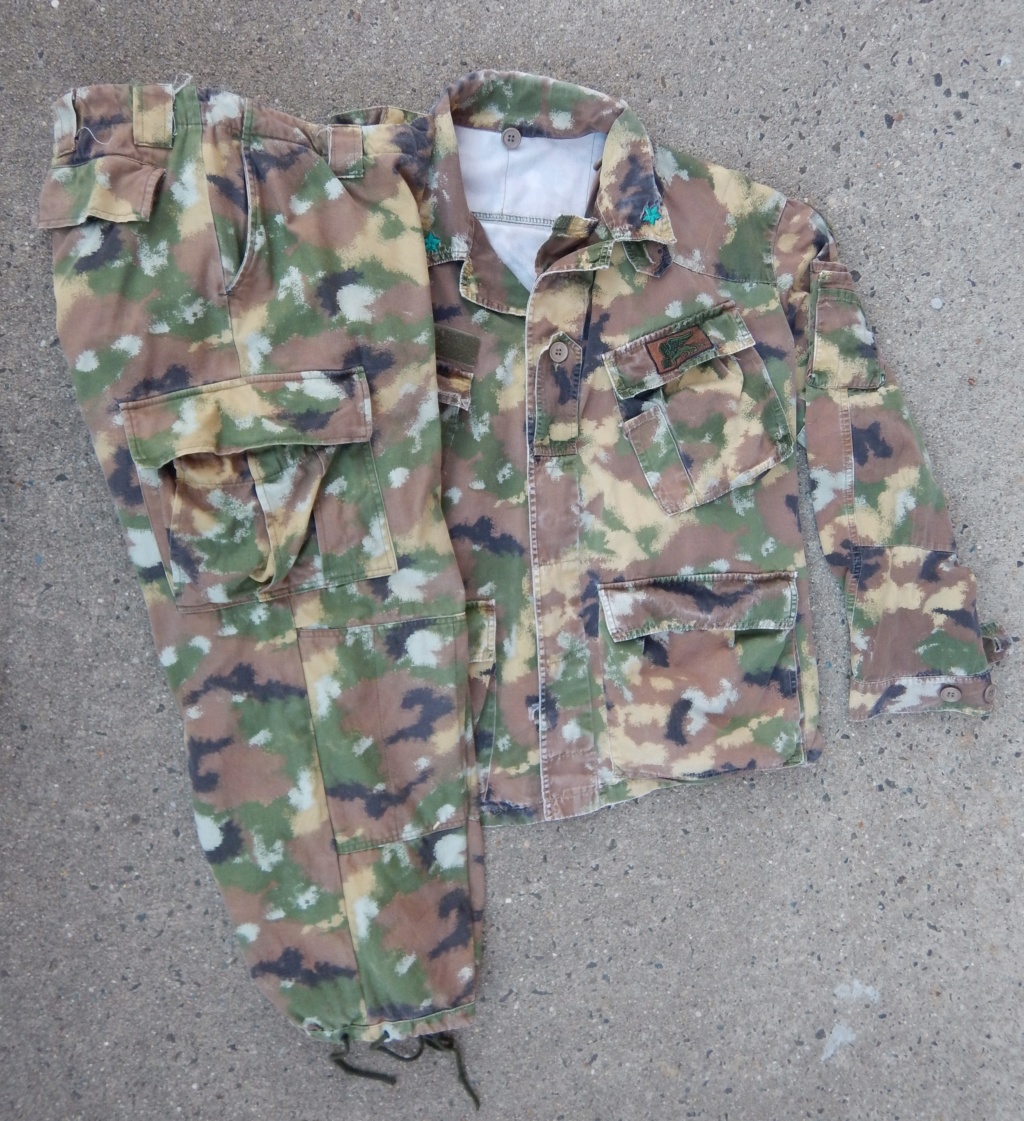 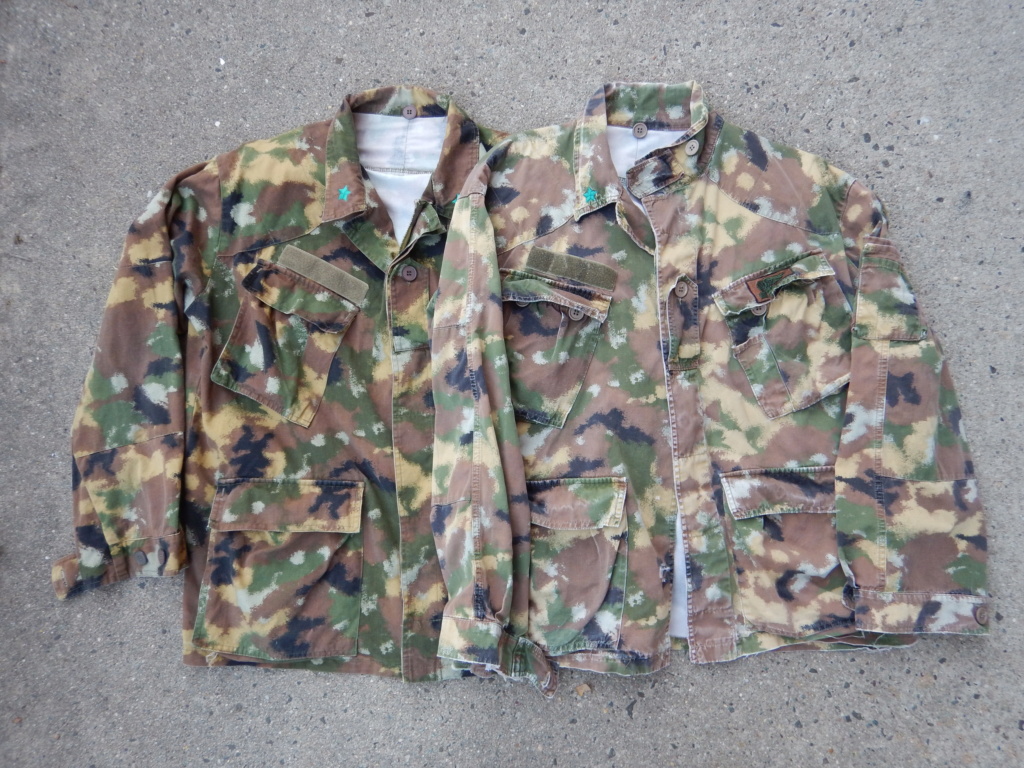 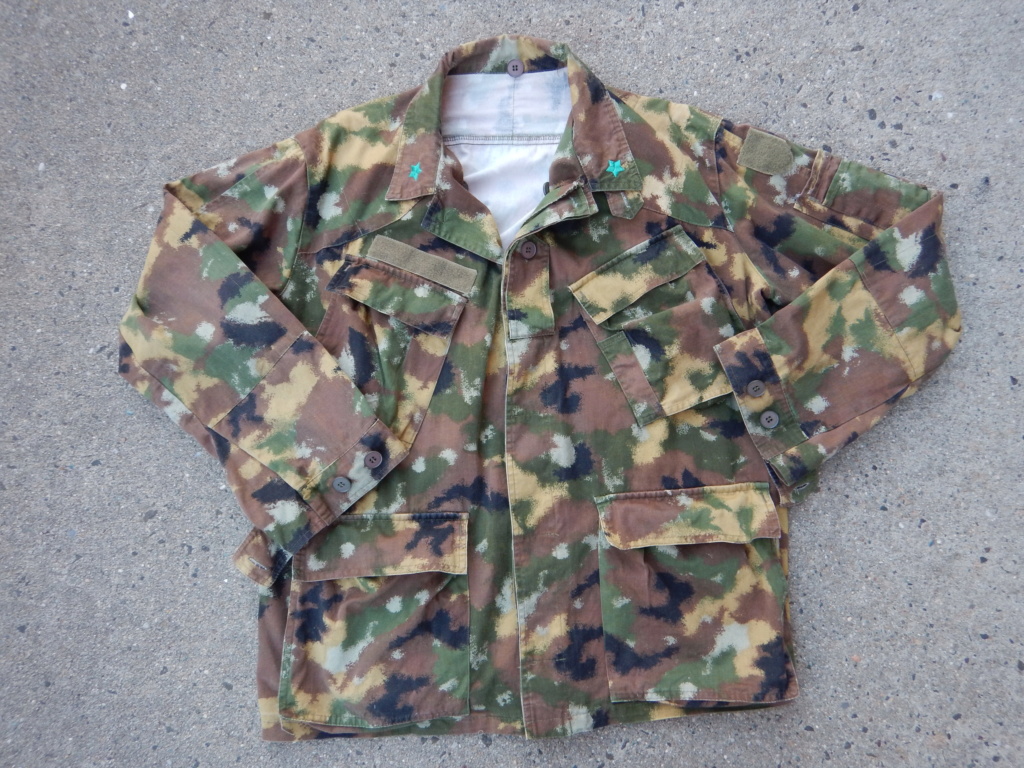