Here's the story.  My sister picked this up at an open air market in Madrid during the summer of 1991.  In the late 1990s I was involved in a trade which ended up in my parting with the set.  After that, I lost track of it.  Then last week I had the opportunity to paw through a collection of a long departed camo warrior who was a common friend of the guy I traded to and him.  Sure enough, there's my set sitting there!  Which was great for me because I've always regretted letting it go.

Many of you know that I'm pretty knowledgable about Spanish stuff, including the exotic stuff.  But this one has me puzzled.

In many respects this uniform is identical to M68 "Garbanzo" solid color standard military uniform, except in the early experimental ERDL/Woodland type camo: 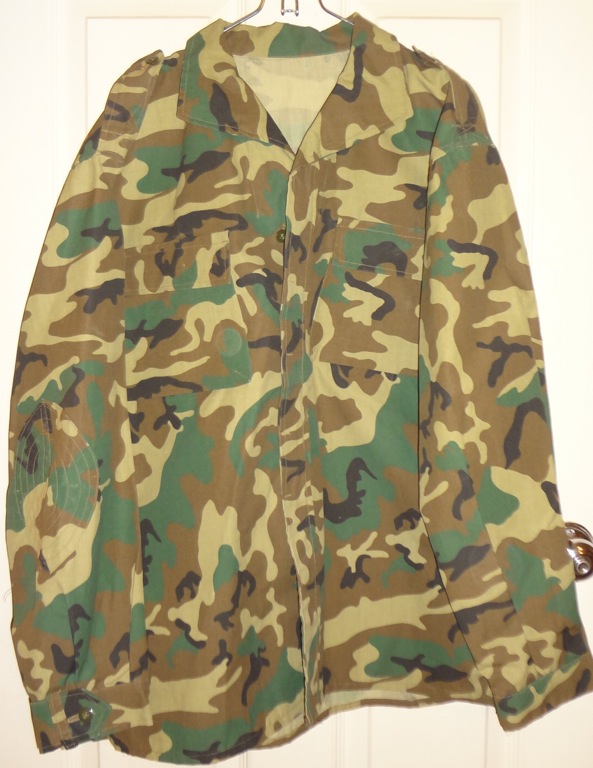 It's even got some unusual features with the pockets.  Specifically combos of buttons, button holes, and velcro I'm not used to seeing: 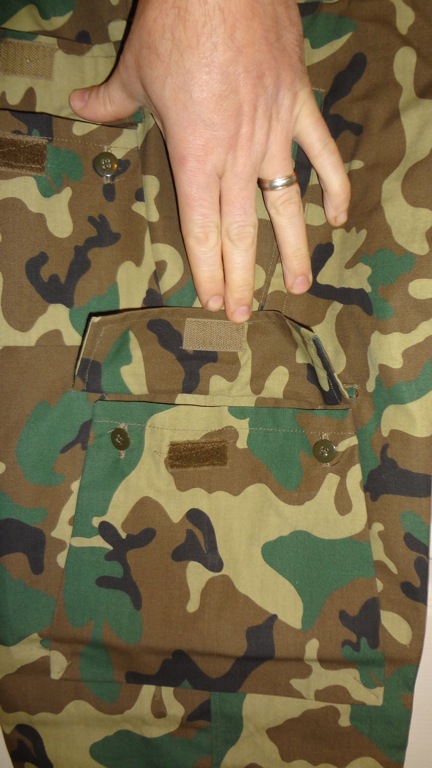 Now, here's why I'm a bit confused by this.  The cloth is utter crap!  It's very thin and has a high polyester count.  It's unlike any Spanish item I've ever had.  Normally that's a red flag that this thing is commercial.  However, it has tons of features which no commercial uniform would have bothered with due to costs.  The M68 and early Woodland uniforms were overly complicated and, in fact, most of the features were dropped when they adopted a standard camouflage uniform around 1988.  Cheap cloth and expensive tailoring is a new one for me! The buttons are also very similar to military type used on the experimental Woodland uniforms that appeared in the early 1980s.

This set came with a matching hat in M68 style and a better quality coat in the same design as those used by Paraciadistas.  Unfortunately the smock was sold on eBay after my trade and it's long gone.

For years I've struggled with my memory of this uniform.  Commercial or some sort of prototype?  Now that I have it back in my hands again I am leaning towards prototype due to the feature consistency with a military items and inconsistency with commercial items.

Anybody have any educated guesses as to what I have?

I have a Condisa Uniform with that pattern ( similar, light colours predominating) dated in 1985. It was given to me by a boel member who received it in that time. Asked him about its use and told me that although some uniforms were given the existence of stock available on rocky patterns and boscoso ones in 1987 made the use of that uniform was not a succes.

Your unifor looks like in some details like mine but other units around those 85 moments of transit to PLAN META made for sure a load of variations in those uniforms. There are differences among them, the ones I have seen from 85-86 use to have elastic enclosing in legs, yours has typical straps of late models of Nato uniforms.

Yours has no flag in arm but not the 70´s pocket in it...2 bottoms and one velcro stripe, others have 2 velcro stripes and one bottom....variations and more variations.

In my not an expert opinion you are owner of a limited edition of an aerly NATO Spanish uniform around mid 85.

I missed your post until tonight! I think a very late "thank you!" is better than nothing, so THANK YOU

Unfortunately this set came with a jacket like the M61 Rocoso. It was not made very well, as with this uniform, but now I think it probably legitimate. The guy I traded it to sold it on eBay for a large amount of money. I do not know who bought it.

This is one of the reasons I decided to not trade or sell mystery pieces. I am very lucky that I got the uniform back!