I bought these from someone in Poland along with two hats. I do not know what to make of them! I'm sure they came from the same source within Ukraine and they appear to be factory, but that's impossible to say for sure. None have markings of any sort other than two sets having a black label with a size letter on it.

These could be made for Airsoft guys for sure, though I would expect tags in them if that were the case. They also don't "feel" like anybody intended to sell these as they feel too "cheap". Chinese stuff is way better quality. All uniforms share the same quality of construction, which is to say it's decent but the cloth and stitching wouldn't hold up well in the field.

There are basically two cuts:

1. Similar to standard current issue Ukrainian uniform. Rear pockets of trousers are "dummy" (just the flap). Elbows and knees have square reinforcement, the seat standard round. Trouser hand pockets are the unique Ukrainian type, leg pockets are ACU style with buttons. The Ukrainian and NZ/Hyperstealth uniforms are in this cut.

2. Similar to Ukrainian style, but pocket flaps are squared off, arm pockets bigger, trousers have standard hand pockets, and no rear pockets at all. Leg pockets are simple expandable patch pockets (similar to Bundeswehr type). Elbows have oval reinforcements, trousers ACU style velcro pocket knee reinforcements. Both elbows and knees have Danish style shaping to the bent position. The seat is a strange angular reinforcements. The A-TACS and green digital uniforms are in this cut.

Anybody know anything about them? I've not seen a single picture showing these in any way shape or form. 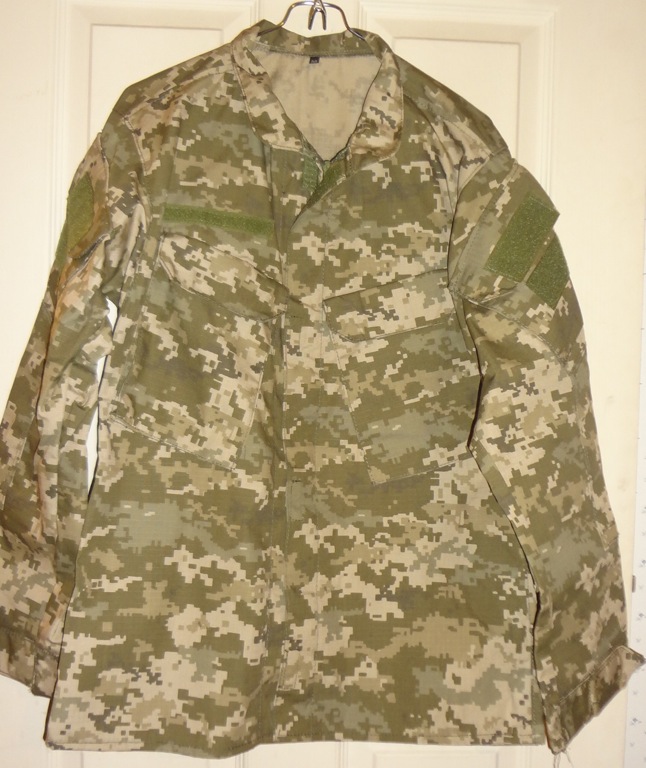 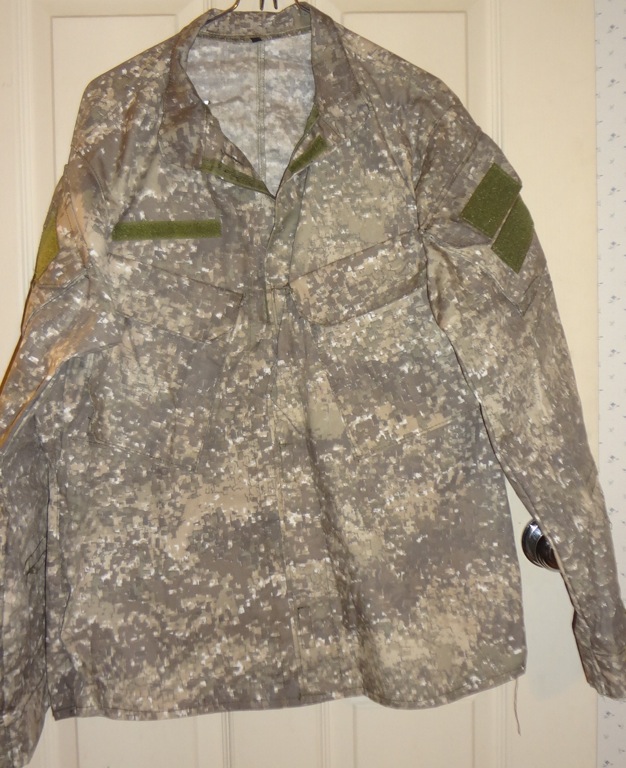 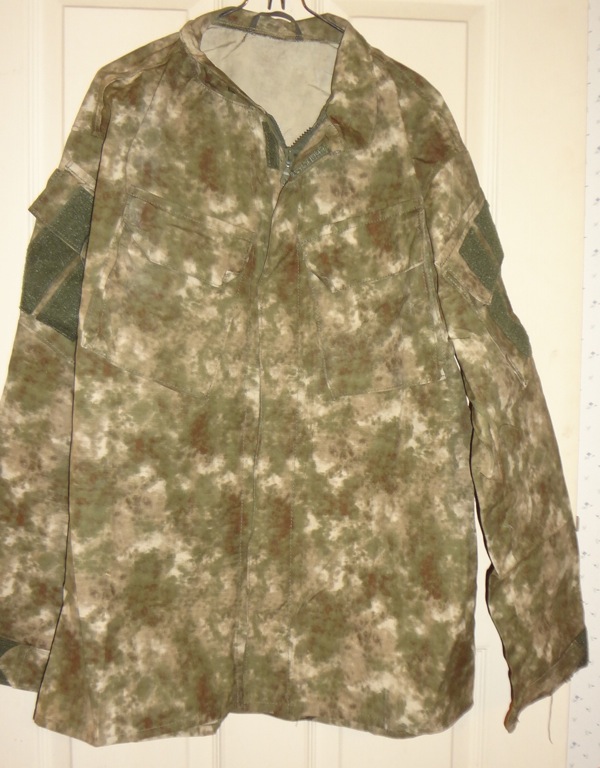 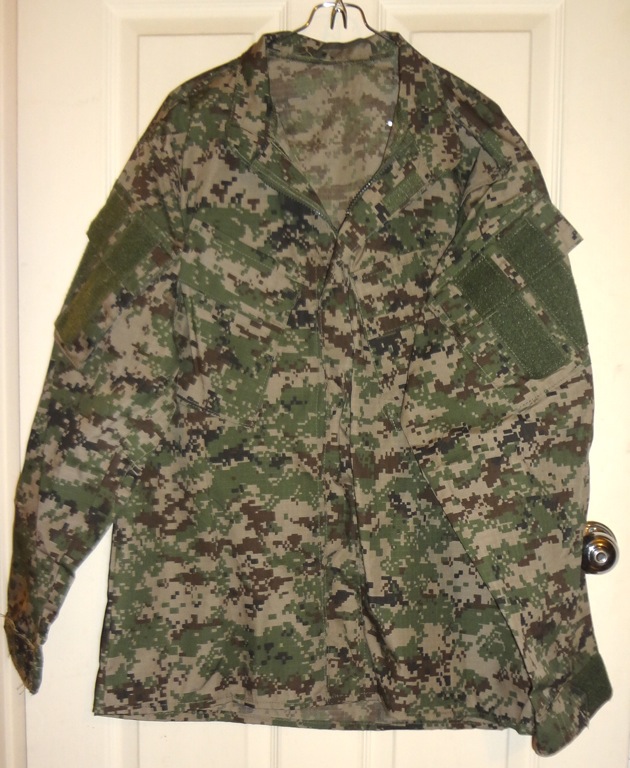 The 2nd set looks very much like the NZ Army MCU. Im sure its not but......
CollectinSteve

Before the war started Ukraine was actively pursuing a new uniform. They trialed A-TACS, Multicam, and some domestic patterns (Jaba). But these uniforms were definitely not part of those trials. And if they were all made at one time then they were made within the last year and a half because that's when Ukrainian digital started showing up.

looks like an arid take on the kiwi pattern. knock off prob
Necrolust

OK!  So #4 is pretty close to Serbian or Bulgarian. I could not match the parts of the Serbian sleeve to my jacket or trousers, so I don't think it is exactly the same pattern.

For sure none of these, including the Ukrainian digital, is an actual field uniform of any nation.  So this leaves us with several possibilities:

I'm usually the first to assume #1, and I'm certainly thinking that is the most likely case, but the construction of these uniforms is really puzzling.  It's not too bad, yet doesn't conform to any standard construction pattern.  Usually when companies knock off something for the commercial market they use an established pattern, such as BDU or ACU.  Even the Ukrainian pattern example isn't the same as an actual Ukrainian uniform.

Hello, Steve and the other guys!

In my opinion these 4 uniforms are 100% commercial and sewn by Ukrainian small private enterprize(s) from locally made fabric (as a variant, from Asian made fabric), while the design is just a copy of Ukrainian early MM-14 ("Малюнок Маскувальний зразка 2014 року" = "Camougflage Pattern of the year 2014").

Rear pockets of trousers are "dummy" (just the flap) brcause they decided not to spend the fabric for the pockets. These are just cheap imitations of the uniform.

Plrase mind the similarity of velcro patches on the sleeves of samples №1 and №2, on the one hand, and of the №3 and №4, on the other hand.
The last sample looks similar to Afghanistan digital camou: 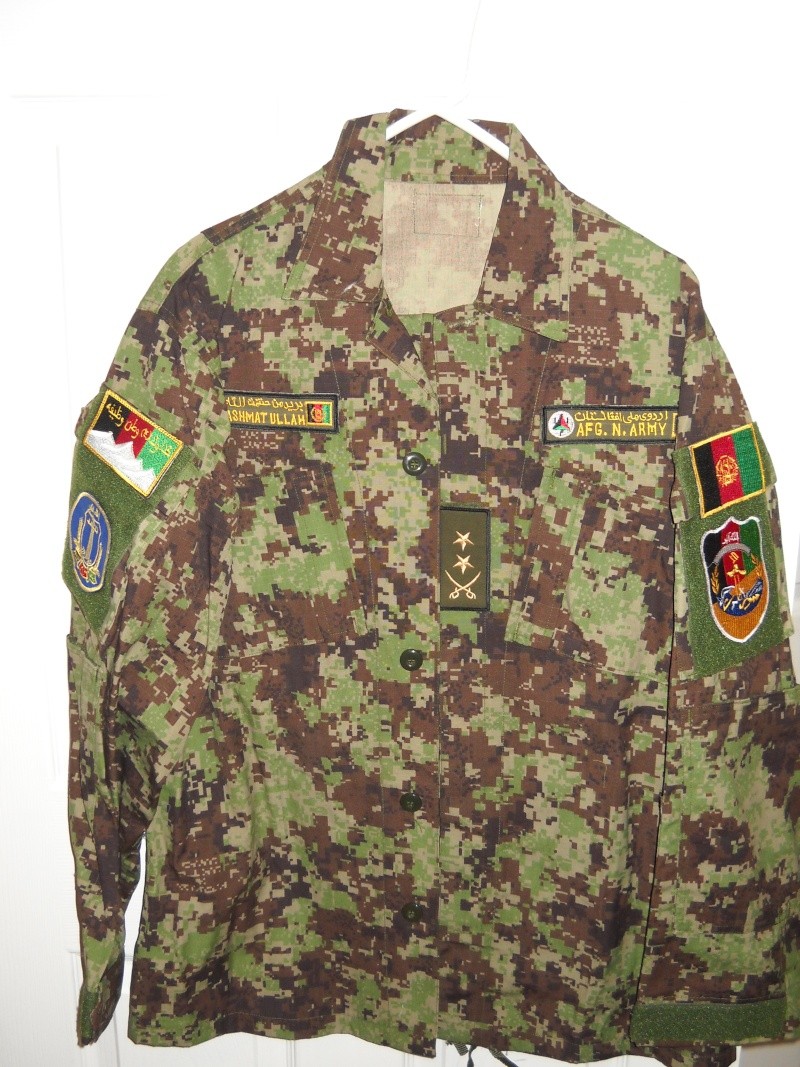 In Ukraine they also make military DPM caps (no ID markings) of UK and some other countries from the spare pieces of rubbed camouflage jackets, which are very cheap, and they try to follow the original designs.
mylle

Haydamaka wrote:
In my opinion these 4 uniforms are 100% commercial and sewn by Ukrainian small private enterprize(s) from locally made fabric (as a variant, from Asian made fabric), while the design is just a copy of Ukrainian early MM-14 ("Малюнок Маскувальний зразка 2014 року" = "Camougflage Pattern of the year 2014").

Yeah, that's what I assume. I bought them with this in mind, though I was hoping they might be something better than commercial. As we say, "no risk, no gain"

Rear pockets of trousers are "dummy" (just the flap) brcause they decided not to spend the fabric for the pockets. These are just cheap imitations of the uniform.

Yup, though some legitimate trials items lack these features because the government is not interested in spending money on the features. The UK did a round of testing a few years ago where the uniforms had no pockets at all :p


Plrase mind the similarity of velcro patches on the sleeves of samples №1 and №2, on the one hand, and of the №3 and №4, on the other hand.

Not quite, but you are close! The pattern used in Afghanistan is a Hyperstealth pattern. The same is true for New Zealand's pattern. The pattern I have is most similar to NZ's MCU pattern, but with more urban or perhaps arid colors.

So close! But I can't match any of the shapes, so I don't think it's the same. But definitely I think my example is inspired from the Russian one, perhaps Bulgarian. It is significantly different from the Serbian pattern, even though the colors are very similar.