Some Questions About Duby

Some Questions About Duby

Some time ago, I managed to get my hands on what I assumed to be a Duby/Mraky reversible oversuit. It was in very poor condition (faded, rips and tears, without the carry-bag, and with no hood or demigloves in evidence), so I assumed it had been taken and converted into montérky (work clothes), which I understand happened to quite a few of the old sets. However, something's not quite right with that hypothesis now that I take a closer look. 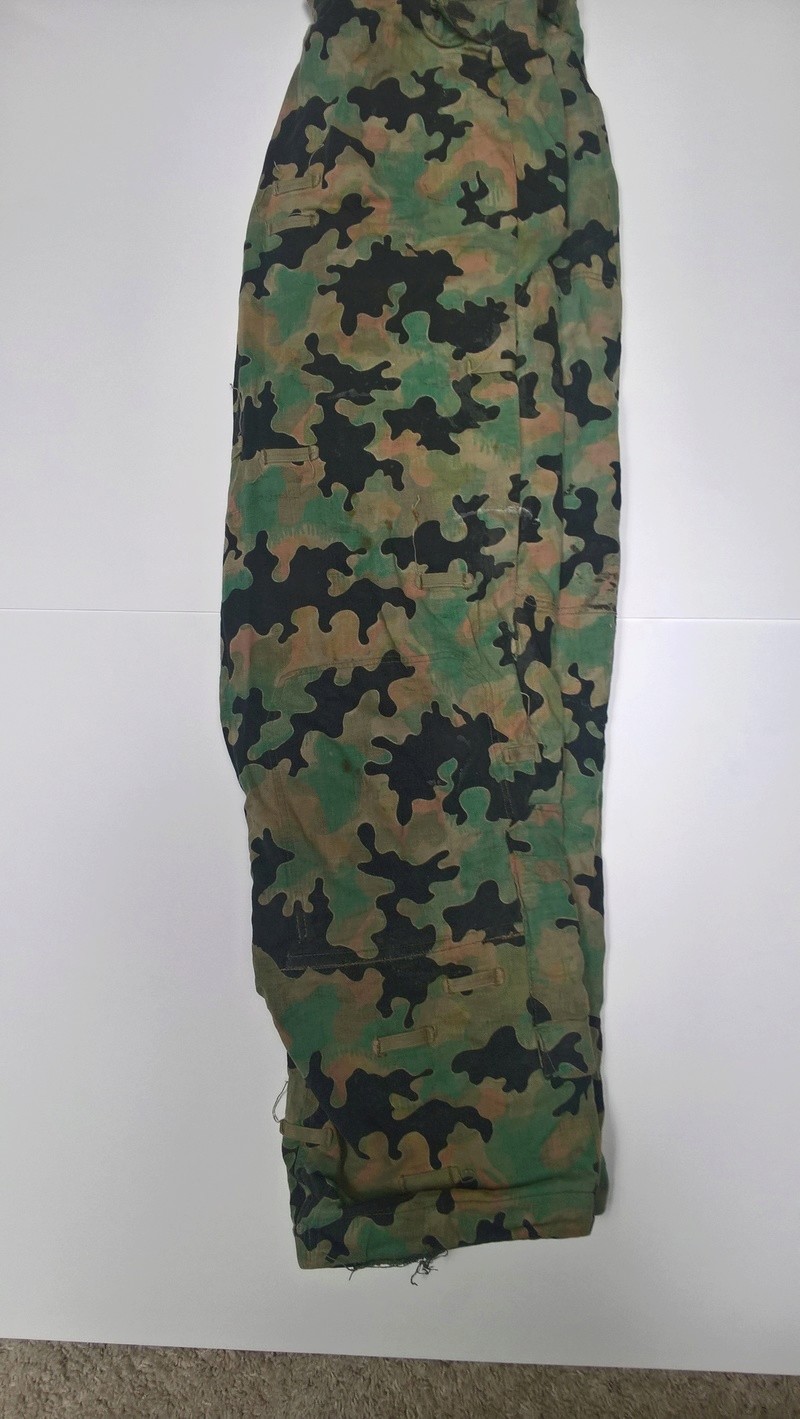 The Trousers are fairly standard, a few foliage loops are missing and there's a few tears. 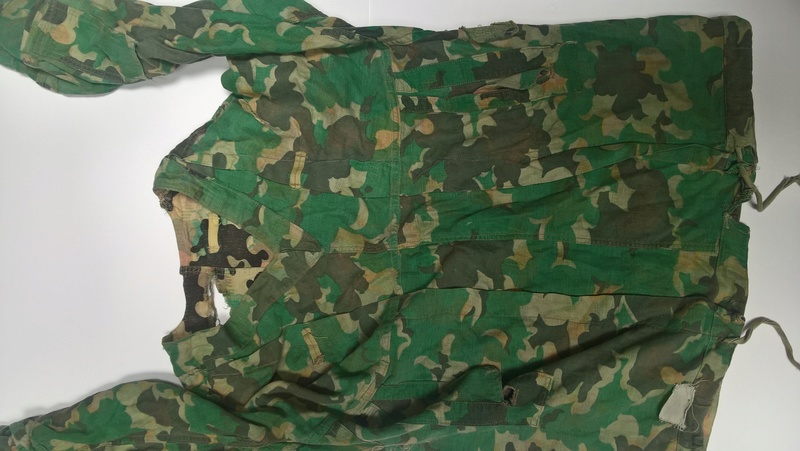 This is where things get interesting though. The deep V-necked collar I've seen before, on an old image of a rebel in Portuguese Angola. That suit also didn't have hood or gloves. Furthermore, there's no evidence on the collar that there ever was a hood attached that was later torn off, and the collar looks like a part of the whole rather then a later repair or addition. 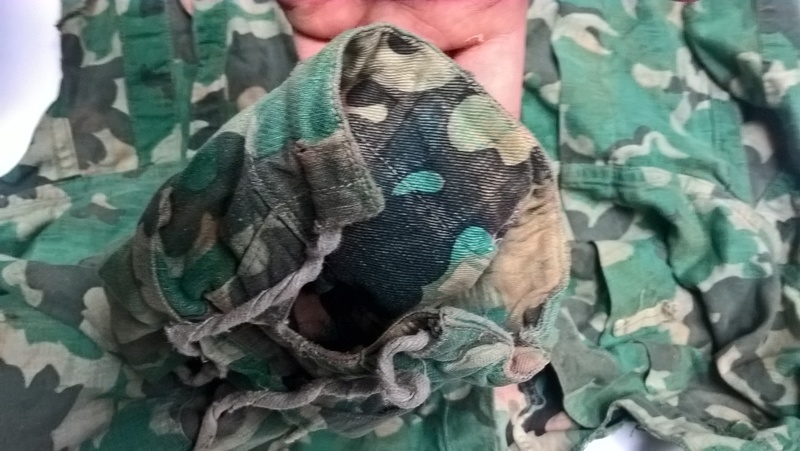 Likewise there is no evidence of the gloves having ever been attached and then removed. 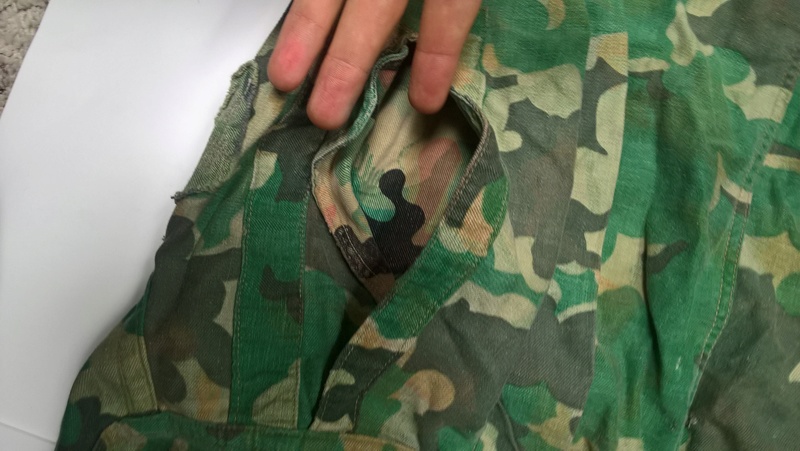 And the final nail in that particular coffin are the pockets - standard oversuit pocket slits meant to allow one access to pockets or pouches on their uniform under the oversuit. In all montérky conversions I've seen these would be sewn shut. So the end result is, I have no idea what on earth I actually have here. It's by all appearances original, but it doesn't match the pattern I'd expect. Does anyone have any further insights or information?
Martin

All suits seem to have the V neck collar. Also, on original suits, the hood is attached only by a small amount of fabric - about 5-10cm.
CollectinSteve

The thing that's probably tricking your eyes, Zrut, is the uniforms were not so much modified as they were reconstructed. They didn't just slice off the hood and mittens, for example, they added a collar and cuffs. Since the material probably came from the hood, and the uniform was worn a lot after reconstruction, it's hard to see what was done to it.

There's some variations in the modifications, however they largely follow the same basic design. For the jacket the hood was removed and new collar attached, mittens cut off and cuffs added, chest pocket added, and usually the chest access flaps sewn shut. However, I've had several where the flaps were not sewn shut. Sometimes they modified the V neck opening with a flap, sometimes they didn't.

For the trousers, usually the legs were pinched to make them less baggy and the leg pocket attached over the new seam.

For the Leiber variant the green side is always the outside, for the Clouds variants the brown side is outside. There's probably exceptions, but I don't think I've seen one myself.

Yes, these were modified in numerous ways. I once owned evidence of an "official" Czechoslovak tailoring pattern on these types of oversuits, which is presented below. The modified suit was either re-stamped with the crossed-swords and date (59) or the pocket was formed from the storage pouch, which is where the date stamps were originally placed. 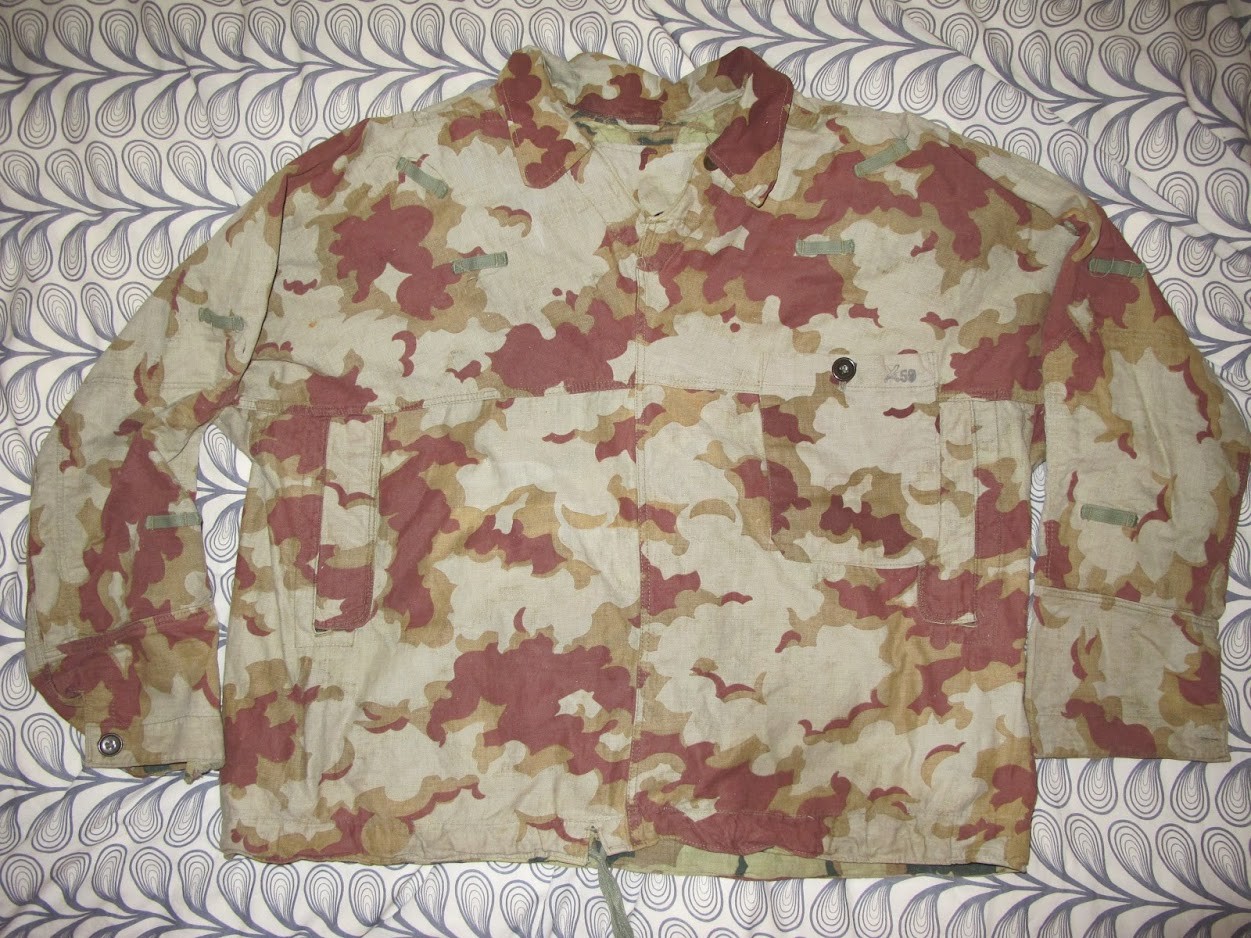 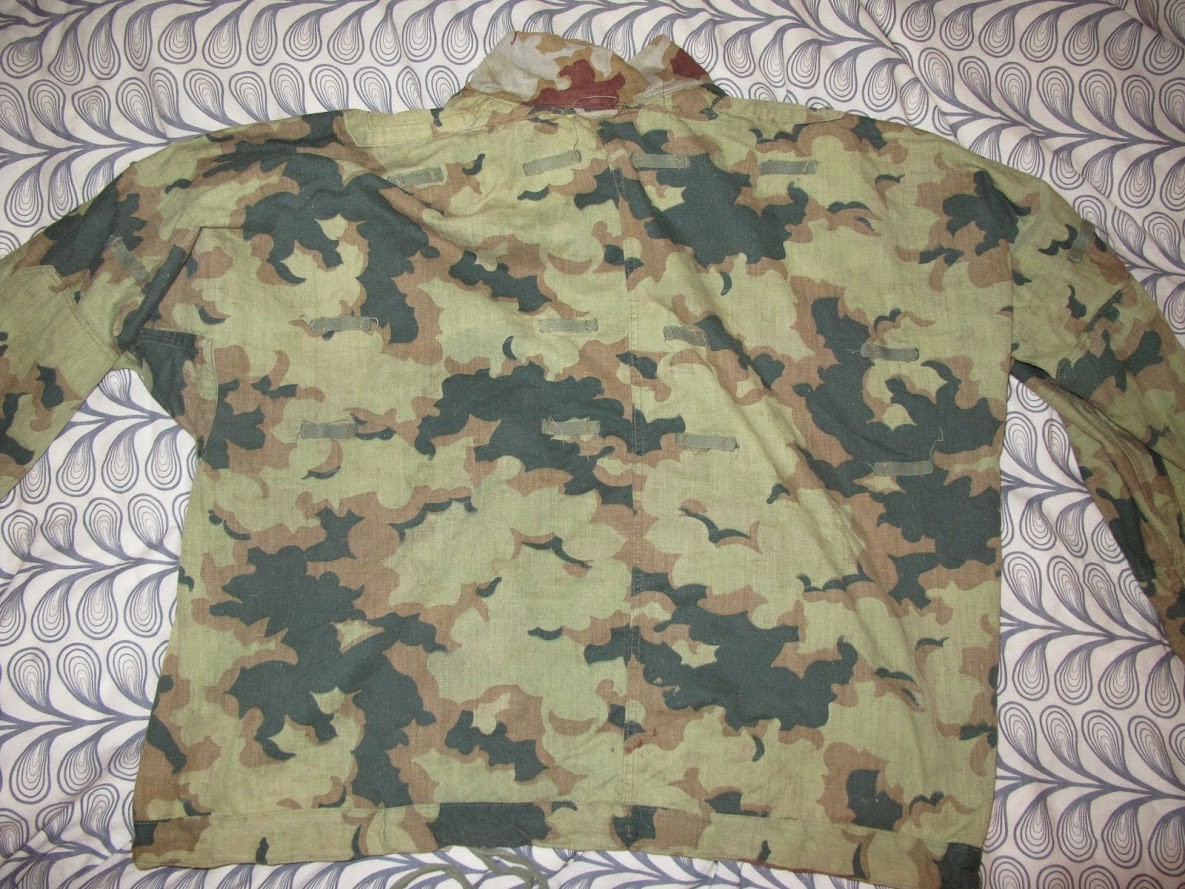 The suits or their modified remnants were definitely sent to allies and proxies in Africa, most famously, Danny Roxo, hunter and veteran in the Angolan civil war was seen wearing a "clouds" type pattern set extensively modified.

Czechoslovak marksman in a modified smock: 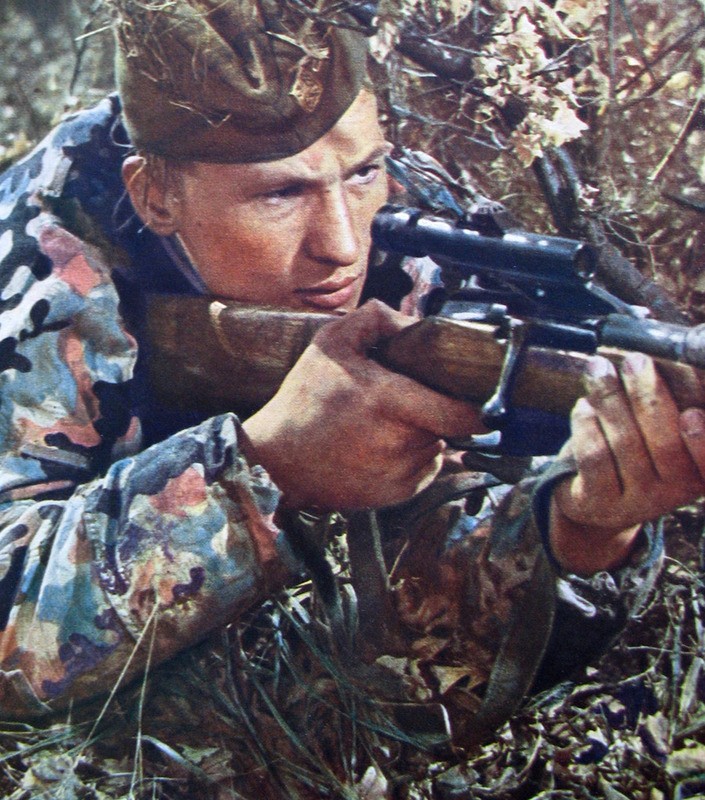 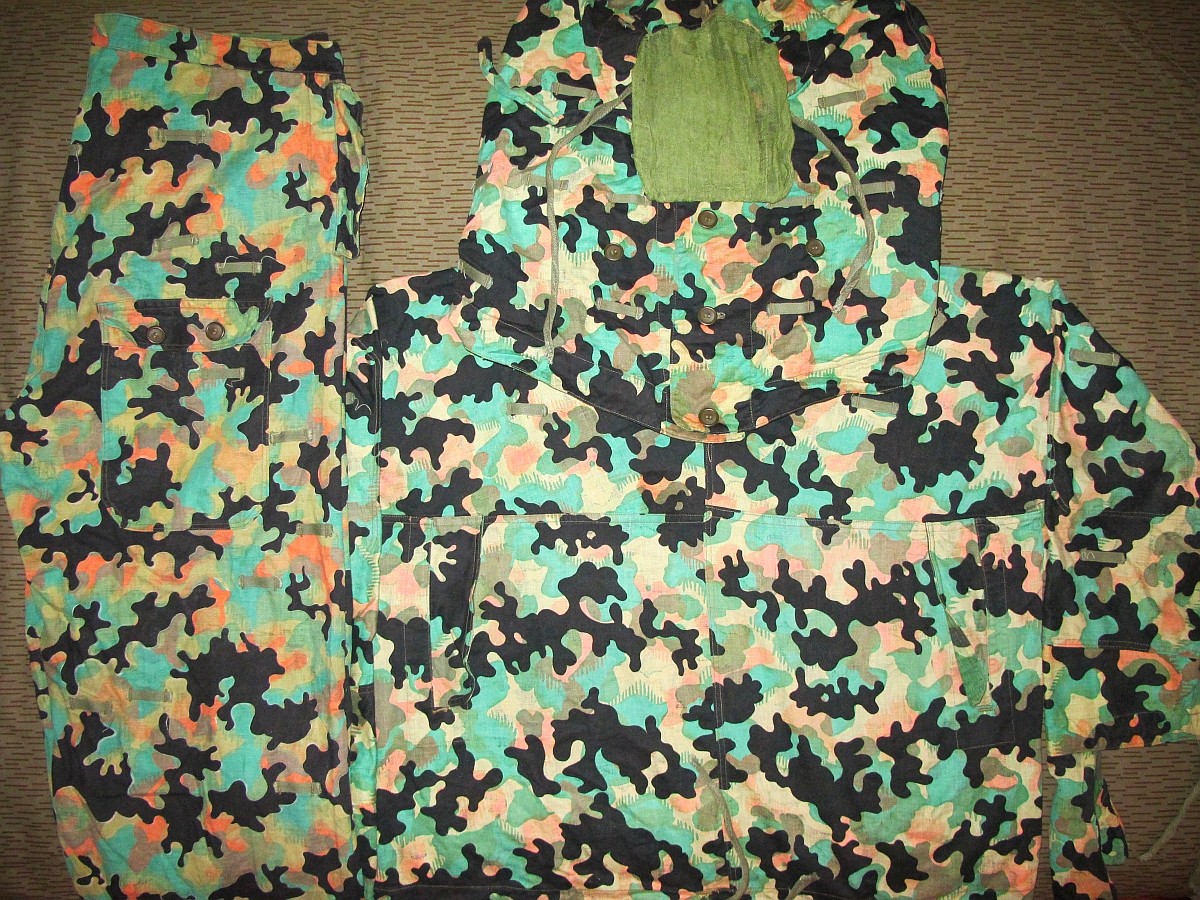 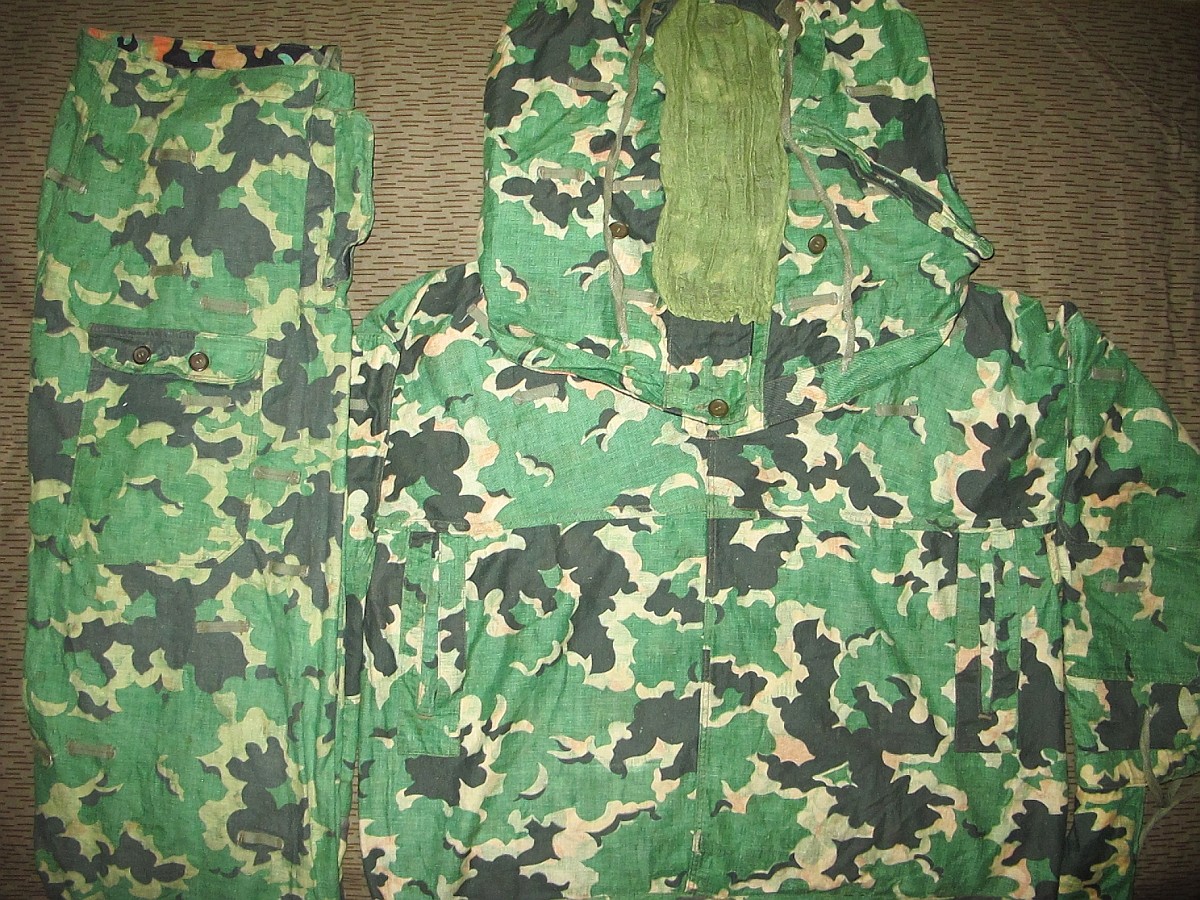