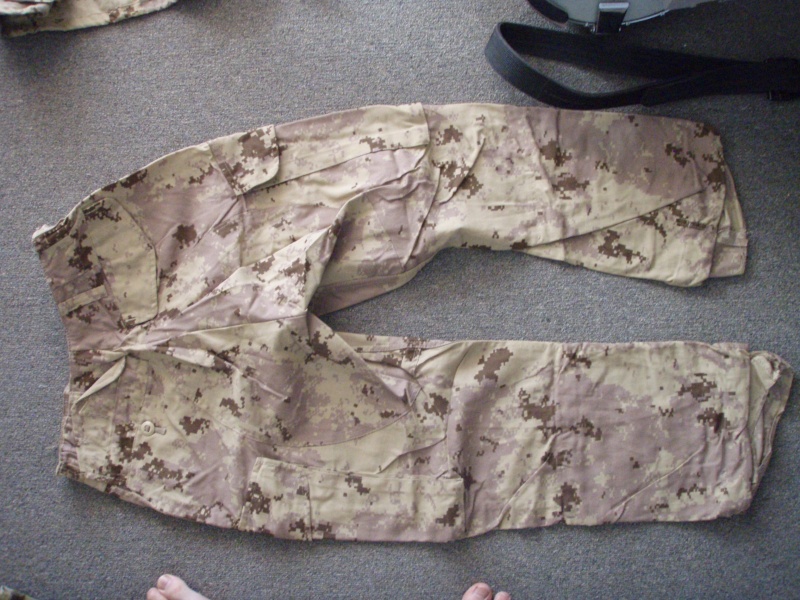 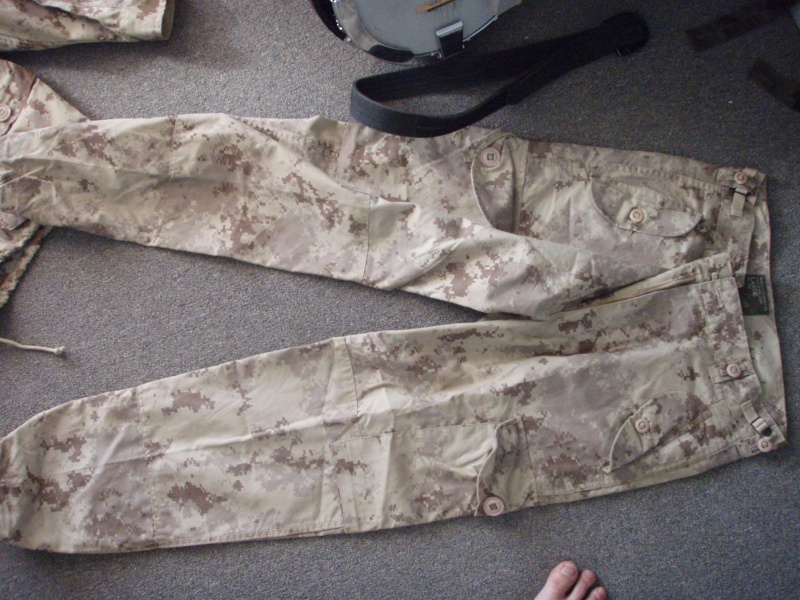 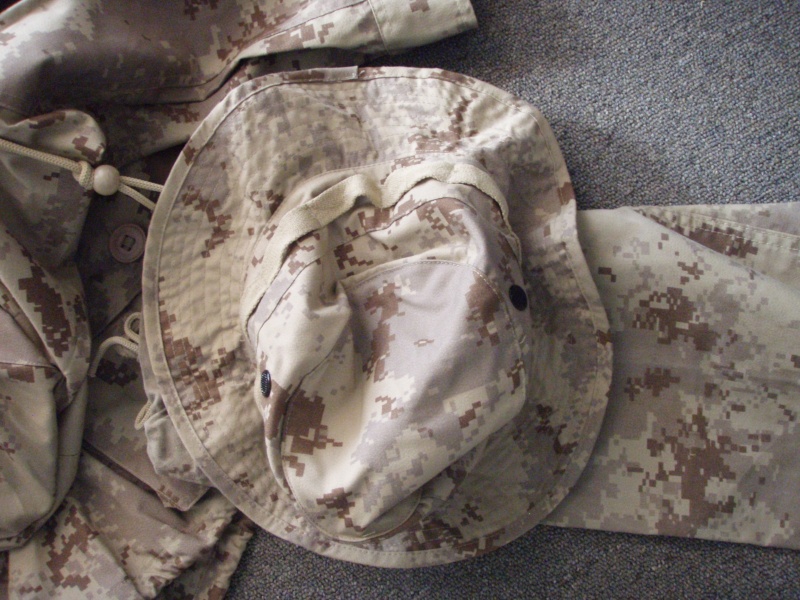 Good work getting these - I am officially jealous!
Easy Gee

Very cool, I have a set of Woodland Cadpat, but not Desert, I'm jealous too

hum so the newer version has exposed buttons i see.
very nice boonies

Did you get these from your time in Afghanistan ??? And could you show a close up of the tag in the First pattern Arid pants ???
lammasulyon

1st Model CADPAT Temperate had exposed buttons, 2nd Model has covered buttons. As far as I know there's been no evidence that there was a 1st Model CADPAT Arid. I know there is a Pakistani made set in the 1st Model cut, and that appears to be what's pictured above (green tag in the neck). Jimmyduncan23, can you tell us more about your ARID set in the 1st Model cut? I've got two of these uniforms, bought off a rack at a shop in Quebec, so it's difficult for me to believe they are legit (the shop owner was picked up by Military Police a few years ago for selling genuine CADPAT items, so he's extra cautious!).

i have the same set, with same tags, but the pakistani version, i placed under my "commercial" folder in my web album...

hay had a look over the first set has the green tag but no more, i did pick it up in a disposals in quebec canada 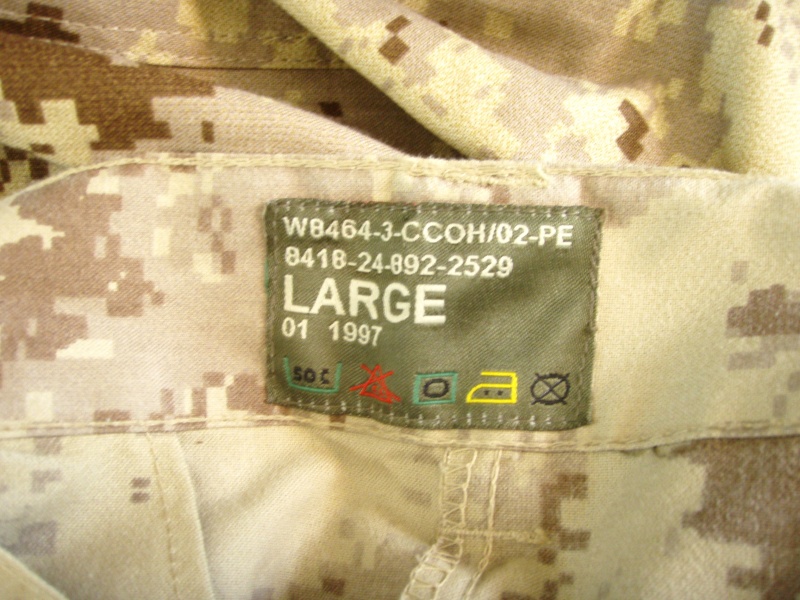 and these are the 2nd type no buttons exposed

Thanks !! the only grren tags I have heard of were the repos , I guess it could have been a private purchase item , but looks like a Paki repo made for the collector market , mine came from a vet and all have the tan or white tags , I wish I could show them , but the gentleman they were issued too wrote his name on the tags and I dont want to get anyone in trouble and they are controlled .

Seems to be a huge difference in these tags ......
panzerwerk

Just for fun I pulled out my first model temperate set and took a look at its tags as well , all these came from the same Vet , all my tags have no markings for fiber type or content , this seems to me the to be one of the big differences in these uniforms from what I have read the Canadian Military has strict control over these and guards what these are made of and it makes sense they would not list on the tag as these are supposedly made of special materials for anti night vision capabilities , what I am wondering is , if any of you have a set you know is issue that states the fiber type and content on the tag , there are so many repo's out there now ,it is really hard to tell whats real and whats not , sadly again he wrote his name on the tags and worse then the Arid set , I would have to block the whole tag out .

Please look guys , I am very curious to get to the bottom of this now .
panzerwerk

I posted a thread a while ago to cover this topic:

I'm still very, very puzzled about the exactness and high quality of the reproduction. It is atypical of a commercial knockoff. The green tags are also correct for 1997 timeframe. They're also expensive to reproduce.

My question is still out there... why would anybody invest so much money in making such an exact copy of something that possibly didn't exist? It's totally possible someone did this to fake the collector's market, but usually that's reserved for stuff with long established track record of high pay off.

Bottom line... I assume these sets are commercial, but until I have definitive proof of that I'm going to reserve the possibility that these are unused test samples.

you know Steve , I think they are repos , we have seen the same tag in type 1 Arid with Pakistani tags , its very easy to remove the Pakistani tag and it looks legit , Pakistan as far as I have read never made proto's for Canada , it was all done in Europe via Barracuda ,that said , never say never , but the only green tags I have seen are so far in repos , and it has been very cost effective for them to make these sets , they were originally selling for over $600 on ebay , I also think the tags with the fiber content are ones made for the commercial market as the only Canadian piece I have with fiber type/content in the tag are my 100% polyester fleece sets . I wish there was more info as I could be totally wrong .
jimmyduncan23

Hi Guys, just thought I'd put it out there that possesion of Canadian DND issued CADPAT AR TW or other patterns (Arctic)Is ILLEGAL, Its a federal offence and can carry a hefty fine, confiscation of goods and jail time. The label shown in the pictures here are DND Issue (the ones with the big serial numbers) Its ILLEGAL TO BUY SELL TRADE OR BE IN POSSESSION OF. Up here we recently had 2 CF members arrested for leaking CADPAT. If I where you Id lock it up and tell noone you have it because if the CF finds out it is not a pretty scene. Not trying to insult anyone just giveing everyone a heads up..........
panzerwerk

Criminal Code
PART X FRAUDULENT TRANSACTIONS RELATING TO CONTRACTS AND TRADE
Public Stores
Unlawful use of military uniforms or certificates
419. Every one who without lawful authority, the proof of which lies on him,

(a) wears a uniform of the Canadian Forces or any other naval, army or air force or a uniform that is so similar to the uniform of any of those forces that it is likely to be mistaken therefor,

(c) has in his possession a certificate of discharge, certificate of release, statement of service or identity card from the Canadian Forces or any other naval, army or air force that has not been issued to and does not belong to him, or

(d) has in his possession a commission or warrant or a certificate of discharge, certificate of release, statement of service or identity card, issued to an officer or a person in or who has been in the Canadian Forces or any other naval, army or air force, that contains any alteration that is not verified by the initials of the officer who issued it, or by the initials of an officer thereto lawfully authorized,

is guilty of an offence punishable on summary conviction.

I responded in the other thread

It's not illegal to own CADPAT.

Furthermore, a lot of uniforms that our members here hold in their collections should technically not be in private hands.

Furthermore, a lot of uniforms that our members here hold in their collections should technically not be in private hands.

I don't think this topic requires any further exploration.

By getting into this we are beating a dead horse. If I asked 100 CF members, civvies ect the legality of CADPAT, from buying/selling, possesing or wearing it, I guarentee I would get 100 different responses, with 100 different opinions, and 100 pages of "Official" things to back their opinions up. I really dont want to open up the CADPPAT debate again. Simple, when it came out it was illigal, it still technicly is. But due to the incompetance of many QMs and CF members selling their uniforms/gear ect to surlpus stores and collectors, the laws reguarding CADPAT are often ignored and buried under so called "loopholes". Technicly nobody besides CF members can "Legally" posess CADPAT, for two reasons, there are only two ways to obtain it:

1. A surplus store; This method is illegal because Crown Assets and the DND clearly state that it is Illegal to surplus CADPAT. It is supposed to be burned. Furthermore it also states in their surplus buyers terms and conditions(Which everyone who buys from them must abid by)that any CADPAT items acidentally surplused are to be "Promptly returned". So method one Surplus store is technicly Illegal. But really do you think a store ownner in his right mind is going to return a shipment of CADPAT? No they are going to sell it, and because so many stores do this, its to big of a problem for the MPs to handle, and they've basicly given up. (Although when CADPAT first came out there were a few ppl charged and a few stores raided)

Now method 2. Buying CADPAT Items from CF Members: THIS IS TOTALLY ILLEGAL, CF Members are REQUIRED BY LAW TO TURN IN ALL "SENSITIVE MATERIAL" CADPAT is considered "Sensitive Material". The uniforms are DND property and CF members have no right to sell them to anyone, this includes field gear ect. This however does not stop many of them.

So All in all, Obtaining CADPAT is illegal. Posessing it is not. But because so much of it has leaked, the laws are not enforced or in most cases even reguarded. Im not going to argue, this is the truth plain and simple. Im not trying to come across as rude or anything. I have done extensive research on this subject and after talking to liturially hundreds of people and reading threads from forums listening to countess debates and corresponding with DND many many many times, this is the conclusion I have drawn on the CADPAT issue.
koalorka

It's not a matter of talking to hundreds of people, it's a matter of simply referring to the Criminal Code of justice. Nowhere is it a criminal offense to poses CADPAT. Selling commercially or distributing from within Canadian Forces inventories is another matter all together regulated under the National Defence Act.

And there is a third way of obtaining CADPAT: from anonymous internet sources.

There is another way to get cadpat and "restricted" items from other countries and this is if they leave the supply chain before they come into the possession of the armed forces of any specific country. The manufacturers of such items sell trial or imperfect items into the trade and this is how many hard to get items end up in our community. Most of the laws I have seen which restrict uniform items refer to these in one of 2 categories, viz.,
1, Items owned by the "army".
2. Wearing such items in "imitation" of a person entitled to wear such items.
Hence, if the item is, or was never owned by the "army" or you are not trying to imitate such a person, I do not know how an offense is being committed. However, the burden of proof will usually be on you to prove your innocence!
jimmyduncan23

And the best of all it not illegal to own in another country there country rules finish at the border!other wise this hole forum would be in alot of trouble!
Sponsored content