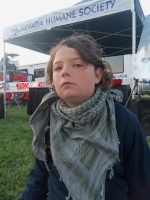 for a little while now now, I've been under the impression that the SDS FLC was the first MOLLE rig. Is this correct? Thank you.
CamoDeafie

technically its not; if you think of the SPEAR/ELCS system which is the same system of pouch attachment as the MOLLE system...but officially, the USMC MOLLE kit wouldve been the first ones; if its got the ball/socket plastic piece in the back and belt is attached by a few plastic buckles rather than being built in like the later FLCs. I don;t have photos on hand though; pretty sure that between that first gen MOLLE kit (MOLLE I) and the current MOLLE II kit, there were 2, maybe 3 variants; the first being detachable belt, no zipper on front, then the next one having integrated belt (still detachable, but main belt is inside the vest as opposed to hanging off the bottom), no zipper, then later still, zippered, all in Woodland Camo, and then offered in Tri-color DCU colors, then the ACUs and Coyote Brown kits; Im not sure if there were other variants; the earliest MOLLE anything Ive seen were marked MOLLE I and dated 99-2001 ish..the MOLLE IIs that were issued on a widespread basis were dated 2002+ as far as I can tell.