Just arrived today,manky as hell,well used and needs a wash 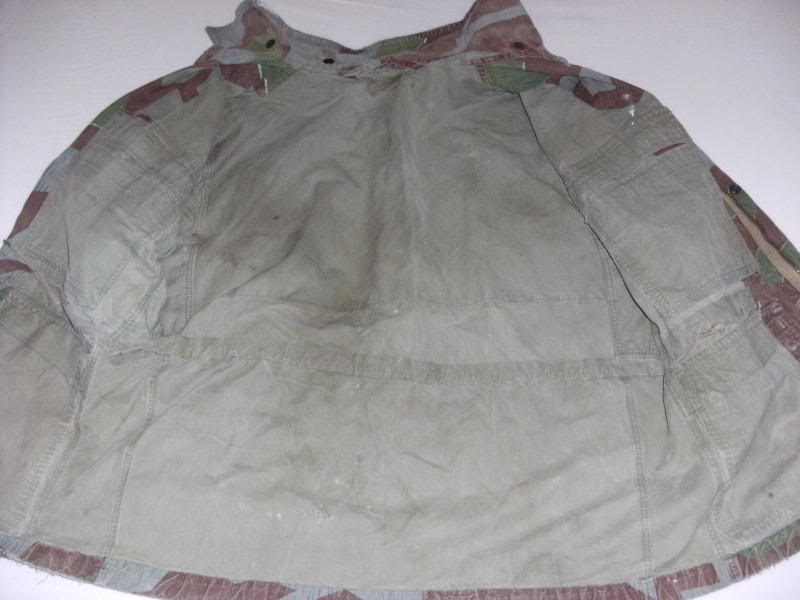 It looks worse than it is and hopefully after a wash will smarten up a bit.

Only real issues are 1 missing pop stud off one of the pockets and what looks like some form of short strap above each breast pocket have been cut off???
CollectinSteve

Everybody should have one of these

Pretty much last production run of Blue Splinter. Typical condition, unfortunately, as the BW issued these over and over and over again until the early 1960s. Since they only produced them for 2 years, but used them for about 8, that's a lot to ask of stitched together cotton!

Above each breast pocket was a D ring. This was initially part of the EVG uniform design from 1954 which only the Swiss fully implemented (the backpack connects to the D-rings). I suppose the Germans used it to hang a field flashlight from, though I don't recall seeing pics of anything hanging from the D-rings. I've seen many jackets with these missing. I assume soldiers cut them off so as to not get caught on things.


I guess by now that the pebbled finish pop studs are long gone and not available?
CollectinSteve

I haven't found any. The Belgian 1956/58 jackets had the same snaps and they also loved to rip out. Like the Germans the uniforms were reissued for a long time. I've received Belgian jackets right out of military warehouses with 2 or 3 different types of snaps on them. Fortunately the male end is a common size snap even today. I went down to a chain retail sewing supply shop and found snap heads that fit 100% perfectly. Not pebble grain, of course, but neither were the honest replacements. My advice is to try that and beat the crap out of it so it doesn't look out of place.

I think I've still got a set of the 50s splinter around here some where. A friende was in the US Army in the mid/late 50s in Germany. He worked as an interpeter since he was about fluent in German. He brought back a new, unused set of the splinter and a couple of sets of an SS pattern camo, 1 of which was a tankers coverall. He said the SS pattern stuff wasn't adopted for political reasons.
I got the Splinter set from him in about 1959? It has 2 jumps on it at a Confederate Air Force airshow in Texas in the late 60s. It has been washed a couple of times so no longer looks brand new.
Sarge
arminius

Congratulation, this camo is very rare to get

arminius wrote:Congratulation, this camo is very rare to get

I hope you get a fair price for these as a set. Make sure they are visible on German eBay!!

I dont get much luck on Ebay with my stuff