Anyone seen one of these in the flesh so to speak?
kammo-man

Real as in real German WW2 or real props off the film?

Reason i ask is on another forum full of supposed experts there is a 9 page debate regarding these and the outcome is still debateable but probably they were made for the film and NOT original WW2 made.

The link i posted are modern made and is what im interested in but dont fancy paying £180+postage!!!!
CollectinSteve

The guys that put so much effort into their reproductions didn't do a very good job. The cloth looks nothing like what was used in Where Eagles Dare. But you can get something that looks identical to it for under $100 on eBay since China is knocking them out by the boatload.

I don't know if the parkas used in the movie were original or not. I don't see that it really matters unless someone actually has one. Chances are they were reproductions.

The parkas used in the film were real WW2 vintage .

Not according to a lot of people

I beg to ask which people ?

I am not clear what you mean ?

Facts are facts and if someone doubts them well thats their own lack of knowledge into the subject manner.

The jackets were being sold by a very well known London dealer in Islington , I have handled them and I must say have owned 20ish pieces of WW2 German winter clothing over the years so I know real from fake .

Here is one of the jackets for study from page 213 of Camouflage Uniforms of the German Wehrmacht written by Palinckx and the late great Dr ,J F Borsarello who I consider the father of Camouflage collecting in the world. 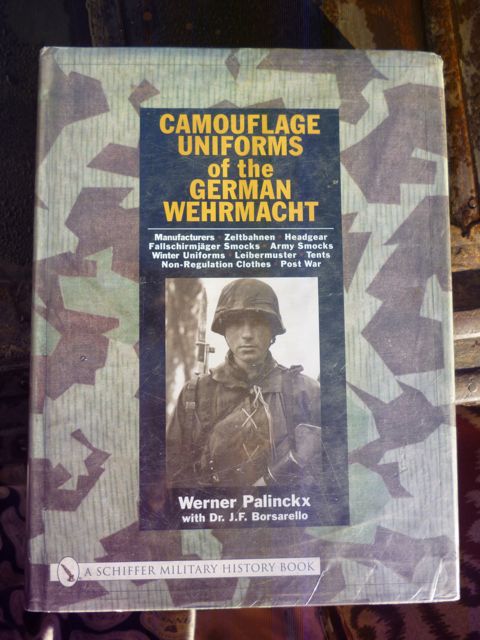 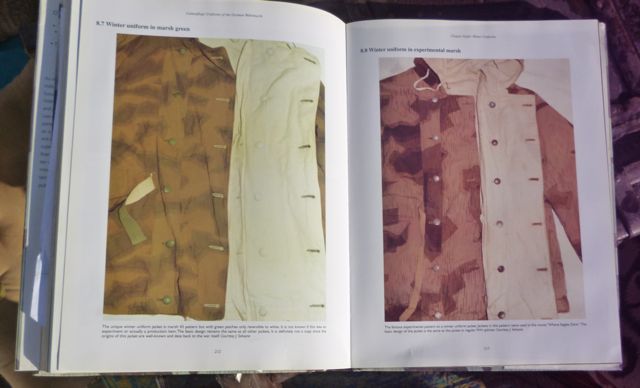 Here is the original WW2 jacket.
Experimental Marsh ......or in old money Tan and Water .
kammo-man 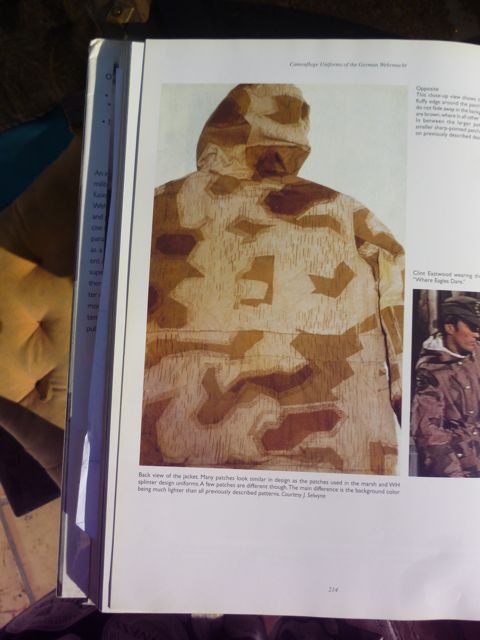 Here is the back side .
kammo-man 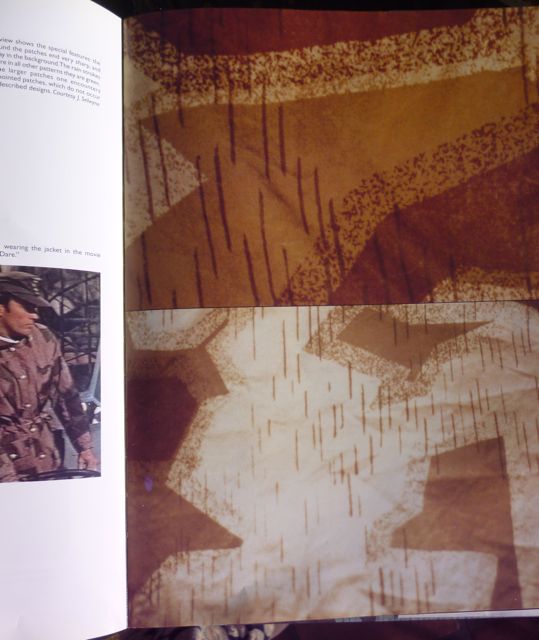 This shows a close up no top ...and life size bottom.
Gulf91

Im not doubting anyone as its not my field of collecting so am not commenting personally just what ive read on other forums-Wermacht awards being one.

Original/film prop i will leave that to the "experts",all i want is the closest possible repro i can buy as i am a huge fan of the film.

Many Thanks for the pics from the book-Excellent

Borsarello is a source which, sadly, leaves plenty of room for doubt. His books are riddled with opinion stated as fact, commercial items photographed and stated as originals, misidentifications of national origin, etc. Let me stress this again... he has a history of misidentifying commercially produced items as originals.

True, in total most of his stuff is otherwise accurate, but the quantity of mistakes he made over the years unfortunately makes sole reliance on his information less than ideal. One of his books is nicknamed "Brassy's Book of Blunders" (or something like that) because it there's so many errors in it.

It seems there is quite a bit of evidence that the brownish Splinter style jacket in Where Eagles Dare is post-war production. I can't say about the Sumpftarn version that is also in the movie. Maybe those were real and someone got the two confused?

In any case, Borsarello appears to be the primary source of information that the brownish type is WW2 and that Where Eagles Dare used original jackets. As I stated above, based on Borsarello's wide array of errors there is good reason to question what he has in print.

Personally, I don't really give a flying fig one way or the other

I dont want to cause offence or start any arguments regarding as to if the smocks used in the film were original or not-like you i couldnt give a toss,my initial question was regarding the custom made repro.

Regarding the Chinese repro parkas,does anyone know of a decent looking one as i have had 2 now and not happy with them.

Looking at the photos of the repro... it's quite a poor copy. The construction might be top notch for all I know, but the cloth is nothing like the original.

I don't buy repro stuff so I don't know what's good or not. There's a number of very good companies out there making these things to higher specifications, but you'll likely spend about 3-4 times as much as the Chinese ones.

Here is one that generally seems to be well thought of amongst the living history hobby:

CollectinSteve wrote:Looking at the photos of the repro... it's quite a poor copy. The construction might be top notch for all I know, but the cloth is nothing like the original.

I don't buy repro stuff so I don't know what's good or not. There's a number of very good companies out there making these things to higher specifications, but you'll likely spend about 3-4 times as much as the Chinese ones.

Here is one that generally seems to be well thought of amongst the living history hobby:

Cheers Steve,unlike some lucky buggers on here i doubt ill ever own an original German Parka due to their cost and rarity so just want a decent repro parka for occasional winter wear.

99.9% of the repros available have the sandy/yellow kind of base colour but did see one repro that had a much lighter base which while of course not perfect but at a distance close enough for me but for the life of me cannot find it again.

Not an essential but something i wouldnt mind getting sometime down the line.

All the best.
Gulf91

Also,while ATF do some amazing repros(the best according to some sources) here in the UK its a bummer as A. their shipping prices are over the top and B. we run the risk of getting clobbered by Customs fees,Import Duty,Vat and a charge by the delivery company which can sometimes add up to half if not more the cost of the item itself.

Have ordered a few bits from China and HK and never had any problem with fees etc but have been stung heavily more than once buying from the US so have pretty much given up.
kammo-man

Get the order shipped to a US mate and then have it sent to you.

S@M wholesale makes the winter sets for ATF and they do a good job.
I know both owners personally and they both are collector-owners .......Rolland from ATF is a character , but good for a laugh.
I love reading his rants very much.
S@M steve strives to make his fabric close using mint samples for the color , I have even seen some stuff aged up and passed as real , but if its easy to spot and thats a whole different can of worms.

Good luck in getting a jacket.

I have what was supposed to be an EX Band Of Brothers Parka again supposed to be by SM Wholesale but too big to wear and part of my BOB collection.
Bury_Dave

Is this the jobbie ??

It's on eBay right now. Auction ends in 8 hours.
kammo-man

I feel this is a repo one .

It's on eBay right now. Auction ends in 8 hours.

Crap,wish i had the listing number

I can't get on ebay from work but will post the listing when i get home if you like ? It disn't make its' reserve and its' BIN was ridiculously high. Maybe he'll re-list it ?

I know you are only after one as worn in the movie rather than one because it is the real deal but from the photos, I personally can't see how this was a proper camo' as there is no contrast. From a distance it would look like a white blob. and when you think Leibermuster was supposed to be going to replace all camos form all Arms, why would this one that is SO different and with no IR absorbing black, be thought to be a good pattern ?

I also don't think it is the same colouring as the one in the movie. The movie stills are quite washed out compared to the film itself.

I also can't understand why the producers would use those jackets if they were real or make them if they are fake. There have always been enough of the real McCoy about and a splinter one would be instantly recognisable and of stronger colours. Those old movie wardrobe units have always had plenty of amazingly rare as well as more mundane (for the 50's & 60's) stuff. How would 5 or 6 of this rare version all make their way into the same movie wardrobe ? It all smells very fishy to me !