It's even in use today but only for OPFOR. And the parka from 1958 is
now one of my favourites.So many nice,modern and interesting features and that piece was made in the 50ies!
ripcord

Most European 50s & 60s uniforms were made to ridiculously high standards.

I am certain that those of us who are blessed with some of the old dinosaurs do really appreciate them.

Jep thats right,the production standards led to exploding costs.And that's why the last version with the 2 front pockets, is a very very simplified piece.Today I was so excited because I wasn't
expecting that I will find the version from 1958!In my opinion it's the one and only rockin' version

So many great items in one thread!

Why did Austria move away from camouflage and back to solid coloured combat uniforms?
_________________
Interested in any European digital camo.

Philip was faster then me.

It's a typical Austrian thing.1.No money-low budget(production was to expensive for the camo Stuff).
2.It looked to agressive and to militaristic.(in the crisis over South Tyrolia after WWII Italian
newspapers wrote The SS is back(because of the similarity to SS camos).
3.In Austria everything is a political problem.(that's why the STG77 in Austria has no standard bayonet- to brutal)

But the official version was, that olive green works better than most camouflage patterns and in the Austrian combat tactics of cold war they had the opinion that the future battles won't be close combats so camo pattern would be useless.So Austria is one of the few countries beside Israel, North Korea,Venezuela without camouflage uniforms in regular service(except special forces).

They are testing digital camo versions(3) since a few years (digi KAZ03) but I bet it will never be issued in regular service except special forces like Jagdkommando. We are one of the richest countries in the EU but the Austrian armed forces are something like the stepchild of the nation. We even cannot afford more than 9 Blackhawks 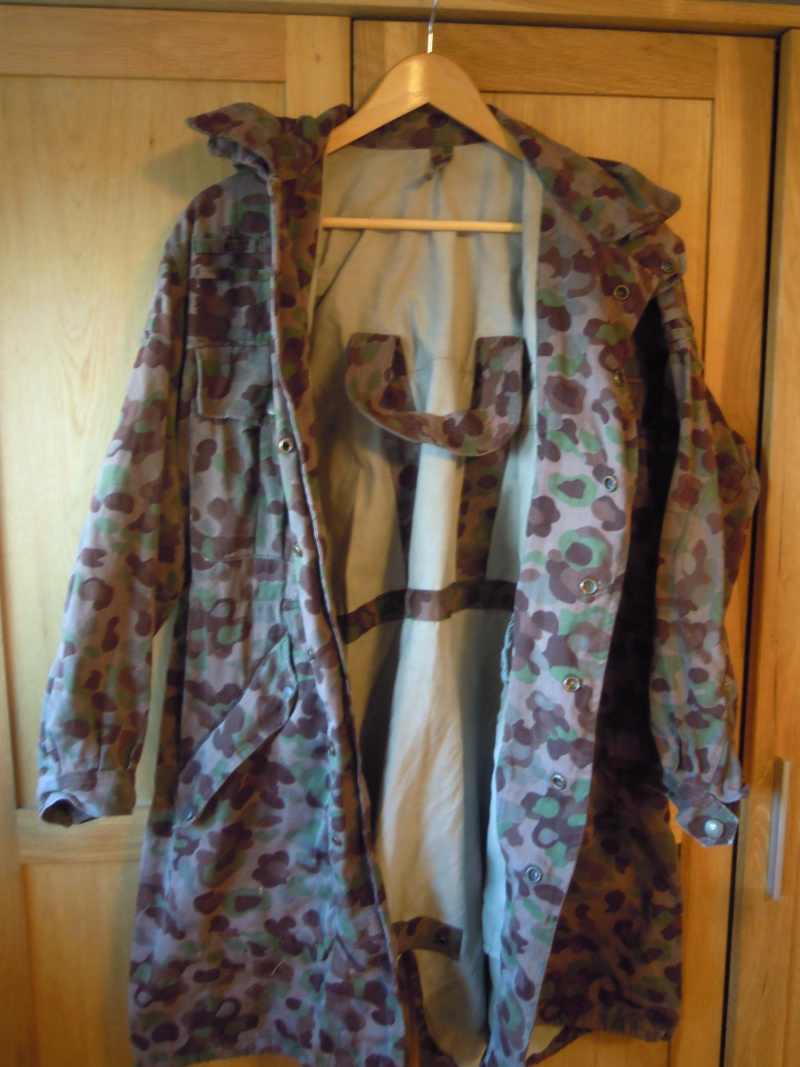 Don't know what thats for: 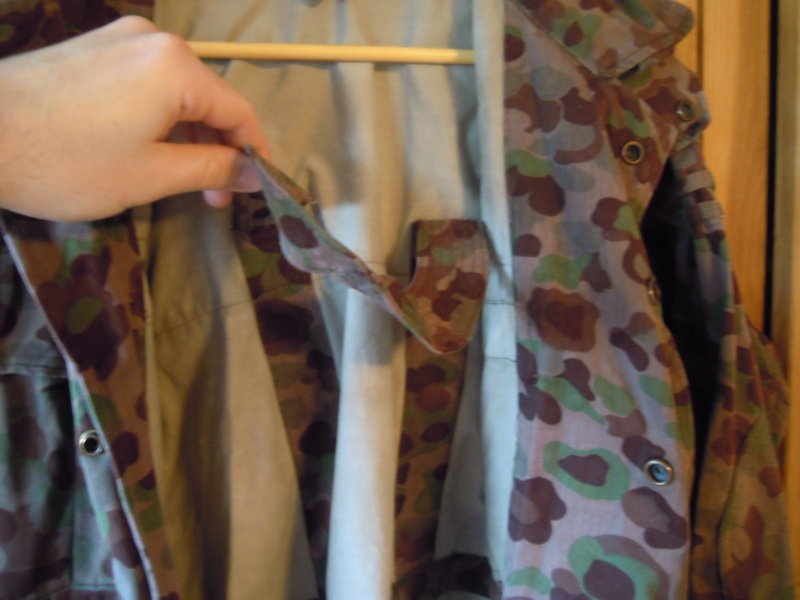 Very interesting. Could be a handle? Something for drag a wounded or it´s something to carry the coat folded.
Just my two cents.
JR

Might be possible. Maybe as an improved litter?The old pieces were very clever made and
functional.

I've also heard that with 2015 but if you look at our army budget you have to be very very
optimistic.They weren't able to issue the KAZ 03 for all branches until now, and we have 2014.
Maybe in 2030 everybody has the KAZ 03:).Time will tell.
CollectinSteve 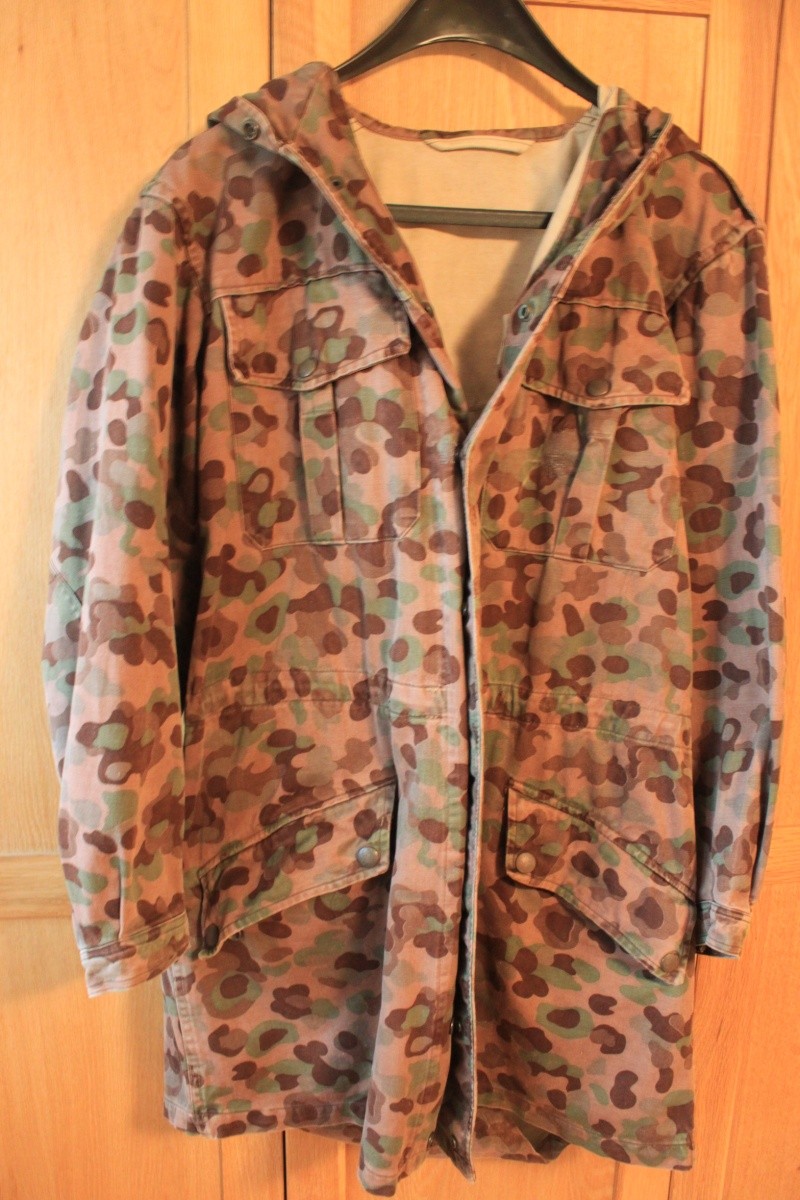 BTW, listed the matching trousers to this coat:

They are extremely rare and are, as far as I can tell, experimental.  Both the coat and the trousers share features of KAZ57 and KAZ59, which is not surprising because the production date is between the two.  For that reason I call it "experimental KAZ57/59" because I do not know of any official designation for this uniform. I have seen one item made in 1958, but the majority seem to have been made in 1959. I've had about a dozen pieces of this uniform in my hands.

The easiest way to spot this uniform:

1.  Trousers have snaps.  No trousers were made for KAZ57 as far as I know, and all trousers made after had buttons.

Oh, and a clarification on your earlier post.  There are actually three official uniform designations:

You are the true expert.:)the whole Austrian stuff is a bit confusing.What I'v heard from
old army guys  even in the Austrian army they always called every camo piece just K4 or Kmaz 57 or just M57.there are many photos where soldiers are wearing diffrent versions at one time.everything seems to be worn mixed up.
CollectinSteve

For example, many US military personnel think of the gray digital camouflage as "ACU", but in fact the ACU refers to the style of uniform and UCP refers to the digital pattern itself.

There is a very detailed book on Austrian uniforms.  It is not complete and 100% accurate, but it is the best out there:

He states that the trousers, like I have on eBay, are part of the KAZ57 uniform.  However that may not be correct.  The snaps on the KAZ57 coat are standard with the pebble exposed surface being the ring part.  The KAZ57/59 trousers and coat both have very strange reverse design with the pebble exposed surface being the post part.  I do not think that is a coincidence.  Also, the manufacture date of the trousers is 1959, the same as the coat.  I've never seen a KAZ57 coat with a 1959 date.

You should keep your eyes open for Drillichanzug M59 shirts, trousers, and caps. I never see these items on eBay. In fact, after 10 years of searching I finally acquired a 1959 dated shirt and 1973 dated trousers. Every soldier had probably 2 of these uniforms, so I am surprised they are so difficult to find.

The Austrian camo stuff is a true ,,science,,! I think I've always heard/read the classification(even in some Bundesheer-handbooks) as KAZ57/59 for
every piece of camo.Didn't even knew that a designation like KAZ 69 existed.Always learning something new.

For example I've posted the KAZ 59 trousers with the integrated belt from 1963.
I also found some without the integrated belt and bigger belt loops from 1961(some pics before).So was this version also for testing or trial or just custom?
Very confusing....

The DrillichanzugM59 stuff is also very hard to find. I think I only saw one shirt some time ago, never trousers.

My second pair of KAZ 59 trousers from 1963 are with integrated belt and very thin loops.
This is my pair of tanker trousers.They are like you said. 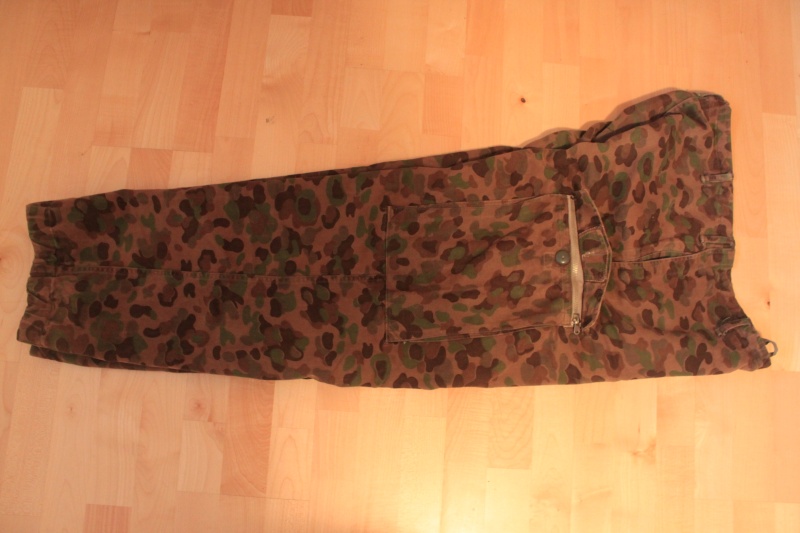 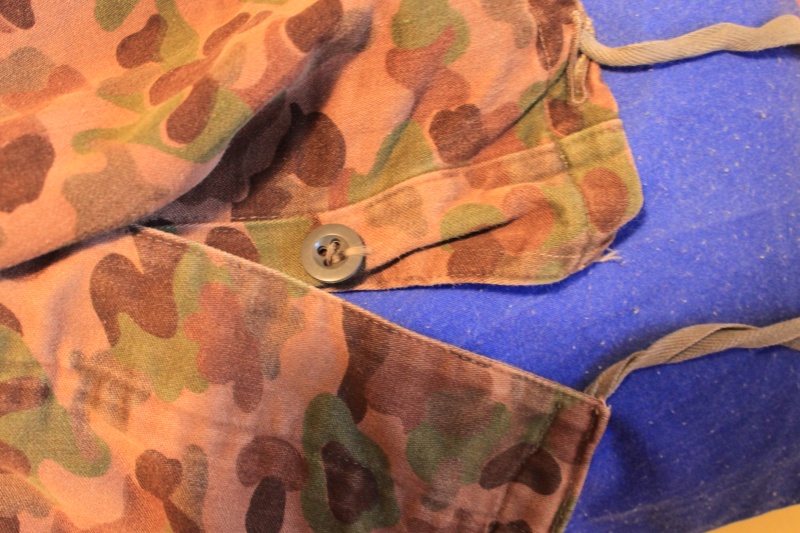 This is the pair of KAZ59 trousers from 1961 without integrated belt and bigger loops.
If they were custom made, that happened very professional. 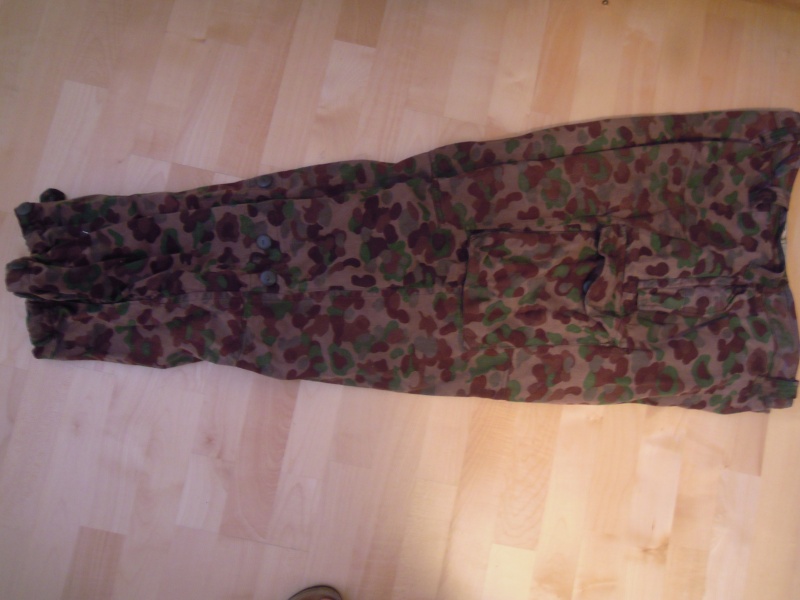 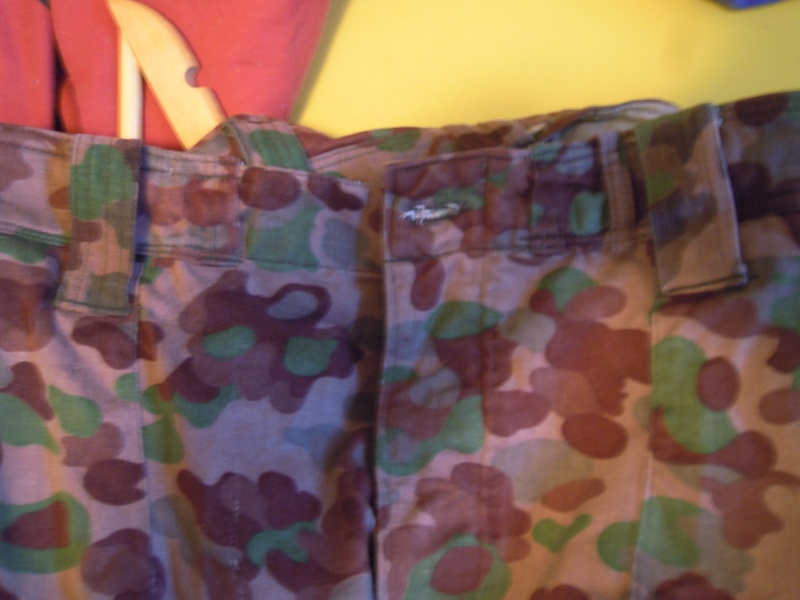 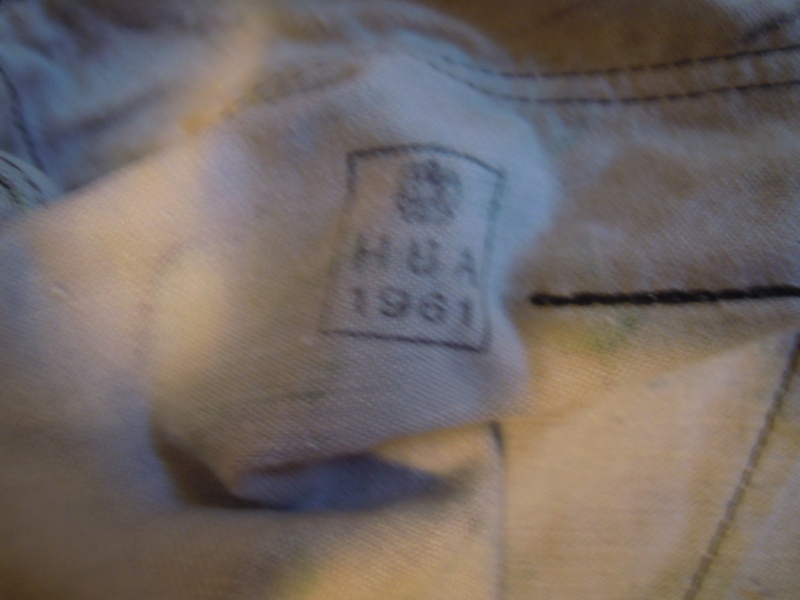 Yup, first one is standard KAZ59 armored troops trousers. The second one is, as I suspected, standard KAZ59 with "homemade" belt loops. I have seen this modification before. If you look carefully you will see signs that they were added. Definitely a high quality job.

The Austrian Army remanufactured some of it's uniforms to keep the older ones up to current standards. I suspect this is the case with these trousers. Other modifications I'm aware of:

1. Adding epaulettes to KAZ59 parka (originals do not have them)

Your'e right.I knew that with the  modifactions, even saw some KAZ 59 parkas before the rank sleeves were added. One nice modification is also the custom
enlarged cuffs like on my second KAZ 59 parka.Don't get it why they made the sleeves so short.

I wasn't sure with the trousers from 1961 because they job was made so good, even the colour of the loops matches to the trousers standard colour.(not typical for Bundesheer tailor shop work).

And I have also seen one KAZ 59 parka with a full length zipper(the same zippers like on the tanker jackets).Looked very nice.
But my favourite piece is still the parka from 1957, the features and the style of parka fascinates me.
If you remember they are from the 50ies and had so many modern attributes. It's sad that it ended up with the low cost and very simple KAZ69 parka.
CollectinSteve

I agree the KAZ57 parka is the best

I've seen both snap and button epaulettes added to KAZ57 parkas. I think I have seen other modifications here and there, and of course many repairs!

My guess about your 1961 trousers is they were unissued before being modified. This means the new cloth used for belt loops would match (pretty well) the cloth of the trousers. Unlike another KAZ57/58 trousers I have that has brand new material for the knees and the trousers are very well worn. Looks very stupid

Oh, and I just posted my Drillichanzug items in another thread.

Now my KAZ 69 set is complete!Trousers from 1970 in awesome condition.
Just missing the damn snapped button trousers for the experimental parka from 1959. 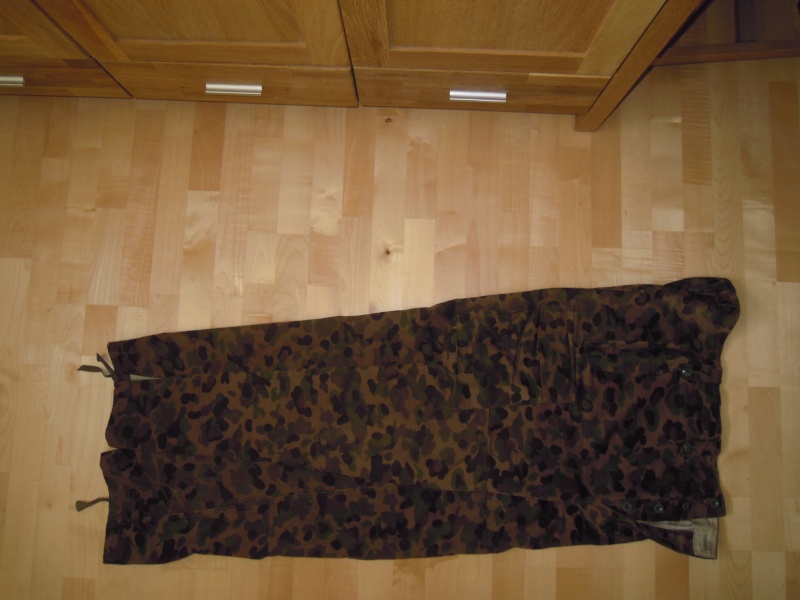 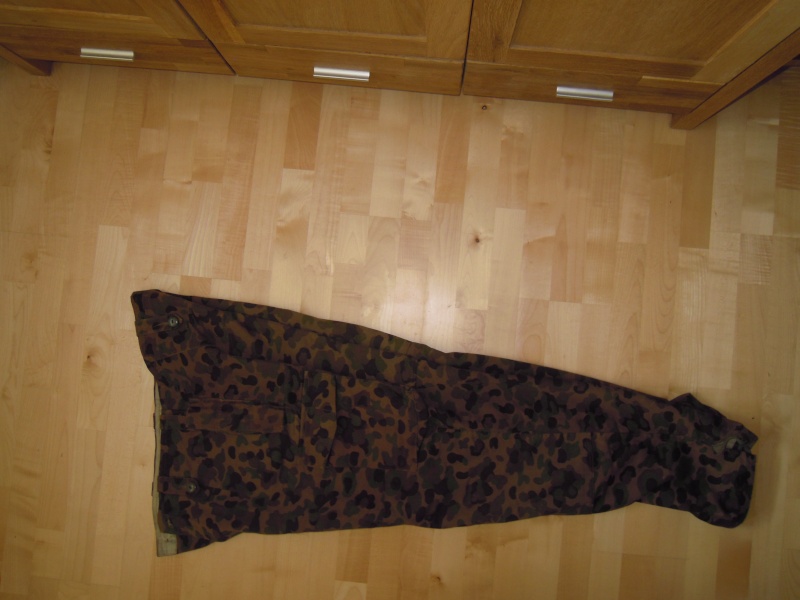 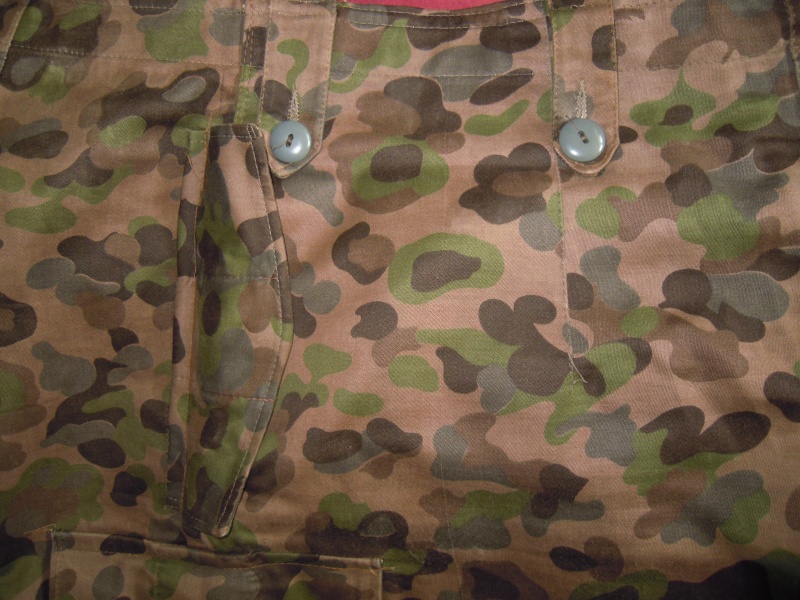 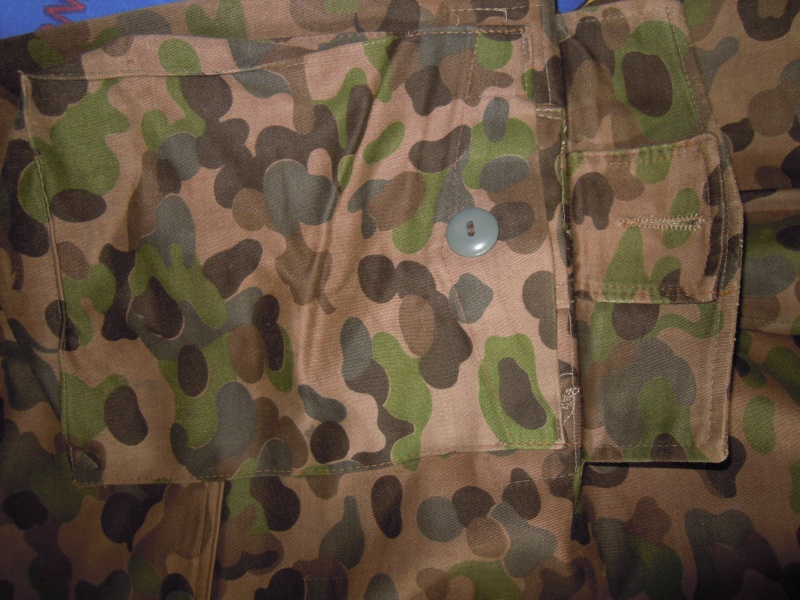 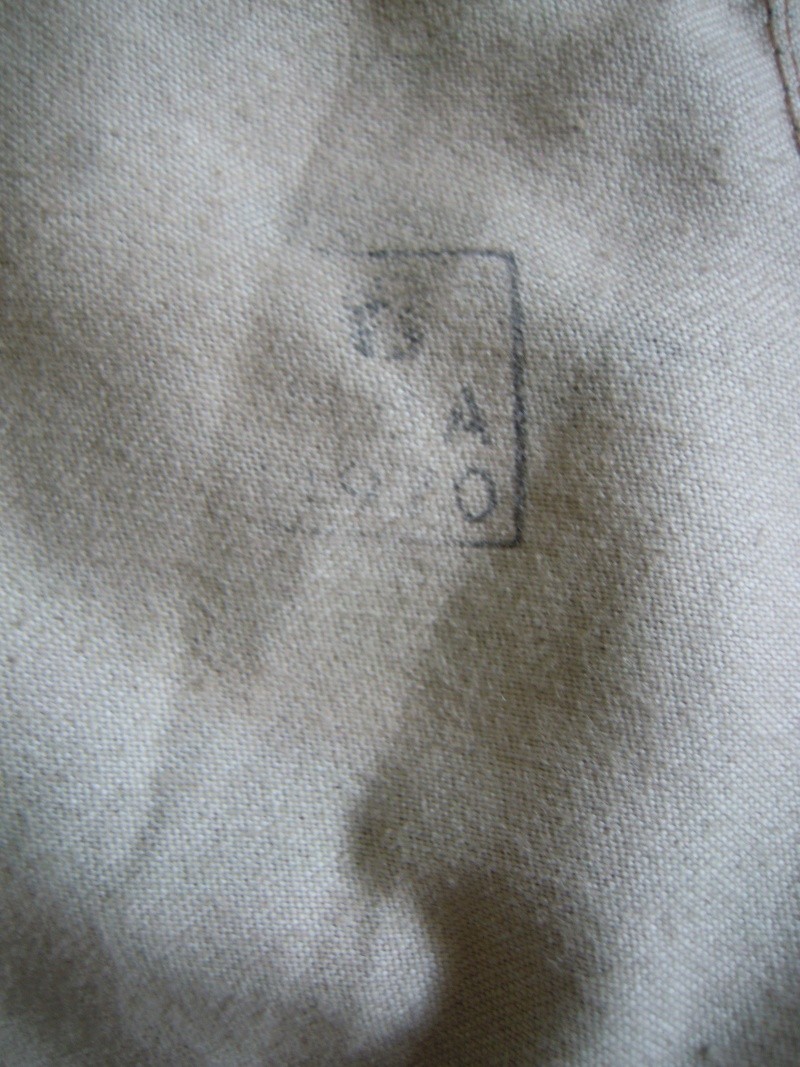 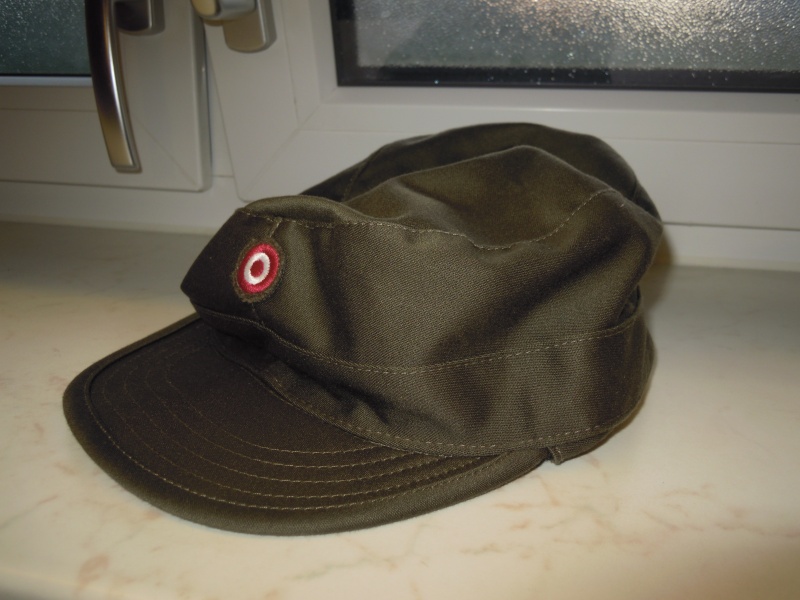 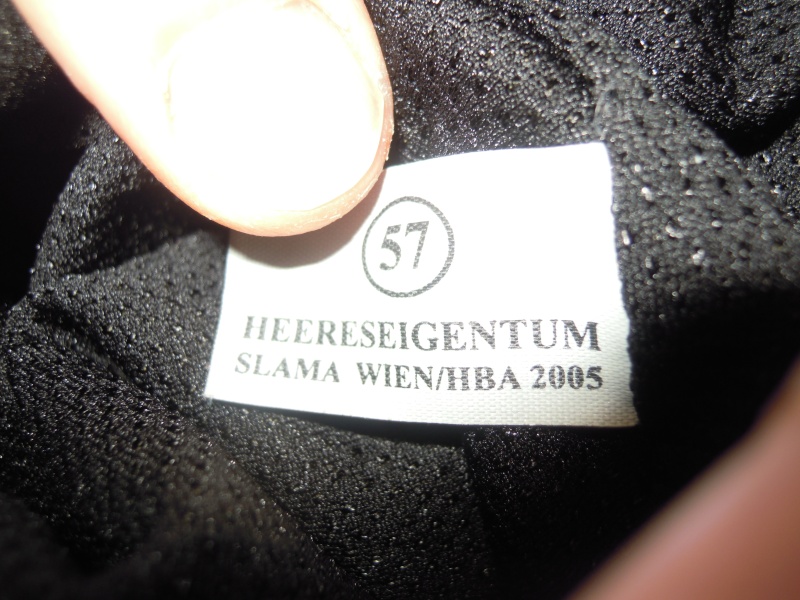 Here is a pic where you can see, how different the
Austrian KAZ 03 colours can be. There are some washed
out examples for sure, but it shows how hard it can be to find
one matching same coloured set. 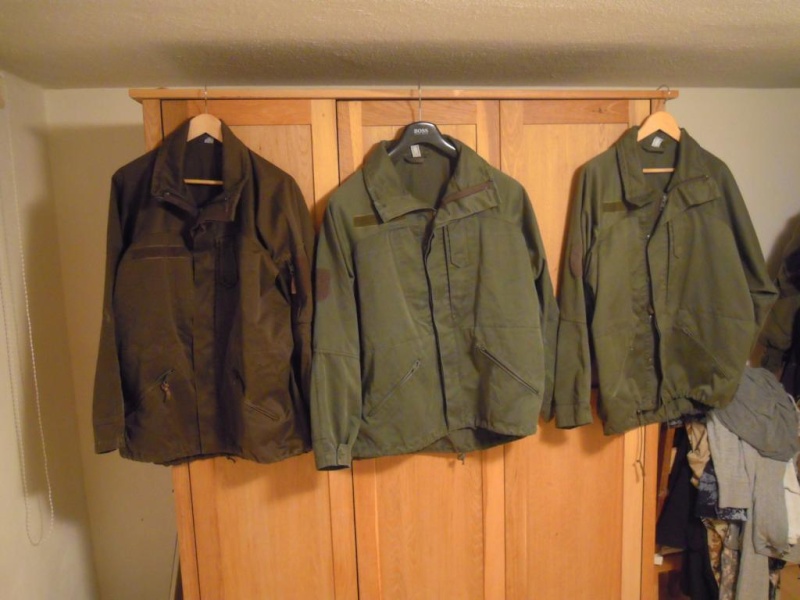 Wow. That is quite a difference. Reminds me of late WW2 3rd Reich Heer uniforms. No two pieces look the same. They had the excuse of bombings and massive military defeats, so what is Austria's excuse?

Cheap material, changing manufacturers, low quality control. The left one was
made by FEUCHTER(Germany) and the other two from FECSA(Spain).Both companies are producing in
different asian and european countries.
During my conscript service our superior officers always made this joke when we asked why no uniform matches to another one. They said:,,We have so many colour variatons,
because when a platoon is standing together, photographed from above, it looks like a giant camo-net.'' 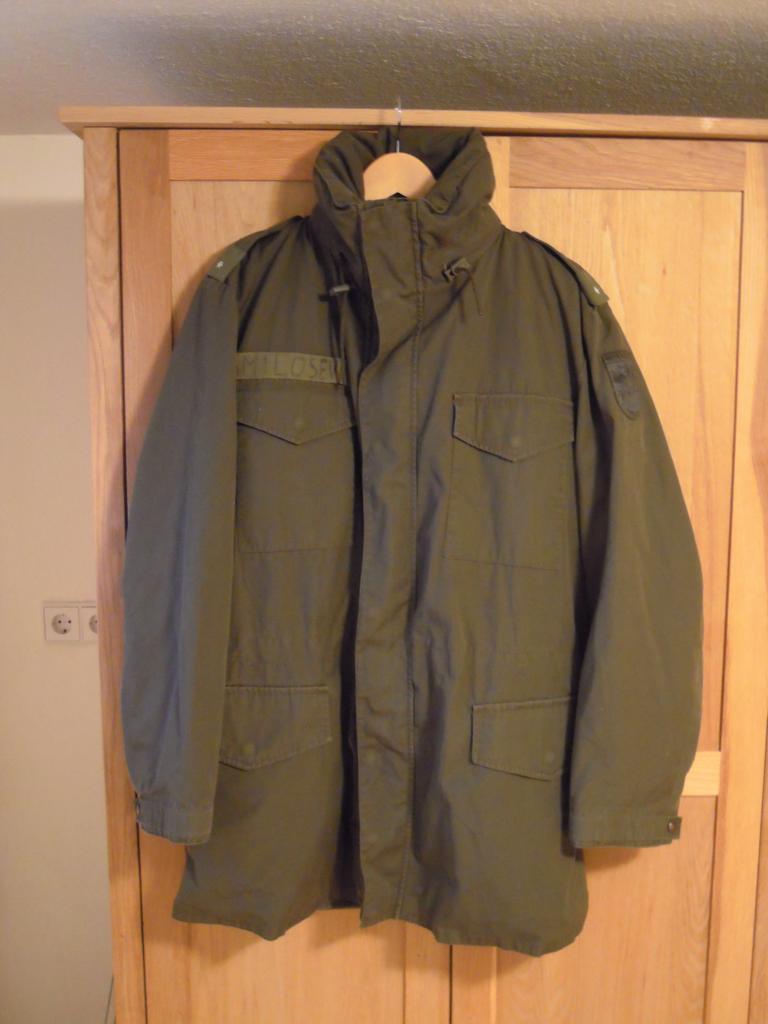 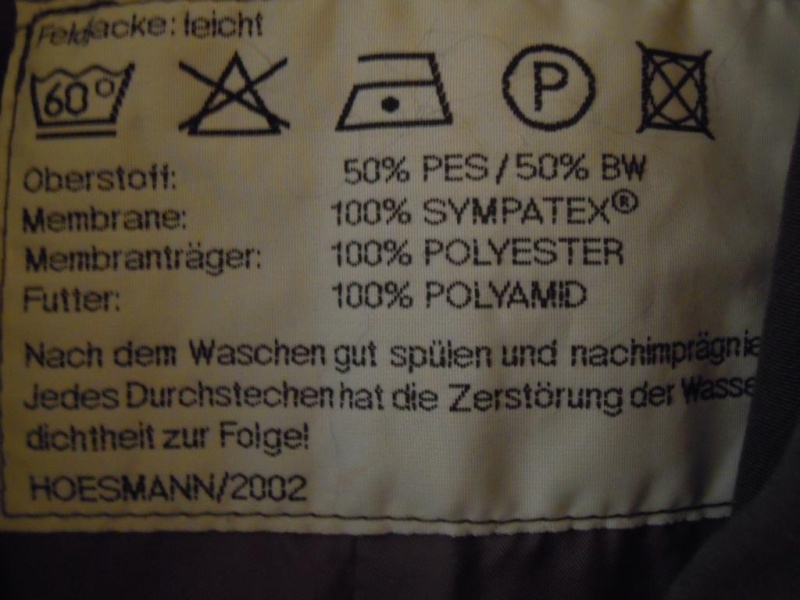 left one - sympatex right one goretex 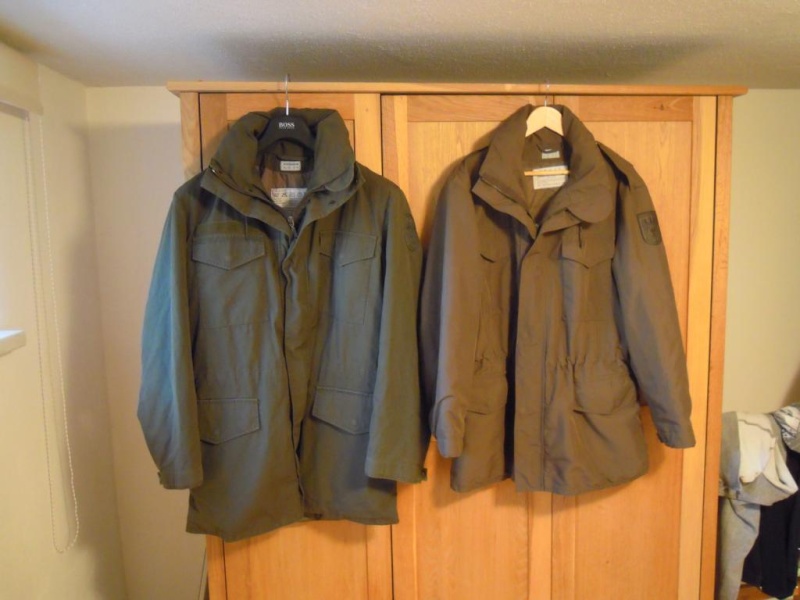