Over in this thread we got to talking about different Leibermuster camo copies. I have taken a fairly quick look at my Swiss and Bundeswehr 1954 sets and concluded the following preliminary things:

1. The Swiss used at least four different patterns for their uniforms (and I'm pretty sure even more if you include other garments).

Type A Made from thin canvas and is very similar to BW and WW2 WH pattern. Consists of 6 colors; tan background, red, green, very light green, white, and black. A dark red results from overlaps of red and green, but it's clearly not a separate screen. Typified by small clusters of fairly small white/green dots around the edges of the green and red colors. The "drips" appear to be thinner and less regular than all patterns which follow. Made in the late 1950s and early 1960s.

Type B Heavy twill cotton uniform in the same cut as Type A with only minor differences. Consists of same 6 colors; tan or brown background, red, green, very light green, white. White/green dots are more simple shaped and a little larger, but still mostly clustered around the edges of the green and red colors. Colors are laid out a little more "blobby" vs. the thin tiger stripe effect of all three earlier patterns. Probably used in the 1960s, definitely in the 1970s and at least 1980.

Type C Same as Type B cloth and uniform cut. Consists of 7 colors, 6 as before but with the addition of a light red. Unlike the overlapping red/green of Types A and B, the predominate red is lighter with a darker red blobbed over it in places. There is no major overlapping with the green color, except at the edges where you can clearly see there are three distinct colors being laid down. The white/green dots are not clustered, they are larger, and are out in the middle of the background color as opposed to be clustered around the edges of the greens and reds. Colors are also laid out more "blobby". Definitely used in the late 1970s and early late 1980s (alongside TAZ 82). Not sure about other dates.

Type D Light cotton/polly mix (TAZ82) which overlapped with the earlier, heavier sets until TAZ90 was introduced. Same colors as Types A and B with the reds and greens overlapping and no second red color. Much "busier" pattern with less of the background color showing through. The dots are even larger and less numerous than the other patterns.

2. I've noted at least two variants of Type C where the red and green screens were reversed. This is consistent on a few pieces, but I'd have to look more closely to see if it has any correspondence to dates.

3. The Leibermuster pattern was designed to have the black shapes appear almost randomly so as to reduce repetition. This was achieved by using a smaller diameter roller for the black so it practically never overlaps in the same way. This is not true for Type C. Every matching underlying colored spots I checked had the black in the same exact places. Types A, B, and D are like BW and WH Leibermuster in terms of using the different sized black rollers.

4. Another thing the independence of the black roller allows for is flipping the screen left/right and/or top/bottom. This allows for even more variations in the overall pattern, which increases the camouflage effect overall. I haven't spent enough time to see if they did this with uniform Types A, B, or D, but I know for sure they did it on their shelter/ponchos. Which makes sense since those are supposed to be buttoned together, therefore the more variety the better.

5. There are a lot of color variations amongst the uniforms. The background color seems to be the big one they changed. I don't know if any of these changes correspond with dates, however it is my observation that the lighter based uniforms are earlier and the darker ones are later. Certainly the examples of Type A I've seen are very consistent and have a light tan background and all of the TAZ82 stuff I've seen is quite dark. It also appears that the dark red color fluctuated more than the others. One example the overlap red/green color is almost brown instead of a dark red.

Far more research has to be done than I have time for at the moment. Fortunately, I have about 40-50 pieces of Swiss gear in Leibermuster that I can check over when I do have the time

As a footnote, my brain has always told me that the various Swiss pieces I've handled didn't look the same. I chalked it up to color variations and the fact that with so many pockets, seams, etc. there isn't a lot of opportunity to see large sections to see subtle differences. But after looking at them tonight I've concluded that my subconscious brain is more observant in this case!

Great Work Steve , Will have to add some pics to this thread so we have a visual ID as well !!!

Also in one of my books , there is a green based version from the seventies , I have only seen it in pictures .
Dingo 1

Yes, Excellent disection of the variations! I think I might have a helmet cover in green based version, if memory serves? I can look for it if someone likes?
panzerwerk

I just pawed through about 50 pieces of Swiss stuff. Damned complicated!! There are 5 definite variations of the camo printing, 4 types of uniforms (3 heavy, 1 light). Seems there is some relation to dates, but they ran more than one pattern at a time.

The aqua green variation was used for shelter/ponchos and helmet covers only. Apparently this was the very first pattern made in 1957 prior to the uniform being made.

I'm going to try and sort out what was made for uniforms first, then I'll try to detail AFV coveralls, helmet covers, shelter/ponchos, and rain gear. Let's not get them all mishmoshed together because they are definitely not the same.

Found the helmet covers but I'm have technical difficulties, the site will not let me host a pic?
panzerwerk

Steve , When get everything together , we can redo the thread in the Swiss section with info a pics so we don't have a scattered thread .
CollectinSteve

I've spent a bunch of hours looking over everything very, very carefully. I took some pics too, but I don't have the time to put everything together. Man... there's something like 6 different patterns. Leibermuster is VERY difficult to examine since, by nature, it's supposed to be varied. Therefore, one has to look VERY carefully to make sure it's not a purposeful variation rather than a deliberate difference. Very confusing stuff, especially since they had 2-3 patterns running concurrently over a 30 year span!

Here are three covers that are just a bit different from the bunch. I'm glad I don't have as much stuff to go thru as you guys!!! 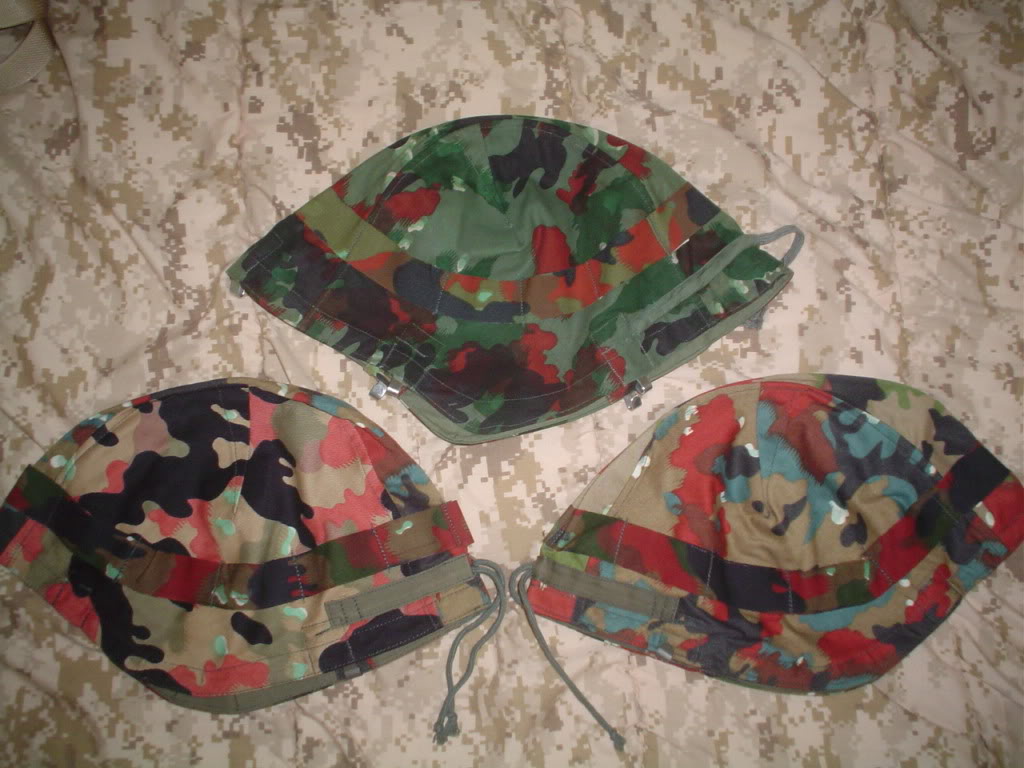 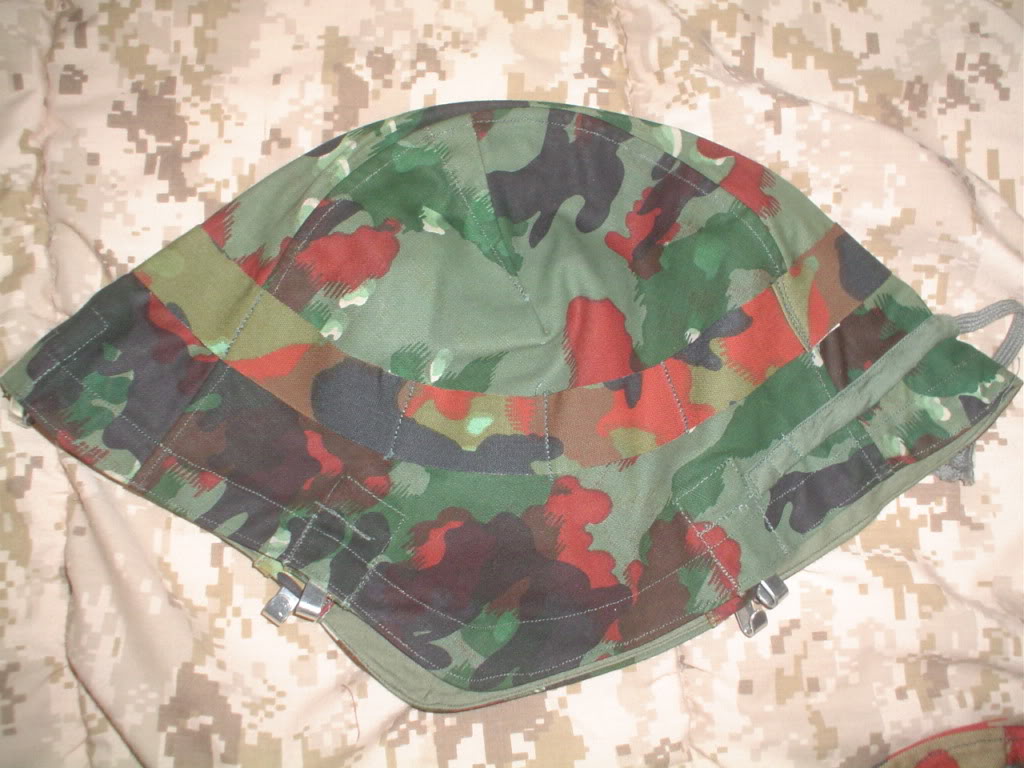 Neat! I've not seen the non-green type of cover before. I wonder if they are possibly assembled out of cloth that failed to meet military specs for uniforms? Sure are strange color variations!

Personally, I think the aqua-green Leibermuster pattern is one of the best looking patterns ever made. Just something about it has always grabbed me.

OK, I'm starting some threads regarding the patterns now.

They seemed to have been pieced together with normal patterned cloth. Yes, that would explain it, they surely would'nt use it for a uniform!
CollectinSteve

For some reason the Swiss were perfectly happy to wear helmet covers which did not match their camo uniforms. I've got pics of them on parade with Leibermuster and a mix of covers, including the earlier "Sumpftarn" type.

I have a couple of examples of the earlier "Sumpftarn" covers that are not reversable like the splinter/sumpf varients. They seemed to have painted the early covers. But that can wait for another time!
Dingo 1

BTW, great analysis on the Swiss Leib patterns! Keep it it coming! Thanks!
Dingo 1

Did the German Army experiment with the current Swiss patern? 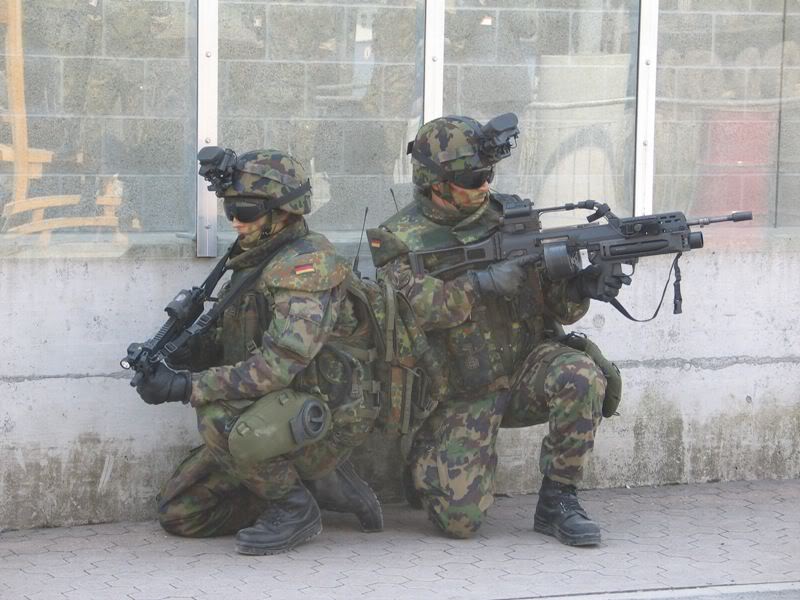 Off the top of my head I think the Swiss have something like 20 or more different helmet covers when you take into account things like reversibility, helmet type, how they fit on the helmet, etc. Quite a daunting task to collect all of those types!!

Hey now... that's an interesting picture! I'm not quite sure what to make of it. My guess is that's Swiss Special Forces. The Germans definitely haven't been playing around with different patterns and no way would they use the Swiss pattern even if they were. National pride and what not

The Swiss are also EXTREMELY unhappy about other people getting ahold of their uniforms, so that rules out a lot of other standard possibilities.

Steve I did not want to mess up the new thread , so I will post what little I have here , the Zeltbahn is the most interesting piece , and is dated 1956 , canvas with green backside , the other stuff is very modern .
I will take close ups of anything you want , just let me know .

The Hood is 1956 dated also , along with a tent pole bag ,same era and date

Thats all I have .
CollectinSteve

I already know you have the rare Bicycle zelt... did you really need to remind me of that?

Dated 1956? That's cool. A year earlier than I thought. Supposedly the uniform is TAZ57, so it would seem that the pattern was introduced earlier in a shelter/poncho. Probably made just over the border in Germany (somewhere around Bodensee) along with all of the other 6 sided shelter/ponchos of the day.

Thanks for the pics!

Man you have such killer stuff , I dont know why this little sleeved baby would make you jealous ?

Great pics! Now if I can only find a German and Swiss zelt/tarp that would be great! I seem to find the earlier Swiss splinter tarps more readily available?
CollectinSteve

There are two patterns of the Swiss Splinter with some minor variations. The first pattern is IDENTICAL to the Wehrmacht pattern, except it is in the Swiss square style. The second has small breaks in the brown shapes that allow the Green to "spill" through. The earlier pattern is very hard to find, made worse by the usual abysmal pictures of examples for sale on eBay. The later type is more plentiful and is available on eBay fairly frequently.

Here is a close up of the later pattern , you can see the green line that crosses the Brown splinter.

I have a couple the later type with the green "spill" through. I need to find the earlier example.