Is there 2 variations of wustentarn?

Is there 2 variations of wustentarn?

Are there 2 different variations or colours? Or is it just fading or production differences? Or is it the fabric variation?

Funny enough I was thinking of starting a thread on this because as of this week I doubt there is a "1st Model" and a "2nd Model" as I previously thought. This came about because a couple of days ago I finally received a 1993/94 trials uniform. Here's what I can tell you at this point:

The 93/94 trials uniform has most of the same features as the production uniform, but the background color is less "pink". It has buttons for the pockets and front flap instead of snaps, velcro on the arm pocket instead of a snap. Otherwise it looks to be pretty much the same as the production model.

The previously thought of "1st Model" has similar colors to the trials uniform, but is cut identically to the regular 5 color Flecktarn (Temperate) uniform. The cloth is not the same. It is made by a well known commercial company (TSR Rothenburg) which also produces uniforms for the BW, so their stuff should always be suspect. I now believe this "1st Model" uniform is from a limited commercial run and not genuine issue.

I think the only legitimate cloth type is 80% Cotton and 20% Polyester, though the trials piece is 65/35 (which is the same as the Temperate uniform). Any piece seen with a different cloth count is most likely commercial. Legitimate BW issue also always has a long series of numbers and letters starting with the letter "Q". There are quite a lot of commercial items out there that have been worn by German troops in Afghanistan, but they are private purchase and not issued by the BW itself.

Of the two shirts you have it would appear that the one made by Profistyl is commercial. I've never seen a legitimate piece made by them, but I suppose anything is possible, but there is no "Q" number and the balance of cotton and poly is wrong. The one made by Wahler is a bit of a puzzle to me. Wahler is one of the prime contractors for BW items and the colors are right, but there is no "Q" number and the poly count in the cloth is higher. So I suspect this is also "private purchase" and not genuine issue.

One caveat. I don't have any 2007 or more recent items of this type on hand to double check, therefore it is possible that the Q number has been dropped or the poly count raised. However, I doubt either have happened in the last few years, not to mention both. So my guess is that both the shirts you have are "private purchase".

Thanks Steve, these were all from a container load of surplus from Germany.

There is no Q on these either:
https://iacmc.forumotion.com/post-world-war-ii-to-present-day-f116/german-desert-camo-t2188.htm

I haven't any of my other German stuff with me right now to check...
CollectinSteve

From what I gather, from a chat I had with two BW members, is that a ton of commercial stuff went into Afghanistan. Reason? There were supply logistics problems and soldiers weren't able to get as many uniforms as they needed for deployment. This is a fairly common thing for large deployments, even for the US military. For all I know the BW itself purchased, directly or indirectly, these items for their soldiers out of desperation.

It is possible that the BW has recently dropped their Q numbering system after nearly 40 years of use. I've not had to purchase anything made in the last few years because it's no different than what I already have. But anything dated prior to 2005 should have a Q number on it and the cotton/poly mix should be consistent as well.

BTW, the Troppentarn (Tropical Camo) uniform is 100% identical to the Wustentarn (Desert) uniform in every way except for the colors. This includes the 80/20 cotton/poly cloth. Again at least up until 2005. I've not seen anything more recent so I can't comment on where things might be now, though I really doubt they have changed.

this is the Tag out of my "Parka" with hood

OK, I did some research. The Wahler item is legit. Here's what I've been able to piece together so far.

LH Bundeswehr Bekleidungsgesellschaft mbH (on the label as "LH Bw") is a private sector company (partially owned by the German Government) put in charge of procuring all BW materials. This happened around 2002, though I suspect existing contracts continued under the old system (I have 2002-2004 "Q" dated items). Wahler, in this case, was contracted by LH Bw to provide desert clothing. The "ASD-Nr." is apparently some sort of industry standard inventory system used within the EU.

What this tells me, I think, is that the old "Q" system was phased out starting in 2002. Legitimate pieces contracted for the BW since then have an ASD Number and the mark of "LH Bw" (and some sort of code before it). Which means the Wahler piece, above, is legit but the Profistyl piece likely is not. It has similar numbers, but so do most commercially produced items. It does not mention LH Bw, nor does it explicitly state a ASD Number. It also has a different color and cotton/poly mix.

The other thing that is interesting is apparently the current desert uniforms have reverted to the 65/35 mix instead of the 80/20 mix. I wonder if that's true for the Tropentarn uniform as well.

Interesting stuff!! Well, at least to me

Yup, looks like the Tropentarn is also now being produced in 65% Cotton 35% Polyester. I wonder when they switched?

I also found that the brand new cost of a Tropentarn uniform is about EUR 90. I'll stick with my used ones, thanks very much

You're very welcome. I was initially very surprised to find out that I have nothing newer than 2004 (except for an experimental set). No wonder I didn't know about the switch from Q to ASD

BTW, one reason there are such exact copies of BW stuff is that the specifications are in the public domain. That means anybody can download a PDF and produce stitch for stitch exact clothing in BW designs. Well, except for certain special forces stuff. For that you have to go through a vetting process. 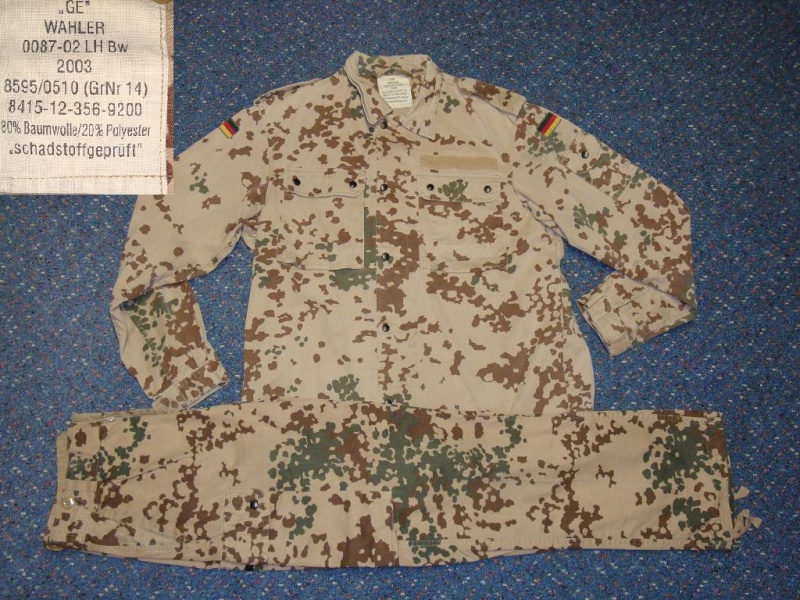 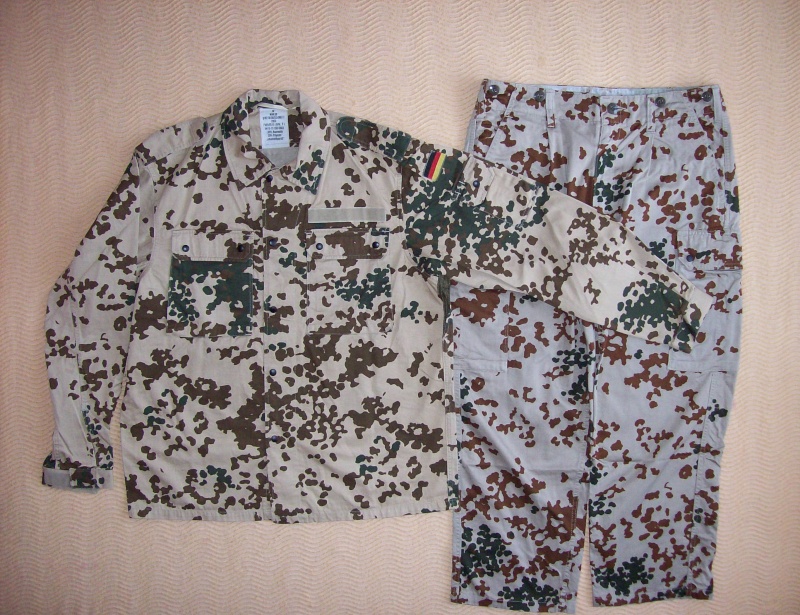 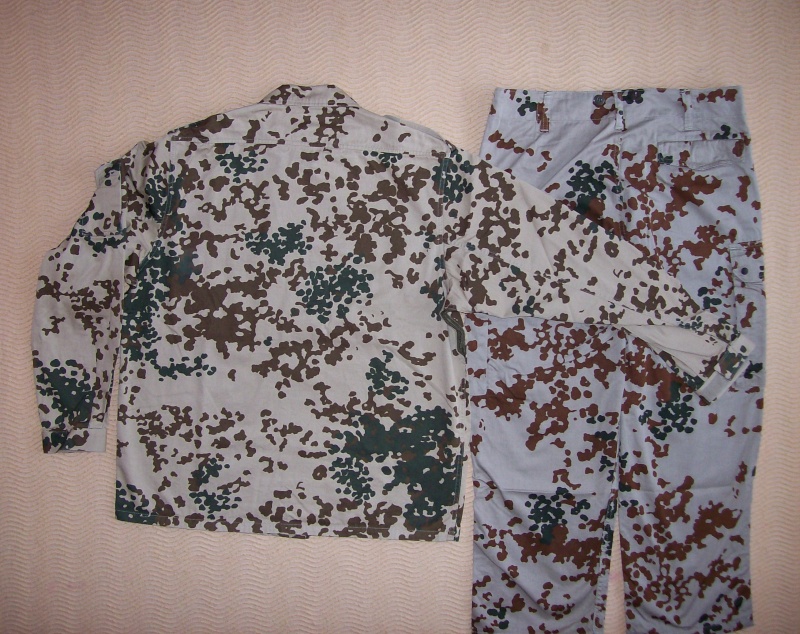 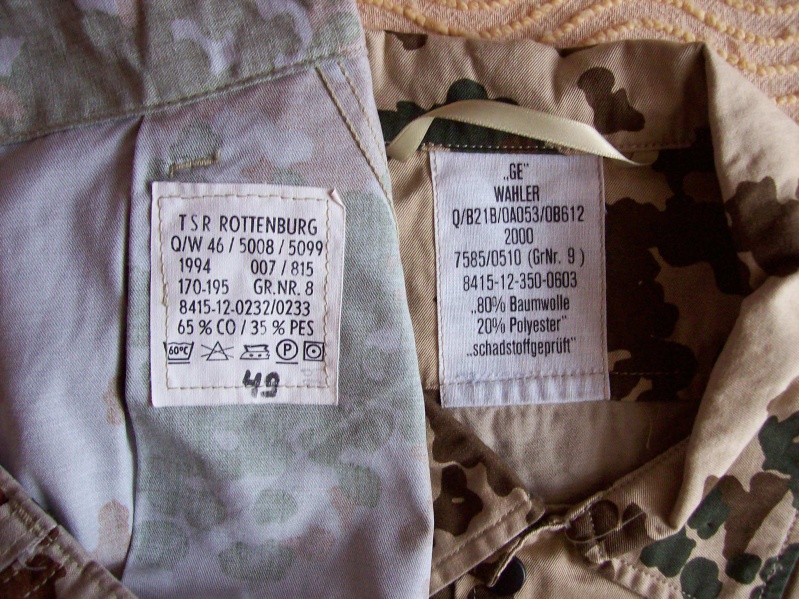 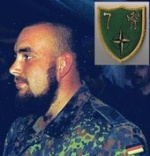 its a fabric variation! And i think from washing, i remember my uniform!

To clarify, it is my opinion that the 1994 TSR Rottenburg items are commercial, not genuine BW issue.

1. TSR Rottenburg is a well known producer of commercial items. If it has this tag on it, chances are it is not genuine issue.

2. The Q number does not look correct.

3. The cut is identical to 5 Color Flecktarn (Temperate), even though the trials and production desert uniforms (dated before and after 1994) are not in the Temperate cut.

4. The color of the cloth is different from both trials and known general issue.

5. I have found no evidence of other BW desert items produced this early, other than the trials, yet I've seen a fair number of TSR sets. If the BW was issuing desert uniforms in 1994 I am sure I would have seen other manufacturer's items and some different dates.

6. I have seen perhaps 6 of these uniforms, all brand new. The chances of finding only brand new uniforms from this period is very unlikely.

And what about this one : It seems to be the same cut as standard BW uniform but buttons are different.
Found it on ebay.
CollectinSteve

Yes, that is the TruVsu 93/94 type. 100% legitimate. It consisted of a silly ballcap type hat, shirt, trousers, and parka. There were other non-camo items in the trials, such as T-shirt, underwear, socks, and boots IIRC. I found it very odd that they used buttons instead of snaps since snap items had won the 1980s trials over buttoned items.

These items are difficult to find, but the do appear from time to time. In fact, I think the shirt you posted a picture of is mine now and is on its way to me from Germany. It's a small world

Sure ? Because I receive the vest last friday and take the picture this sunday.

You can see on the rigth a small part of a splitterschutzweste (1996).
I'm waitting this week other BW stuff. Then I will add my BW collection...
Sponsored content