Here is exc. website on Uzbekistan insignia, this is site by Maksim Savochkin a great collector!!

Thanks for the great link! I also appreciate all the people who have posted on this thread to help identify this uniform. We will eventually get to the bottom of this enigma.

I took the liberty of emailing the owner of the site that Chris posted a link to on this thread. I asked him about the uniform and this is what he said:

This type of camo uniform was received from Germany at an early age of
Independence of Uzbekistan. It was in use in Special Forces till 2006. In the
period of 2002-2006 it was a camo uniform for the Battalion of Special
operations of the Ministry of defence. Soldiers of this battalion have the same
branch insignia as Abn units (as you have on the picture) but they have
additional sleeve patch.
Yes, you are right, this jacket has the insignias of Senior Lieutenant. The cap
can be as officers as soldiers. This is official design for caps, but this cap
badge is for soldiers, officers usually have another one.
The sleeve tab - is also not a part of Uzbek uniform, and as you supposed it
could be a gift from any US soldier. But I've newer seen such tabs on uniform
HERE.
Unfortunately I can tell you nothing about personality of Yunusov Sh. S. A lot
of cadets and officers from our Abn units and Military schools took part in some
training program with US. But I can tell that it's not traditionally to use
personal breast tab for our officers.

Arch,
I've known Maksim for many years and have done lots of trading with him, he's an exc. source and very reliable, might I suggest inviting him to join here?

Chris!
Thirst of all thank you for you kind wards about me and for inviting me to this forum.
I'm happy to give some explanations concerning Uzbekistan uniform and insignias as well.

Arch!
As I already explained you in my last letter it's not necessary to use absolutely the same colour of camo uniform for 1 person. Actually 1 person could wear a camo set of different tints, because uniform could be made in different time or even in different place. And as soon as soldier or officer had different size of uniform, headwear etc, he could receive all these patterns in different tints.
Also the summer sec can be received at an early stage of service. Also summer patterns and winter patterns have the different period of use. So there are a lot of explanations about a little difference in camo uniforms you obtained.
I'm also not sure where you got information about Scorpion unit. But it was not a part of Border guard.

Sarbaz!
"2. Kepi is carried soldier and sergeant. The Officers carry another. This kepi cheap, plastic tape, not for officer"
This is a regular, fabric, official cap for officers till 2006-2007. So the difference between officer and soldiers cap for this type of caps - just in a cap badge. If you are talking about plaited cord, usually made from me same material as a cap - it's a special order of officers usually for more higher rank.
"4. The Signs on collar - too plastic (the bad sign) Plastic signs carry only undermost. The Dear officer of the big rank never will carry the plastic - only metallic signs. Instead of plastic stripe - a needlework stripe."
Plastic branch insignias can be used by any soldiers and officers till the rank of colonel. I've seen a lot of lieutenant colonels and colonels who used plastic BOS not only a camo uniform, but also on ceremonial uniform as well.
"5. Name plate - never no beside Uzbek army. The blood type carry On this place. "
In some periods of time such tab was in use, especially if officer took part in military training abroad.
"7. Paratpoupers carry other type of the camouflage - this never was used. its carried service troops."
This type of emblems were used not only in Abn units, but also from time to time in National Guard, Special task unit "Tiger" and as I was told in the Battalion of special operations of the Ministry of defence.
zvez

Welcome Maksim!!
Glad you could join, you may find many collector friend here that can help your collection!

Thanks Chris!
Sorry for spam

, but I really need a help to improve my collection, because I had a very poor trade last year.
Camosaurus

Welcome to the board Maksim! Nice to see you here! We have done 1 trade in the past and was very happy with it. Hope we can do more trades this year!

I can absolutely recommend trading with Maksim, I've done a dozen or more trades with him over the years!
Chris
Sarbaz

Max – and this officer-builder – too terrible Rembo-member of SF? Probably "Tiger"

to itself a cage.
Ask sellers whence they take such camouflage.
By the way – look at a headdress of the officer – it differs.
Max – show though one photo of the officer with such official kepi on a head. And I will show you 100 photos from a kepi which really carry.
You can show the official order in which is written that it is possible to carry?
Sarbaz

Misters!
It seems to me that dispute starts to depart from the source and passes in discussion of thin details of carrying of a uniform in general.
First - Maxim very good expert. But it does not mean yet that I bad

Secondly - let's give to Maxim time, it now is out of the house, hence is torn off from archive on the the computer.
Thirdly - as we each other well know, we can discuss this question among themselves and take out the definitive the decision on a forum.
kursant

Are you sure that this officer is builder? I cant see well if he has a military builder’s BOS on his rank insignias. Also you should know, that till 2007 it was a terrible situation with camo in Uzbekistan and every officer could get any camo pattern for his uniform.
I've just noticed that rain patter was a uniform for Abn, etc.. but it doesn't mean that some other officers wasn't able to use it instead of "mountain deserts" pattern.
About cap. I told that this plastic cord is for regular, fabric, official cap. And if you know, the type of cap on the officer on your photo - is not fabric. It was an individual order of officer. So no any comments.
Here is the photo of officer in real fabric made official uniform. It was taken from the site http://znaki-uniforma.narod.ru.
I have official order, but as you know I don't share such type of documents. And actually I don't want to prove anything to anybody.
I don’t want to show that Sarbaz is a bad trader or expert, I've just wanted to show real situation concerning this set of uniform.

And I'd like to repeat again that this type of caps was regular, fabric, official cap for officers until 2006-2007.
Sarbaz

The builder – because so it has been written in article under this photo. You can show me signs on the Uzbek builder on epaulets? And I too am not assured that the shown person on your photo – the officer. I do not see well its epaulet.
ОК Maxim – we will stop discussion on this theme and we will return to a uniform shown NKOMO. Two More questions:
1. If this cap the officer why on it there is another badge?
2. What kind SF carries on a collar signs para? If it para – why is not present other stripe?
Sarbaz

I have understood it. I show you a photo of the same period.
kursant

Sarbaz wrote:The builder – because so it has been written in article under this photo. You can show me signs on the Uzbek builder on epaulets? And I too am not assured that the shown person on your photo – the officer. I do not see well its epaulet.
ОК Maxim – we will stop discussion on this theme and we will return to a uniform shown NKOMO. Two More questions:
1. If this cap the officer why on it there is another badge?
2. What kind SF carries on a collar signs para? If it para – why is not present other stripe?

1st. This cap is not only for officers, it was the cap for all categories of military man. If you remember, even soldiers wear such cap in the late 90-s. The difference was only in the cap badge.
2. I'm not sure that I can understand your question.
CollectinSteve

Great information! Maksim, welcome! I also did two trades/sales with Maksim a while ago and was very pleased with everything!

I found this tonight and found it topical. One shot of a soldier in rain camo, another in VSR, and a third in what appears to be late Soviet Afghanistan issue khaki:

Dear Arch!
I've looked at the pictures of the uniform more carefully.
And I discovered that there is a sleeve patch on the summer jacket and breast tab on winter? Am I right?
It's really strange, because usually it shouldn't be any insignias except rank insignias on winter jacket.
But anyway, you can make some changes in the uniform, to create a really good camo set.
nkomo

[b] Thanks for the input fellows. This uniform set is quite an enigma. [b]
_________________
Always looking for Central American militaria 1965 to 1991. Especially items relating to Coronel Velasquez El Salvador Armed Forces
kursant

Actually after coming back home I can try to find a picture to show official pattern to compare.
And then, if you want, you can change insignias...
nkomo

kursant wrote:Actually after coming back home I can try to find a picture to show official pattern to compare.
And then, if you want, you can change insignias...

kursant wrote:Actually after coming back home I can try to find a picture to show official pattern to compare.

Finally I’m at home. Now I can share some information from my archive.
As I promised, here you can find an ideal set of fabric officer camouflage uniform (summer jacket). This collage illustrates the uniform set according to the regulations till 2006.
1. Sleeve patch of Armed forces
2. Breast tab of Blood type
3. Sleeve patch of branch (service), unit, military establishment etc.
4. Breast tab of Armed forces or branch (service)
5. Collar badge
6. Cap badge
Patch 3 can be successfully removed from the uniform, because not all branches and units in Uzbekistan Army have their own sleeve patches. Also officers can wear branch (service) tab on the right sight of chest.
But I should underline that it was hard enough to find officers in such uniform because a lot of them infringing all regulations wanted to wear special uniform to differ from other officers.
Arch, about breast tabs on your uniform. Such kind of breast tabs was usual for officers and sergeants who took part in international trainings, and they wear tab of UzArmy on the left side of the chest, and Name tab on the right side. 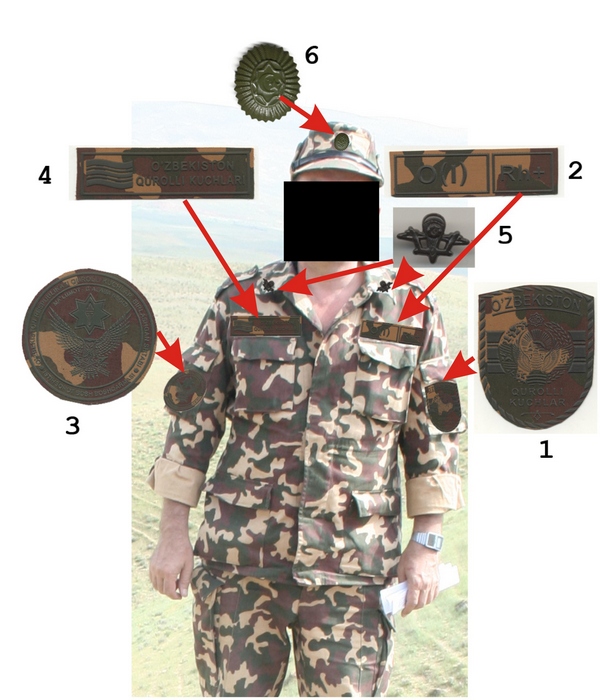 Arch!
Now about cap badge on the cap from your camo set.
Looking through photos, I found some photos with officers wearing soldiers’ cap badge on their headwear. So, it’s possible… 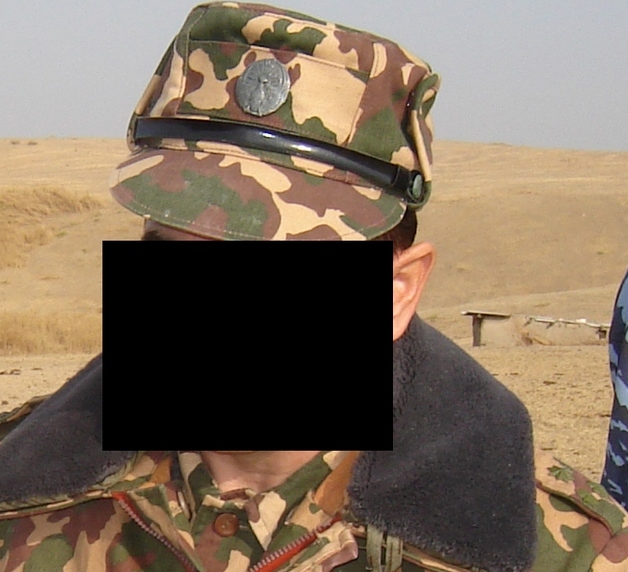 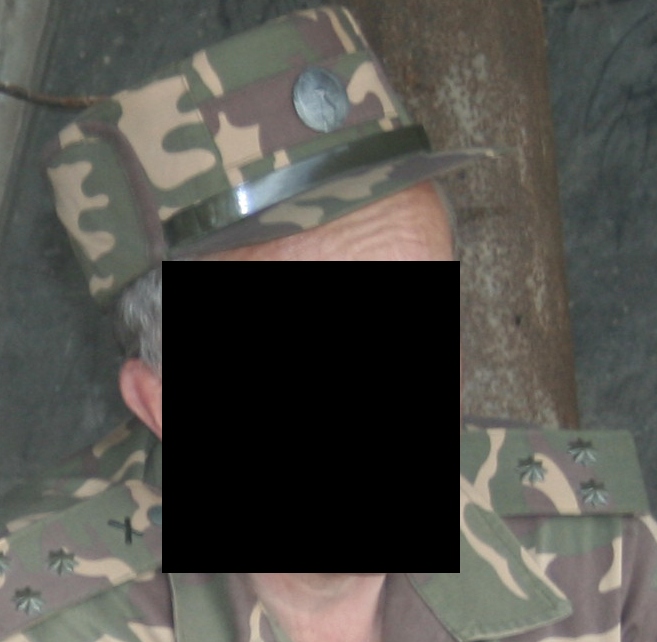 and here is the photo of 2 caps with officers' badges. You can see that 1 cap is fabric made and the 2d one is made buy individual order, but both of them have authorized strap. 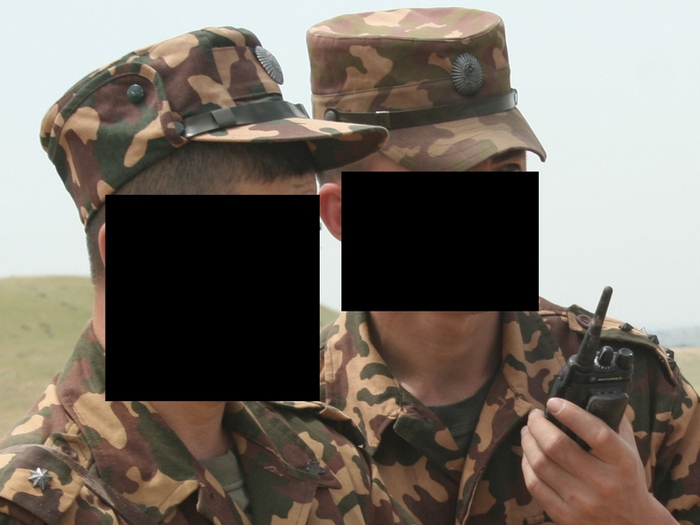 Love that camo , I am going to find a set some day !
Sponsored content